I know that I have an entire robot event to report back on. In fact, the robots have even had time to arrive safely back to MIT.

I know that I already have an electric scooter build that is in process and which features a design paradigm not found on most scooters extant today. You know, one actually worth building.

… but some times I just want to build something dumb but awesome. After all, it’s not like that’s never happened before to me. Most people in academia would probably argue that’s all I do anyway.

So let me tell the tale of the Melon Scooter, which has been occupying my time for the past few days.

The story of Melon Scooter actually begins last summer. I received a Sharper Image Electric X1 scooter as a “I heard you collect shitty scooters” donation. This vehicle is in fact so old it predates the Internet, or at least Sharper Image user manuals and documentation. 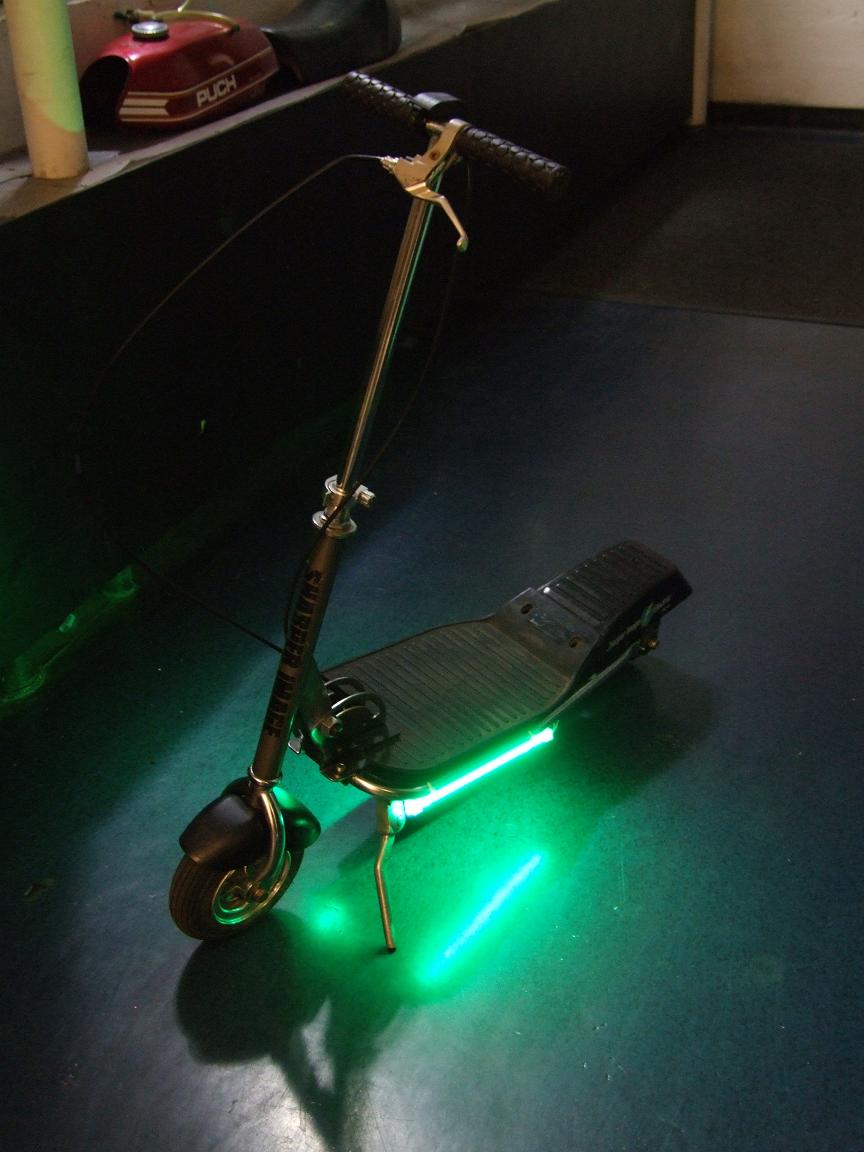 With a little elbow grease (and green underbody lighting), I threw the thing back together and it became my daily commuting vehicle for most of last summer. It featured a fairly generic, basic parts lineup. A shady 700 watt BLDC motor of unknown history, the 100A Turnigy controllers I am so fond of, and the lithium battery pack which eventually became the Fankart pack.

Semesters came and went, and the Heap Scooter, as it was known, was decommissioned, recommissioned, returned to DC motor power, stripped of DC motor power, and generally was heap-y. Finally, this past summer, I recommissioned it again as a commuter vehicle around campus. It used the stock 24 volt DC brush motor, but overvolted via lithium battery pack. It wasn’t powerful, or remotely deadly, but it was reliable and steady – something that I’ve never really had in an electric vehicle that I’ve built. LOLrioKart is reaching those stages, but it’s not exactly portable either. The Heap lay on the borderline between what I would call “portable”, i.e. parkable indoors, and “way too big”.

The trait that I found most pleasing, however, was the big pneumatic tires and huge steel frame. I could curb hop on this thing with impunity – and did, regularly. If I tried that with RazEr… well, no, I have before. We know what happened there already. The big tires meant I could blaze down the pothole-paved streets at top speed, and generally go places that the small scooters couldn’t. But I wanted more power. It took 10 or 15 seconds to reach steady state, and that was maybe 15 miles per hour. Barely faster than the average bike ride. It just didn’t have tire-shredding power or wheelstanding torque at all.

I thought about modifying it from the very beginning, but the curved steel tube frame was not spacious nor particularly amenable to modifications without major cutting and rewelding. The motor cavity was designed to only fit that stock DC motor.  An expert at welding or tube frames could have chopped and screwed it in 5 minutes, I’m sure.  So Heap-scooter continued to be heap-y.

In the same heap that Heap-scooter resided were two “Sunl” type cheesy electric scooters that, once again, were “I heard you build scooters and I have this total piece of junk that you can have” donations to MITERS. 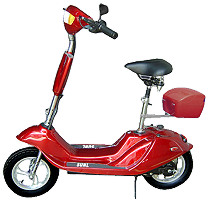 I don’t understand these things at all. They’re not  something I would take anywhere near a major street, but they’re too big to just zip down sidewalks with. It’s like if you took a real roadgoing motor scooter and let 5 year olds (or the Chinese) rebuild it.

But anyways, we had two of them in the pile, taking up space. And they kept falling on me when I was trying to extract LOLrioKart.

And so I finally cracked one day and parted them completely down. This was convenient, because underneath the shitty blow-molded plastic shells were rectangular steel tube frames.

First addressed in a Fankart post, the Turnigy 80/100 is the largest second largest ICBM (Inexpensive Chinese Brushless Motor) that is easily available for purchase by the average electrically-minded citizen. 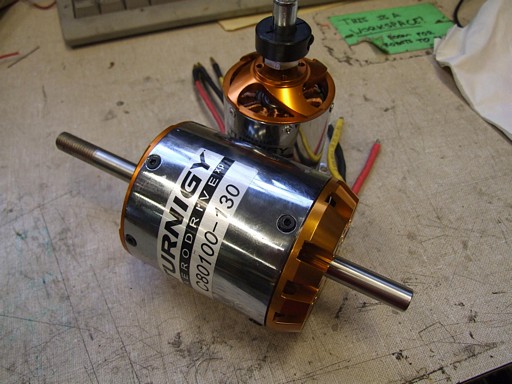 This thing is the size of a small melon – as reflected by its nickname. When sensored and driven appropriately (often after being rewound), it has been known to return 4 or 5 mechanical kilowatts – that’s a power input of at least 8-10 kW. By pure impulse, I bought two when they were (finally) in stock.

So what happens when I am brought near a large brushless motor and a scooter frame? Like an enzyme, I start assembling the two.

Now I can finally start taking about it instead of the backstory. After stripping down both scooters, I discovered that they had flat steel tube frames. Much, much better (and easier) for mods than the curved round tube frame of Heap-scooter. 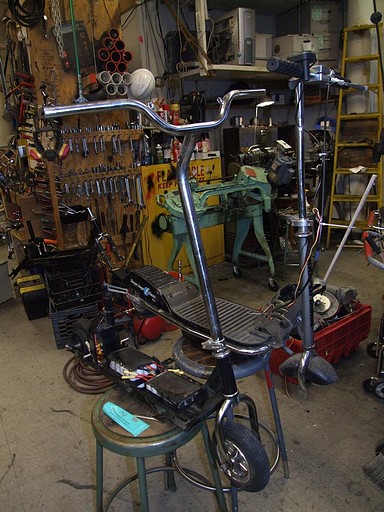 For eyeballing purposes, I dismounted the front wheel off the Heap and pitched it on the scavenged frame. Now, it’s actually designed for 12″ wheels, but I felt that 12″ wheels were too large, and mentally it put the scooter in the “too big” category. With 8″ wheels in the same forks, the thing looks just a bit silly.

Also, epic handlebars for the scooter-win. 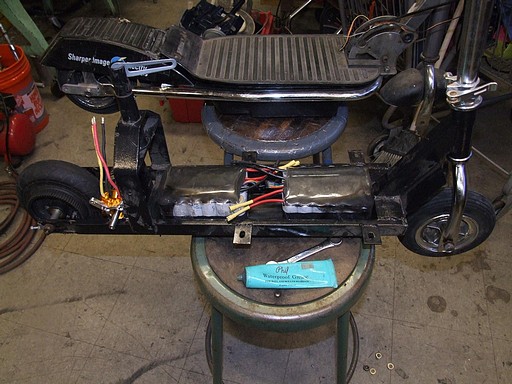 Here’s the anticipated power setup. One melon and two \M/ETALPAXXX. This thing is essentially Fankart in a scooter, minus propellors. Admittedly, it would be much more fun with propellors.

The picture illustrates the similarity in wheelbase between the Heap and melon-scooter. 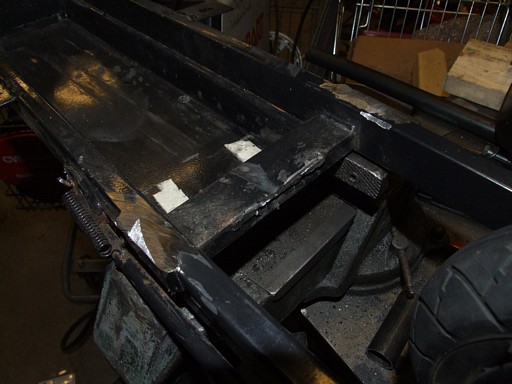 The first operation I completed after sizing things up by eye was removing that seat post. Sorry, but melon-scooter will be a stand-up vehicle.  This involved a bit of ninja angle grinder work, but things came out smooth and flush. 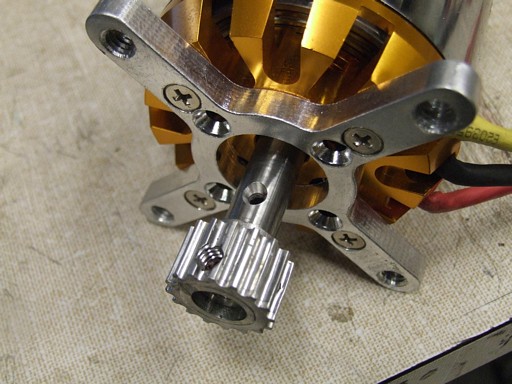 By sheer luck, I recovered the original motor pulley from Snuffles the First.  Remember that thing? Half of its build report pictures are broken since I switched servers, but this one is still around. That motor eventually became Deathrunner.

And so my scooter building comes full-circle. May the spirit of Snuffles the First bless melon-scooter in its journeys.

(Does this mean I should move on to building more meaningful things? Nah.)

The set screw in the motor pulley seats in a cross-drilled indent. 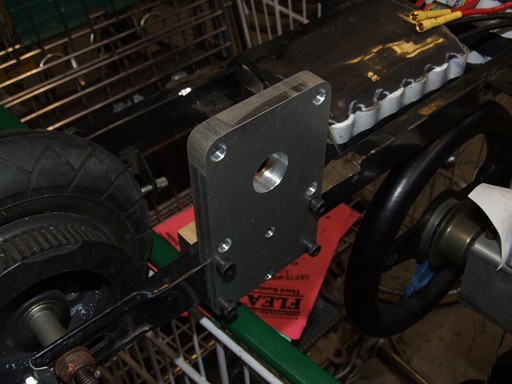 Such an epic motor like the Melon needs an epic motor mount. I whipped up this clamp-mount design in a few hours (machining included). I originally designed it to be waterjetted, but hell… it’s a slab of aluminum. So, this is one of the first parts in a while which I have legitimately machined from start to finish. The mount attaches to the frame using clamp bolts. It can slide forward and back as needed, so I can tension the drive belt.

The mount is extremely overkill, being made from 1/2″ thick aluminum. There’s an almost gratuitous amount of metal going into this thing, but in Snuffles the First the motor had vibration resonance issues because of its very non-stiff mount. So, this is just gross overcompensation. 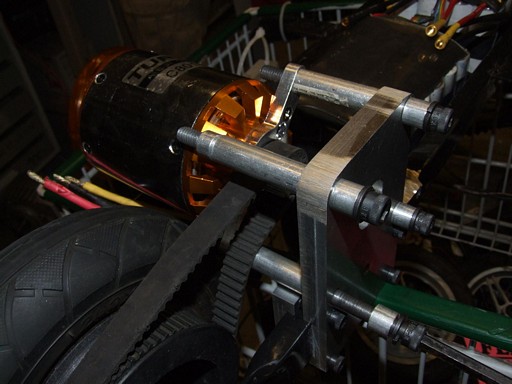 The Melon mounts like so. I threaded the holes in its cruciform mounting base and am using it to sandwich standoffs of the appropriate length. 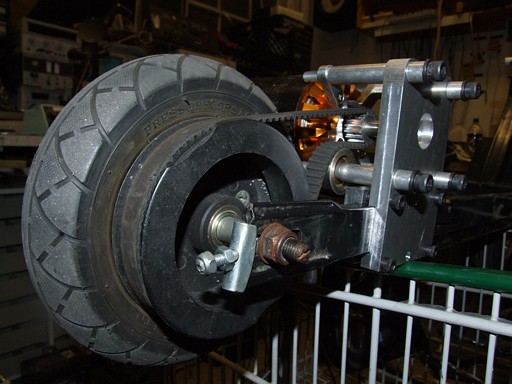 Some exploration in the “Bearings and Gears” bin uncovered these little flanged rollers, which fit the belt width almost perfectly. They even had a 5/16″ bore (for my 5/16″ bolts) and a ball bearing center.

And so one became a belt tensioner. The added benefit of this tensioning arrangement is that the motor pulley has almost 180 degrees of “wrap” for maximum power transmission ability. 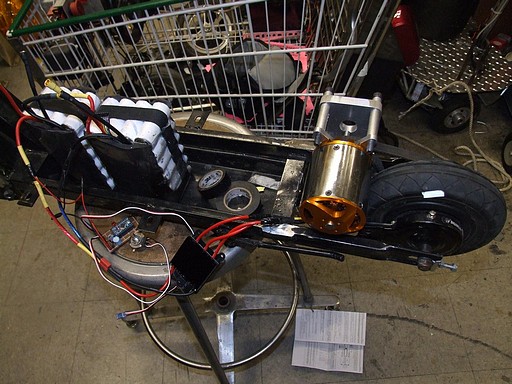 What’s left now that the drivetrain is essentially done? Test.

Out comes a Turnigy 100A controller and the ninja analog-to-RC interface. Here’s the test video, a “dry run” spin of the motor. As geared (and confirmed by a laser tachometer) the top speed of this vehicle should be about 25 to 28 miles per hour. 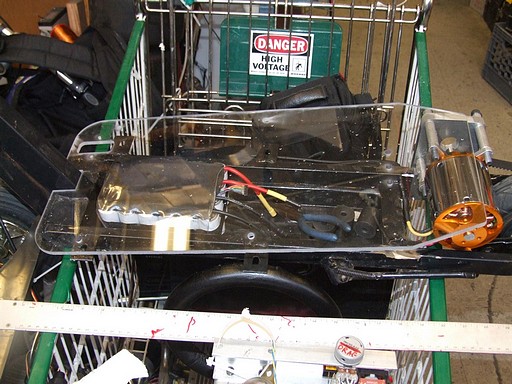 I faced a bit of a quandary with the new frame’s deck. The batteries stuck out about 1 inch over the top of the “bucket” that held the stock lead batteries. While I think the \m/etalpaxxx are pretty well-built for a battery pack, they are most definitely not structural. As such, I’d have to fabricate a “frame riser” before I can attach the deck.

Oh, speaking of the deck, it’s that chunk of 1/4″ polycarbonate up there. Waterjetted, with included frame bolt pattern, cutouts, and a hole for an Epic Switch. 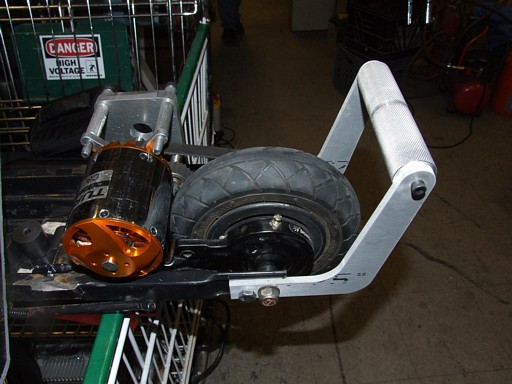 Did I ever mention that there’s just too much metal on this?

I admit that I think the wheelie bar is just a bit overboard. I might have had a spare section of 1.25″ diameter aluminum standing around, but that doesn’t mean I  had to use ALL OF IT.

Actually, I did. That’s how the wheelie bar is a solid chunk of aluminum 5.5″ long, knurled for dramatic effect.

The brackets attach to the stock frame through the existing wheel forks. I’ve replaced the threaded hangers (originally for tensioning the chain) with this solid mount. So the rear wheel is effectively fixed in position by the hex head screw protruding on the left of the axle. Belt tension is then adjusted using the sliding motor mount. 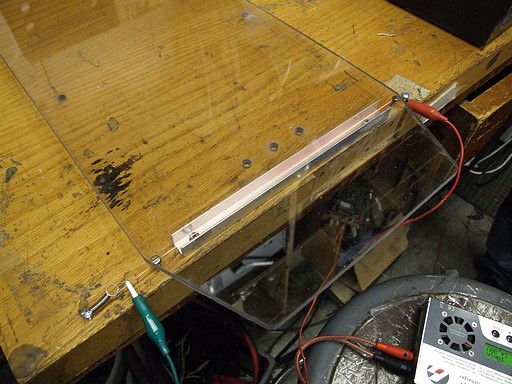 Inspired by a plastic bender by that guy of roughly the same name, I pitched together this hot-wire heated plastic bender with some runs of #36 Nichrome wire (8 passes), a spring, some screws, and scrap aluminum channel.

You’d notice that the deck polycarbonate sheet is too long to actually fit in the deck section. That’s because the back section will be bent up 75 degrees to present a physical  barrier between me and the motor when it’s in operation.

Cold bending polycarb like this is just a sickening *SNAP* waiting to happen. I felt like that brute-force heat gunning it was just going to be too messy. And so Dale’s solution presented an easy way to locally heat the plastic sheet across the bend line. 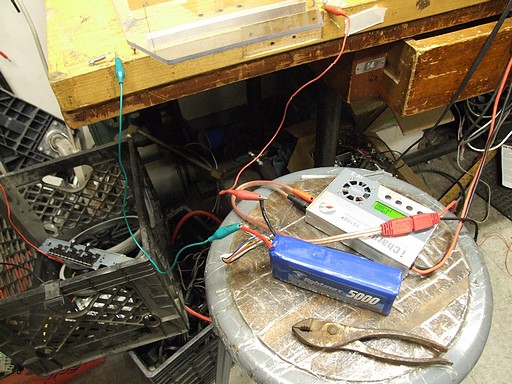 Oh, yeah, this is the power supply.

No. Not my charger – the mildly bulgy lithium polymer battery there, connected by raw alligator clips.  As it turns out, 16 volts flows about 4 amps through the wire, which caused it to glow bright orange. Not enough to destroy it, but also enough to heat up the plastic well. 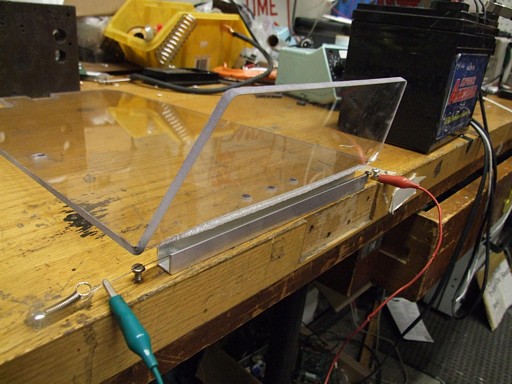 After about 10 minutes of sitting and watching plastic bubble, I began the bend.

Really I should have built the heater much wider, but I couldn’t find a longer piece of channel (that wasn’t huge). So there was some difficulty in getting completely consistent heating at the edges of this piece, but overall it came out fine. 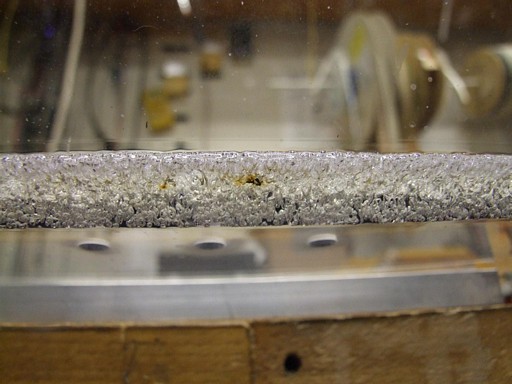 I call it WHATEVER, I DON’T CARE. IT’S NOT STRUCTURAL ANYWAY. 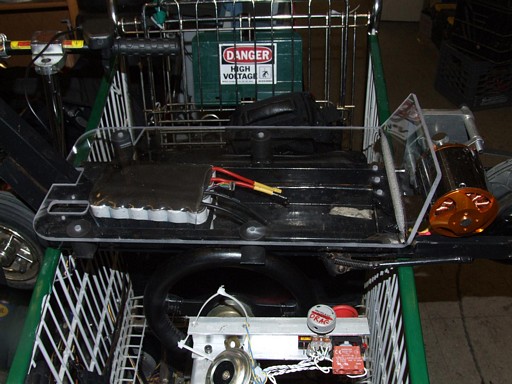 Here is the completed deck on its spacers, which I cut out of some 1.25″ diameter glass filled nylon (not on purpose – I thought it was Delrin). This design might change later, since I really do want more surface area contact between the polycarb and the frame. Plastic doesn’t take kindly to point stresses.

Also, I mis-placed the three holes at the back. They should have been right over the steel frame, but instead are about 1/2″ out. Another plastic block is intended for this gap, since without it, the back of the deck has no structure whatsoever. 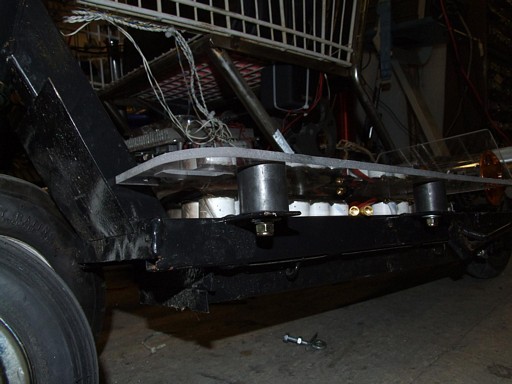 The deck bolts through the spacers and into the frame.

While this arrange has supported my weight through a few static bunny hops, I don’t consider it very durable since the plastic is attached through so few points. 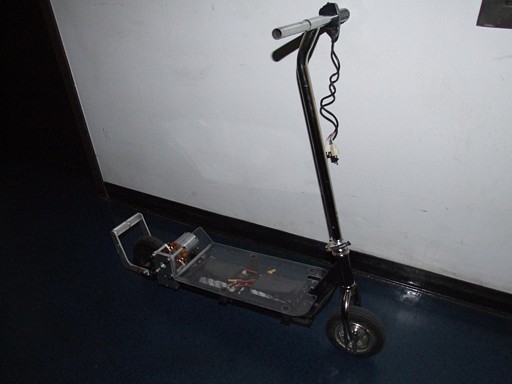 Here’s a beauty shot of the mostly done melon-scooter. I have yet to think of a clever name for it.

Alright, so what am I going to do about controlling this thing?

I have several options that have been turning over in my head.

Knowing me, the next post will be about how to control this motor with a relay.

One thought on “Melon Scooter: Yet Another Dumb Electric Scooter Build”