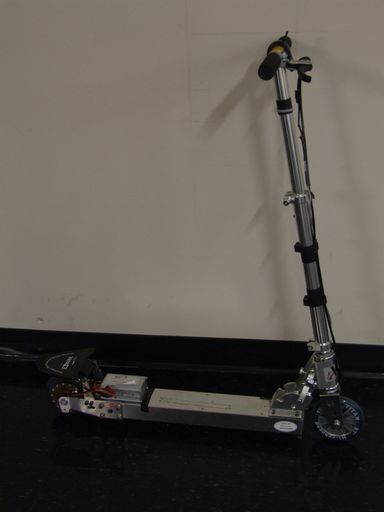 Short story regarding the name: Someone named John left behind a scooter frame in MITERS, intending to work on it, but alas, he never returned.

Which is where I come in. Kitmotter 0002 was in desperate need of some actual vehicle testing. The frame of Johnscooter is a “FX-1 EZ Rider”, which is quite a mouthful given to something which does not evoke the imagery of “easy rider” at all, really. However, it was very amenable to hub motor addition – the rear forks were easily rebent to accommodate the width of Kitmotter 0002, so conversion was painless and no other parts of the vehicle were modified at all. The scooter has its original battery pack, which is actually an impressive 230Wh brick of NiMh cells at 28.8v nominal. A Jasontroller was used to get the rig running quickly.

Johnscooter will likely be the test base of future Kitmotters to come.