They have a new thing!

This means I can just buy it, wall it off, and point a hair dryer into it, right!?

As for The Next 3D Printer, I’ve been slow in finishing up the model because of a self-imposed lack of funding. I never like putting myself in debt working on personal projects, and have decided to take the month of IAP off to remove some of the “DC average” on my credit card built up from fall projects. There’s still about $200 in linear motion hardware, $100 in metal stock, and $400 to 200 in either MK4 or RAMPS control system (depending on which route I choose… oh yeah, not finishing the CAD until I know where the electronics are going is another factor).

In lieu of pursuing new things given that constraint, I’m probably going to keep trying to get tinycopter flying and when it finally snows some day (seriously?) I can finish working on the board controller for landbearshark. Otherwise, 2.007 work will also keep me entertained.

Seriously! I will poop out a new 3D printer by the end of IAP. Now that the holidays break is in full swing and everyone else is gone, I can focus on actually finishing up the design, rather than, say, be constant distracted by things happening at MITERS. I pushed out several orders for materials (including something like 30 square feet of acrylic sheets) and more mechanical parts before the Christmas Everything Shutdown, so hopefully I’ll have all materials in hand come January.

In the mean time, here’s another week or so of on and off work, including testing of the space heater platform and design of the XY gantry head. First, some more waterjetting which was not covered in the last episode. 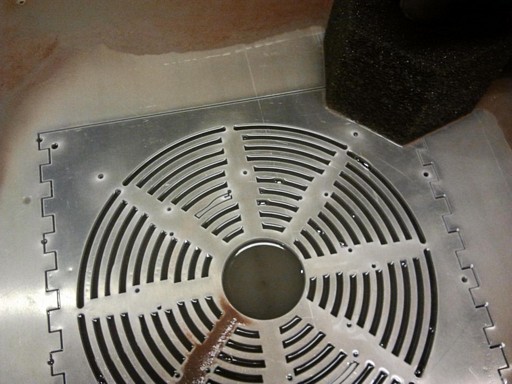 I think I have made my first impossible-to-cut part. The heater grille has so many little things that can possible stick up into the machine path that, even with careful manual routing, I was unable to avoid interference accidents. And no, it does not have a powered Z axis so I can do head-lift traverses. I’m not that spoiled yet.

After writing off this piece, I tried again, but this time routing the machine to cut out everything but the little grille bits, then doing those last. That way, I can still have consistent mounting dimensions – who cares if the grilly bits are misaligned slightly? To make sure the piece didn’t float away after the separating cut, I inserted small tabs periodically to hold it in place: 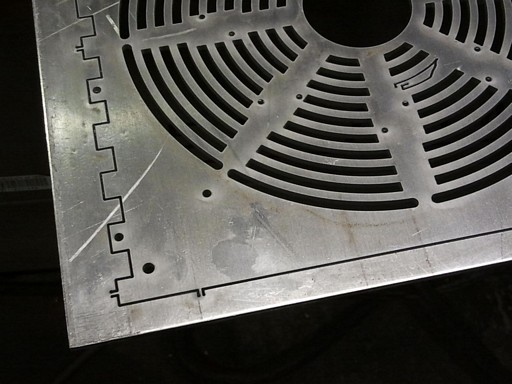 I used a chisel and hammer to shear off the small tabs to separate the part. As can be seen, there was one bangup regardless, and there are parts of the resistor mounting holes which come close to the material edge as a result.

The proper method would have been to individually tab each one of those vents, and to manually route the path to start and stop on those tab cuts to minimize nozzle cycling. I wasn’t that patient. 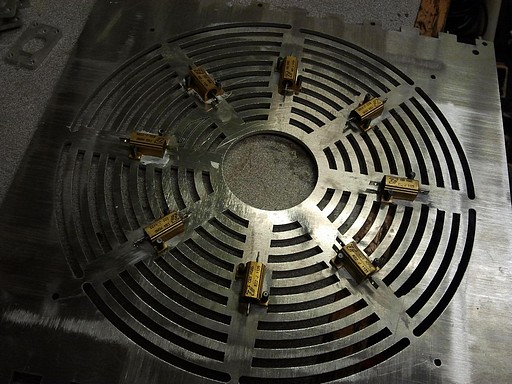 0.22 ohm resistors mounted with a bit of thermal paste. I found out that no bolt head in existence fits in the little mounting tab given, so I had to drill out all of those mounting holes and actually tap the resistor’s aluminum body with M3 threads. They seem to work fine. 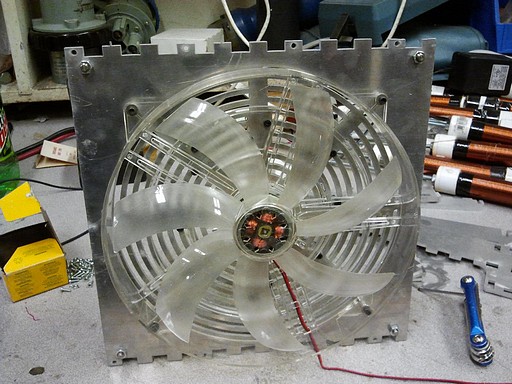 I actually bought one of those huge case fans seen in the Z platform models from xoxide. Actually no – I got 2, one to mess with and one to actually use, as per standard operating procedure. They move reasonable amounts of air for their size and low speed, and are indeed very quiet. The actual fan diameter is about 220mm – I found out which dimension is actually 250mm on these things, and the answer is the corner to corner measurement on the outside of the mounting tabs. Failsauce noodles. 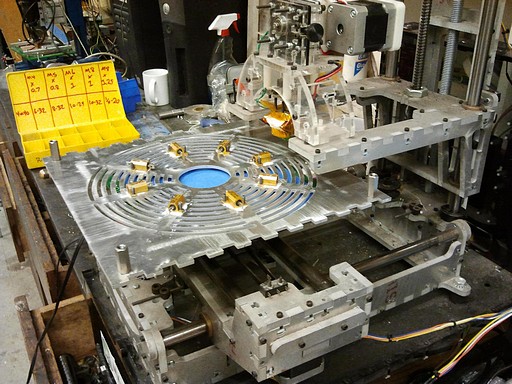 Check out the new platform on top of MaB. This thing is going to be enormous – the standoffs mark the bounds of the build plate, which will be 250 x 250mm.

The big question after putting together the platform with wired resistors is whether or not it would dissipate the watts needed to bring the internals of the machine up to a high temperature. Fanning the resistors at room temperature showed that the 1.76 ohm arrangement (8 0.22 ohm resistors in series) isn’t very powerful at all. It draws about 80 watts, but it’s difficult to feel warm air even an inch away. Probably because the resistors are very, very well heatsunk and I just installed the sexually dimorphic father of all computer fans (this is the larger female of the species)

But future-MaB wasn’t going to be heating things up at room temperature – it’s going inside a box. For true thermal testing, I needed a box. 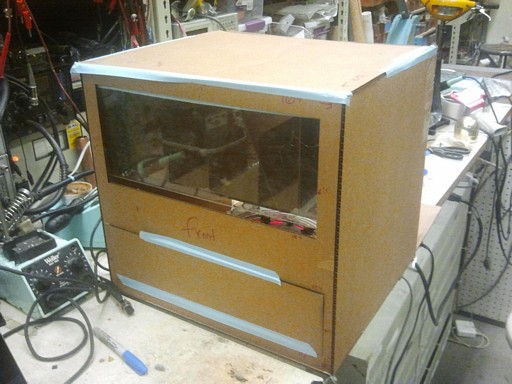 In this picture: a box

Conveniently enough, a box of essentially the right size was standing by.

I commandeered this early prototype of an arduino vending machine project by a certain Nancy (who is currently stomping it out in Asia – make sure to keep up with her blorg). It’s made of cardboard and very much glued and taped together. But hey, that’s all I need.

I actually love this form factor, by the way, so don’t be surprised if I just end up gluing everything to the inside of this 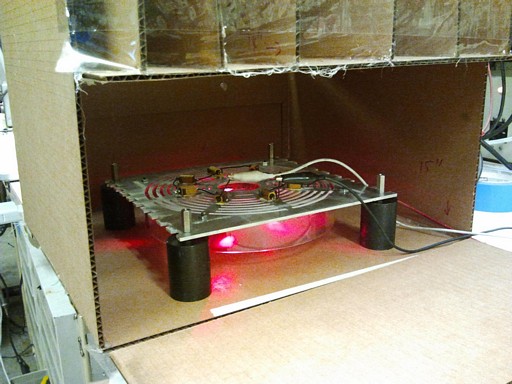 I stuck the platform on some big aluminum standoffs, hooked it up to 12 volts (uncompensated – I wanted a realistic simulation of losses in the wires), and closed the box up.

On the as-designed 80-watt setting, it was horrible. I think the temperature barely crested 40 celsius after 10 minutes, which is my benchmark for acceptable bootup time due to current MaB’s giant resistor board. Probably because the cardboard box leaks air everywhere and isn’t a good thermal insulator alone.  Sadly, I could not locate an IR thermometer (or even one of those stupid things you mount on your window… sadness), so the estimate is very much biased by my hand waving around in air, which given that I regularly act as my own soldering fixture, might be miscalibrated.

I went on Digikey and Mouser to see what the next value smaller resistor was available. I only have 8 mounting points, so I’d have to come up with a reasonable solution which was not just paralleling four resistors on each side of the board – that drew like 30 amps and was kind of insane. By going to 0.1 ohm resistors, I could get a power dissipation of roughly 180 watts.

The next step was to just pump up the power supply to 180 watts. When you’re just dumping into resistors, watts is watts, so the final setting turned out to be approximately 17.5 volts at the heater (the alligator clips eating like 2 volts on top) and 10 amps. This time, the results were much more promising. It certainly reminded me of the inside of a commercial printer, but again, without an IR or traditional thermometer, it’s hard to judge. I would estimate that it was over 60 celsius, but not with certainty.  I thought about hijacking MaB’s platform heater thermistor for a moment in order to get a good air temperature reading, but it was a little more work than I wanted to deal with at the moment.

The good news is that the shady case fan worked fine in the higher temperature environment.

My resistors are delayed due to the holiday break, but once MIT opens again briefly next week I should be able to get more testing done (as well as pick up a reasonable thermometer from somewhere)

I’ve been really lagging on the actual machine design this time, something which I took the past 3 days or so to address. The reason it took so long was that I… you know what, fine. I admit it. I’m a grad student. I spent more time thinking about different ways to design it rather than just merrily beasting along. Starting the first part file is always the hardest part of designing something entirely new, because you have to select yourself a ground point for the whole thing. At this point in the design, I was just aiming to have some kind of parallel gantry to stick Tinystruder to – dimensional adjustments and remodeling can come after I get a good look at everything. 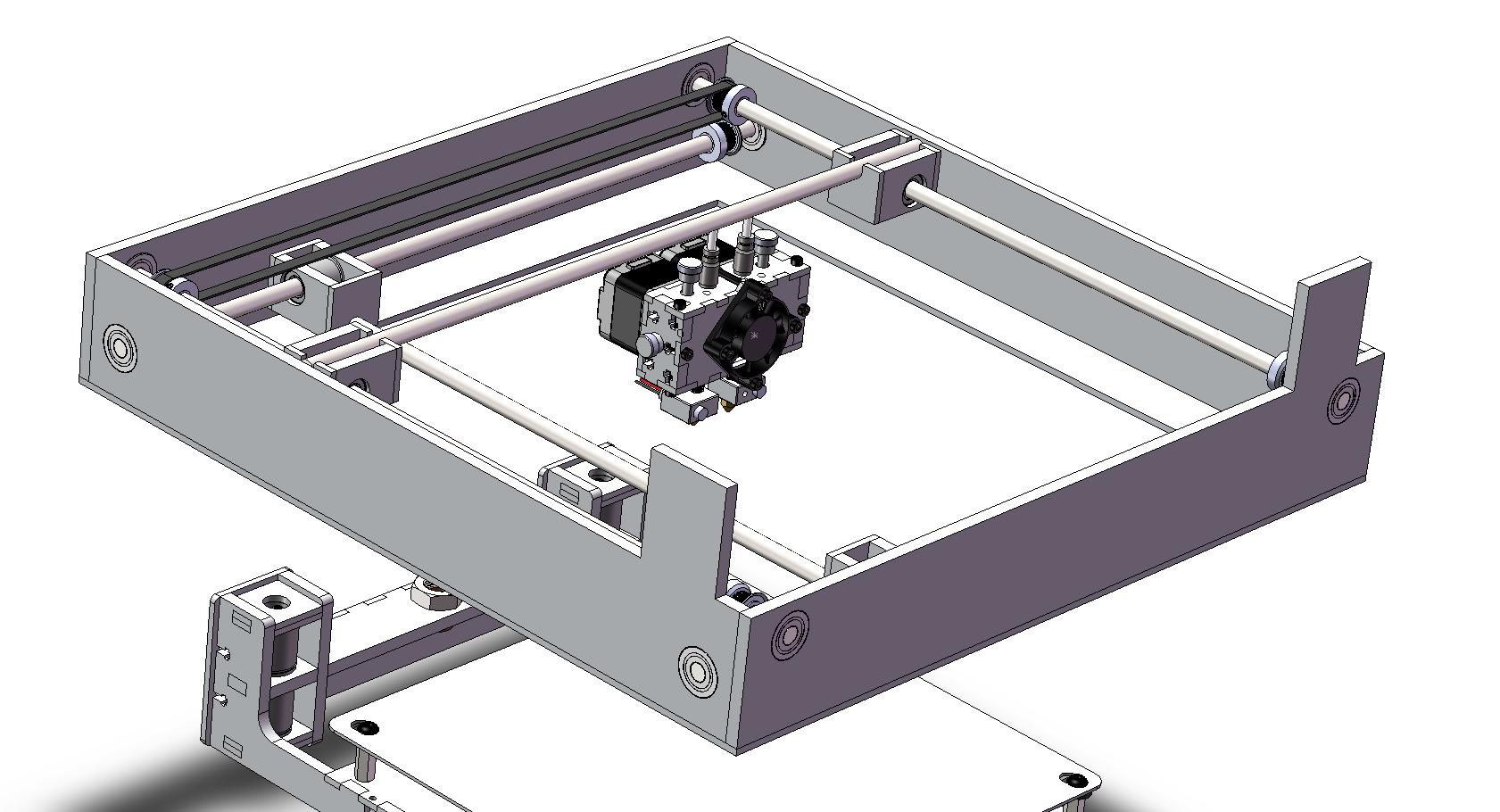 Here’s some of the “mechanical penthouse” solid geometry. I picked an arbitrary square size – in this case, 400mm, selected for me by the fact that McMaster sells 400mm long shafting. The pulleys were selected from B&B Manufacturing and SDP-SI (who seem to gun for eachother and have “competitor” part cross references that are exactly eachothers’ part numbers) based on both price and diameter – the pulley diameter determines how far offset the X and Y rods have to be. This part was relatively simple. 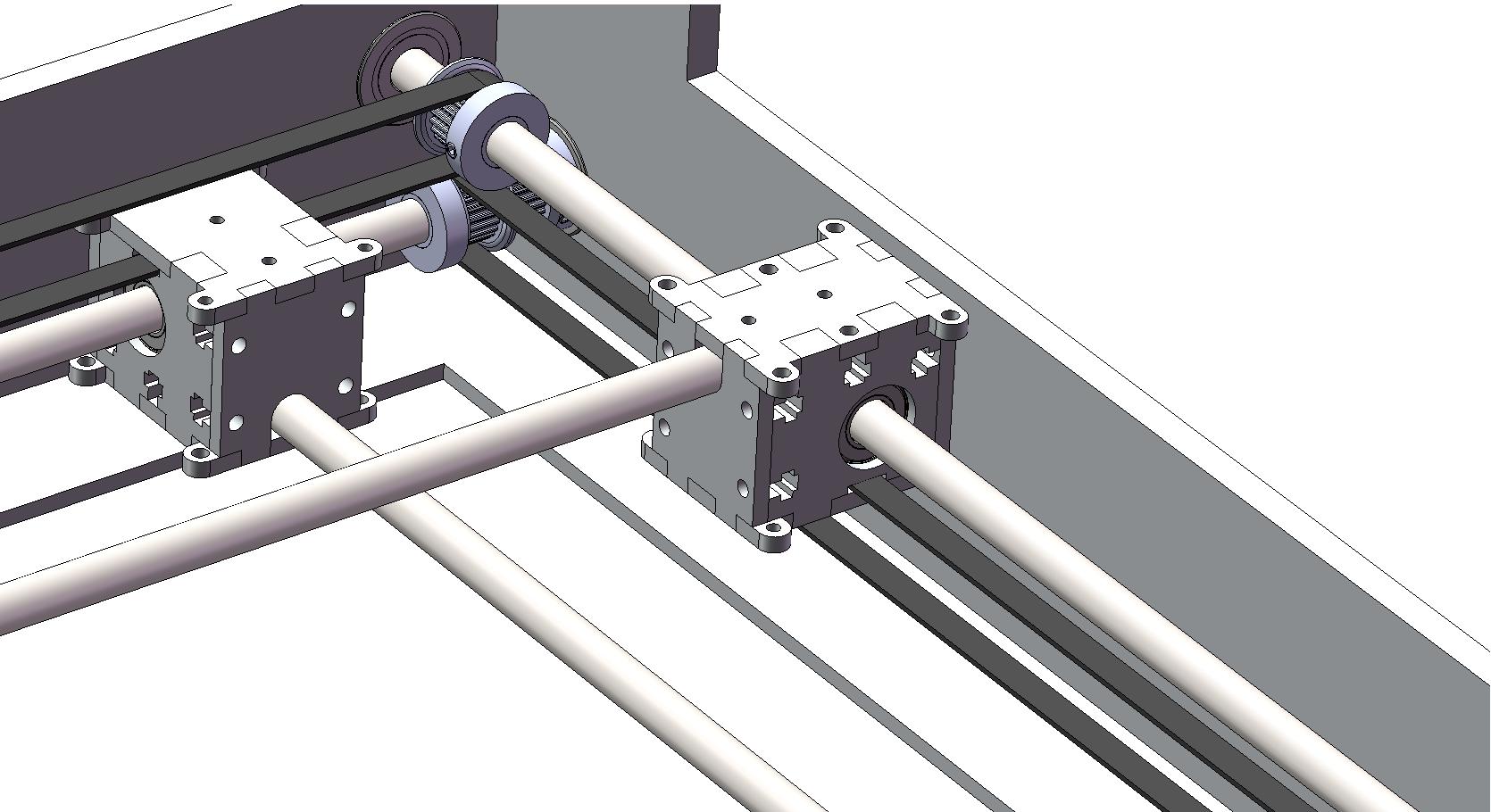 What wasn’t as simple was designing the axis anchor blocks. Above is the most elaborately t-nutted thing I’ve ever designed…but it sucks. It requires 4 unique parts to be cut, and a cube only has 6 sides. When you have a waterjet, everything looks t-nuttable.

But what was important was that designing this thing gave me the critical dimensioned I needed for the part. After that, I could quickly whip up a better designed replacement: 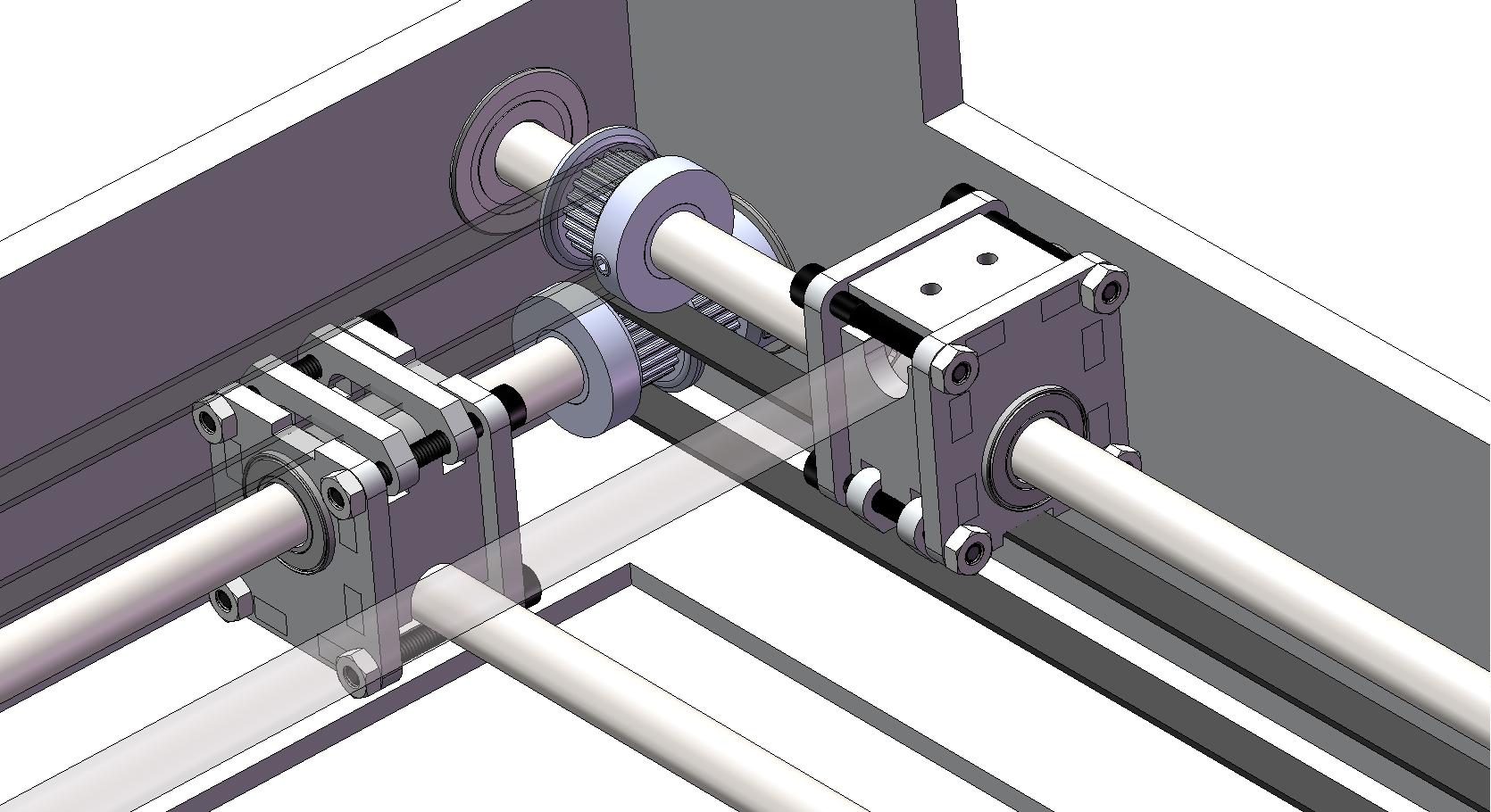 Some times, thinking outside the box isn’t the right approach – the box must be thought about from a different axis. This axis anchor design is much better executed, requires fewer unique parts, and is fully constrained by 4 corner bolts. It even has provisions for a real belt-clippy-thing on the bottom (one axis runs the blocks inverted for clearance, so the thing on the left is still “Bottom”). It’s also smaller.

I legitimately thought about just machining a block of aluminum for this – the whole assembly can be replaced with a small cube that has two holes in it. One to hold the linear bearing, the other to hold the cross rod. But that wouldn’t be in the spirit of things, now would it? 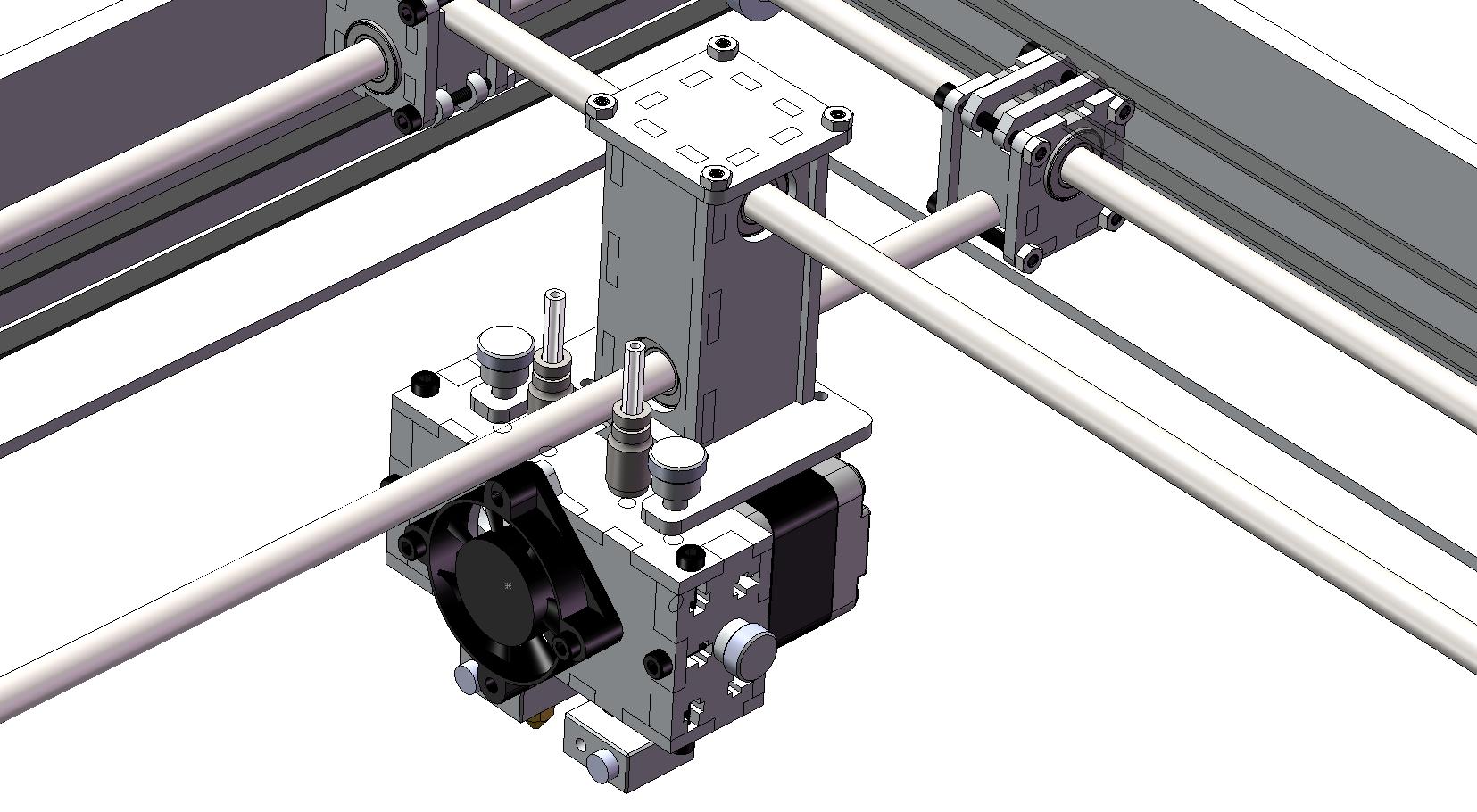 The general idea explored in the anchor blocks was applied to the head mount. Because my cross rods don’t start in the same plane as my axis guide rods (unlike, say the Ultimaker), the end effector is a little tall. The rod separation is 40mm. There was no particular reason why I made the rods offset instead of in plane – it was just the first thing which came to mind.

And possibly because skew-offset rods are easier to install, and that further-spaced supports for the massive steel and aluminum testicle that is Tinystruder means more torsional stiffness along the axes. 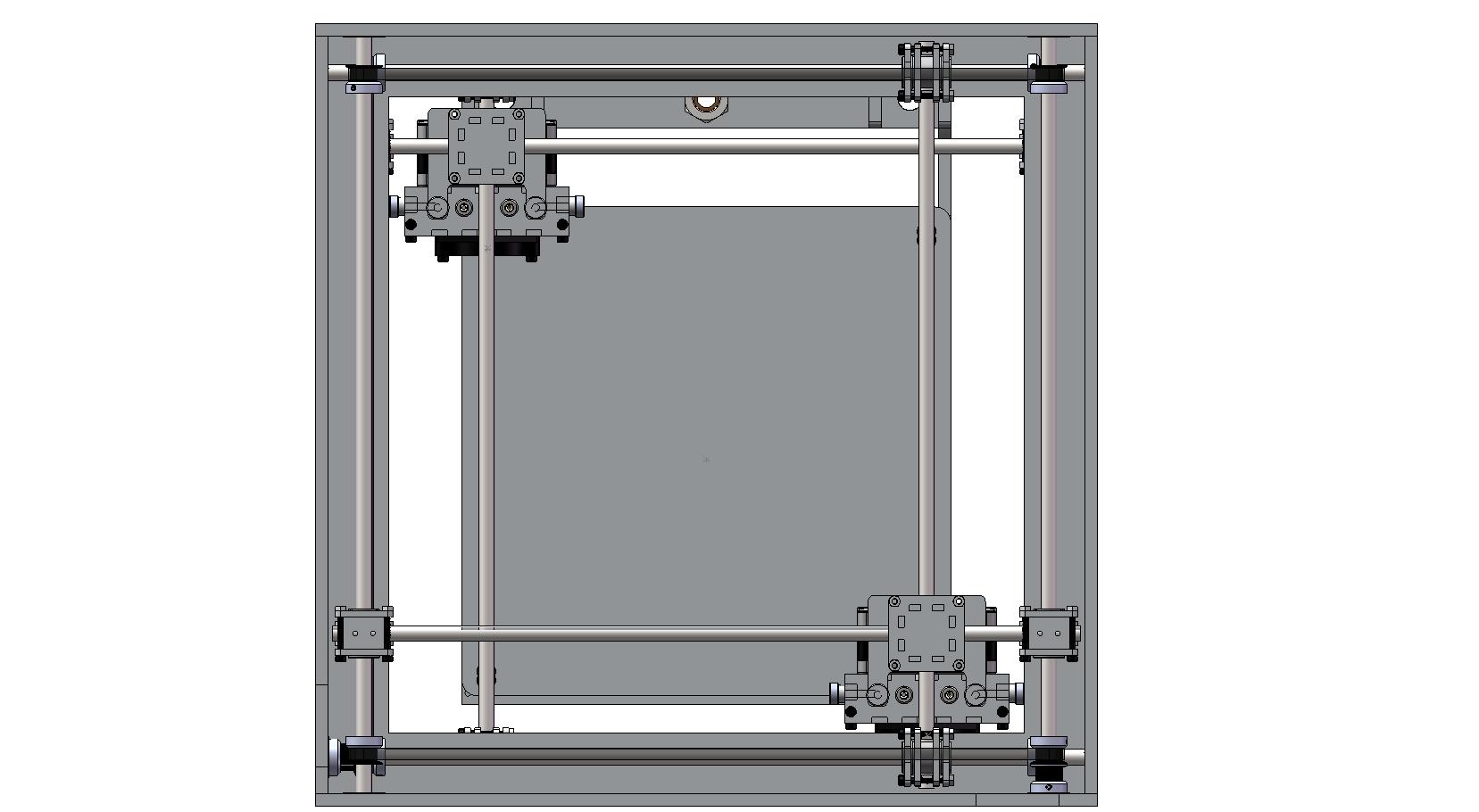 Because Tinystruder sticks out more one way than the other, the gantry can’t be perfectly centered upon the build plate. This is a composite image of the maximum positions that Tinystruder can travel to at the moment, centered upon the build plate i.e. able to hit all corners. However, this puts the Z-axis in a slightly inconvenient position (halfway hanging out of the square base), so I might have to extend the platform arms even more to compensate for it. Or adjust some other dimension, or make the build volume rectangular, etc.

Now that the hard part of the machine design (in my opinion) is done, I hope there’s nothing to distract me in the near future so I can finish it off.