I handed the RazErBlades off to someone who can actually skate, and as a result, they actually look pretty epic. Thanks Josh.

Now to build four more and find some more misfit friends so we can storm Anime Boston or something as the entire cast of our most favorite series featuring misfits with automobile skates.

To me, there’s no more magic in ultra-small mobility devices. Building the Death/RazEr/murderblades has shown that a handful of brushless DC motors and a lithium polymer battery is fully capable of pushing a passenger around at 10-12mph, which is a reasonable sidewalk speed. Extreme stealth is also possible –  RazEr was a miracle of packaging, but the skates beat it out by far in terms of volumetric component density. Additionally, I’m very satisfied with the way that the Skatroller turned out in terms of user interface – so much, in fact, that I might start making more vehicle throttles wireless.

Now that Otakon is over with, I’m going to start collecting more test data and video with other people who can actually wield the ‘blades and not look like dumbasses, unlike me. Anyways, here are the events of the last week or so. 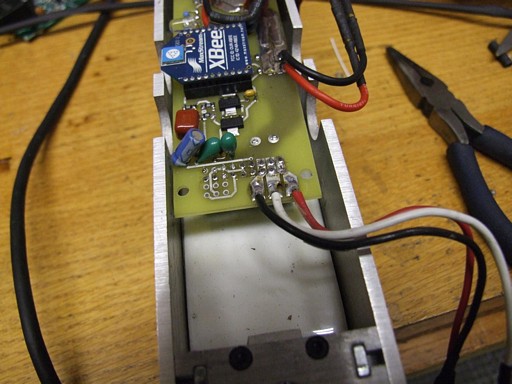 After I left the remaining skatemotors on a shelf to set, I began completing the left motor driver board. It was fundamentally “done” weeks ago, but I never added motor connectors because of the lack of motors. On this board, I elected to discontinue using side-bullets and on-board mounted sensor connector. It was too difficult to maneuver the cabling in the tight space, and the large power wiring directly pulling on the board traces worried me. So this board uses sensor and power pigtails that extend outside the aluminum frame. 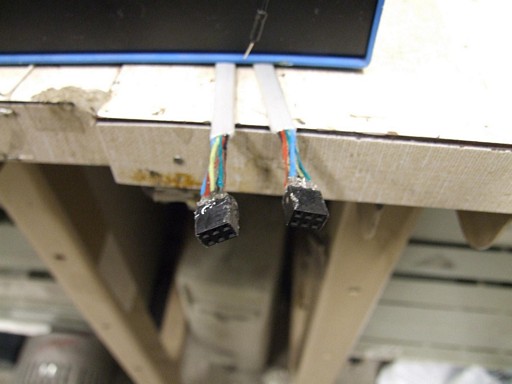 I put together the sensor pigtails using the same headers and 5 (originally 6) pin cable. A few globs of Goop sealed the electrical connection. 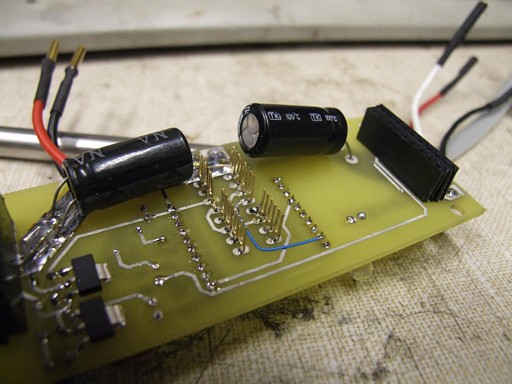 I had to flip the direction control pin on the left board also, since the motors were mounted oppositely to the right side and therefore wanted to run the left skate backwards. Unfortunately, there wasn’t an easy was to do this since the DIR pins were connected to logic ground through a circuitous (hurrr) trace that also hit several other pins.

Solution? Cut off the mating contacts of the signal header. I then hardwired the DIR pin to the DECs’ onboard 5 volt rail using 30 gauge wrapping wire. 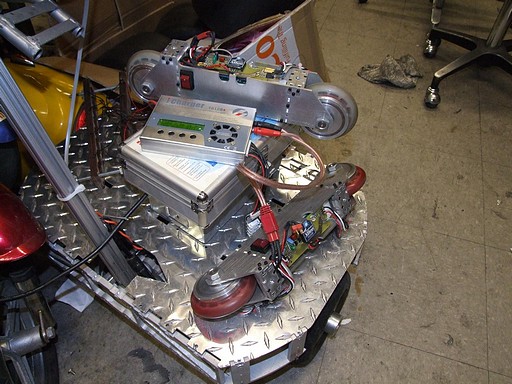 After the board was assembled and installed, I gave both skate units a full charge. It was the first time the left skate had been charged period, since it was never used before this. 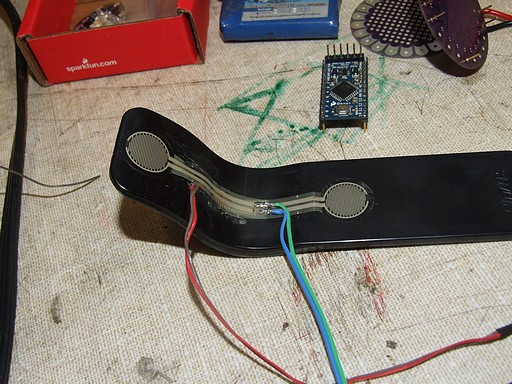 It was time to get started on updating Skatroller. For this version, I wanted to have control over the DECs’ output enable lines. The output causes the motor to brake if the commanded speed is less than the current motor speed. Now, the DECs aren’t actually regenerative controllers  or anything, but enabling the outputs while commanding zero speed acts as a dynamic brake. It’s just another added convenience if I want to limit speed, as this kind of braking will never actually bring the motors to a full stop.

I decided to use another sensor input instead of trying to calculate or design ranges of inputs for one FSR. Above is my spare FSR mounted in the original “wrist forward” position. The whole thing now acts sort of like a large rocker switch.

Additionally, I’ve elected to pitch an Arduino Nano on the board just out of convenience. It’s easier to read in two sensors and do whatever I want with the data using a microcontroller and some software (as much as I hate to admit it). 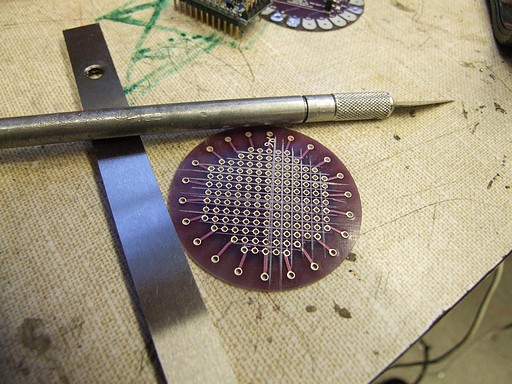 …but first I had to pre-cut all the fusible links in the Lilypad breadboard because they are the most annoying things ever.

I scolton briefly thought about connecting all the circular perimeter holes to alternating terminals of a METALPAKKK such that the sheer short circuit current would blow all the inter-pad links, but the setup for that would have taken longer than just going through them with a knife.

To facilitate alignment, I used a machine parallel as a straightedge to guide the +1 Exacto Knife of Trace Gouging.

I got a Lipower board from Sparkfun as a more efficient means of powering the Arduino and XBee stack. The Lipower takes the 3 to 4 volts of a single lithium polymer cell and outputs 5 volts. The Arduino uses the 5 volts directly and the XBee board internally down-coverts it back to 3.3 volts.

For simplicity, the Lipower board was double-sided-taped to the 900mAh lipoly cell through a layer of heavy heatshrink. On the other side of the battery, I stuck a piece of Velcro. The battery never sees any loads on its pouch surface, which is what I want.

I found these board standoff headers to connect the XBee board with the Arduino & glue circuitry below. 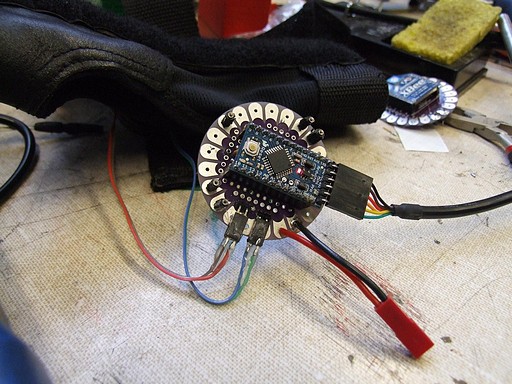 The arduino board  houses connectors for the 2 FSRs and the battery. It also has a small input RC filter for each FSR and another RC filter on a PWM pin of the Arduino to bring the square wave PWM back to an analog voltage. This is all shoved between the two header rows that the Arduino sits on. 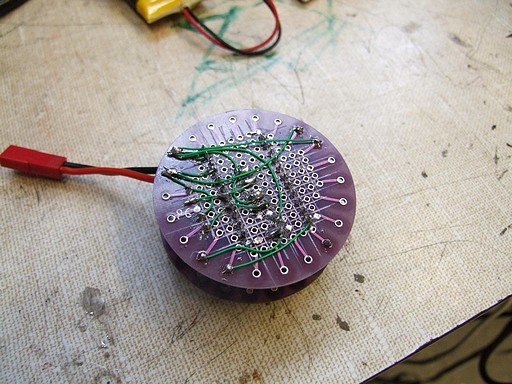 Here’s the back of the signal processing board, showing my usual tactic of point-to-pointing with 30 gauge wrapping wire. 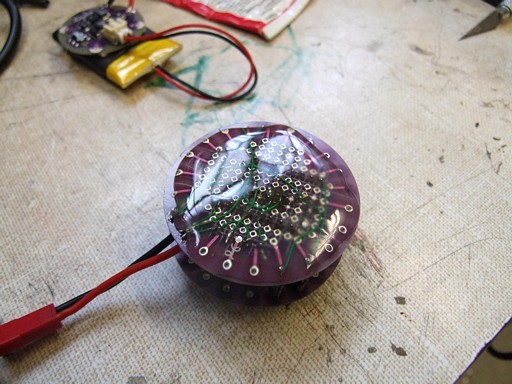 After verifying that the circuit worked, I coated the whole bottom side in a healthy layer of hot glue. After the glue set, the self-leveled surface got a chunk of Velcro attached to it so I can mount it to the wristpad. 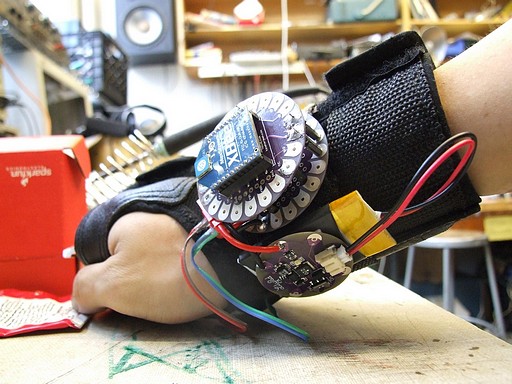 And now here’s the whole rig mounted to the wristpad once more! No obnoxious LEDs this time around – the only indicator of power is the three little red LEDs, one on the Lipower board, the Xbee board, and the Arduino. The assembly is almost excessively stealthy, especially when hidden under the cavernous sleeve of my modified fuzz jacket. 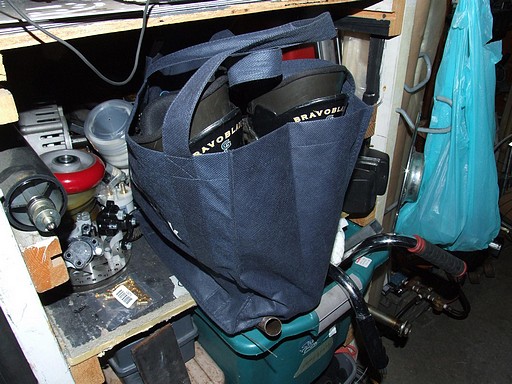 The carrying case for the ‘blades was a recommissioned Facebook swag bag obtained at a career fair many moons ago. The skates sort of fit in perfectly side-to-side, and the wristpads filled the rest of the space. So here’s the final shot of them ready to travel.

I ended up not having time to replace the wheels with the harder compound K2 wheels, but that will happen later.

The Otakon deploy wasn’t particularly exciting since the convention center specifically banned wheeled vehicles inside and there was no planned photo shoot for the Air Gear series anyway. There wasn’t a good reason for me to just stay outside the convention center and orbit around on the streets more than once – which is what I ended up doing. So, the ‘blades were under power for maybe 10 or 15 minutes, then stored  back inside the rest of the time. They’re certainly stealthy enough such that I didn’t rouse too much attention. A few people “got it” because they were familiar with Air Gear (though not hardcore fans). Overall, in terms of outward appearance, the ‘blades aren’t very impressive. The engineering is mostly hidden inside.

Pics or it didn’t happen? I’m sure someone had pictures, but I kept my camera with me at all times, so I don’t have any voluntary pics of the whole setup. Overall, what the con showed me is that I’m too lazy to actually cosplay and too focused on building props and gadgetry that nobody at a pop culture convention or without at least some familiarity with engineering would care about.

But, as I said originally, now that the RazErBlades are fully functional, reliable, and require no particular explanation of quirks to operate, I’m going to lend them out to friends and peers who have a better handle on inline skating and possibly put up a few more demo videos later on. For now, however, I’m going to call this version finished. It’s always open to improvements in packaging, power, and usability, but it’s August already and Dragon*Con and my annual robot party are fast approaching.

Soo… what did I end up inventing? Air Gear or Jet Set Radio?