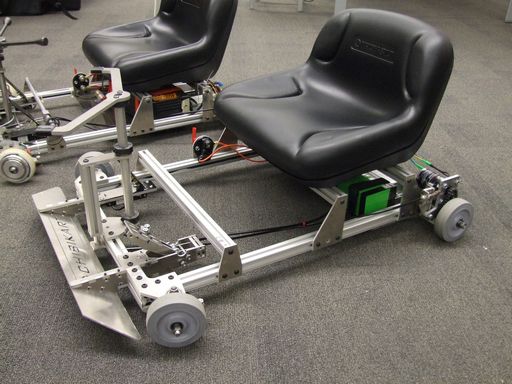 A Chibikart For The People

With Chibikart having exploded on the Internets for one reason or another, the deluge of questions and inquisitive commentary got me thinking. It’s certainly true that Chibikart 1 contains quite a few specialty components which aren’t readily available, yet the construction methods featured in the frame are indeed simple enough for many people to build. Aiming to turn Chibikart into a lesson in fabrication, parts sourcing, and an fun exercise of the maker spirit in general, I redesigned the drivetrain and many other parts such that essentially anyone could buy the parts and build one.

The frame plates are sourced from Big Blue Saw. The 80/20 extrusion and something like 75% of the frame hardware are straight off McMaster-Carr. Most other loose ends force expose you to small EV and scooter parts dealers, as well as HobbyKing. Most importantly, the exclusive A123 battery pack has been eliminated and replaced with commercially available K2 Energy modules after my….vetting process. The Jasontrollers make a comeback because of their ease of use, despite some of the compromises such as lower power and hard starting. Deliberate light fabrication exercises, such as building the mostly pre-cut rear drive wheel assembly, are designed to exercise basic shop skills. It’s like 2.00EV in a lawn mower seat. I’m also working on an Instructable that takes you through the entire build process, literally step by step.

The end goal of Chibikart isn’t to spawn a thousand copies of itself, but to encourage more people to take up making and building as a hobby by presenting them with a concise overview of resources, techniques, and tools that are directly applicable to an end result (which is quite fun to ride). I’m far more interested in seeing where people take the concepts on their own, rather than seeing more Chibikarts zipping around.

One thought on “Democratic People’s Republic of Chibikart”