Last time, Tinytroller was trolling Straight RazEr already, but it still had the occasional strange phase latchup issue. Well, I swapped Arduino Nanos, and it turns out the other one just has a damaged pin or has mild Turet’s or something.

So now it works great. With the current sensor bandwidth increased to the 800 Hz it should be at, the throttle nonlinearity dubbed “turbo lag” has been eliminated, at least for this drivetrain. Time for video!

While you can’t really observe a speed controller working (it’s in the same vein as watching epoxy set and batteries charge), the difference between current limits is clearly obvious using a standstill-launched Straight RazEr. In the video, the hardware current limit (the point at which the sensors peg on either voltage rail) was made to be 60 amps, and tests were performed at 10, 20, 40, and 60 amps. Motor phase amps were controlled to be around those values at all times, and I set the throttle mechanical zero position to induce a little bit of drag braking so I wouldn’t splat too hard on the far wall.

40 and 60 amps looked very similar, mostly because I had to begin braking almost immediately to avoid planting into the wall. I’d really need a larger hallway for a more conclusive test. When everything is properly working, it seems like 60 amps is no problem for this board. There were no observed noise effects or aberrant resetting instances. The current sensors can only be bridged so many times with low-ohm precision resistors, and I think at currents higher than this the traces might begin to blow up again.

The only thing I can do now is wait for the new board and see if it’s still as good.

On a side note, RazEr rEVolution and Straight RazEr are almost equal in a drag race, with Straight RazEr taking a slight lead. This I did not know until I had 2 working scooters, and it also comforts me to know that RREV’s hub motor is brütally oversized. I never measured the output of RREV’s chopped Jasontroller, but ballparking it by equivalent torques (for roughly equivalent accelerations) it has to be in the neighborhood of 50 or 60 amps peak.

Straight RazEr is the first of the “travel fleet” to see action in Atlanta. It’s also the first to be broken and then on-the-spot modified.

First, the video. Straight RazEr was brought to Georgia Tech for testing and to meet with its nemesis Safety Razor.

The first thing to notice is that the front fork on SR is no longer layered, flakey deliciousness. I repeated the build cycle using identical conditions to when RazEr rEVolution’s front fork was constructed – namely, getting rid of breezes and incidental airflow in the build environment by placing a large trash bag over Make-a-Bot as it was building. The build turned out much better, with less warping and no layer splits. I wicked ultrathin CA glue into suspicious areas anyway, just to shore it up. Additionally, the geometry of the fork was changed so it was much thicker at the pin joint.  Like RREV, this front fork has not been problematic through high speed sidewalk running. I suspect a high seam or curb will still take it out, but it would probably also take me out.

An afternoon of test running caused me to become totally fed up with the low-hanging front. Every turn was a waiting game of sorts since any ground disturbance would cause scraping. So, being close to the Atlantic Station, I just went to Target and grabbed a standard Razor A scooter to perform a “neck swap” of sorts.

The base of operations was Georgia Tech’s Invention Studio, roughly equivalent to an upmarket version of MITERS that has departmental support (if you couldn’t tell by the two commercial 3D printers in the background… a third is to the right offscreen) since it is used for classes too.

I had anticipated that the A would be a direct swap with the A3. 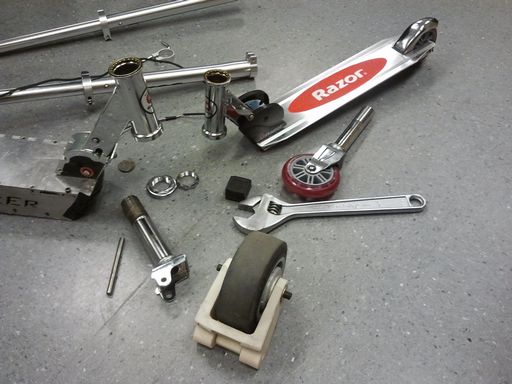 It quickly dawned upon me that this was not the case. The A and A3 appears to have diverged design lines some time back, and the parts are no longer an exact swap. In particular,

RazEr rEVolution used an older version of the A which had the exact same geometry, so that swap was a trivial operation. However, the A and A2 line appears to have evolved further than the 125mm wheeled A3.

I will try to get an A2, which also has the modular front fork, to see if it shares geometry with the A or A3. 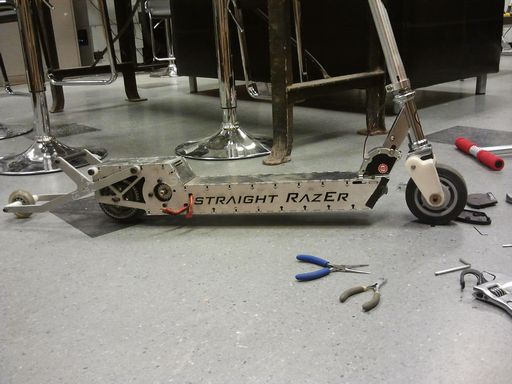 It somehow worked. You don’t really want to know how.

I ended up adjusting the shoulder screw on the end of the locking pin so it cleared the folding joint base (retaining the A3 base). Next, I just used the A headset bearing on the A3 fork and tube – this means the headset bearings are really not seated in the races, but more on the top edge. Whatever, it’s not a high speed joint anyway, right!?

Anyways, the result after all that is about another inch of ground clearance. Unfortunately by this time the sun had already set and the drive chain had already been broken apart, so Straight Razer will just have to wait for another day.