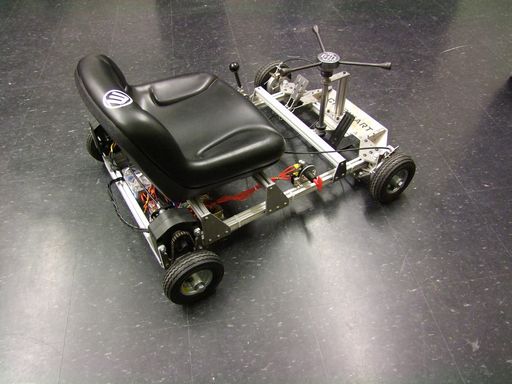 After burning out Chibikart’s drive motors repeatedly during heavy racing, I grew weary of rewinding them and decided to take the design in a different direction. Taking advantage of the earlier release of the low-cost Vex Pro “ball shifter” transmissions, I elected to make the design similar to DPRC, but with two speed ranges.

The intent of the design was to illustrate the difference that additional gearing makes for vehicles that rely on sensorless drive. I often discourage sensorless drives for “go-kart style” inertial loads where you can’t use body movement (such as hopping on a scooter or bike and pushing off) to inject velocity into the motor without, say, looking silly. What mechanical advantage from the motor (i.e. gearing) does is reduce the “apparent” mass of the vehicle – hence, if the gearing is high enough, the initial bump of current the controller injects is enough to overcome the inertia of the vehicle enough to get a valid back-EMF signature.

BurnoutChibi takes advantage of the two-speed transmissions to achieve gear ratios of 16.66:1 and 7.33:1. In the first ratio, it starts and runs every time, unlike even DPRC prior to its sensor retrofit. In the second ratio, startup is extremely unreliable, but still possible if you wiggle in the seat. The other advantage of the gearing is, of course, the ability to expand the speed range of the vehicle – while electric vehicles don’t technically “need” transmissions, having one still means you can have different optimal torque and speed operating points.

Shifting is accomplished by a mechanical cable linkage, though this has been less than reliable (the gearboxes tend to force themselves out of gear if continual pressure is not applied to the shifter lever), and one of the changes I want to make to it is switching to electronic shifting using solenoids. The original Vex shifter mechanism was a small air piston, so a solenoid is a more direct switch.