What is a ground effect vehicle? Is it a ship that floats really high out of the water? Or is it a plane that’s afraid of heights? Does it fly or does it sail? I’ve had to describe these things to people using concepts such as “a seaplane that’s afraid of heights”, or “a hovercraft that only works if you’re already hovering”. What the hell do you call them anyway? There seems to be as many names as people who have built one. They range from the informative-but-mouthful “ground effect vehicle” or “ground effect vessel” to totally construed acronyms like WISE (Wing-In-Surface-Effect) ship or WIG, and every other combination of “ground”, “surface”, “proximity”, “wing-in”, “effect”, “vehicle”, “vessel, “craft”, “ship”, “plane” or from the mad Russians who performed much of the historical development on them, “ekranoplan“. Regardless of the label, these vessels are truly unique in their choice of operating environment, taking advantage of the wing-in-ground effect to enhance lift and reduce drag.

I’ve recently become interested obsessed with them, and have taken them as an excuse to expand my buildable skills more. The ultimate goal is to build one I can ride on. Also, I hereby propose we call them failboats (as they are akin to flying sailboats) and the act of operating one is known as failing (since it’s both flying and sailing?).  The summaries below will always reflect the latest update of whatever it is I’m pitching together.

I’ve compiled a list of my favorite GEV videos here. If you’re aiming to do some reading, I recommend the book WIG Craft and Ekranoplan, which is both a technical treatment and discussion of general design and operation principles. 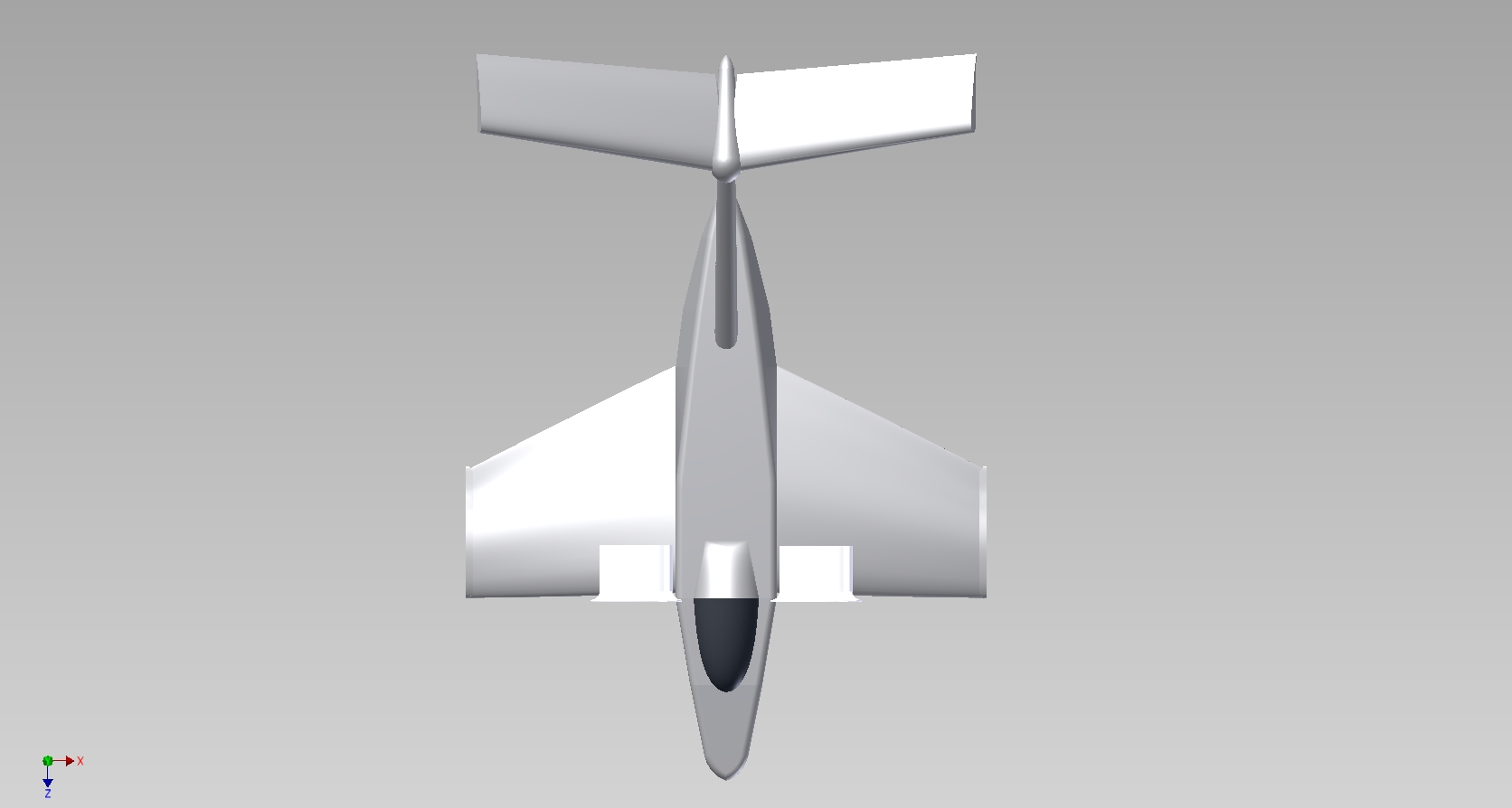 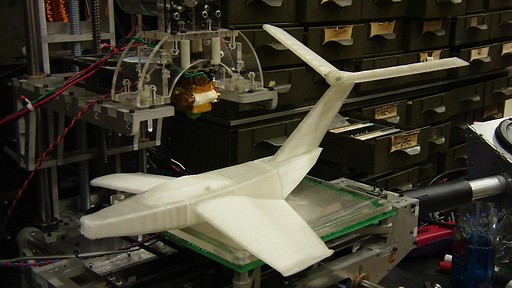 The goal of the Chuckranoplan project is to build me a full flying rideable GEV by… whenever. Since I freely admit knowing nothing about aerodynamics and aircraft OR ship design, and having slept through all my fluid mechanics lectures, and not really knowing how to use CAD programs to their full freeform surface- and spline-modeling potentials, I’ll start small, with radio controlled models. μCRP 1 was the first thing I’ve ever modeled in Autodesk Inventor that purposefully had a curve of more than 1 degree. It was designed to be small and cute so it can be 3d-printed on my small and cute 3d printer, the results of which are above. The design is completely unscientific and the airfoils were freehanded based on drawings until they looked “right”. While I originally intended to install R/C equipment and power systems, the craft proved… well, completely unviable, to no surprise. The issue mostly centered around excessive weight resulting from use of 3D printed solid plastic parts. 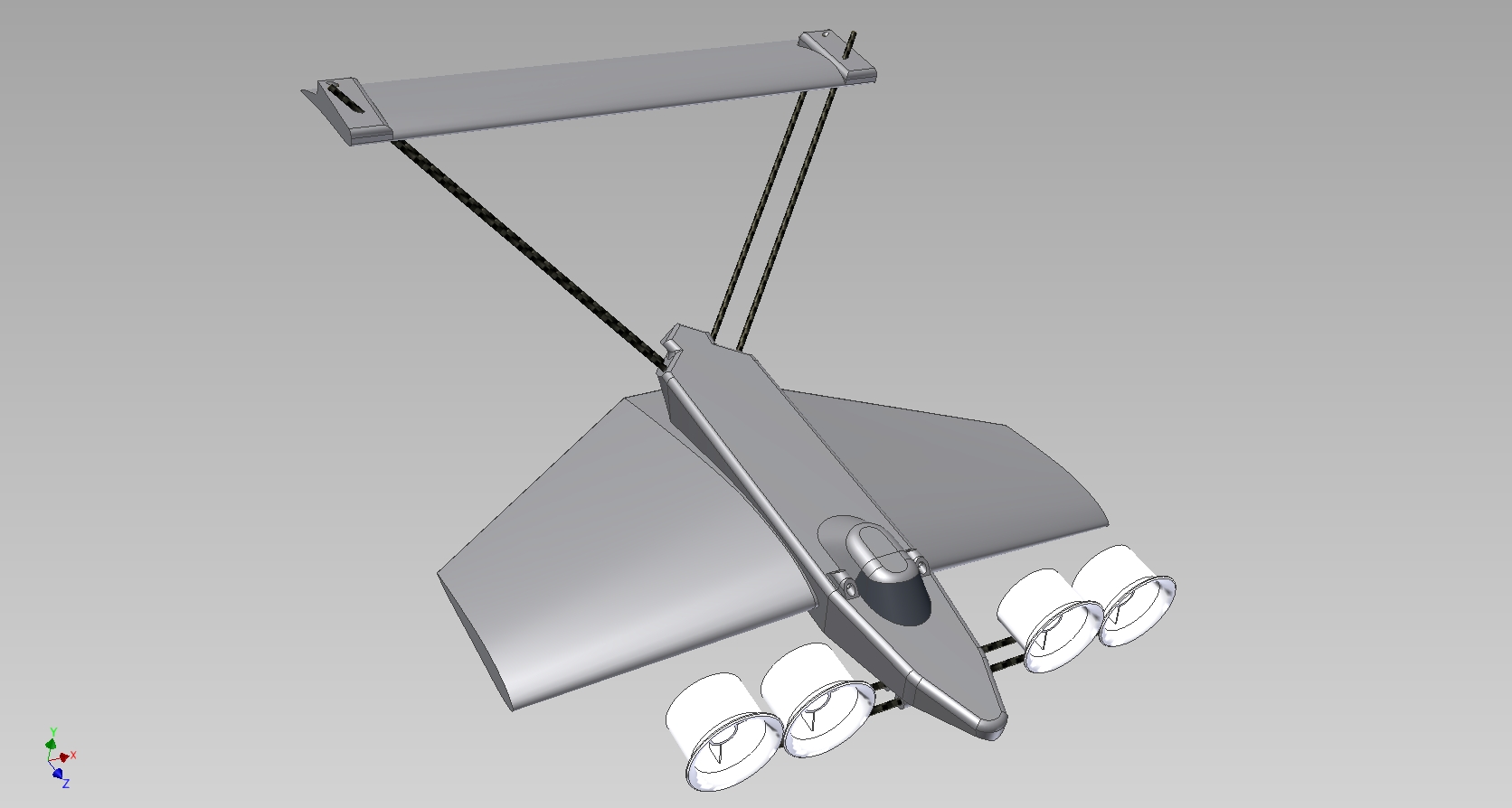 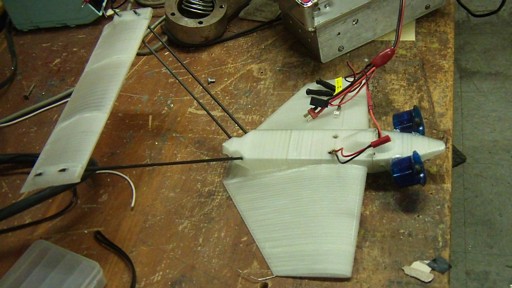 And reproduced in real life.

μ-CRP 0002 featured a larger wingspan, greatly increased wing area, and better adherence to the original Lippisch-style delta wing. Marginally better. The prints this time were made in 2 layer shells. While each individual part was pretty light, all of them added together coupled with the fact that this one is much larger meant that the model weighed too much anyway. Attempts to make single layer shell prints were not really successful. 0002 was also the first to be fitted with a power system – in this case, two small EDFs and a 3 cell, 500mAh lithium battery. The controllers are little 12A units from Hobbyking, and I took the Spektrum BR6000 out of Überclocker to run it. Again, weight proved to be μ-CRP 0002’s downfall (literally in a sense), since it didn’t have enough thrust to pull itself in order to start moving, and could only continue skating along the ground if given a healthy push. Additionally, the reaction torque of the two fans spinning the same direction cause a strong leftward pull. The model’s aerodymanics have promise, but they would need to be better executed. 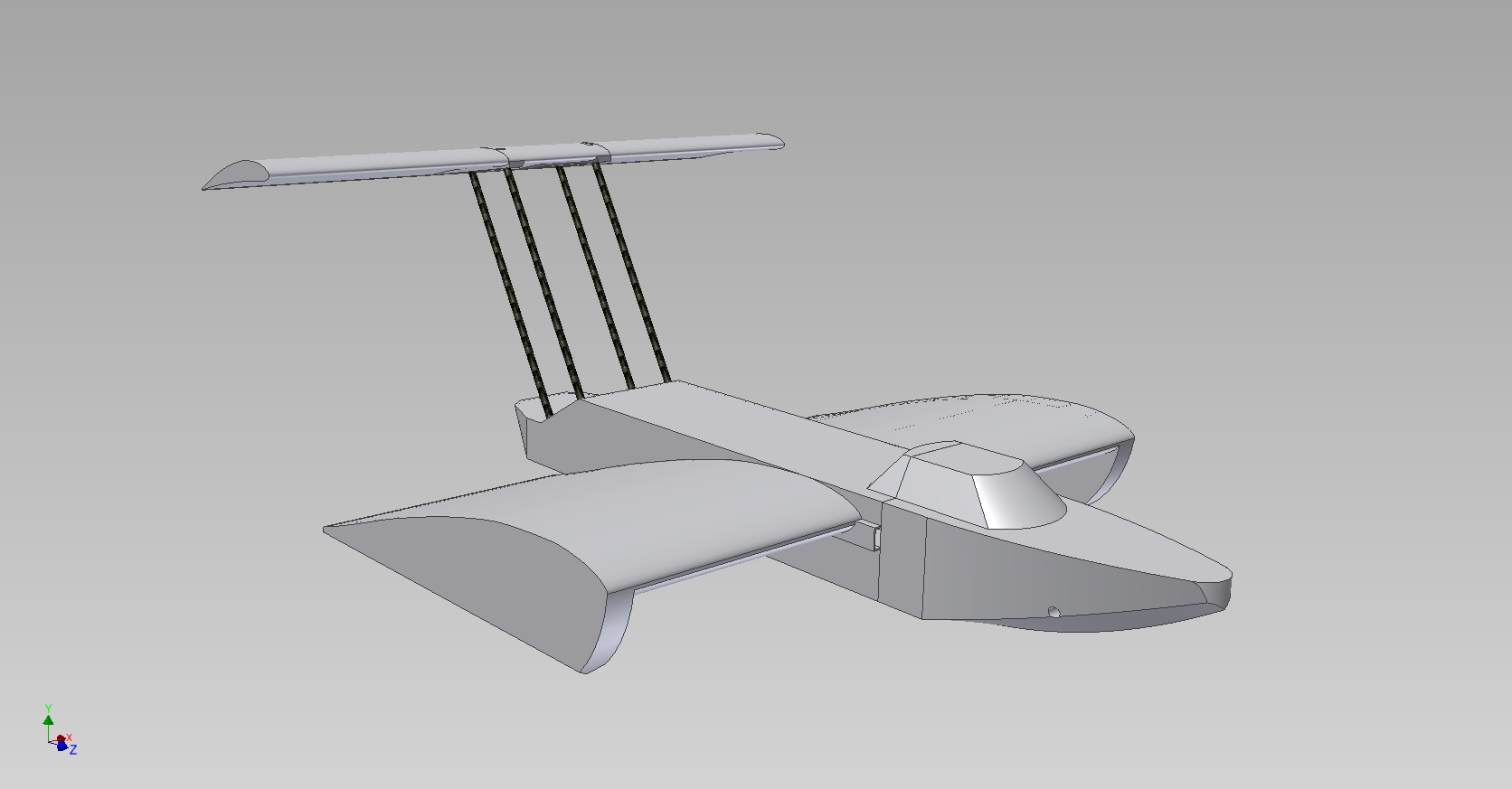 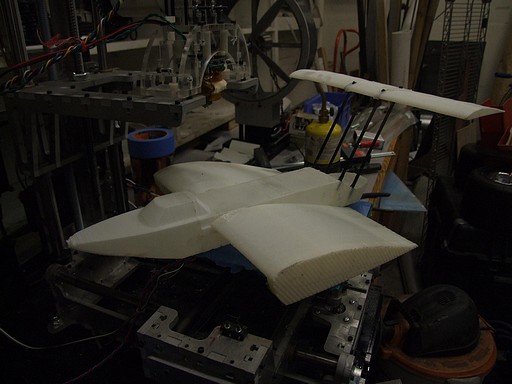 μ-CRP 0003 departs from the Lippisch-style Delta wing (or my poor attempts at it while trying to not make it look derpy) and moves towards a DACWIG or “Dynamic Air Cushion Wing-in-Ground” topology. I use the word mildly ironically because it seems to only exist in the vocabulary used in one book, namely this one.  These craft, of which the TY-1 seems to be the only extant example, feature a deep air pocket under the wings, along with large side pontoons. The fans (bow thrusters) are directed eternally under the wing. Therefore, these particular vessels use not only aerodynamic effects, but also dynamic pressure augmentation from the thrusters, to generate lift. They represent a middle ground between pure dynamic air cushion craft and pure WIGs (which use only the chord and span dominated ground effect). They also have square wings, which (in addition to not looking derpy) should be reasonably easy to build using legitimate wing construction methods.

Furthermore, I made some advancements in designing the airframe parts to be 3d printed, including exploring the use of the “Incomplete Hole” to enforce single-shell prints. Essentially, I’m making everything topologically equivalent to a cut-open donut with 0.5mm thick walls. The single-wall printing success meant that 0003 is the biggest model yet, but it weighs nearly a third of 0002! It responded more positively to hand tossing for sure, but more work needs to be done. 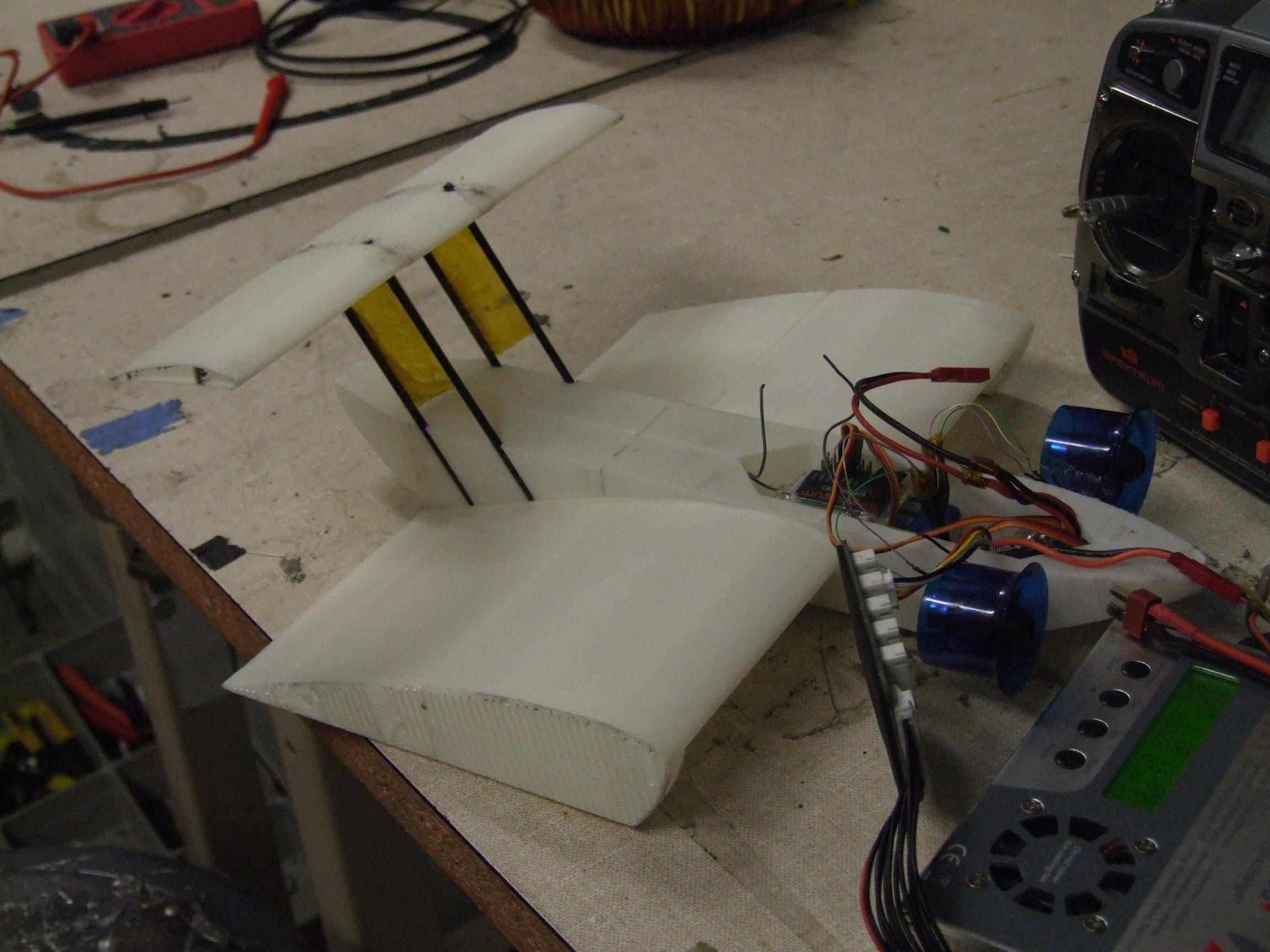 μ-CRP 0003B uses roughly the same design as 0003, with the exception of the tail being easier to install. The body was successfully single-shell printed and weighed only 4 ounces by itself. The unpowered model demonstrated an ability to glide 15 to 20 feet with a good toss, so overall I consider the geometry of the vehicle to be sound. However, addition of the flight electronics increased the weigh too much. I later learned that the battery size I selected was simply too large, which added too much weight.

This build will probably be my last one at “3d printer scale” that isn’t a model study. I’ve learned that it’s actually very difficult to build aircraft this small, even if this is not explicitly an aircraft.  The technical reason is that the Reynolds Number becomes too small, but the nontechnical reason is that I can’t build them that light.