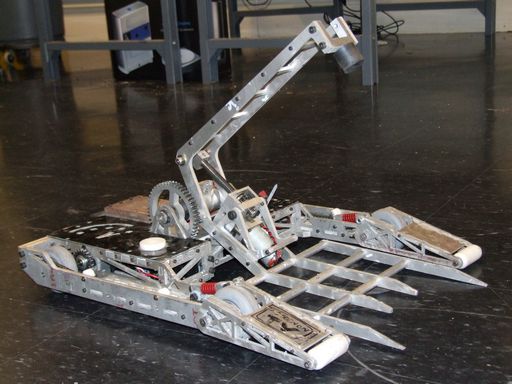 As my first fully new build in a few years, Überclocker is the bot that features as much of my current engineering skillset as possible. Based on a classic “clamp-bot” design, the goal is to exercise total control over the opponent by the simple merit of suspending them off the ground. A large pronged fork with an overhead secondary fork allows for trapping, and subsequent control of the opponent.

To overcome the problem of tipping when an opponent is suspended from the forks, Überclocker features spring-loaded front support legs. Having these forward supports sprung means the robot will not lose traction when it grips an opponent; rather, it will simply shift forward onto the front wheels. Überclocker is designed for the new 30 Pound Sportsmans class, which was formed to encourage innovation instead of pursuing terminal designs with outrageous budgets.

The bot was upgraded significantly for the 2012 competition season, and is now retired.

Überclocker’s build report can be found in its category.

Überclocker Remix’s build reports are in a separate category.