T-minus right about 48 hours before I be trippin’, and Clocker has just begun its journey back into one piece. I suppose this is really nothing new. 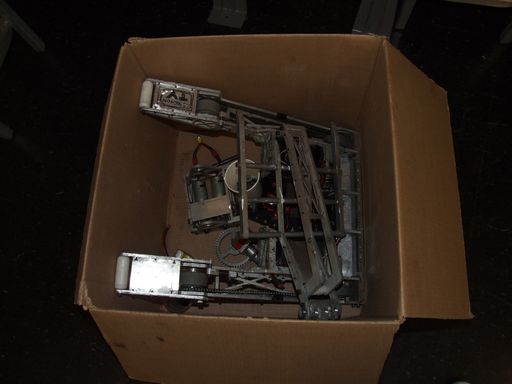 Here’s what the bot looked like at the beginning of this week. It’s not exactly complete… In order to finish up, I needed to remake several parts and wait on McMaster. Luckily, neither of these processes takes very long. The parts to be remade included the drive wheel assemblies from 0.25″ steel and aluminum, the top fork parts and new lower fork ‘tines’ from 1/4″ aluminum, and new sprockets from 1/8″ steel…the same piece of 1/8″ steel I’ve made Clocker’s previous sprockets and Cold Arbor‘s drive sprockets from, incidentally. It finally reached the end of its waterjettability with this round.

The first part up for rework is the top fork: 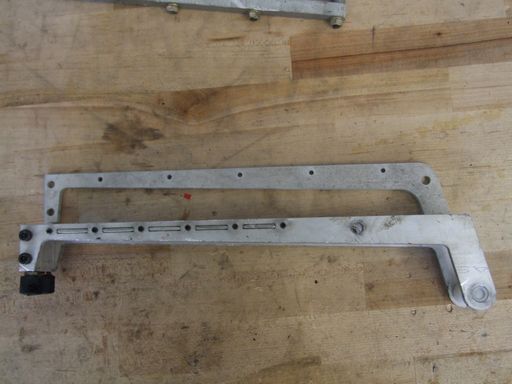 I played with the geometry a little more after the CAD images last time. The fork is now 2.5″ taller in the “gullet’ section, allowing it to park a bot up to 7.5″ tall (if the robot’s small enough to fit totally in past the grabby bit, that is). To reduce weight of the forward part of the bot, I’ve went back to standoffs for this part, as the .25” side plates provide most of the stiffness. 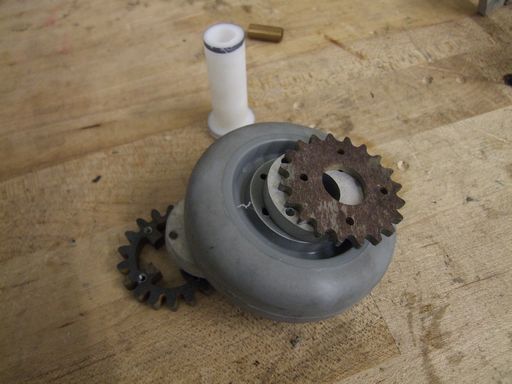 Here are the new front and rear wheel parts, in super-convenient pile-o-plates form. I machined the Delrin bushing from round stock on the venerable tinylathe. The wheel holes were drilled in-situ after a layer of sprockets has been piled onto the hub, since the hub plastic is polypropylene and exceptionally soft. The weird flowery cutout in the steel is for weight reduction only. 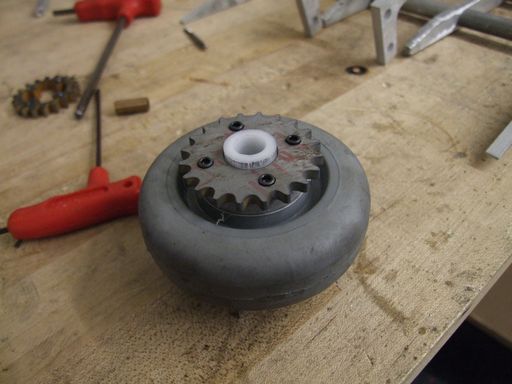 One issue that came up is that these wheels are manufactured….not very consistently. The hub on the one I used as a model seemed to be a few hundredths thinner than this set that I’ve gotten, with the result that my cap screws protrude further than the plastic hub. This meant they would have ground against the frame instead of letting the bushing take up the thrust load.

Maybe it’s my bad for designing something so close in a combat robot, but whatever. A quick hit with the appropriate diameter drill let me “counterbore” the holes enough to sink the bolt heads down below the bushing. 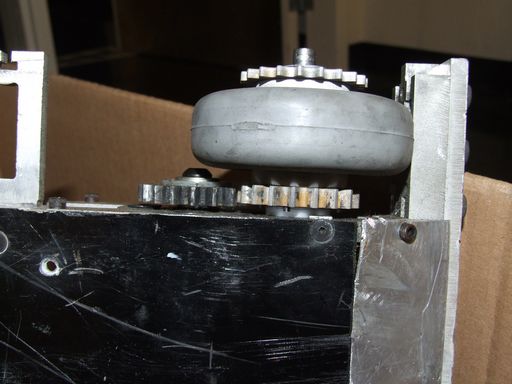 Once I made a full wheel, then I repeated the process production-line style for the rest. 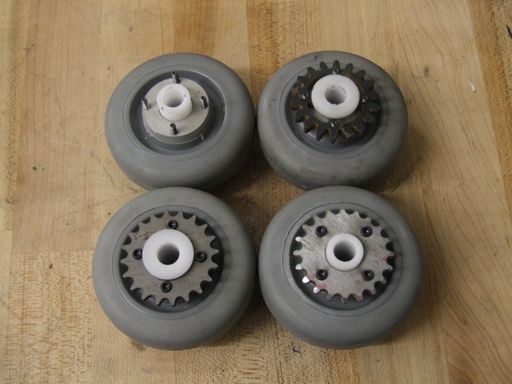 Again, what the hell are with these wheels? They have excellent traction and predictability on smooth ground, but they are so inconsistent. There are also massive voids in the molding near the center. Someone either just does not care at all, or they know their industry well enough to know what costs to cut…

The sprockets were “rotationally filed” to achieve the tooth chamfer that is critical to making your chain not explode off. 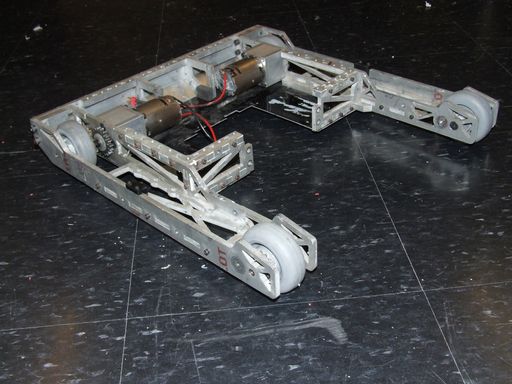 Here’s the chassis on all 4 wheels as a fit test.

SO MUCH GROUND CLEARANCE. A whole 3/4″ of it. That’s alot for one my bots – Null Hypothesis itself was my first design to venture above 0.5″ on purpose. I’m a fan of low and wide bots because of my arena combat history. 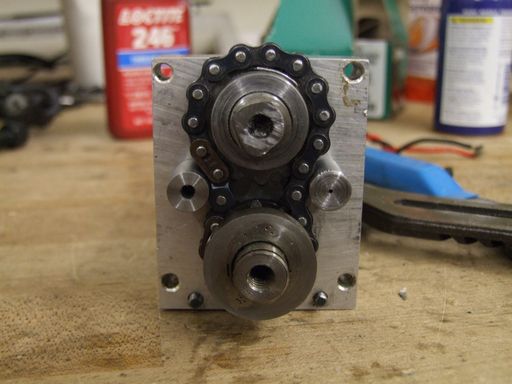 Onto the fork actuator. Again, this thing is Cold Arbor’s old saw actuator, which I saved for this exact purpose.

There was one problem with the actuator, though. The spacing of the sprockets did not result in an integer number of chain links in the chain pitch circle – this was one of those design oversights I’m unfortunately too prone to. The end result is that the chain has always been extra floppy. Cold Arbor used to regulator ditch these chains because they would bunch up at high speeds and then get ripped apart by the drive motor when they got jammed against the side of the actuator frame.

I decided that there was no real value in trying to move the output center up a little, which would have resulted in me needing to machine some kind of weird adjustable linear bushing. Instead, I elected to add these ninja standoffs to act as crude chain tensioners. They’re made of some random steel round and screw onto the protruding motor mounting bolts. They keep the chain squeezed around as much of the sprocket as possible. 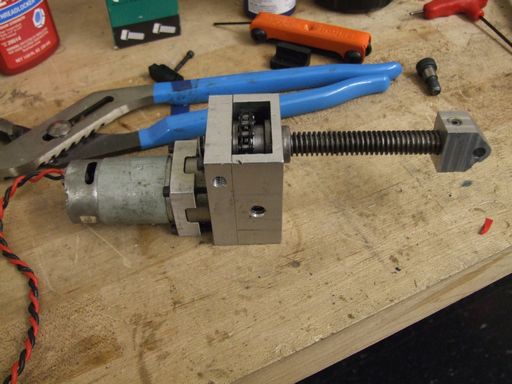 Now with the leadscrew cut to the correct length. 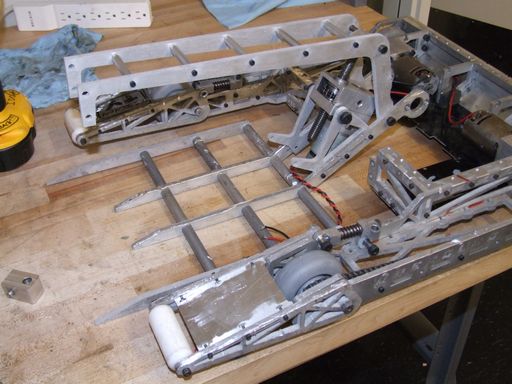 And installed in place – note the former plate spanning the two inner tines now replaced by the motor mount. 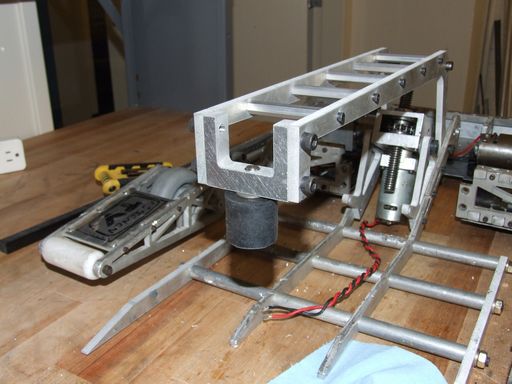 Say hello to Clocker Unicorn (or perhaps Clocker Cyclops). The big rubber bumper doesn’t look as out of place as I had anticipated, and it’s very squishy – good for hanging onto people. 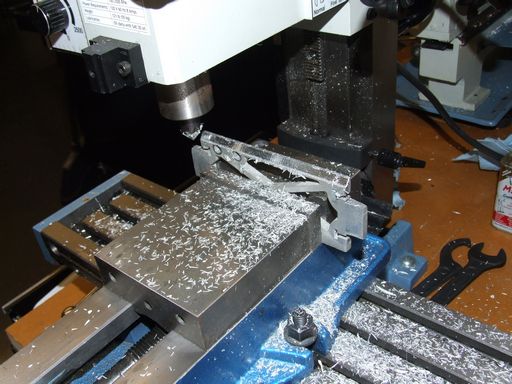 One problem I discovered was that the higher ground clearance meant the fork no longer got anywhere near the ground. The front structure of the lifter gearbox mount was just getting in the way. I counter-milled (milled with a countersink…) a chamfer onto the front and also took the height down a little bit. The amount is set such that the front fork will just barely not scrape the ground – I don’t want to deal with it potentially impeding the robot’s movement. 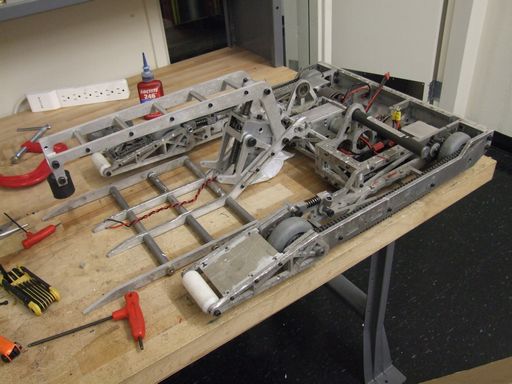 Starting to put everything back together now…

To reassemble just this part of the robot requires at least 2 sizes of ball-ended hex wrenches. Design win. 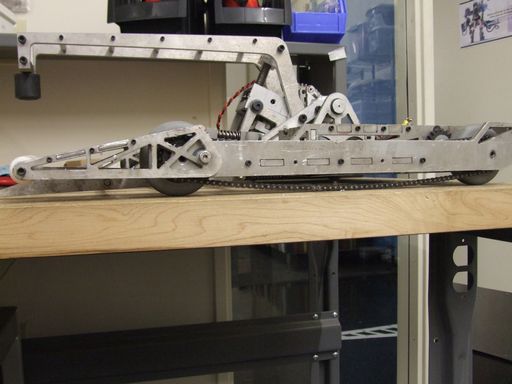 And holy shit those chains. No wonder I lost both of them alternately! 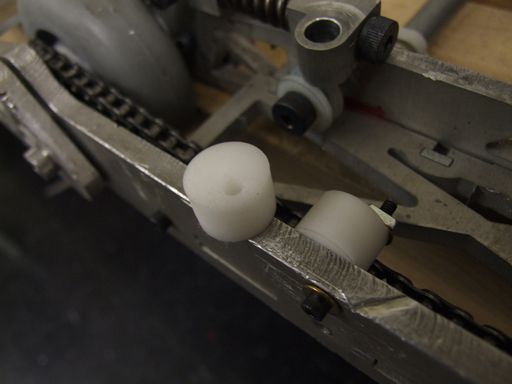 The solution is a set of miniature eggy-cam chain tensioners. Unfortunately not roller, but Delrin’s slippery tendencies should make up for it. These can be adjusted on their mounting bolts to press down on the chain in varying amounts. Way better than my very non-adjustable failed tensioner attempt of yestercon. 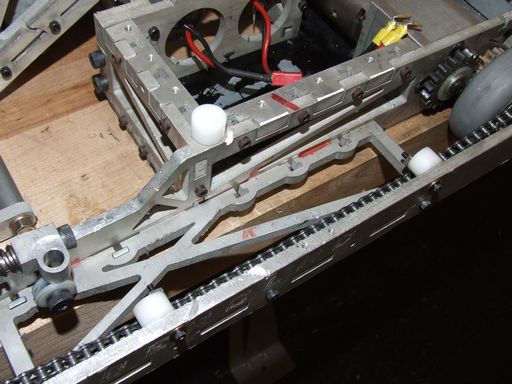 A full set of installed eggy cam things (more formally just called cam tensioners) totally removes the slack from the chain, with plenty of takeup capacity left. If it stretches more, I might as well throw out the chain. 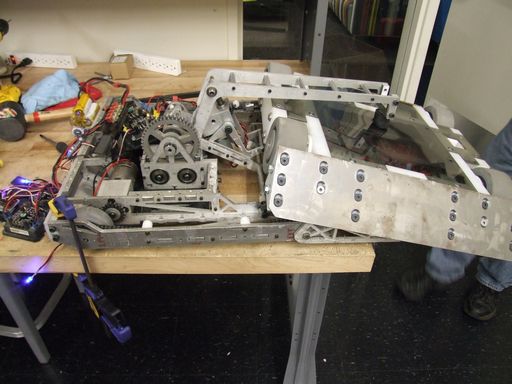 Alright, it’s time to test if my totally refreshed lifter parts can do anything! I clamped the robot to the table and hooked up the still assembled electronics deck to the fork. The bot’s 7S battery was reconnected, and… 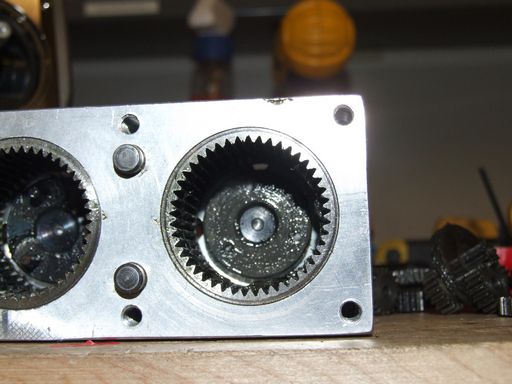 Okay, so I did managed one successful lift. Then this happened on the way back down when the fork hit the frame and the gearboxes kept torquing, even though the clutch slipped when that happened. The failure of the pins was entirely brittle – the break is clean across the diameter and there was no bending seen in the pins at all. The sound I heard from the outside was quite an impressive series of cracks.

Alright, alright. I get it. I suck at the mechical engeerning. A little more thought and analysis (and reading of the Chief Delphi forums of archived Banebots 56mm carrier plate threads) led me to decide that whatever the pin is made of and whatever the shaft is made of is simply too disparate in carbon content and possibly other alloying components to consider as one unit. One thing I could have done was to heat treat the shaft separately – pop the pins out, carburized/case harden the low carbon steel shaft to gain some strength, and shove the pins back in.

For now, however, I’m going to restore the system back to the way it was before I tried to fix it. When the gears are pushed tightly together as they are inside the gearbox, loose pins aren’t as much of a problem as them just shearing the fuck off. 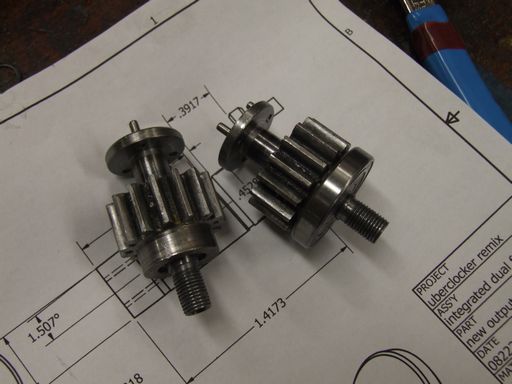 I took apart two of my older spare HF motors for these replacement shafts. They have a carrier plate that is a full millimeter thicker than the ones I used, and which are more commonly found in newer cheap drills. Damn cost cutting measures – really, it’s an extra millimeter of length of a shaft that is machined from a single piece of steel and is over 50mm long so it’s not like that much material is actually being saved compared to what is being removed to get the shaft diameter itself.

And damn these pins if they come loose inside.

I put the gearbox back together with the output stages submerged in grease so at the very least there’s hydrostatic pressure keeping the gears in line (Not really, but if the pins do loosen, the gear face sliding against the previous carrier stage provides alot of support to the whole assembly). 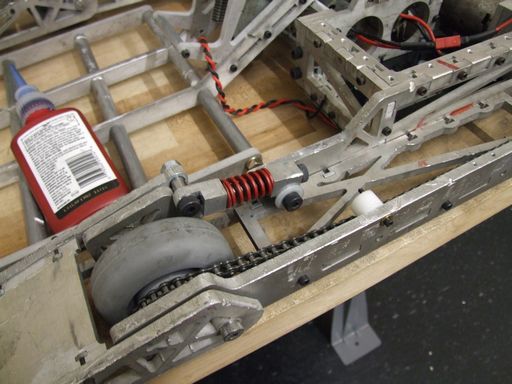 One more mod I made to Clocker today as I rage-reassembled it was some stiffer springs on the ‘front shocks’. The old ones were actually way too soft and didn’t provide much support for the bot as it lifted an opponent, so Clocker faceplants were a more common occurrence than I would have liked. These are about twice the spring rate of the old shock springs.

Clocker is now mechanically back together and alot less jiggly than it was before. What is it time for now?