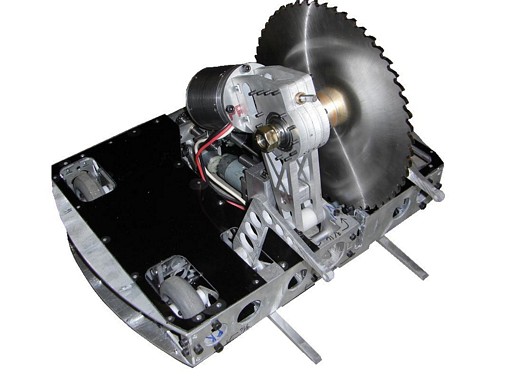 Cold Arbor is a 30lb Sportsman Class combat robot with an agenda: to build an effective sawbot. Historically, saw weapons have been extremely high speed, low torque systems, which mostly scraped and dinged opponents rather than actually cut them up. To get good results with a saw blade, the workpiece (in this case, the opponent), needs to be constrained properly and the feed rate of the saw controlled.

In order to do this, Cold Arbor has been outfitted with a powered clamping jaw system and a 2,000 watt custom brushless motor driving a 10″ milling saw through a 30:1 worm gear reduction, all leadscrew-actuated. The goal is to grab and eat other robots. The final speed of the saw is a very slow 118 RPM with immense torque.

Arbor has the most degrees of freedom of any robot I have built so far, surpassing Überclocker.The name is a play on low-speed machine tools known as cold saws, and the Battle of Cold Harbor of the American Civil War.

Arbor’s build reports are found in its category.