The NERC Franklin Institute event has been one which I’ve meant to go to for a few years, but always found it a bad time of of the semester. Not this time, however! Fresh off the #hype of MassDestruction, I decided that Clocker should have one more event. I meant to retire it at Dragon Con 2015. Hell, I meant to retire it after Motorama 2015. The design has been around since early 2013, and I would prefer to move onto something else. However, my continued corner-cutting at Dragon Con 2015 forced me to not accept letting my most winning and best performing bot retire because of a stupid Charles thing. It needs to either go out with a blaze, or go out on top.

So I finally made real hubs. 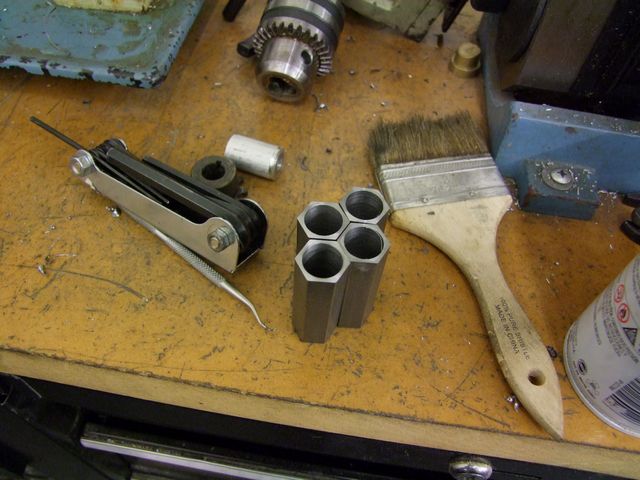 See? They’re made of STEEL!

Ironically, I only had a hex bar of 4140 steel remaining. Annealed, but still! Clocker’s hubs have went from under specified torque needs to way overboard. I was planning on using aluminum – until I discovered that what I thought was my remaining 3/4″ aluminum hex bar was actually 7/8″.

What the hell did I get that for? Anyways, short of machining the 7/8″ into 3/4″, I substituted for steel. To compensate for the weight difference, I had to make them larger and more hollow. They’ll have a Delrin insert for a bearing surface. I was planning on using bronze bushings with the aluminum design. 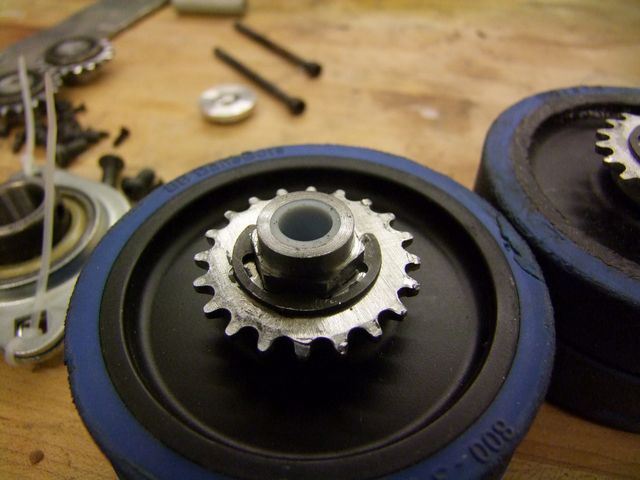 To make the Delrin insert, I machined some raw slugs, pressed them in, and then drilled the slugs to the correct bore in-place. Here’s the new hubs fitted with inserts! 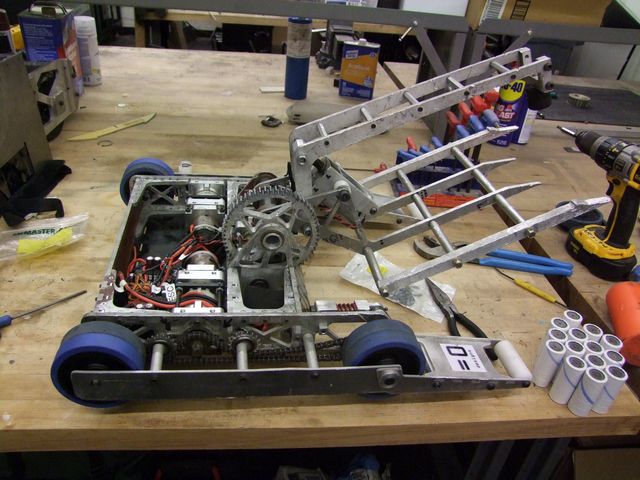 Clocker refitted with correct wheel hubs. Now what are those things on the right…. 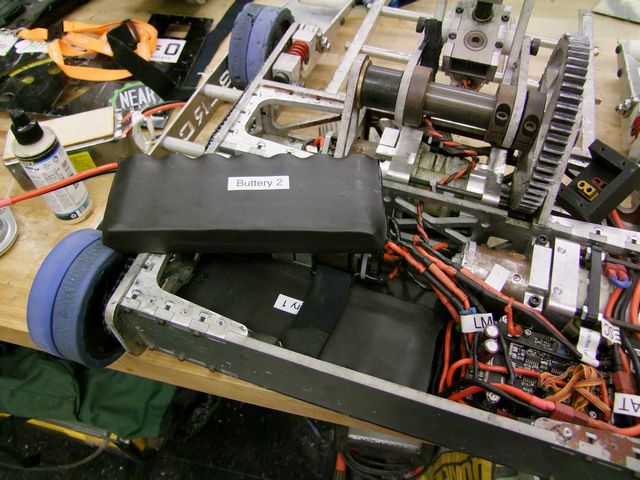 Another artifact of FI is that the event is held in an indoor space in a museum. The limited ability to “emit stuff” means that the common lithium ion cell – whether in R/C lipoly mode or otherwise – is banned in anything larger than 3lbers. I therefore had to put together an A123  (lithium iron phosphate) pack for Clocker.

The best I could do for weight was 7S1P, or 23v @ 2.3Ah. Clocker has run 1P A123 packs before (in the version 2 configuration from 2010 to 2012), so I knew it would last exactly 1 match and require changing. I made two packs so one was always ready and charged. That way, if needed, Clocker could still run back to back matches, which could happen if it entered the finals.

And as a final touch…. 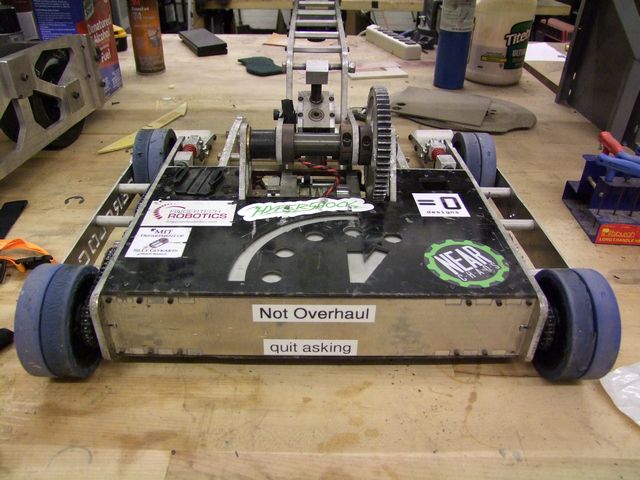 The addition of a few inside jokes is of course critical. 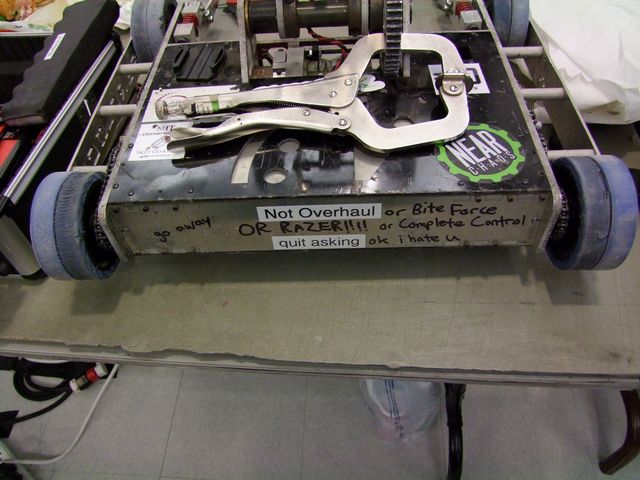 To get to the Franklin was a simple van hop-and-skip to Philly, upon which I spent half an hour alone trying to figure out the system of one-way streets that led to the Museum – then spent another 20 minutes figuring out the network of one way streets that led to museum parking. Seriously, Philly… what is up with the “one way grid punctuated by wide-ass Garden City avenues with no permissible turns but small one-way side avenues that selectively lead to one-way streets”? Is it because you’re close to New Jersey, where ‘turning’ is frowned upon? 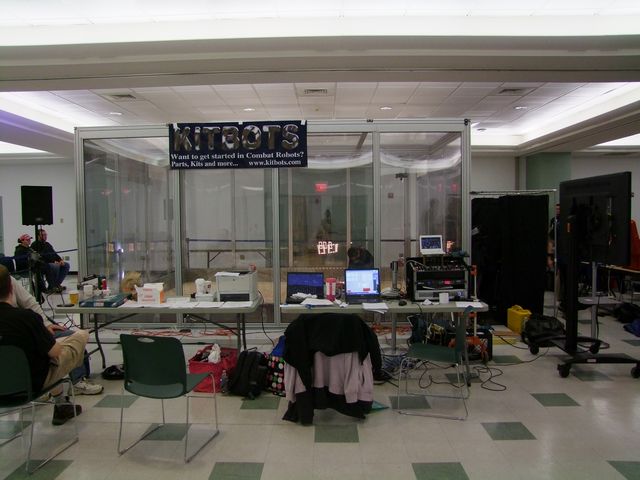 The arena was a very nice piece of work, and apparently it’s been around for 10 years! I sure as hell had not paid attention to FI events until now, but that’s pretty awesome. The museum had it built and takes care of it and stores it, in addition to providing staff to cover its operation the day of. This is one hell of a deal and I would like to support the event in any way possible from now. 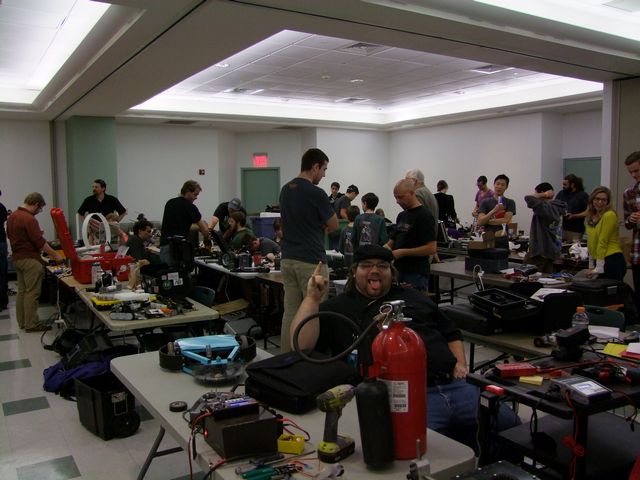 The pits were some of the most dense ones I’ve seen though, necessitated by the limited space in the room. This made moving bots in and out quite difficult, however, especially as people tended to keep toolboxes and the like in the walkways. It doesn’t help that Clocker is one big pokey fork thing. 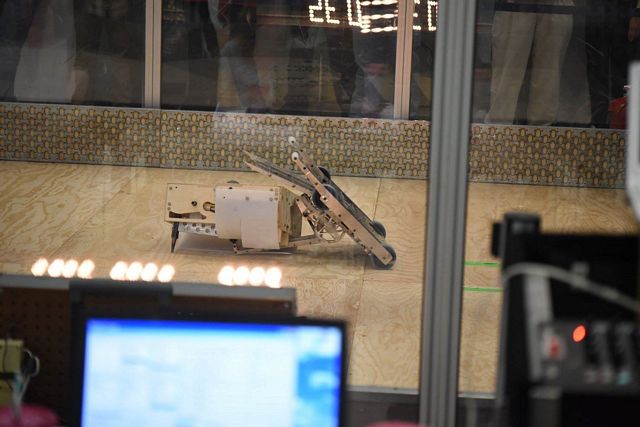 My first match was against Piston Wax, a bot I’ve battled before at Motorama in an earlier, weaker form. They have the hammer rather well dialed in now, and I tried to avoid crossing the danger zone. However, they did get an overhand strike on me once: 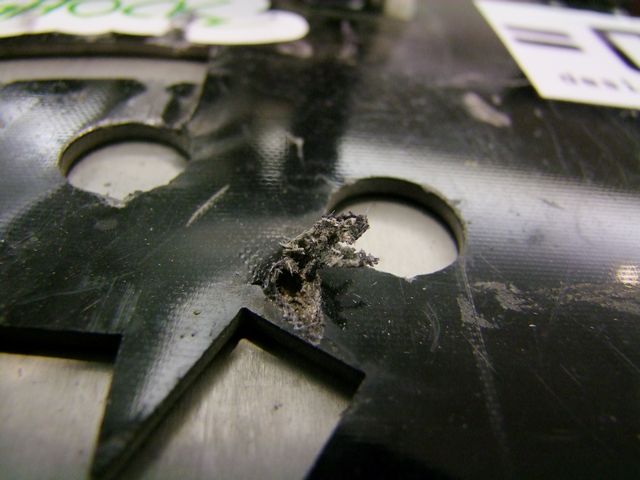 I’m glad I had the 1/32″ titanium underplating! The garolite sheet was pierced through, but it dispersed the impact well. I won against Piston Wax and moved on to face Magneato: 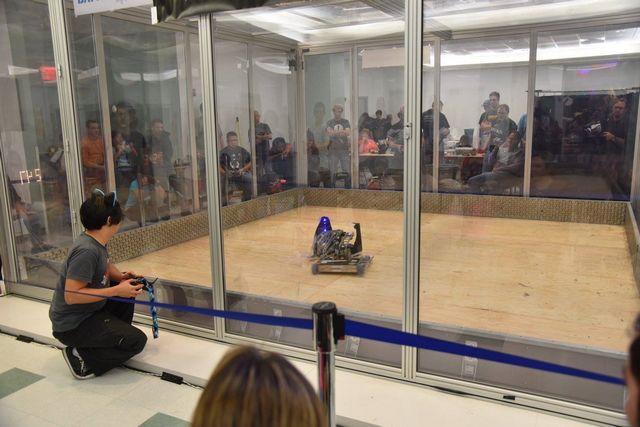 Magneato is a flywheel-powered flipper; Clocker fought it in a previous incarnation as Jack Reacher, and Zac has made both power and reliability improvements to it for this build. There was a lot of flying action in this match. For the most part, I tried to stay away from the flipping arm, but there was one moment where I made the mistake of “grabbing the whole Magneato”. I won this match also in a decision – here’s the video.

So what the  hell is that on my head, you ask… Well, it’s the new and improved Internet-destroying cat ears of loathing. I was presented with a set of these for my birthday this year, because of course they did. Naturally I had to make improvements.

While the ear caps are now “my style”, the headband is still much too small, and was very clearly designed for cute petite Asian girls. Three of those attributes do not apply to me; can you guess which ones? 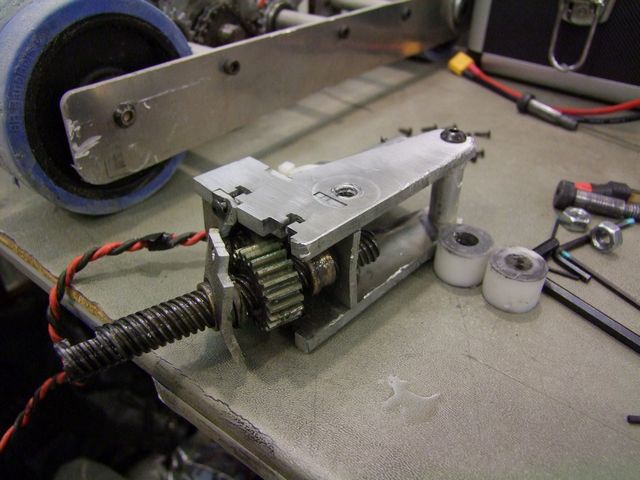 Clocker actually caught the full flipping energy of Magneato. This pulled apart the clamp actuator, but was visually spectacular because everyone assumed Clocker absorbed the flip without damage. Well, it did absorb the flip energy…

The front plate of the actuator was sheared right in two at the screw line. 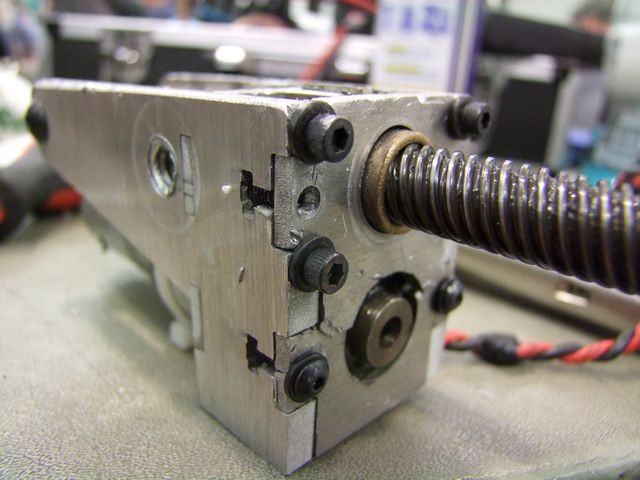 Luckily, with a vise, hammer, and big pliers, I flattened everything out. But the mounting screws had both been torn right off. To fasten the plate back on, I carefully drilled some #6-32 screws very close to the inner corner of the tabs, and then used washers to cover the inner corner as much as possible. 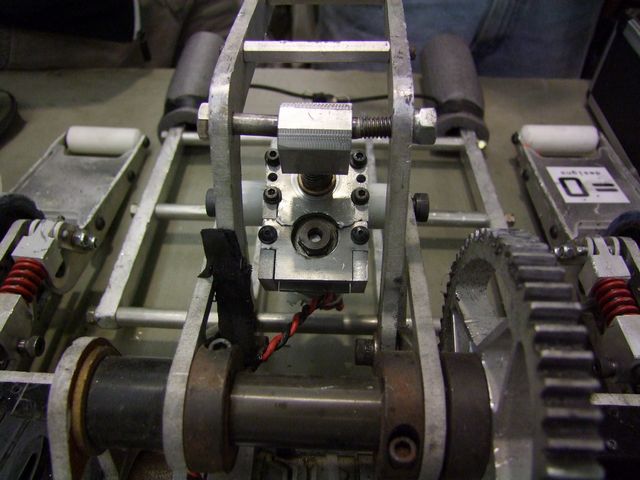 Here’s the repaired actuator re-mounted. Check out the 5/16″ grade-8 bolt that was bent by Magneato’s flipper. 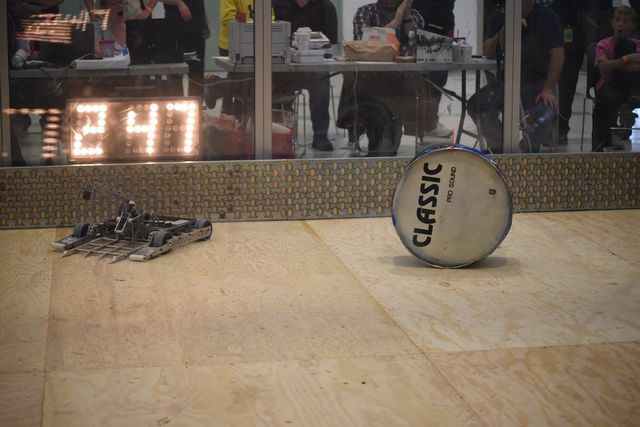 The next match was against…

It’s a shell spinner made of a drum. No, not a robot weapon style drum, a literal drum. Called Drumthing Special, it was built by the same person who built The Cone which I almost lost to because of material property laws. Time for some revenge.

There was a lot of “clampbot gymnastics” in this match, which Clocker was built to do, and which pleased the audience. Basically first thing in the match, I grab it and…. do some kind of lift-pirouette. I’m not sure what I was going after, but that looked totally intentional and if I’ve learned anything about robot matches, it’s that you always make it look intentional.

After Drumthing Special, I faced Dorno, a pizza box with a “rotating lifting device” i.e. a very slow spinner up front. The idea is it gets under you with said lifting device and drives you around. I was able to stay out of its way for the most part and got some good tosses and throws in. There’s no video of this match that I’m aware of yet, so here’s one of Dorno vs. Magneato. 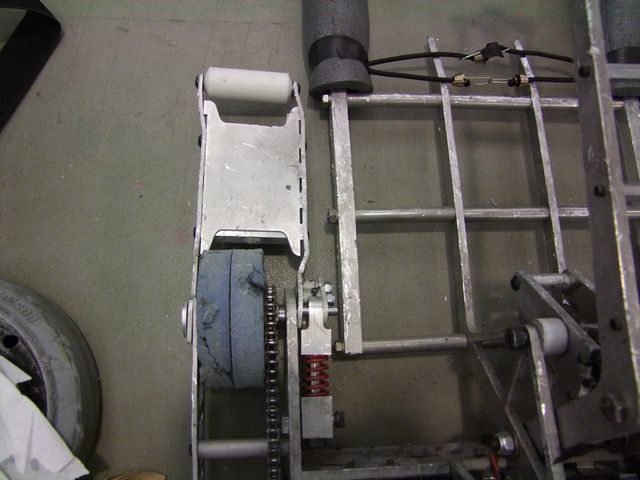 The thin plate front legs are showing a lot of wear as the tournament draws on. As I was running up on the weight limit with the rest of the bot, there wasn’t really a way to beef them up any further.

Clocker was now up in the finals against…. Magneato! The rematch went quite swell, and there was a lot of back and forth between the two bots, a substantial amount of airtime (by myself and Zac), and was a great close to the tournament. At one point, Magneato’s flipper caught the clamp arm again, and the repaired and weakened actuator exploded once more. At this point, I had no clamp function left, so kept trying to roll Magneato over and waste his shots. Luckily, the clamp arm is still biased by gravity, so I could still move it up and down slowly, which I did at the end to “show the judges” it was still functional. 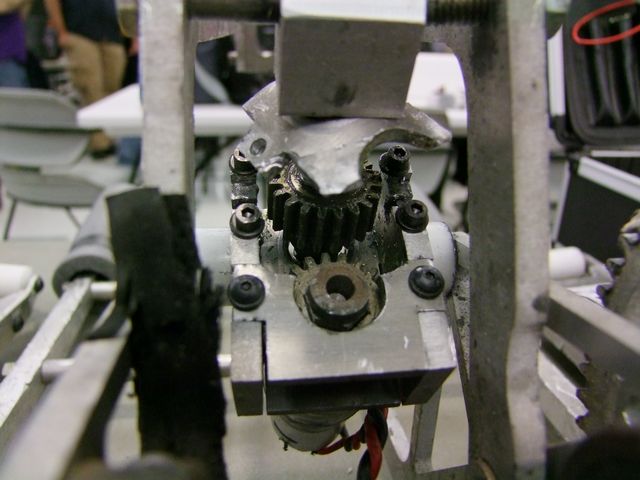 Here is the once-again Magneato’d actuator! 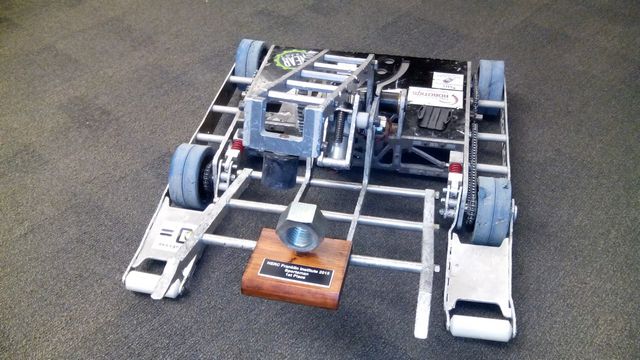 In the end, Clocker went undefeated and 5/0 this event. Amazing what bots can do when they can, you know, actually move correctly. While Clocker’s retired from competing, I’ll probably keep this version together and operational for the occasional display or demo.

What’s in store for Überclocker generation 4? The answer is uncertain. In the fall of 2012, I retired Überclocker Remix (version 2) and had version 3 running by Motorama 2013. But there has been recently a new development…

Oh dear. It would seem that Überclocker version 4 might well be Overhaul 2.0…

Let the masses rejoice, for I’ve decided to go ahead and post my Motorama 2015 trip summary, having been satisfied by the newbies, finally *ahem*. I mean, that and the fact that I have backed up way too many other things to talk about waiting on you guys to finish. One of the consequences of writing up an event report a month and a half post facto is that everything I remembered from the event and wanted to talk about really really badly is now… wait, what was I talking about again? See what I’m talking about?!

Additionally, for the past month or three, I’ve been working some black projects which will be excellent once revealed, but I feel like need a little more time to develop before I drop the bass. Rest assured it will not be disappointing.

Anyways, onto the event!