HEY YOU! Go pre-order some BRUSHLESS RAGES! After months of little fine adjustments, some of which has been documented here (and others will be), I’m finally ready to push them to release. There won’t be an Indiegogo this time, just open pre-orders on Equals Zero Designs. The estimated shipdate for pre-orders occurring this month is November! You all have seen what Brushless Rage is capable of and what niche it fills, so hopefully that’s enough!

Updates for the robots this Dragon Con season will come soon! Überclocker/30-haul is coming (finally), and Roll Cake shall rise again…

Brushless Rage is moving along quickly! I’m really hoping now to do a limited release (to people with known loads and needs) in time for Detroit Maker Faire. I’ve been working on it more sporadically in the past month due to other… obligations? but now I see the tunnel’s end. Here’s what’s been going on with it in the past few weeks when I haven’t been hiding under a van. 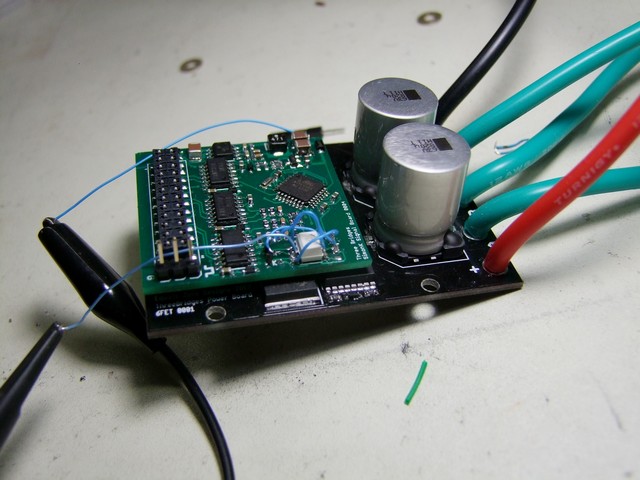 So that 2-way optocoupler salad was good in concept, but it ended up being incompatible with its purpose in life: to communicate bidirectionally so I could use the servo cable as a programming cable for SimonK/BLHeli enabled bootloaders.

It seems that the protocol requires the ability to tri-state, or at least assert both high and low logic levels. The circuit I modified can only drive high (or low) and otherwise has to rely on a pullup resistor, and that might not be playing nicely with the needs of the protocol. That is something I haven’t studied in depth due to its poor documentation, so if you know the specifications for the protocol, chime in!

Either way, it was looking like the final board revision would just use a single unidirectional optocoupler for the R/C signal input, and another galvanic-coupled pin on the same line but on the microcontroller’s side of the optocoupler as a programming header. 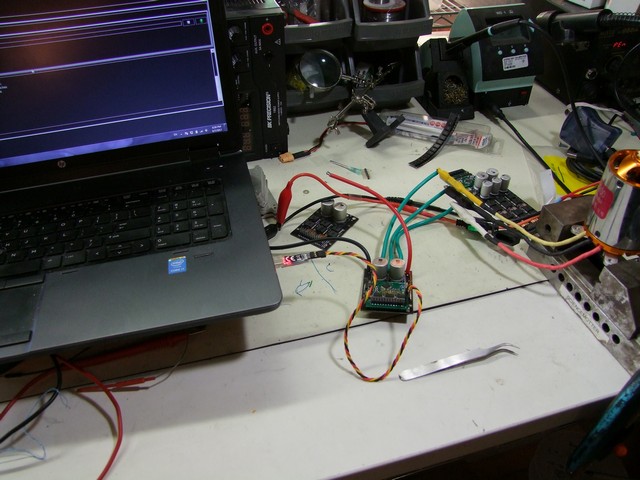 When the optos were bypassed (….again…. sigh) I was able to use the AfroESC programming dongle to re-upload firmware and change settings at will. The first step in this process is to flash the ATMega microcontroller with a socket and use the Enable Bootloader setting in KKMulticopter. Then I can just use the USB dongle instead of breaking out the socket every time. 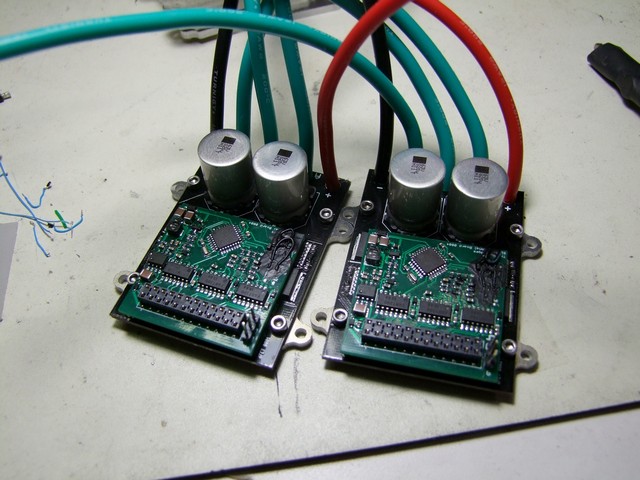 I prepared two units this way, and also had heat sink plates cut. These heat sinks were designed a while ago for the Half-Rage that doesn’t exist yet – it has exactly half of the spacing of the mounting holes of RageBridge! So it was a good pick for the 6-FET power board for Brushless Rage. I cut out a square of silicone pad to fit underneath. In the ‘production’ version they’d obviously be die-cut to shape.

So now I have two mini Brushless Rages. What would I ever test them on!? 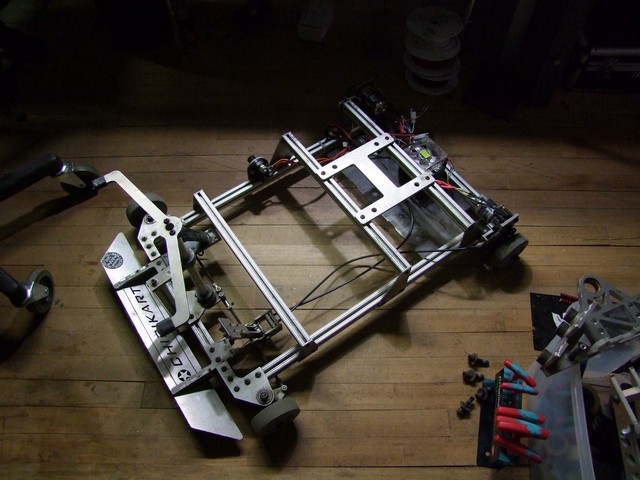 It’s back! I reclaimed the D.P.R Chibikart from the MIT shop not long ago, since they were refreshing a lot of the space displays and I’ve been gone a full year and a half now (…). This thing was kind of the pinnacle of my design class years, it having won an Instructables contest and all, and serving as a foundation for not only my next few years of students but for about a dozen or so builds worldwide (possibly more – those are just ones who wrote home).  A lot of tricks and hacks were used on it to make things easy to build for people without machine shop access. It’s also just stupidly fun to drive, and before the MIT IDC became populated extensively, we had stupid indoor go-kart races in it.

Over the intervening 2-ish years after my EV building class finished its run and now, it had been on display in various forms, so it wasn’t operational. The batteries had been removed and the motors’ sensor boards (which were partially designed for vehicle projects like this!) were broken off.  So I was just going to rewire it from scratch to accept two Brushless mini-Rages! 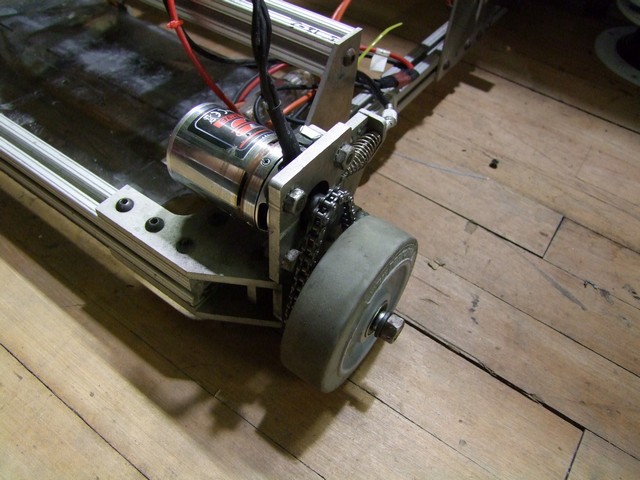 I focused on mechanical restoration first, like retightening some bolts. I had to add a new chain on the right side since the old one fell off (with the sprocket) a long time ago.

The sprocket itself is also quite well used, and the set screws are no longer very tightenable without stripping. I’ll likely have to drill these out to rethread them later due to the much higher potential torque going through them now with Brushless Rage. 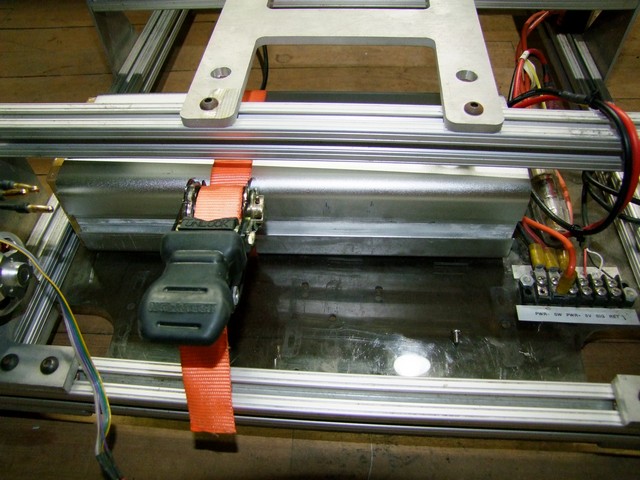 Battery-wise, I decided to look for a 36V solution to make sure they can operate at 10S/36V reliably. I had some older 10Ah e-bike packs which were given to me with broken BMS cards. So I just removed them and soldered output wires in place. Classic!

The output wires terminate in XT-90 connectors, which were also retrofit to the existing wiring harness. 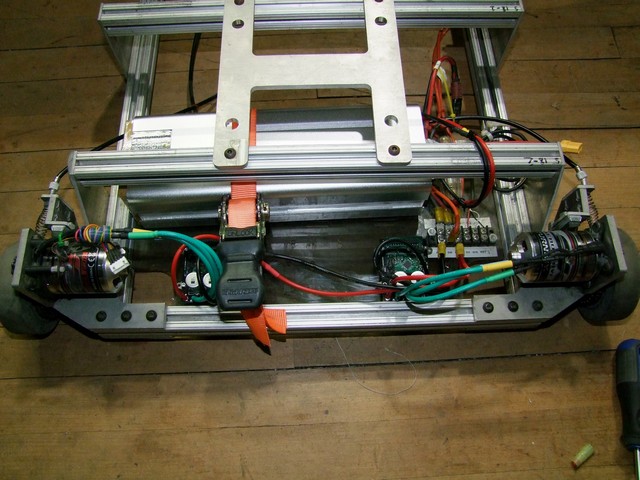 The Brushless Rage units are mounted with not much more than some Dual-Lock patches, and. 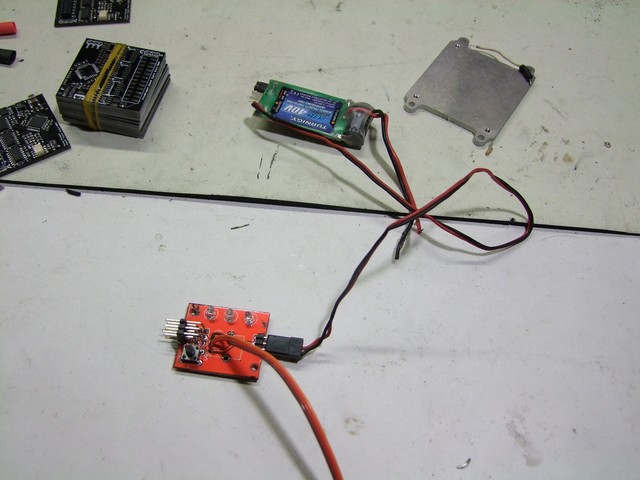 I had to pick through two boxes of random electronics to find my last working servo tester unit. In a pinch, these can be chopped up to accept Hall Effect throttles in place of their potentiometers. The Hall throttles typically put out between 1 and 4 volts instead of a full 0 to 5 volts, so the motor controller would need a calibration ability to get the full range out of it. 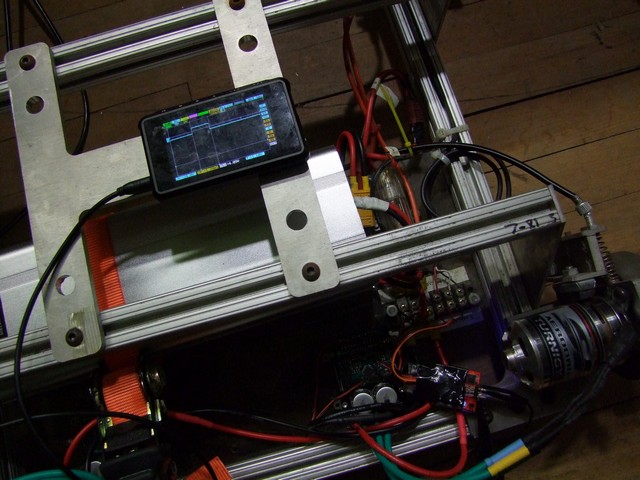 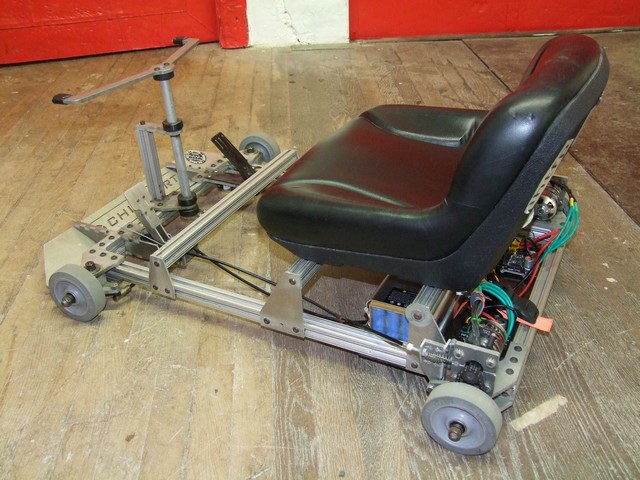 Everything’s bundled back up now!

Riding this thing has now become very interesting. Due to its very low gearing to the ground (only 3:1), it does have a hard start, but will always do so after a cog or two. This was actually a good test of how tuned out the SimonK firmware is; the mass-to-force ratio of an EV is usually much higher than that of a robot, even the 240b Sadbot, so it’s a tougher load to get going. The power is not unlike what BurnoutChibi ended up having, but more muted; BurnoutChibi had the advantage of being able to spin the motors much faster to get some ‘free power’.

I immediately ran into the problem of blowing the set screws right off the small filed flats on the motor shafts. This thing was originally designed for maybe 500-750W of power using the e-bike controllers, not an unlimited-current dump.

Either way, some replacement set screws and Loctite enabled some “road testing”. Here’s a highlight:

Results: My Starting-and-reversing optimized SimonK is okay in an EV application but only under some circumstances.

Specifically, you need to either turn down all the braking ramp speeds and magnitudes, or remove motor braking completely. In a robot drive application, the motor braking very closely following the command input helps decelerate the load and therefore reduce the momentum the motor has to start against the other way. In an EV application, that just means you decelerate as hard as you accelerate. It COULD be okay for some things, of course. I found that Chibikart drove well if I had the BRAKE_POWER setting cranked down to 1/8th of MAX_POWER, as well as the BRAKE_SPEED (ramp-down rate of the output PWM, basically) reduced to 3.

With these settings, I could modulate the throttle pedal to give a predictable regenertive braking effect. Too fast BRAKE_SPEED or too high BRAKE_POWER and you just end up impaling yourself on the handlebar here. I could see this on a tight Power Racing Series just thundering around never touching the brake pedal/handle, but it would still be a little annoying for a scooter or electric [skate,long,mountain…]board where you’d rather coast. In that circumstance, I’d just turn MOTOR_BRAKE off and forget about regeneration anyway.

For comparision, I found that Sadbot drove the best with BRAKE_POWER = MAX_POWER and BRAKE_SPEED at 4 (BRAKE_SPEED maxed out at 8 actually tried to slow the motor so fast it tended to either lock up wheels or slip motor poles on deceleration).

And with that, I sat down and pounded out board rev 5: 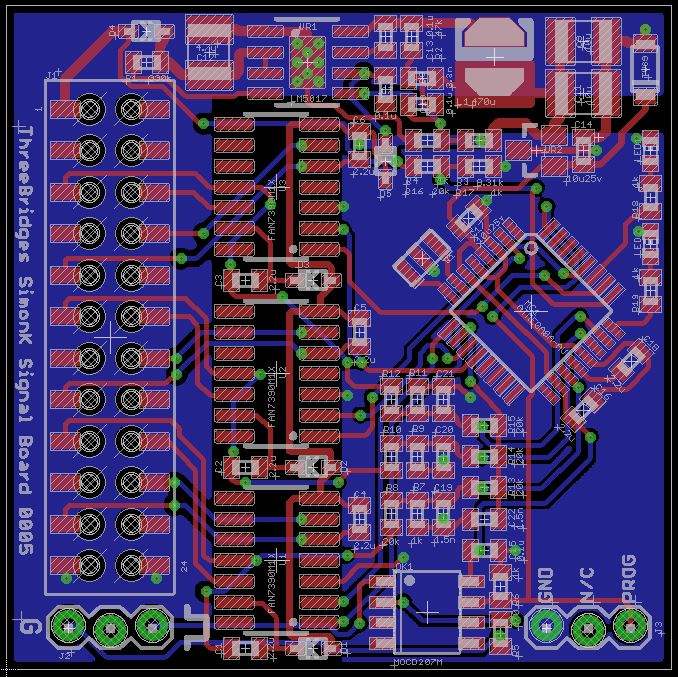 The main difference is removing the bidirectional optocoupler, as discussd, for a normal one. That’s still a 2-channel opto; I have yet to find a single channel (4-pin) opto in a package I like, but it does make more sense to use one here. Besides that, in rerouting some of the optocoupler traces, I got suckered into giving it better analog and digital signal separation (oh, boo-hoo…).

I also finally implemented the damned LEDs. SimonK actually has LED support, for signals that indicate throttle state and motor state. About time I figure out what this thing is doing!

Overall, I think Brushless Rage is ready to be fitted on something for Detroit Maker Faire. I’m not sure right now if I’m racing anything, or going to marshal and tech-safety-Stalin. I may choose to temporaily rebody Chibi-Mikuvan for funsies, since I want to keep the CMV shell in good shape after retirement.

Well, those are just thoughts anyway. There are also other thoughts: 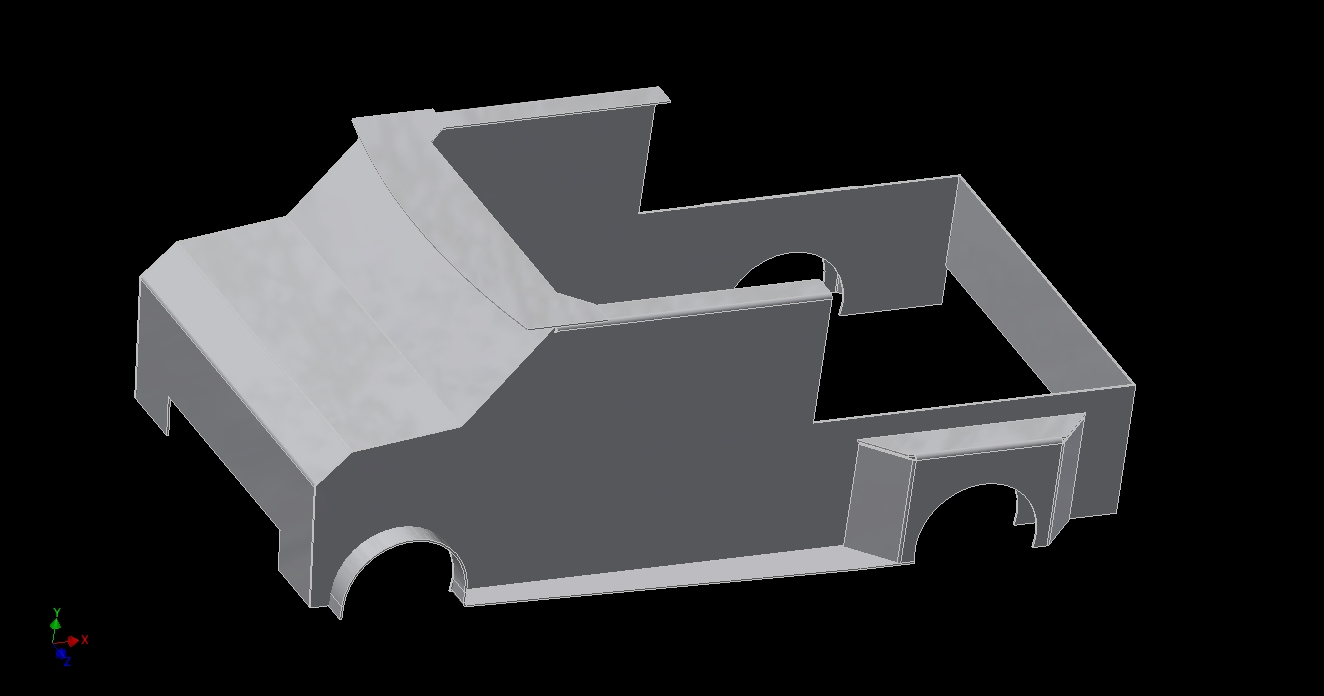