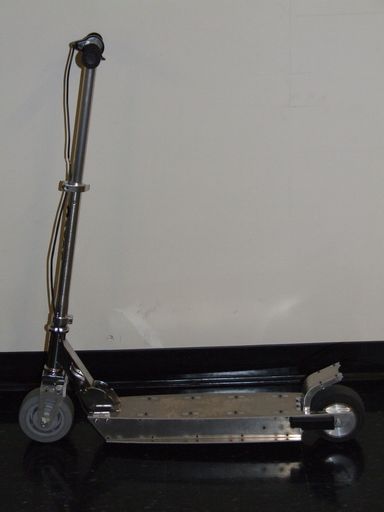 RazEr rEVolution worked brilliantly for a year and a half, seeing many demo events and quite a few motor controllers too, but ultimately battery troubles took it out of service and from there on it was eroded away by the tides of MITERS and fell into disrepair. There were things I found unsatisfactory with the design and which I wanted to address in a rebuild, so REV2 was intended to be the repackaging of rEVolution’s functional parts into a new frame.

The new frame is much lighter, being made entirely 1/8″ aluminum instead of having 1/4″ sides. I’ve also added a spring loaded fender-brake, addressing the issue of it neither having a fender nor a brake. I’ve cleaned up the wiring significantly, too, using 3D printed wire guides and electrical switch panels so the end result looks a little more professional. Otherwise, the “guts” are the same as rEVolution.