Hey, look at what I got in the mail! 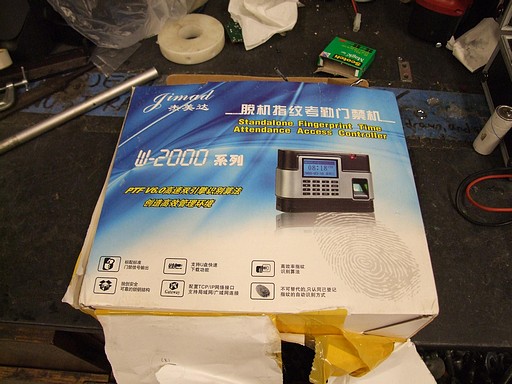 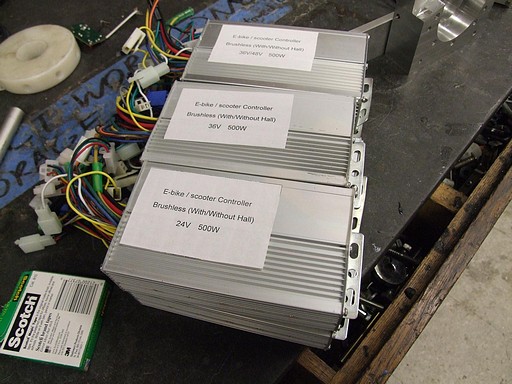 And the conclusion is that these things are huge. Dear god, they are enormous. It’s nearing the size of a real U.S. house brick. I guess the dimensions on the item page made it very clear that these were huge, but it was hard to appreciate until I was holding a pile of bricks in my arms. I had figured the 500W was just a limo version of the 350W – I guess it is, but it’s like a Hummer limo to a conventional Lincoln limo – it’s bigger in other dimensions too. 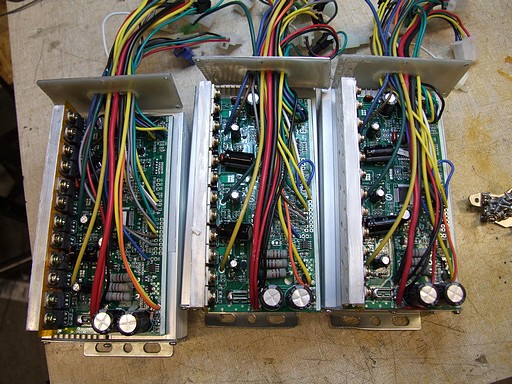 The purchase was for 2 each of the 24v, 36v, and 48v, 500W controllers. In the worst case, the idea was that we’d have a matched pair between us in case someone cooked up a crazy project that might involve 2wd.

Well, as far as I can tell, they are the same controller. That’s right, after examining the circuitry, I have come to the conclusion that the only thing which differentiates the 24, 36, and 48 volt controllers is the low voltage battery cutoff level. Yeah, they all have:

The real confirmation came when I ran the “24 volt” controller on 56 volts and it worked just fine – maybe not for very long, since that’s even above the nominal input voltage of a 48v system, but it ran Kitmotter just as easily as it would have on 24 volts. The LVC of the “24v” controller is set to be about 19 volts with hysteresis to 22 volts. The 36v controller is set for ~29 volts and ~32 volts. I didn’t test the 48v controller, but it’s probably around 40 volts. Either way, this might be the only thing that differentiates them from a power electronic perspective. 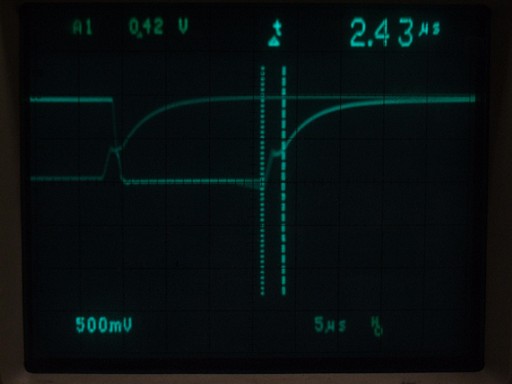 The switching time of the “24v” controller is above – not too spectacular, but given that the same dinky circuit is driving 2 FETs it’s also not surprising. What was surprising is that the gate drive voltage was only 10 volts. I felt that something wasn’t right – so I upped the voltage live to 36, and the gate drive shot up to 15 volts as I increased the bus voltage past 30. I am thinking that these controllers are 36v “native” designs, and work best at that voltage. At 24 volts the regulator is technically below its dropout voltage, and at 48v the parts may be under far more stress.

I touched a IRFB3207 FET to this for kicks, and the time-to-Miller increased to about 3.2 microseconds with a time-to-10 volts of nearly 7 microseconds. Ouch – without a faster gate drive circuit, I’m wondering how much I stand to gain from a FET-replacement Therapy session. This time, it is much harder to call just from looking. I’d actually have to break out the maths and calculate switching vs. conducting losses per cycle at various amperages to really make a decision.

I would say that while this purchase was enlightening, I’d much rather have bought a bucket of 350W controllers. They seem to have more “hack margin” and are a better value – the 500W variant, with its doubled FETs, is bigger, heavier, and not really that beneficial to upgrade without also modifying the gate drive circuitry.

This is the more interesting part of the post, so naturally I leave it for last after a bunch of drooling. Last time, I noted that Melonscooter seemed a bit slower with this controller than with its Turnigy 100A HV, and I figured I might have been hitting the commutation frequency ceiling – in other words, the microcontroller can only drive the motor up to a certain speed when it can no longer catch up. My fears were confirmed when Shane attempt to run tinyKart using a hotrodded-with-IRFB3006-FETs-and-shunted-to-0.5mΩ Sensorless Jasontroller and almost roasted both motor and controller.

tinyKart uses roughly 190 rpm/V Turnigy SK3 type motors, so at the 38 volt nominal volts of its battery, it should be no-loading at 7200 RPM or so. It has been clocked at this speed on Kelly controllers, but on the Jasontroller, it topped out at 4,700 RPM. While we were scratching our heads wondering why, the motor started spewing out smoke. Luckily, it turned out to just be some burning insulation, and did not yet reach the catastrophic level.

Oscilloscope measurement revealed that above roughly 550 Hz (1.75 to 1.8 divisions on a 1ms per division timebase), the controller no longer increased in frequency but increased its PWM duty cycle anyway to follow the throttle input. This would result in a huge current spike in the motor as it tried to spin faster, but the controller’s output frequency dictated otherwise. The higher above the limit the motor tried to go, the more current would be drawn that was only heating up the windings. Based on how quickly the windings started overheating on the SK3 motor and how the controller wires were almost melting, it could have been pulling over 100 phase amps. This was not metered for certainty, however.

Not even hauling ass up an empty parking garage did that to the motors. That was straight up burning 3000+ watts for a few seconds.

I had been riding around with a Wattmeter trying to keep track of my current draw and battery life. On average, my Wh/mi performance has decreased slightly – I’m now getting close to 45-46 watt hours per mile, when melonscooter used to be closer to be 40. However, the different is small enough such that I might not blame it all on the controller change – other facts such as the motor bearings getting very, very worn out, the tire pressure, and my giant drag-inducing cargo basket, could also come into play. However, it was most definitely slower – it felt closer to 20mph than its usual 25.

In other words, Melonscooter’s maximum theoretical speed is juuuuuuust over the controller’s limit. So, it might well be not pulling considerable current at top speed while cruising, but it’s definitely being limited by the Jasontroller. During normal operation, I’m rarely going full throttle for a long period of time anyway, so my battery life would not be adversely affected – but it could certain explain the few extra Wh.

How about the converse operation? 550eHz on a generic 12-slot, 14-pole motor would be 23 mph using my 4.8:1 gearing and 8 inch tires. Not conclusively out of the band of uncertainty for a 25mph design speed, but I know when something feels slower!

So overall, I got really lucky. But to sum up,

do not operate the Shady eBay Sensorless eBike Controller over 550 electrical Hz. doing so results in very high motor phase current and potential destruction of both motor and controller.

For a controller that was designed for hub motor drives, 550hz is actually really fast – even a hub motor with 40 or 50 poles, common in the largest bicycle motors, is still under 150Hz[1].  For R/C motors, the biggest multiplier of electrical Hz is just plain speed – RC motors are all designed to spin quickly with large low-inductance windings, while hub motors tend to have many slots and poles for smooth low speed operation.

For now, I’m going to keep  melonscooter on the Sensorless Jasontroller, but I may start playing with lowering its gearing from the current 4.8:1 to something like 4:1, using a larger motor pulley. The reason? If my top speed is really just a motor speed limit, I can squeeze a little more vehicle speed out of it by changing my reduction ratio. With the Jasontroller still hacked to be about 1800W, I’d trade off some acceleration unless I chose to push it even further.

However, there is definitely a certain vehicle of mine which has a hub motor and would appreciate a Sensorless Jasontroller – but more on that tomorrow.

[1] (numbers used: 350 rpm on a 28″ bike wheel, yielding almost exactly 30mph, which is pretty speedy for a stock electric bicycle, and assuming the motor has 48 poles).