I’m sort of in love with these Jasontroller things lately, honest. I guess it’s because it temporarily relieves me from buggy controller duty and it’s already better than anything I foresee myself building in the near future.

The last time RazEr was mentioned, it was rolling on nice new wheels but with a miniature house brick stuck to the back half of the deck. That’s the sensored shady e-bike controller that I picked up in Singapore. For a while, I had bounced around the idea of just mounting the thing inside. The board in those controllers isn’t that large – it’s the aluminum case that comprises most of the volume. But I ultimately took the controller off, tossing it in the box of EV parts, and RazEr was left a dummy for a while…again. This being the semester I have devoted to making sure more of my projects were working instead of starting endless new ones, I decided to dig it out and investigate everything again.

Embedding the controller was only possible if I switched batteries to something with better packing density. The A123 26650 cells are nice, but they’re not the best if I need more volumetric energy density since there are huge gaps between the cells, even in the “close pack” configuration. 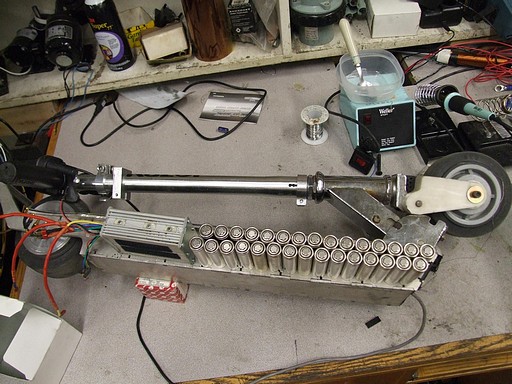 I started playing around with various arrangements in CAD and in real life. I used some spare surplus 18650 type Li-ion types to gauge just how many cells I can stuff into RazEr while either maintaining or improving my pack capacity. I could, in fact, fit a 3rd “row” of 18650 cells in the center of the frame where there is a cutout in the aluminum structure. With 16 cells per row, I could maintain a 12-series (38.4v) pack.

Testing with the Sensorless Jasontroller revealed that it handled RazEr’s hub motor extraordinarily well. It was significantly quieter and smoother without sensors, which boggled me for a while – but the sensors in the DNIR are known to be placed with some angular alignment error. Sensorless commutation also seems to let the motor run at the speed it “wants to” instead of forcing it to be hard-switched by changing sensor states, especially if those sensors are mistimed. So the decision was made to drop a 350w type Jasontroller into RazEr instead, and keep the sensored controller around for other, more mundane tasks, like Kitmotter. 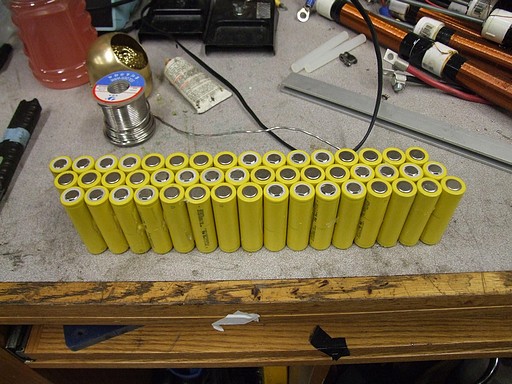 The actual cells to be used are A123 18650 cells, each of 1.1 amp hours. While it’s not like one of those brand spanking new Panasonic 3Ah 18650 cells, these are much less likely to set on fire and are more tolerant of abuse, because A123 . The actual pack is roughly 1.5 inches shorter than the 26650 pack and with 4 cells in parallel, I don’t really lose any capacity. 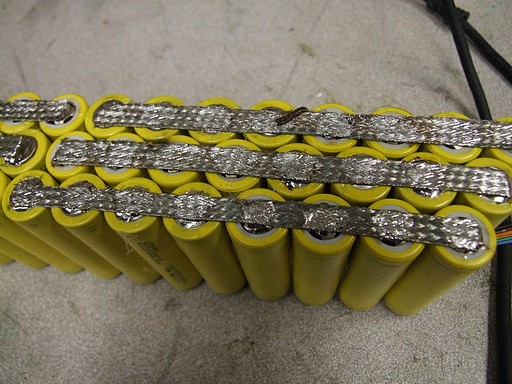 I really like these cells, because not only do they pack better, they respond better to Angry Soldering Iron. They’re definitely much easier to solder, and I really had to exercise my touch-and-go battery soldering. The upside of making a ‘strip pack’ is the fact that I get to drop a single piece of braid across 8 cells and have a 2-cell, 4-paralle string in the end. This pack went very quickly – in fact I spent more time making those damned balance connectors. 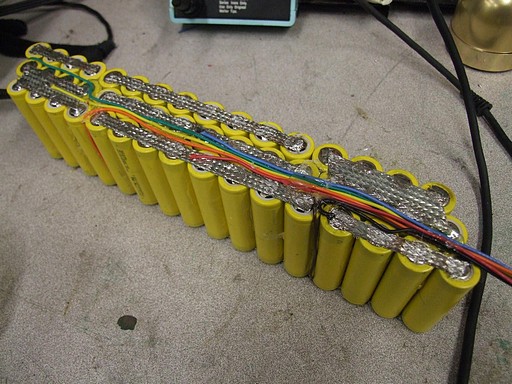 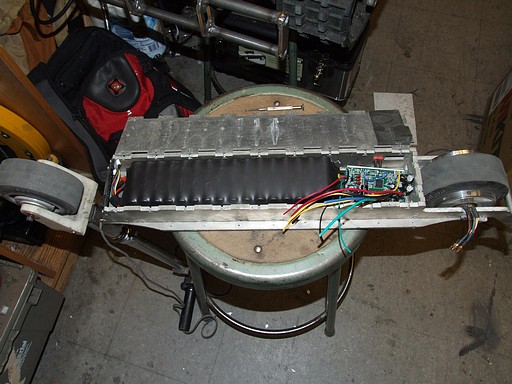 After finishing, padding, and heat shrinking the whole thing, I got to see how well the new pack fit into the frame. The cell parallelogram is arranged such that the bottom layer is furthest forward, which gained me another half an inch or so to play with on the lower half of the frame.

A gutted and cleaned Jasontroller is also shown in its quasi-final location. I’m just going to seal the board and then mount it to the frame via the MOSFET heat spreaders. 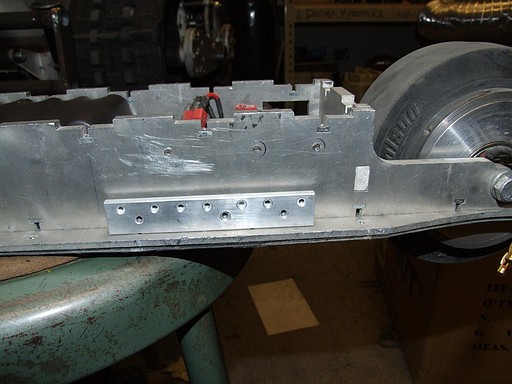 I used the heat spreader bar as a template to drill holes into the frame such that the board was out of the way of the battery and also did not contact anything it wasn’t supposed to. 12mm long M3 socket head cap screws were used to attach the controller to the frame. 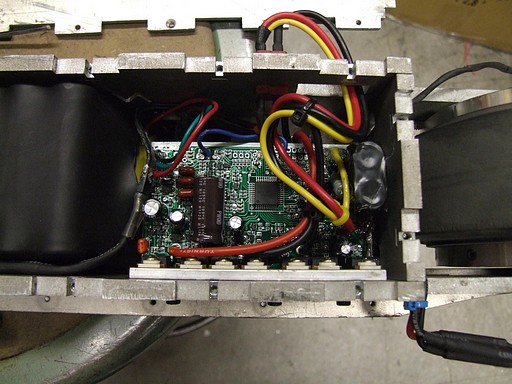 And the controller is mounted (but not sealed in Goop or anything yet). I ended up making new leads for the phase outputs since the existing ones weren’t long enough to reach under the board and out of the Hole of Wire Clearing. I laid some silicone heat transfer compound between the heat spreader and the frame, so it should have the entire frame now to warm up.

I elected to leave this 350W Jasontroller unmodified power semiconductor-wise, but jumped the shunt to 1 milliohm in order to bring the power output up to par with the DNIR’s capabilities. On a Wattmetered run, I managed to pull 1200 watts from the thing – so close enough to 1milliohm it is.

RazEr now pulls hard enough that it will almost wheelie if I’m not careful. Right now, it is almost on par with melonscooter for speed – which admittedly is a little frightening. 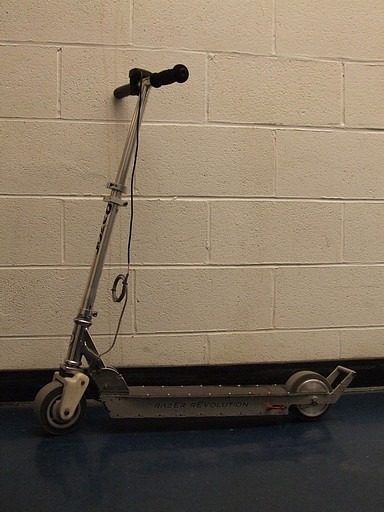 And the final ‘press shot’. Maybe I can even install a real switch again!