There’s been relatively little site activity lately, mostly because I’ve been diddling with minor and other in-progress projects, which will be detailed soon. I have a lower threshold of build report typing with respect to effort, so unless I’ve done something worth writing about or just stacked up enough work, I don’t update the site.

Testing Fankart has shown me that the battery was the limiting reagent. I’ve been using a 10S (37 volt) lithium ion battery from an old electric bicycle kit that we disassembled long ago at the Media Lab. It was clearly designed for long range, but low power operation, since it had all of 18 gauge leads. This was a battery with 6 18650 lithium ion cells in parallel as a single “cell unit”, so I know it can certainly dump more than enough amps to overwhelm the small wiring. In testing, the battery voltage routinely dropped to 30 volts from a full charge of 42, while flowing 60 to 70 amps in bursts.

Lame. I’ve been in a pinch for batteries lately – this same lithium pack, in fact, is swapped between Fankart and whatever else might need 10S at 9Ah, which includes two of my “minor supporting cast” EVs, the minibike and the heap-scooter (so called because it is a heap of shit). I also had another 10S, 9AH lithium polymer, cube-shaped pack, but that has been put out of commission after one of the cells went completely bad.

So what am I to do? Well, for the past year or so, our EV clique has been sitting on top (and besides, and between) a sizeable quantity of lithium iron-phosphate cells (the DeWalt drill batteries that everyone keeps hacking apart) which were originally a donation to the legitimate MIT Electric Vehicle Team (not to an il-legit experimenter like me, of course). I detailed some of this last year back when LOLriokart first gained unwarranted Internet fame. I had a box full from the “sampler plate” the Media Lab and EVT were originally given. It had been parked on top of my EV parts box since then. 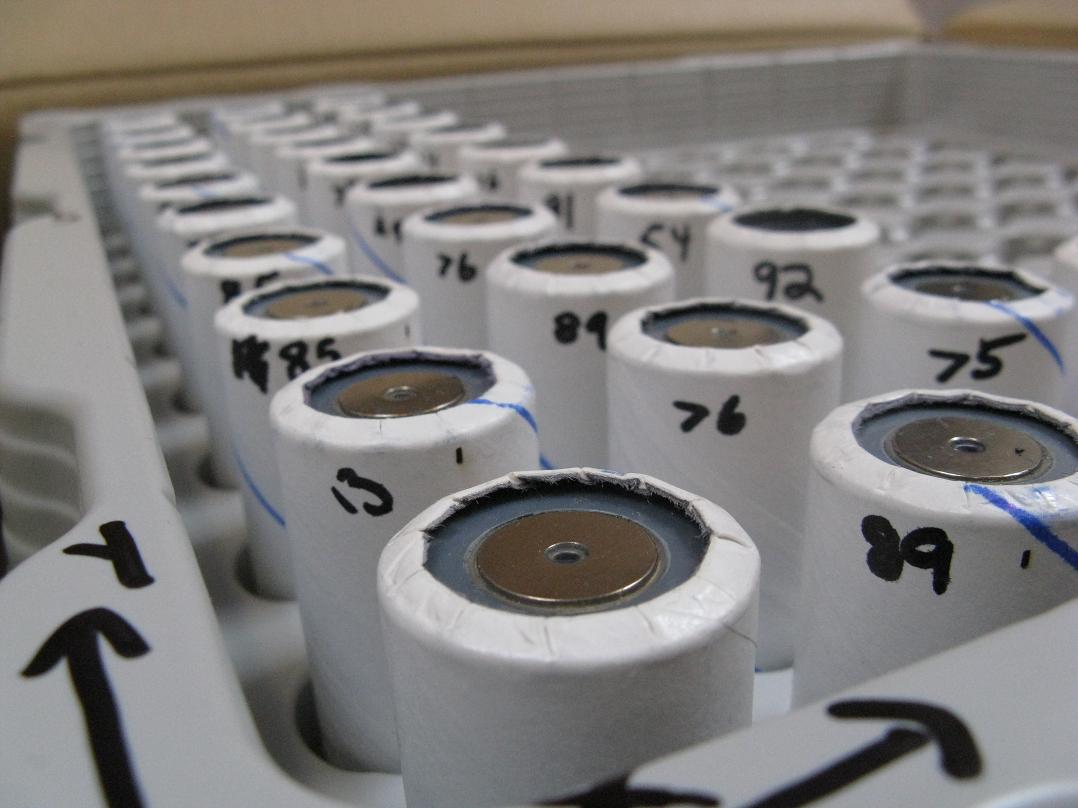 I’ve nicked some of them for Cold Arbor and Überclocker, but the thought of making a large pack out of them was still one relatively easy to suppress, since they were known to not be the highest grade of cells. I’d have to make sure they were matched in characteristics (or just not plain dead like 5 were to start with!) before puttting together a nontrivial pack, else I’d end up with LOLrioKart’s never-ending battery tragedy again, except this time with more alkali metals.

But I finally caved. A resource which most DIY engineers would kill for just sitting in a box is totally not me. The usage experience of peers and The Internet At Large has shown that LiNP batteries aren’t nearly as fragile and temperamental as lithium polymer packs. They don’t like to be babied and trickled charged and balanced like lipolies – or at least, careful battery management system design is less critical for casual use. Plus, my awesome charger can charge and balance up to 10 LiNP cells at once anyway. I knew I bought that thing for a reason.

So I took the dive. 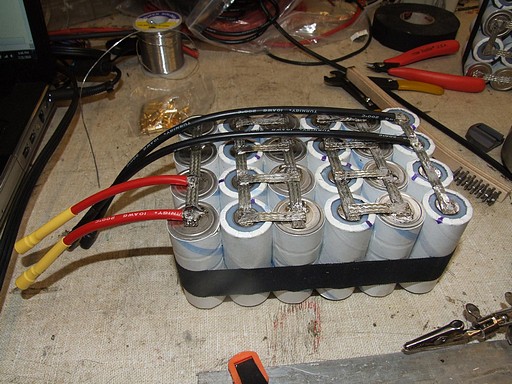 I had only one design goal with this battery pack – that it must equal or exceed the watt-hours stored in the electric bike pack. 12S LiNP cells is roughly 10S lithium polymer. Each cell is 2.3Ah, so 4 in parallel would be approximately 9.2Ah. But my charger can’t care and feed for a straight 12S pack, and it would also be unwieldy because of the size. Thus, I decided to split it into two 6S4P modules.

Well – two design goals. These modules should also fit in the minibike. You probably see where this is going.

Above is the pack in mid-construction. Each vertical column is 4 cells in parallel acting as a metacell. Cell selection and arrangement was a quasi-scientific process involving the following:

I used my favorite interconnects – grounding braid – to solder the cells together. Soldering these cells is a bit of a shady practice, but by using an 80 watt, huge chisel tipped iron, I was able to keep the “dwell time” per cell under 3 seconds, then move on immediately. It’s never good to park a soldering iron on a  battery, and on lithium batteries in particular, excess heat could melt the polymer separator which keeps your cell from shorting itself internally. 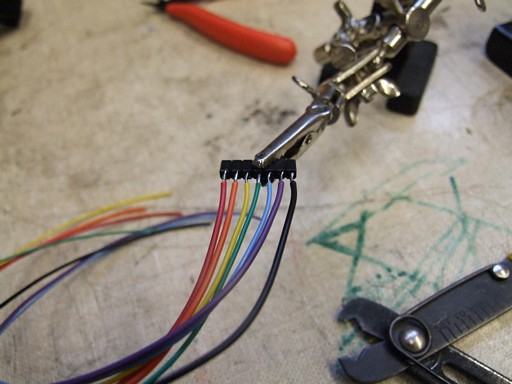 A 6 cell pack needs 7 wires on its balance lead. Luckily, MITERS had a ton of little 7 pin headers that fit perfectly into the charger’s balance port. Add a dab of rainbow wire and you have… I don’t know, gender-diverse batteries?

After adding the balance lead, it was time for closure: 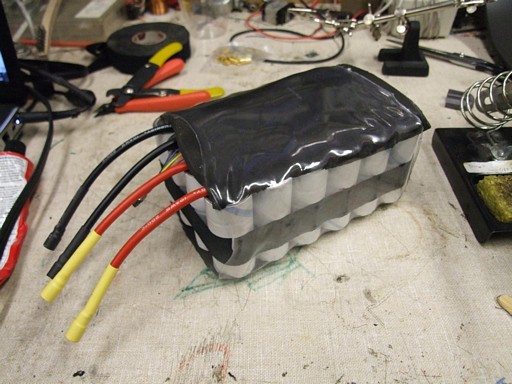 I am fond of the 2 liter soda bottle school of battery pack DIY. In this case, I actually had to buy (and subsquently empty out in a productive if unhealthy fashion) three-liter soda bottles.

The bottles are generally blow-molded polyethylene, so they shrink significantly under the influence of a heat gun. After it cools, the bottle material effectively becomes a hard shell for your pack!

As usual, I added foam rubber padding to the top and bottom before shrinking the bottle section around the cells. 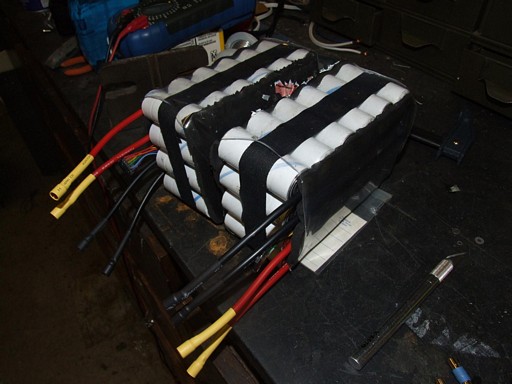 And suddenly, TWO \M/ËTÄLPAXXX. In all, this took about 2 afternoons and evenings of effort. Check the dual 10 gauge leads and 8mm bullet connectors for when I need to sink some more amps.

After I finished each pack, they were put on the charger/balancer and left to ripen for a while. 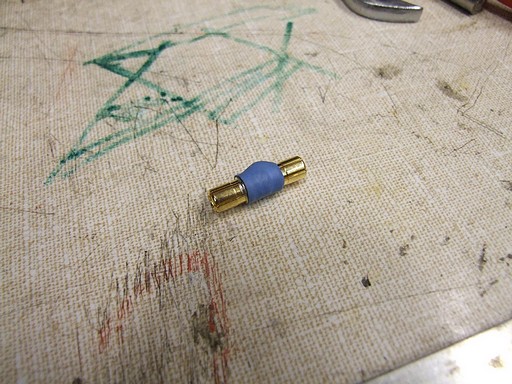 For common sense reasons, I used only female side bullet connectors on the modules.  But if I were to connect them in series, I’d need to join two of those together.

So, I made this bullet-bridge using 2 male side connectors soldered literally back to back. 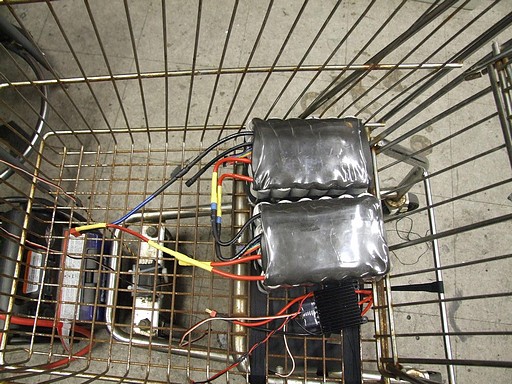 I changed out the prop adaptor bolt to one which was drilled straighter. For the longest time now, the hub has a mild but disturbingly visible wobble because the original prop bolt. The second bolt I made was much straighter because of better machining practice. Past that, the electricals remained the same, and the fan was re-taped to the underside of the cart body. 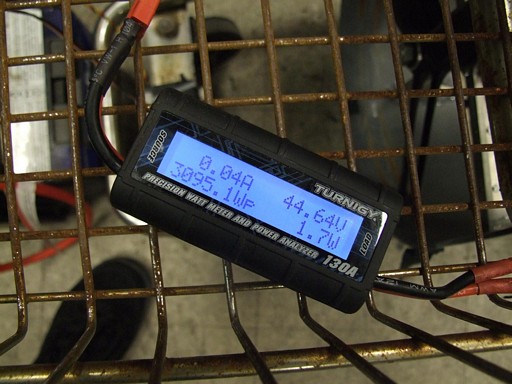 Best run yet! The \M/ËTÄLPAXXX held at 41 volts under 75 amps of discharge, which beats out the old lithium ion pack by far.

Knowing the no-load voltage and the under-load operating point means that I can sort of calculate the system resistance. The batteries dropped from 44.6 volts to 41 volts (3.6V drop) while flowing 75 amps, so the resistance in the system is 48 milliohms. Not bad.

and then the whole thing 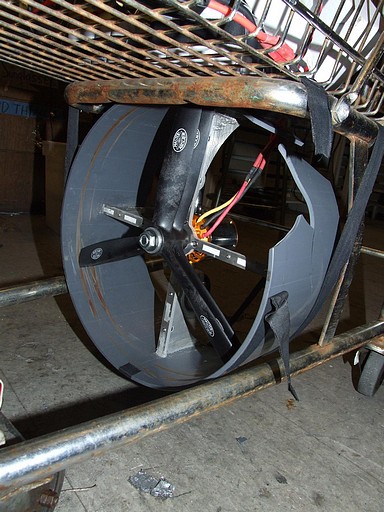 I was just barely out of the Plane of Interdiction before the duct shattered into a few large pieces of PVC shrapnel.

The failure was almost instantaneous and occured at about 75% throttle. I never got a RPM reading on the propeller blades, so all I can say is that they sounded “much faster” this time around.

The impact knocked the two props in line from their original 60 degree offset! 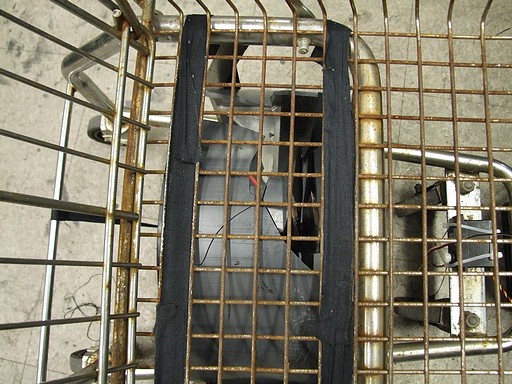 And the aftermath from the top.

Theories about the failure range from deformation of the props themselves at high speed such that they hit the duct (which seems to me like that would result in a prop failure too) to the duct hitting a vibration resonance and deforming cyclically enough to slam into the propellors (my favorite) to the duct being deformed by the change in air pressure alone (seems possible, but out of my realm of comfortable guessing).

Or it could be the fact that the whole thing was suspended with tape. 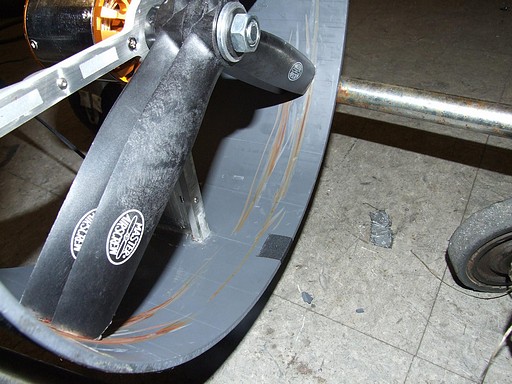 Lots of circular scrape marks around the perimeter and a weird red powder residue… neither prop nor duct is red in color, so what the hell is going on here?

Fankart might return later, built with more engineering and aforethought. But for now, the damage is terminal enough for me to finally put it away and start working on more productive and meaningful things again.  Like finding another home for my 12S4P giant ass-battery… I wonder where it could possibly go.

In the mean time, you should friend Fankart on failbook.

6 thoughts on “The \M/ËTÄLPAXXX (a.k.a The Decline and Fall of the Fankart)”