Fankart has turned out to be a concentrated form of the kind of projects projects I’m used to building. It was originally built as an engineering joke, it’s only been existence for a week, it’s utterly useless, and it’s already more internet-famous than it deserves. I mean, even LOLrioKart took a full year before people finally noticed how utterly useless it was. Then the Internet fame is at least somewhat warranted.

And RazEr has never been Internet-famous because it’s actually somewhat useful..

I don’t know what I keep working Fankart. Probably because the time delays between when I ordered parts and upgrades to when they actually arrived have all expired within the past week, so I had an essentially continuous stream of resources to keep working on the HFFan. In my opinion, the HFFan in its latest iteration (to be detailed, of course) has almost reached the limit of what I feel like building without actually engineering something. The whole point of the HFFan, originally, was to see what I could pitch together given only McMaster, Hobbyking, and laziness. To that end, it has accomplished more than I had planned. 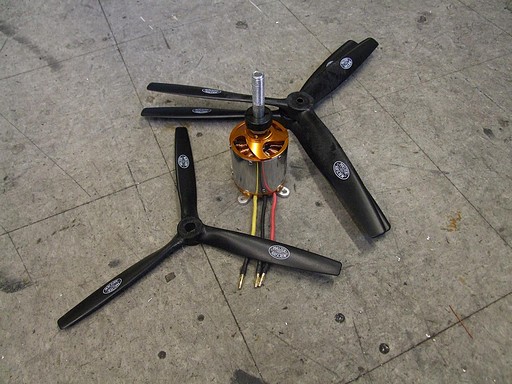 I got a set of 16×10 propellers from Hobbyking along with my latest impulse purchase. The accidental perspective makes it harder to discern that they’re larger than the 13×8 props in the foreground – but rest assured, they’re bigger.

The idea is to cut these back down to ~13 inches in diameter such that the portion left retains most of the original’s steep pitch.

Oh, about that impulse buy… Remember when I was talking about the Hobbyking 80/100 “HKrunner” before? They are so rarely ever in stock that to actually see a positive number on their stock count is like sighting a carbide-tipped parabolic flute unicorn. But last week, it finally happened – by the time I saw it, there were six left.

Along with motors #3 and 4 for the HFFans, I snagged two HKrunners. The shipment at this point was probably a few kilos short of when it had to go ocean mail, and shipping fees came out to $100 alone.

My bank probably just shit itself and wiped using my checking account. But, now I have two HKrunners.

What ever will I do with them? 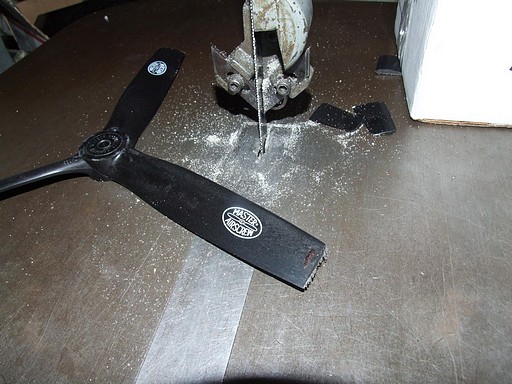 HKRunners aside, I began on boring out and trimming the propellers.

Problem: Even the largest lathe I had access to at the time couldn’t…er… swing the props, since they were too large in diameter. And so, I had to cut the tips off using a bandsaw first. The line indicates roughly where “13 inch diameter” is. 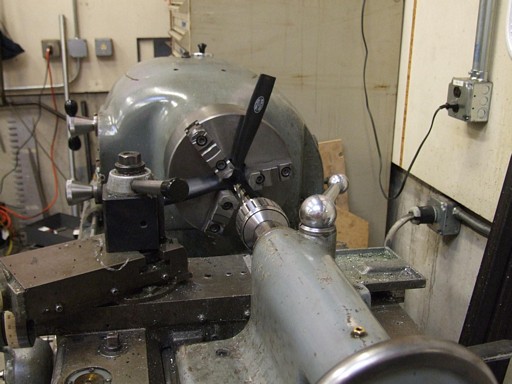 Then came the drill-to-12mm process on the heavy \m/etal machine. 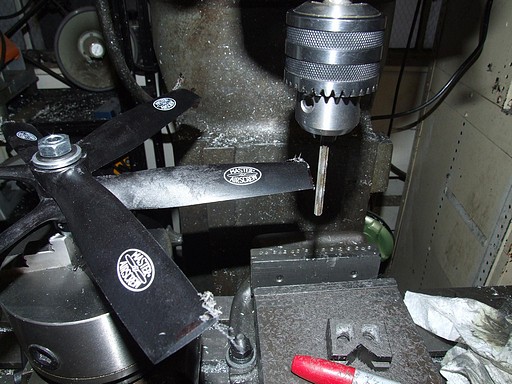 The fine trimming process was the same, except this time I used a straight-fluted cutter on the highest speed to avoid the up-and-down flapping of the prop blades that had occurred last time.

The straight-fluted cutter in question was actually a reamer. 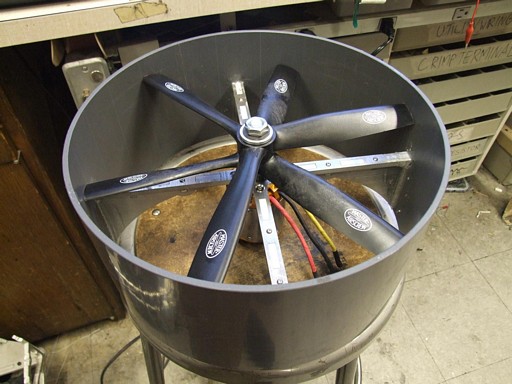 … and the new props drop right into place! 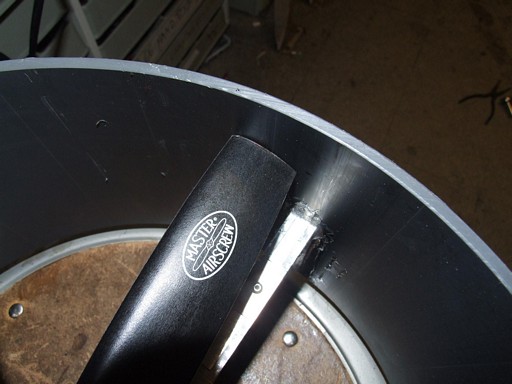 The tips were trimmed to less than .02″ clearance this time. Legitimately, I mean – last time, I forgot that endmills have diameters, and came up 0.050″ too short! 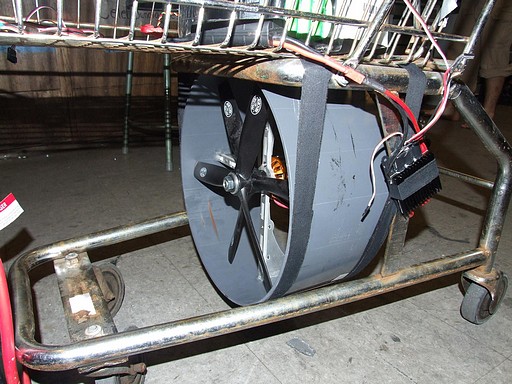 Here is the HFFan with the new propeller setup and a new lower mounting position! It turns out that the whole thing fits snugly between the uprights on the cart frame, blocked from forward movement by one of the basket spars.

The same fiber tape I had used to retain the duct in arrangements past sees a return here, pulled as tightly as possible. The whole setup is reasonably stiff, despite not looking like it should be.

Hey, at least now the basket is empty and ready to accept groceries! 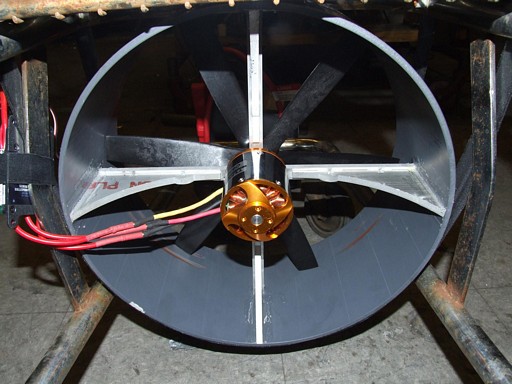 Note the scrape marks in the duct – it turns out that even though trimming the props to sub-millimeter clearances was done with the best of intentions, the high-tension tape mounting still causes the thin PVC to deform some.

I decided to not play the tension adjustment game and just let the prop break in its own duct by running it at full bore until the skull-grinding noises stopped. Now that‘s engineering. 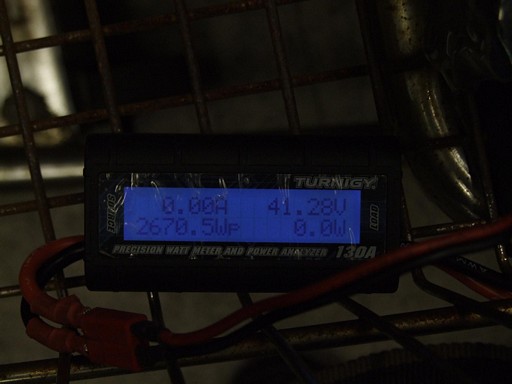 The heavier pitch, longer chord, and tighter duct are all reflected in the increased power draw. Clearly, the 18 gauge battery leads are the bottleneck in this system – the voltage drooped to 31 volts under the highest load. Should it have held relatively steady, I would probably have seen the 3 kilowatt mark. 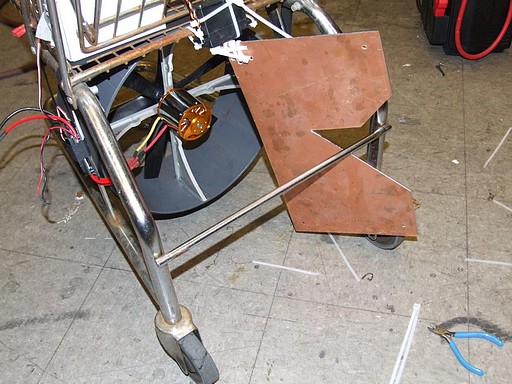 After I got sick of retying the front wheel knots (or having them retied), I started throwing together other possible solutions for steering. One of them was this dead-fish-esque rudder, made by zip tying a cut piece of copper-coad fiberglass board to a servo zip tied to the frame. 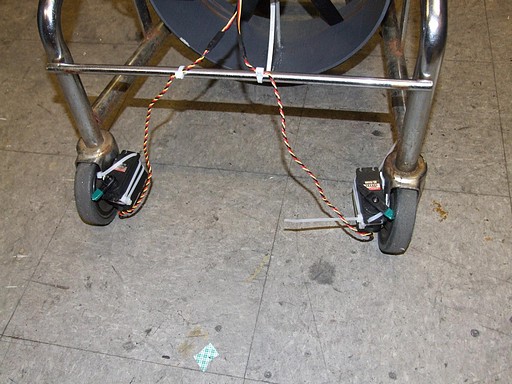 Next, here is differential failbrake. Real airplanes generally use differential braking force to turn using their propellers or jet engines (for single engined planes), so I figured why not try it on fankart?

Well, it would have  probably worked if the brakes weren’t raw servo horns, the servos weren’t mounted with zip ties and tape, and the wheels didn’t have so much slop they could tilt 10 degrees off axis and still rotate. Those are some seriously worn-ass wheel bores.

All things considered, I just decided to retie the damned servo knot to test Fankart 3.

So here it is – the collection of test video from the past two days or so!

Yeah, that didn’t end well. Something about “night time and shadows obscuring the unforgiving curbside of life”.

There was no major (or expensive) damage to anything. The HFFan just flew off, and surprisingly, all the electronics stayed in the basket.  Maybe I’ll throw it back together and actually try testing during the day some time… New concept, I know.

What’s next for Fankart?  I’m not really sure, but one of things I still want to do is get an actual thrust number on the HFFan. If it’s two digits, I’ll consider making more. If not, it’ll become the next high-five machine. I’m pretty stoked by the fact that the latest HFFan could accelerate the whole thing up a roughly 6 or 7 degree ramp faster than the previous could accelerate on flat ground.