Hello Internets. I don’t know why you’re so fascinated with random things I throw in shopping carts (probably because of LOLrioKart), but I think you should check out my projects which have marginally more value to society (debatable, of course), such as RazEr or its ‘blades derivative. Or the battlebots. Or hell, even my dumb glowing safety goggles.

But anyway, here’s Fankart in its latest mid-engine flying configuration. 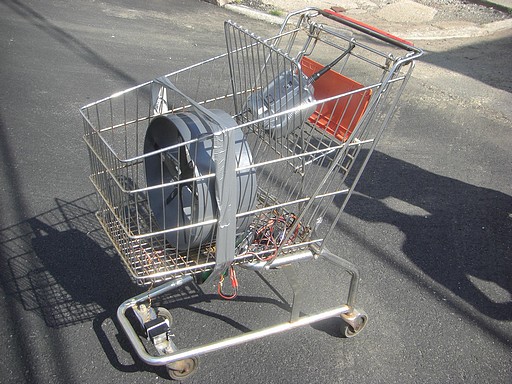 After the epoxy joint failed, I busted out my all-time favorite adhesive – Automotive Goop – and rebonded the motor mount to the duct. The new joints are substantially stronger and have the benefit of being mildly flexible, such that squeezing the duct no longer caused brittle failures. The battery was moved underneath out of packaging issues, and the fan now sits in the basket, retained by the pressure of being shoved between the wire basket frame, and by a (difficult to see) fiber tape strap that goes underneath the structure. And by virtue of its own thrust.

No videos of this version yet, nor any thrust numbers from the fan itself. I’m going to build a thrust-measuring rig (scientific rigor to be determined) to see what the specs on it are. Two 16×10 props are also on the way, so expect more  ファンカート!!! action later.