Reason #1 to not engineer things at 5 in the morning: You think that putting hub motors on inline skates is actually a good idea.

Reason #2 to not engineer things at 5 in the morning: You forget how many magnets each hub motor needs, and like a total dumbass, only order half the number you need.

Well, guess who is guilty on both counts. Late in June, I put in a reorder of the custom arc-segment magnets that I got for the first two skatemotors from SuperduperfabulousMagnetGeorge. Each motor takes 7 “north” magnets and 7 “south” magnets, where the designations just describe which pole is on the inside face of the arc. So, I ordered 16 magnets in total, 8N and 8S, so I have 2 spares in case I break something.

If you’re keeping track, the left RazErBlade has 2 motors. That means I only ordered enough magnets to make 3 wheel drive skates. By the time I discovered this minor oversight, it was already two weeks ago, so I hurriedly put in an appended order. The custom magnet service has a minimum turnaround time of 3 weeks, and there was (at that point) 3 weeks left until Otakon. Now there is one, and I’ve been informed that my appended order will ship next Thursday.

You know, when I leave for the con. Clearly, this was not going to work at all.

And so I deployed the backup, pain-in-the-ass-but-it-would-get-them-moving plan, and dropped some more dimes on a set of rectangular magnets for the left side motors.

Using GoBrushless’ excellent rotor magnet placement calculator, I discovered that SMG’s stock 20mm x 5mm x 2mm magnets were a good fit for the can if I doubled them up side-by-side. They would require some spacing games, but I was used to playing that with RazEr anyway. 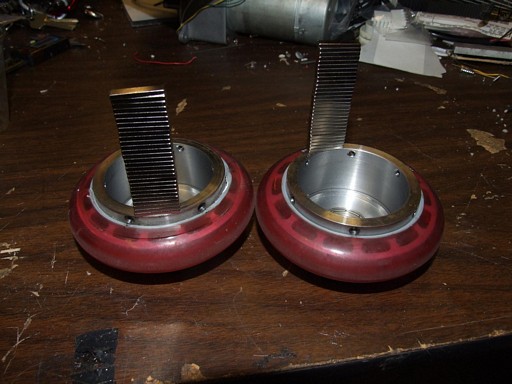 And here they are! I got the shipment notice 90 minutes after I entered my order – that’s essentially on par with McFaster-Carr. Due to the miracle of express shipping, they were in my mailbox the day after. 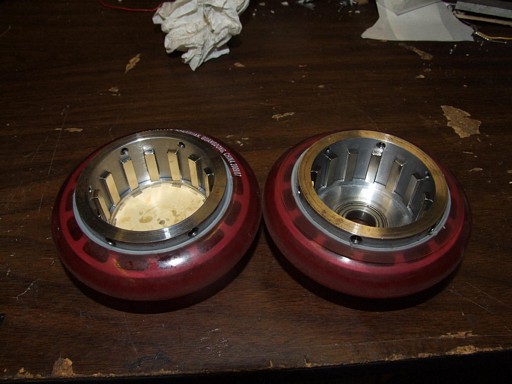 I printed out the generated magnet placer graphic to use as an epoxying guide. Step one is to put in the “keystone” magnets, the first 14 of alternating poles. Trying to jiggle too many magnets next to eachother, I have found, always results in unsatisfactory placement and a dent or two in the workbench from my forehead. 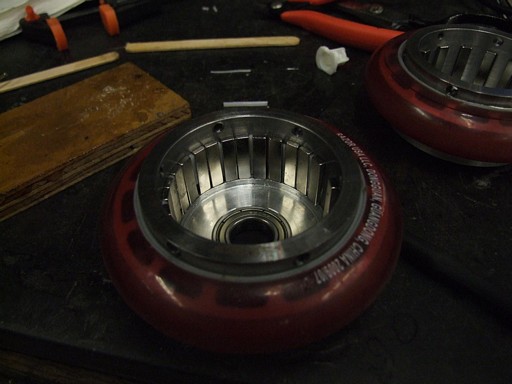 After the first 14 magnets set in each motor, I crammed their complements in next to them. Putting 2 magnets of the same pole orientation next to eachother means they tend to force themselves apart. To combat this, I wedged little plastic spacers into the horizontal gaps as I placed each new magnet. 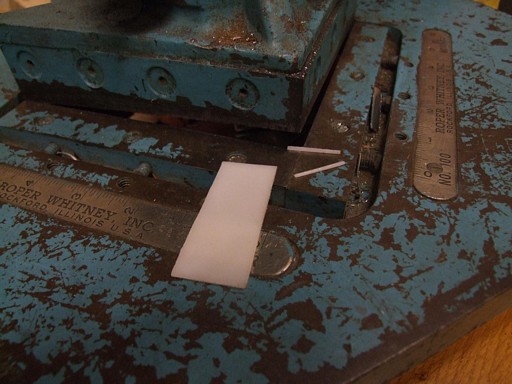 I made the spacers using a handy-dandy sheet metal notcher tool and some strips of thin unknown plastic. 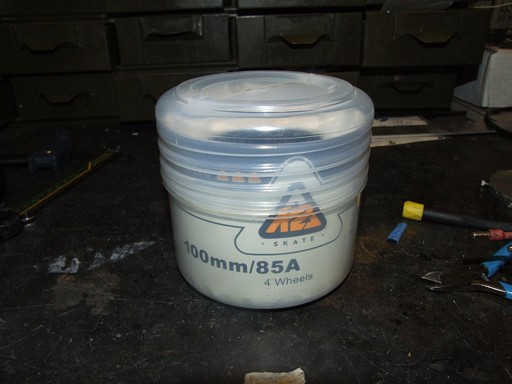 Usage reports from friends who actually are good at skating have told me that the 72-78A durometer scooter wheels are too soft to perform most skating maneuvers effectively, such as sliding or otherwise breaking traction.  So I wasn’t totally crazy when I thought the ‘blades handled like bricks – they actually do!

Solution: Hop online and find some harder compound wheels. I decide to upgrade one step and go to 85A wheels. Finding 100mm wheels was actually pretty difficult, since the vast majority of inlines use smaller wheels such as 72 or 80mm. Then came the issue of filtering those 100mm wheels to find the ones which can be hollowed out to 2.5 inches on the inner diameter, which was a requirement not met by most.

I finally located these K2 wheels on skates.com and had a pack rush-shipped (By this point, I think express shipping has almost matched the cost of parts for this project). 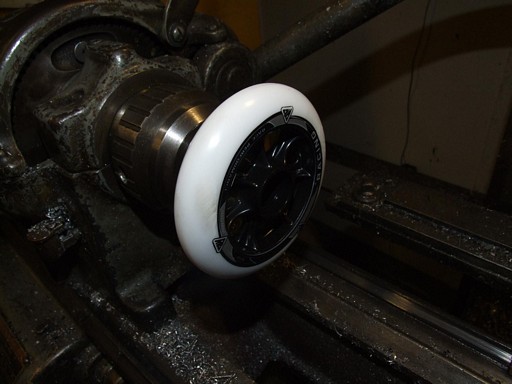 These wheels have a glossy, blank white tread and a black plastic core. Very plain, yet functional, and I was impressed by the quality and finish.

No matter, they’re going on the lathe NOW. I made a quick mandrel to grip them by their bores, since the urethane was actually too slippery to grip with the outer diameter chuck jaws. A flying pass with a boring bar severed the spokes from the outer part of the rim. 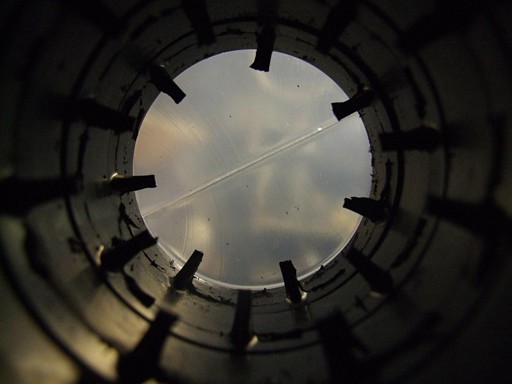 Well, mostly. The bar broke through at a place that was not the outer diameter of cut, so now I have these spoke stubs to contend with. When the shops with bigger machines open again, I’ll just knock those out by virtue of gripping the wheel’s OD in a bigger lathe.

This weekend (and extending into next week, likely, due to laziness) I plan to re-engineer the Skatroller to allow for manual activation of the DEC modules’ electric braking. My spare force-sensing resistor will be hidden under the original wrist-forward trigger point such that it will detect two possible states – willful activation of braking and the palms-open-oh-shit-i-am-about-to-die faceplant mitigation position.

Which, mind you, may possibly be mutually coupled.

I’m also going to switch the analog op-amp circuit to an Arduino Nano based solution, because it’s much easier to throw some if() statements at the two FSRs than try to play the AND/OR/MAYBE game with logic gates and linear components.

Did I just advocate the use of software? Doom.

Past that, I’m going to refine the power system of the Skatroller to use a single lithium polymer cell with a Lilypad boost converter unit. This ought to net me much more efficiency and subsequently battery life, as well as avoid stressing out the XBee by running non-spec voltages.