One of the compliments that RazEr always gets is that the vehicle is so freakin’ small. Its outline is the very image of a stock Razor (™,®,©, what-have-you) scooter, and most people do not notice the hub motor until I show them. They tend to try to look under it or behind the rear wheel to see where the motor is. The other reaction I get is more along the lines of what the hell was that, aroused when I fly past a group of unsuspecting and well-meaning pedestrians.

Novelty value aside, the size of RazEr is also one of its worst flaws, and the biggest engineering headache. The stock Razor A3 frame is just small enough to not really fit anything. The latest iteration of the scooter actually featured a fully custom underside so I could put meaningful amounts of battery in. The addition of this drop-frame compromised the stuctural integrity of the scooter significantly. The motor width is constrained to fit between the existing forks, which puts a limit on how much torque it can physically make, as well as makes it a pain to service or remove.

Given that, what would I change if I could start from a blank Inventor file and design the scooter frame from the ground up, while maintaining the pudgy kick scooter look as much as I could?

Before I answer that, let’s go back in time a bit to see what necessitates this total redesign. In April, I “rebooted” RazEr from a state of suspended animation (and total motor wreckage). The 2nd iteration hub motor was pretty much totally destroyed, save for the stator, which I recycled back into version 3, the present one.

During what was supposed to be a routine test ride just a few days later, this happened. 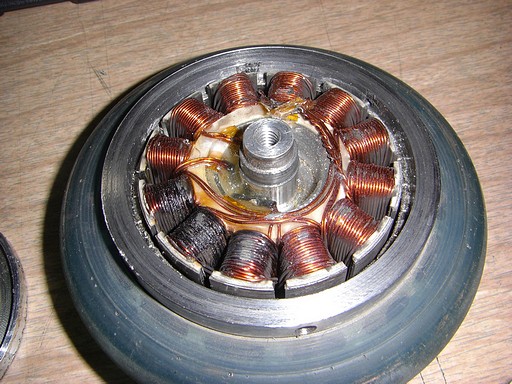 At the time, I was purposely riding over rough cobblestone to see what would break first. I had expected that perhaps the bearings would crunch again, or I’d vibrate a magnet loose. It turns out that the whole motor shifted on its bearings (which means I did an excellent job making sure that bore was a press fit…), and the windings started running into the conductive aluminum side plates. This grinding caused several windings to short and burn out. 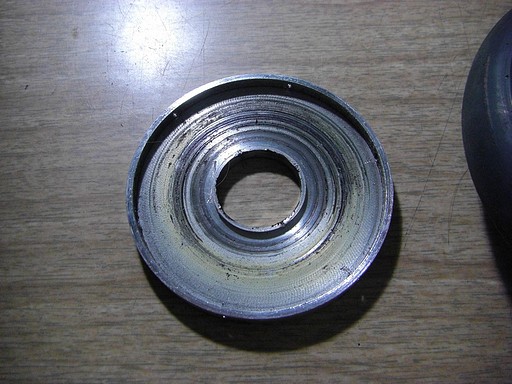 The arcing marks and smoke residue on the side plate is a giveaway as to the failure mode.

Afterwards, I hastily rebuilt the core using a spare harvested copier motor that had a stack 5mm shorter than the magnets in the can (-20% torque). I was out of 22 gauge wire, and only had 20 gauge, so I rewound the core using dual 20 gauge wire. The problem was that I could only fit maybe 18 turns on each tooth, which was significantly less than the 25 turns per tooth before – another loss of 33% or so. All things considered, this rebuilt core was complete shit.

Then I discovered during testing that I wired up the B phase backwards. So, I had to cut the termination and jump wires around until that phase was correctly hooked up again. The result after all this turmoil was a motor which looked like this: 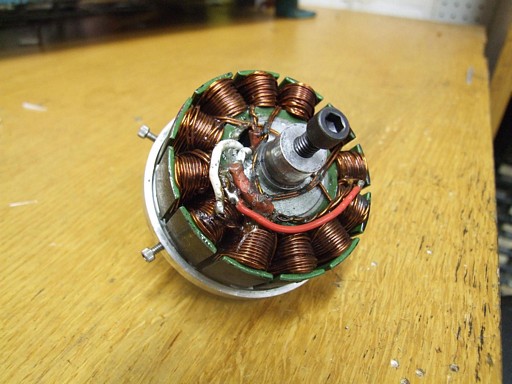 Okay, so it actually worked just fine, despite being terrifying. The loss of torque was definitely felt during rides, when acceleration was weak and current consumption was much higher than before. The controller’s runup to full motor start took longer and was less consistent. Things got hotter.

I was pretty unsatisfied, but that’s how RazEr’s been for all of May and June.

Enough was enough. I’ve been brooding over the build of a fully custom scooter for a while now. It would address all the volume and rigidity issues of stock kick scooters, while fitting my custom designed components with no compromises. Specifically, tt would carry a much torquier hub motor and enough A123 DeWalt drill cells to match or exceed the watt hour capacity of the existing 5Ah lithium polymer packs. It would be more heavily built and stiffer.

Yet I’ve always put the idea aside when it came up because I figured it was more building than I actually wanted to do.

Well, forget that now, because I’m sick of bumming around with toys. And after building the \M/ETALPAXXX, I’m a little less averse to the idea of making more battery packs. 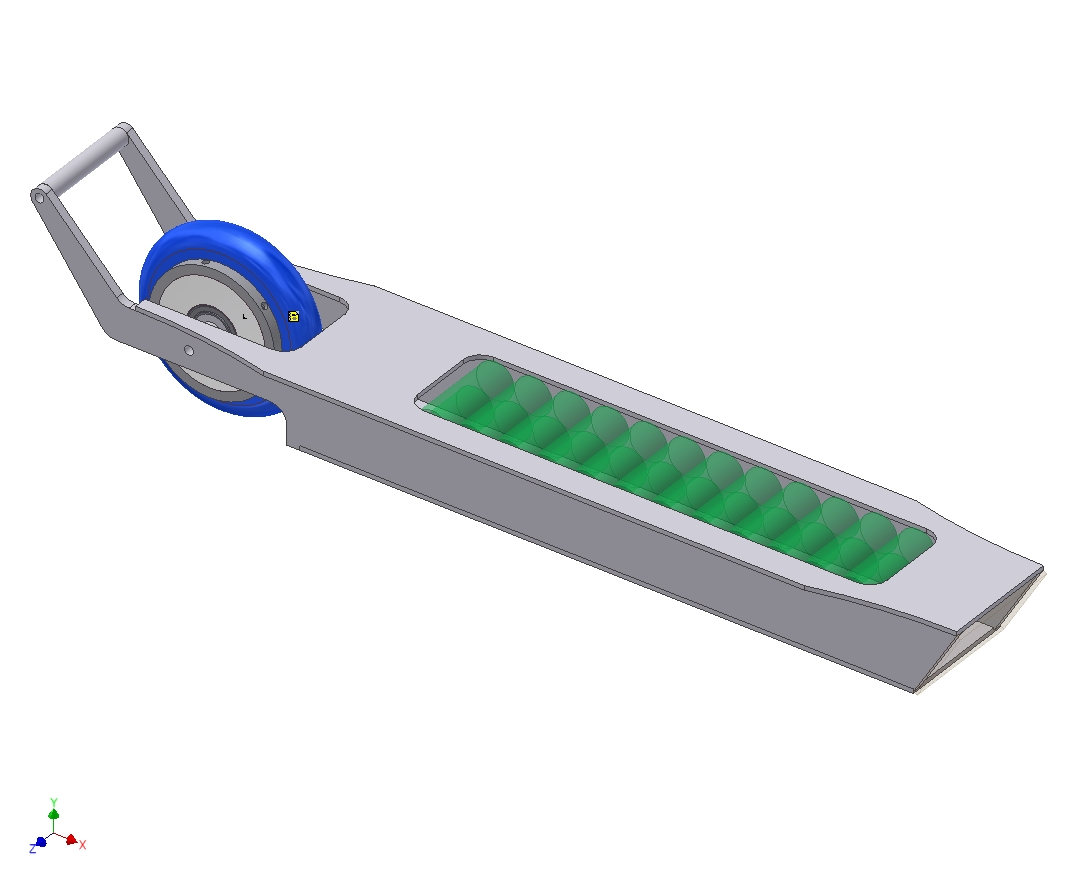 I always start with a very basic flat geometry study. Here’s the new frame at a pretty early stage. It’s still box shaped like the stock Razor A3 frame, and even has the front chamfer.

But what’s less visible just from a screenshot is the increased dimensions. The underbody is a full inch wider than a stock A3. The whole body, deck included is 2 inches thick (compared to around 0.75″ stock, and the 1.75″ depth of the appended underframe of RazEr).  This whole frame section measure 2 feet long from front to back, too.

Oh, and the wheelie bar is taller and more integrated. That’s important too, but basically, it’s what the A3 would be if it actually filled its outline instead of shrinking away from it in a cost-cutting induced anorexia.

Note the cutout in the top plate of the frame – this is to ensure available space to fit the 12S2P LiNP battery pack, which will clock in at a cool 38 volts and 4.6Ah. 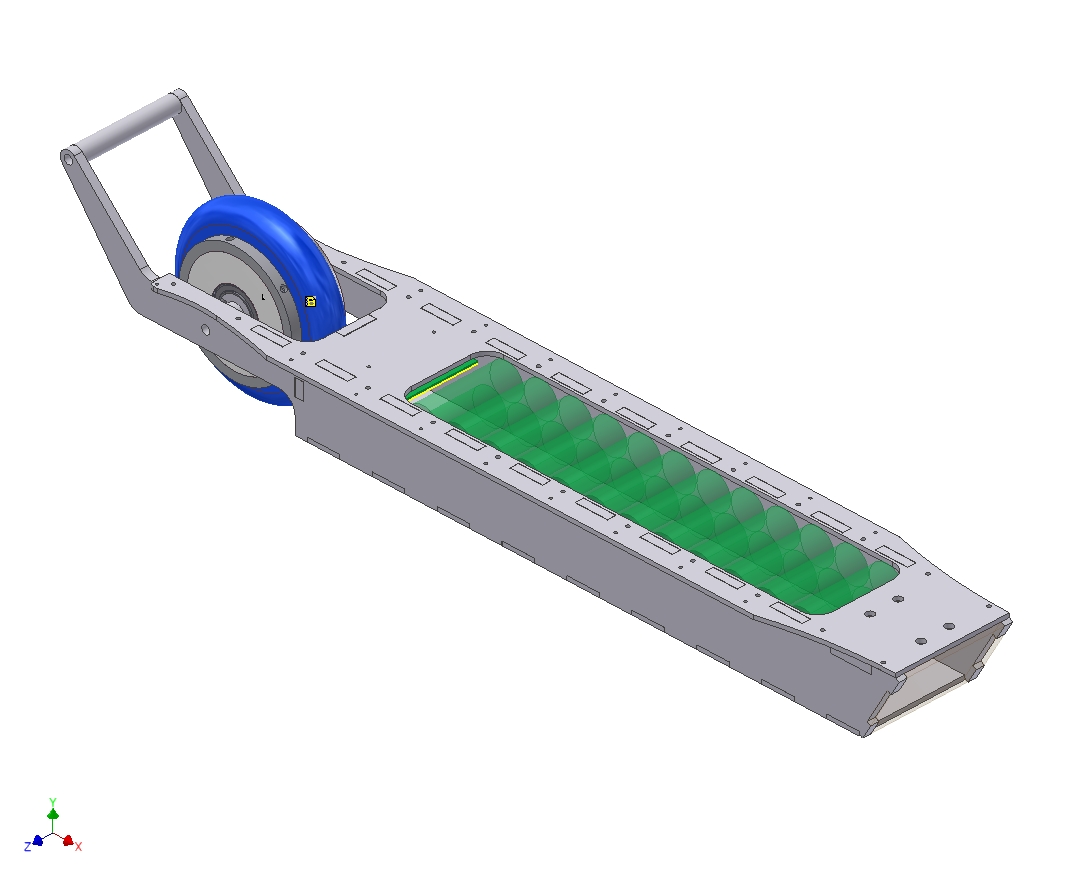 Now I get to the fun part – laying out where the joints of the puzzle will go. I’m going to continue on my spree of tabs-slots-and-T-nuts construction, which ought to make this thing come off fast on an Awesomejet. The t-nut slots haven’t been placed yet in this picture.

I’m only designing the business half of the scooter. The front end will be a stock A3 steering neck and folding joint, since that has worked fine in RazEr from the very start. 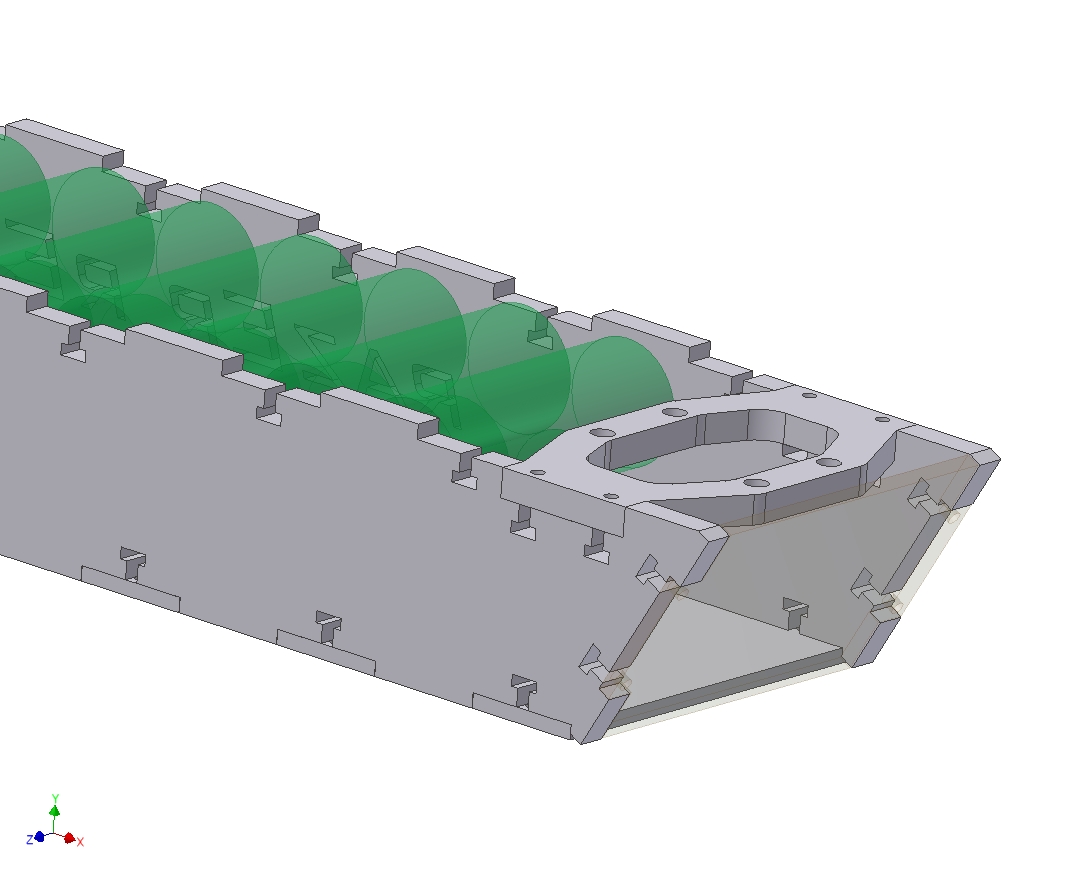 One of the issues with mating your own back ends to existing front ends is the rigidity of the joint in the middle. Razor scooters are generally pretty well designed in this area, but once you append your own design to it, all bets are off.

To promote structural integrity, I designed in this 1/4″ nut plate in the dead space in front of the batteries. It has the stock folding joint bolt pattern in it, and is otherwise physically interlocked to the frame. 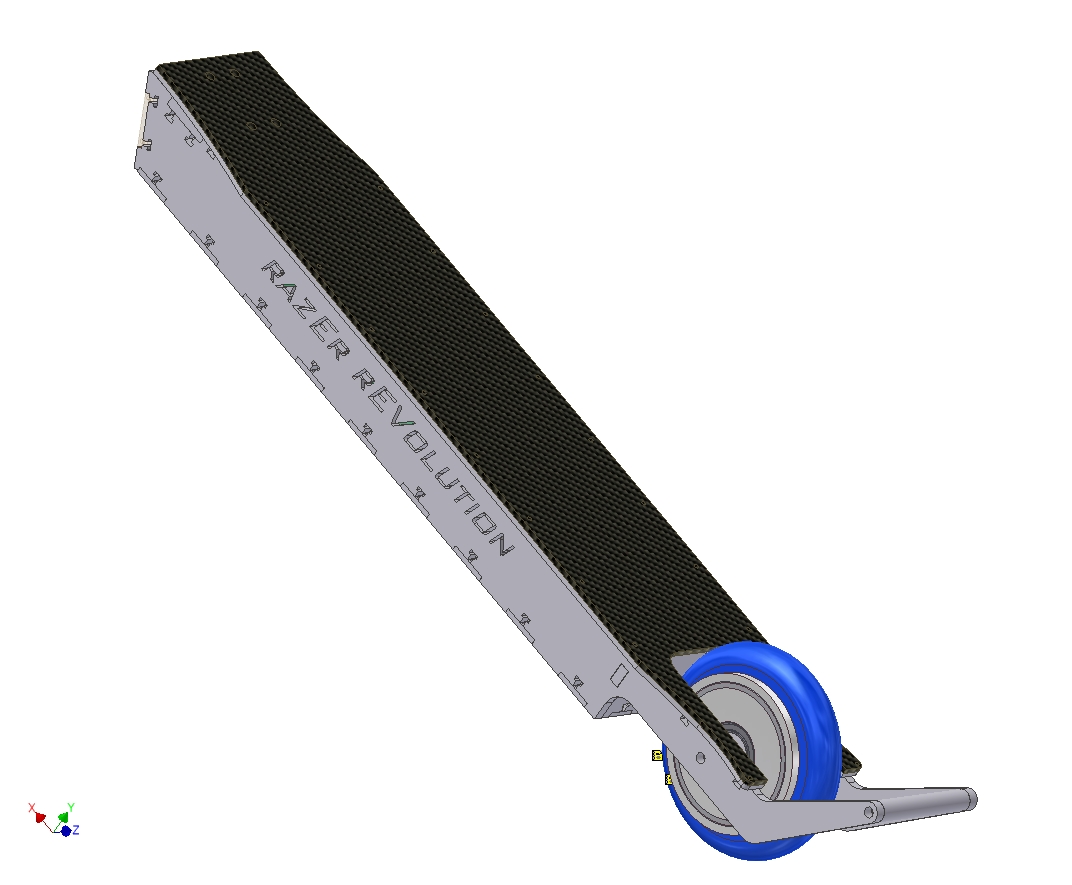 To address the whole “Hey, you’ll be stepping on your battery packs with that big cutout in the middle there!” problem, I’m going to overlay the frame with a nonstructural cover. The cover is shown rendered in carbon fiber, but that’s alot of fucking carbon fiber and I’ll most likely take the cheap way out of either 1) Garolite or 2) polycarbonate. Or the same sheet of 1/8″ aluminum if I’m that lazy. 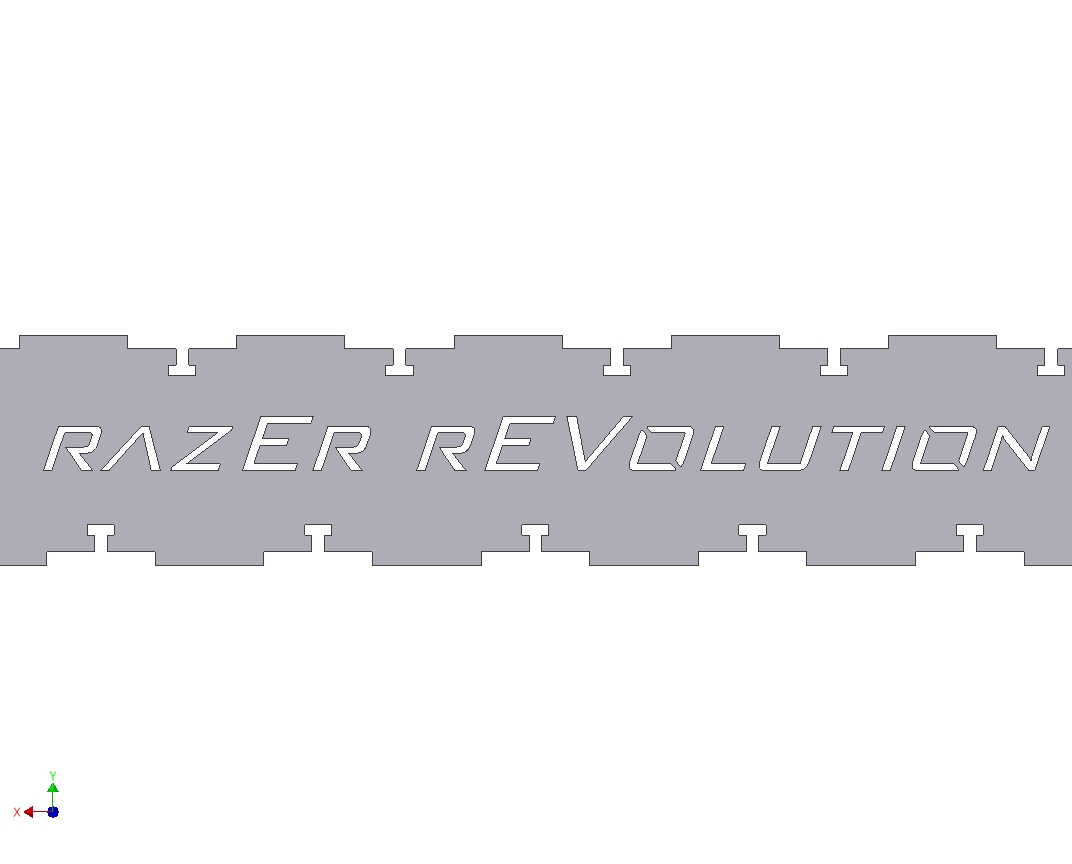 Here’s the  side text, modified after insertion to be “waterjet friendly”. Closed R’s, A’s, and O’s just make for a n00bly mess when cut out.

The “EV” in “revolution” is cleverly capitalized to be clever.

So the version 3 hub motor looks kind of cheesy in the screenshot of the new frame. It appears atrophied and undersized, kind of like putting 15″ wheels on a luxury SUV.

With the new frame width (three whole inches of between-the-forks space!), I’m definitely going to design a new motor to use it. 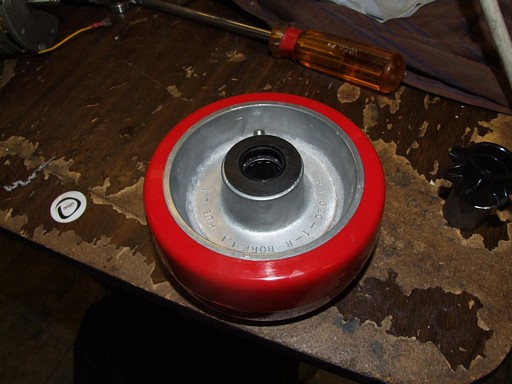 Originally a wheel investigation for BWD, it will now be used with the new new new! RazEr motor: 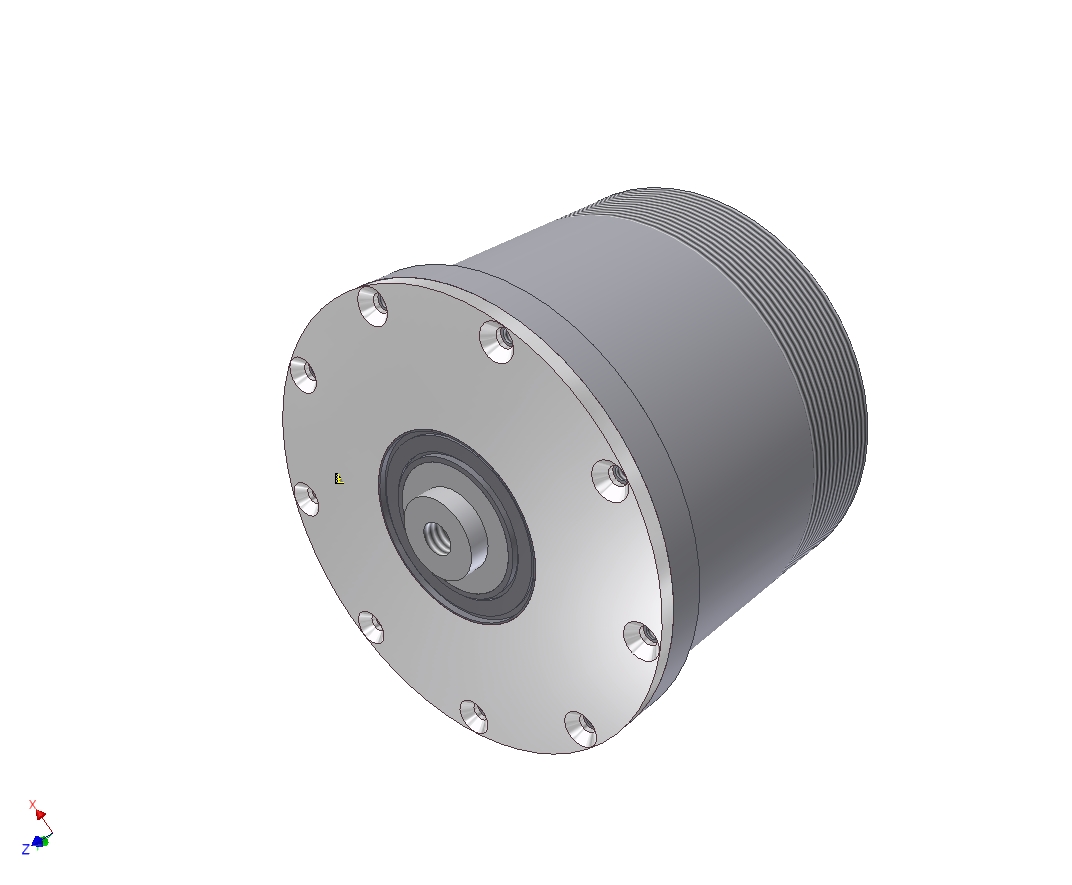 It looks like the V3 motor if I pulled on the ends really hard, and essentially it is. The one exception is the flanged endcap, which was a design investigation.

The stator will be 3 (count’em: THREE) stacked 67.5mm diameter, 17mm thick copier stators that I binged off Ebay a few months ago. The total lamination height is designed to be 46 +/- 1 mm, to account for lost laminations during the joining process. 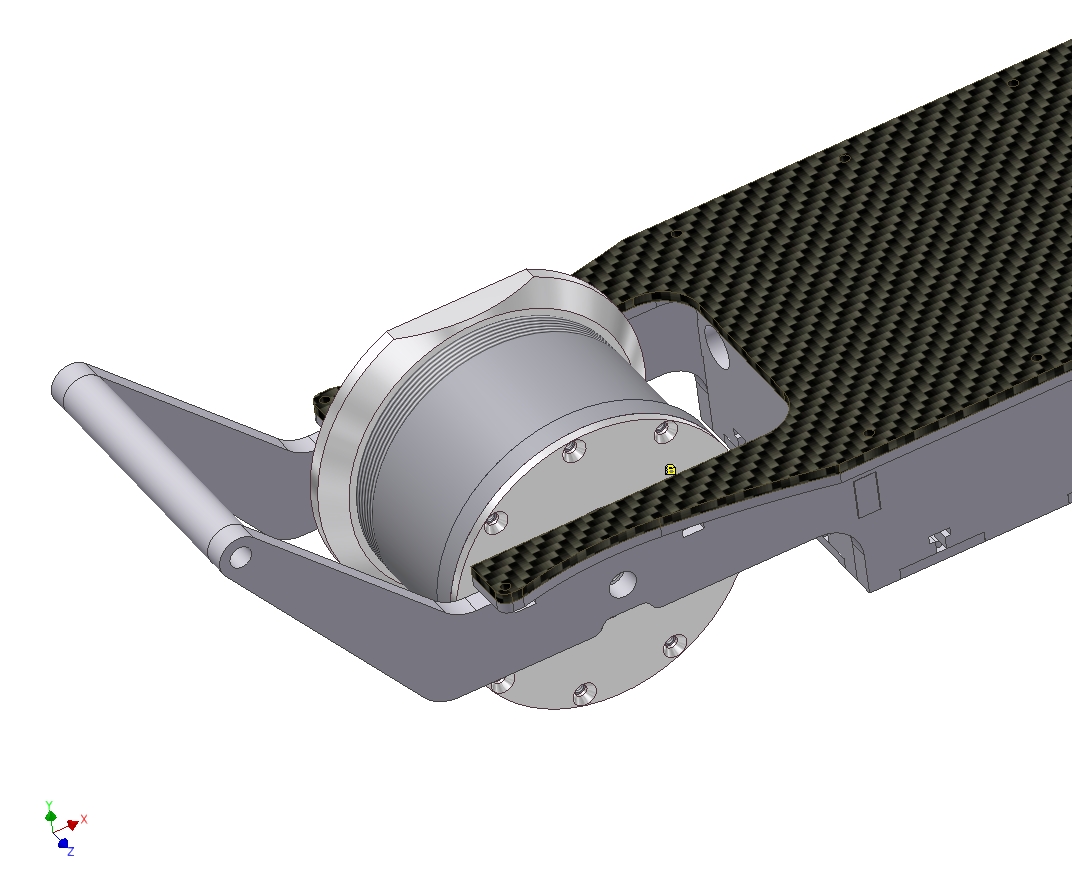 That looks so much better. It fills the space like a giant custom hub motor should do. Now I’m talking like 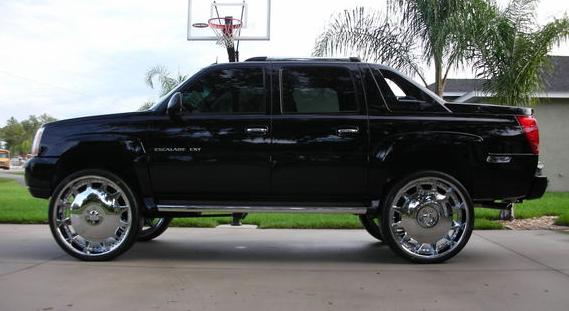 Holy crap, what if this thing had HUB MOTORS in those wheels?

Of course, one of the hazards of designing your motor before you actually get ahold of the wheel to measure it is 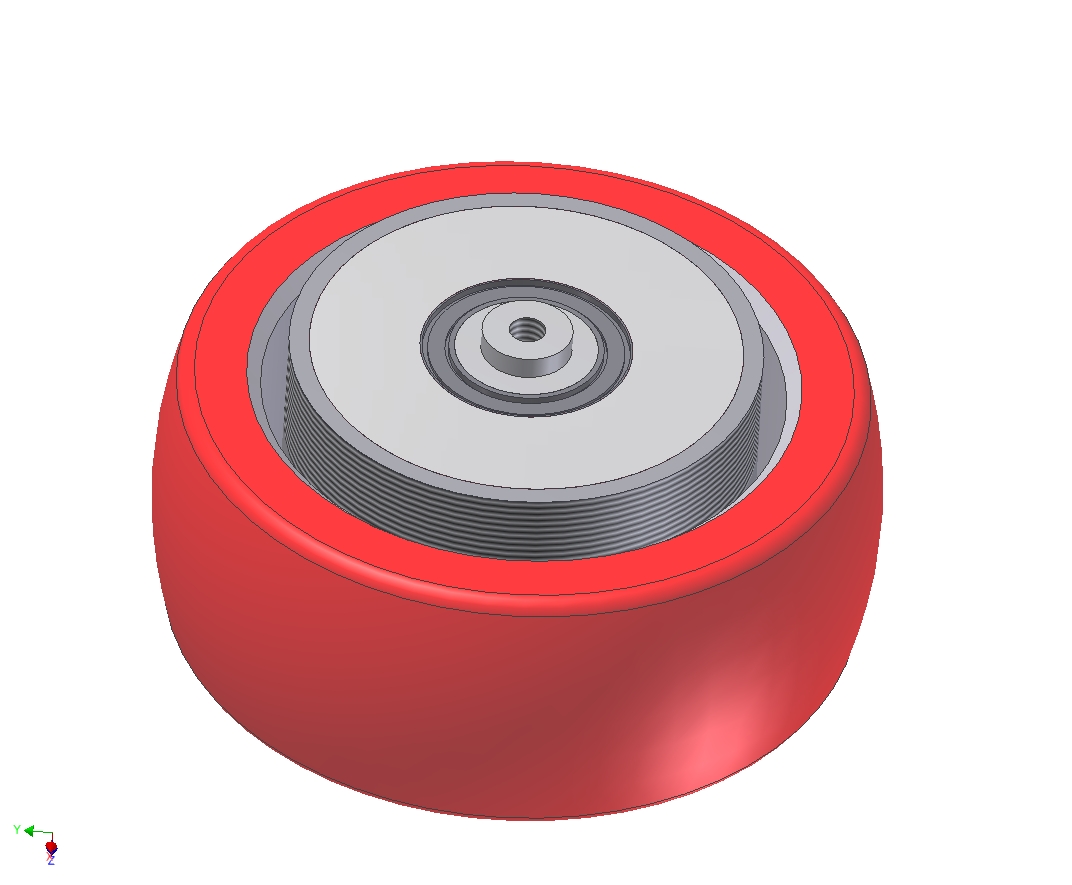 The tread depth turned out to be shallow enough on the new wheel such that if I cored the thing out all the way to the rim (past the relatively thin web center), it would just fall right through my motor!

The wheel could be bored to a diameter of 3.6 inches, but the motor is only 3.25 inches at the threaded portion, and 3.5 inches at the flange. I designed it to use my existing Deathrunner and V3 motor stock, which is a 3.5″ steel pipe. 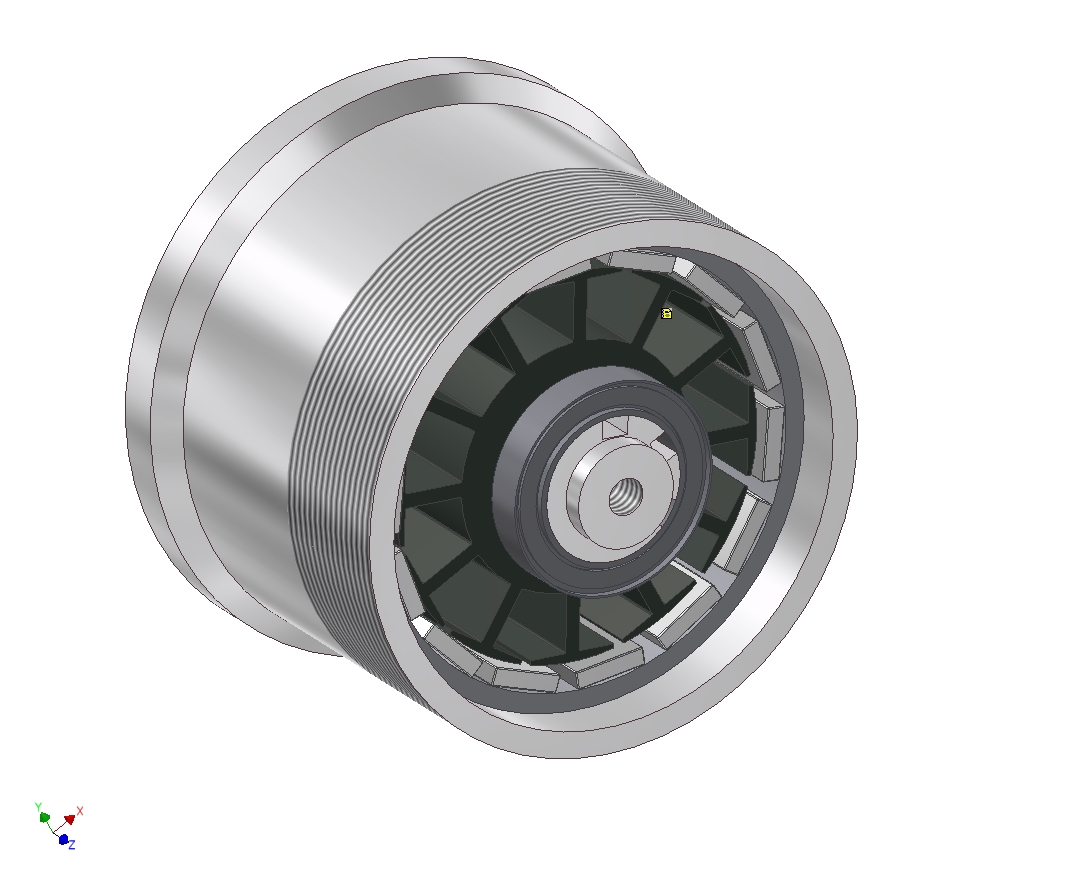 So here’s the 5AM hackaround… just shove that motor inside a plushy, shiny aluminum case. I ordered a 4″ diameter, 0.5″ wall aluminum tube to make the locking ring from anyway, and decided against ordering a huge 4″ steel pipe just to make the motor casing from. It would be unnecessarily heavy and would have taken very long to machine.

Instead, I could just chop a small section of the pipe I  had already and make it a magnet ring. From the 4″ diameter tubing would come the motor casing and side plates, as well as the threaded ring. The magnet assembly can then press or adhesive-fit into the casing.

The magnets were big enough this time (2 full inches wide, of course) such that it was out of the range of SuperdupermagnetGeorge‘s stock. I cruised the intertubules for a while, and settled on Applied Magnetics and their 2″ x 0.5″ x 0.125″ N42 chunks. A Gobrushless calculation shows that these are an optimal fit. 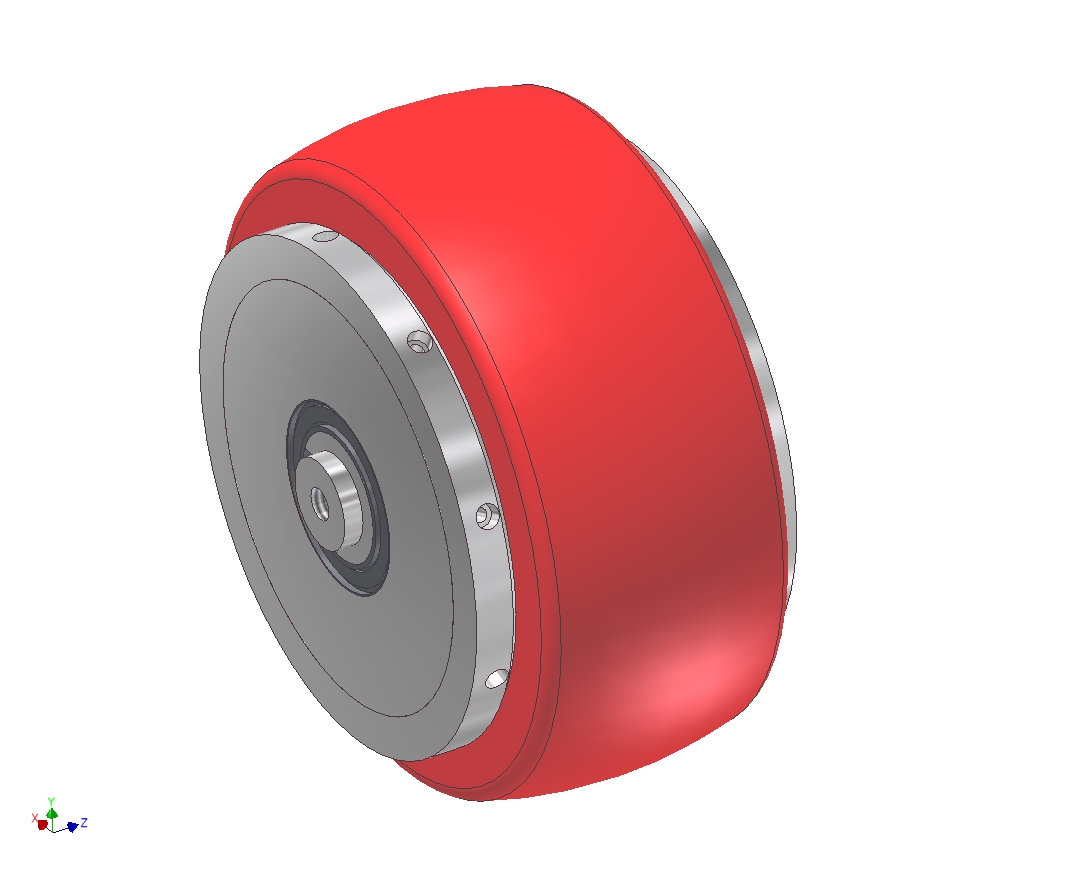 With the side plates, tire, and threaded ring loaded in, the whole thing looks ridiculous.

I went back to the cross-drilled holes method due to familiarity. I had 17 cap screw on that flange at one point in time (because more cap screws makes a project more hardcore), but fortunately returned to sanity just long enough to realize that I would only have the patience to machine 9 of them.

So there are nine. 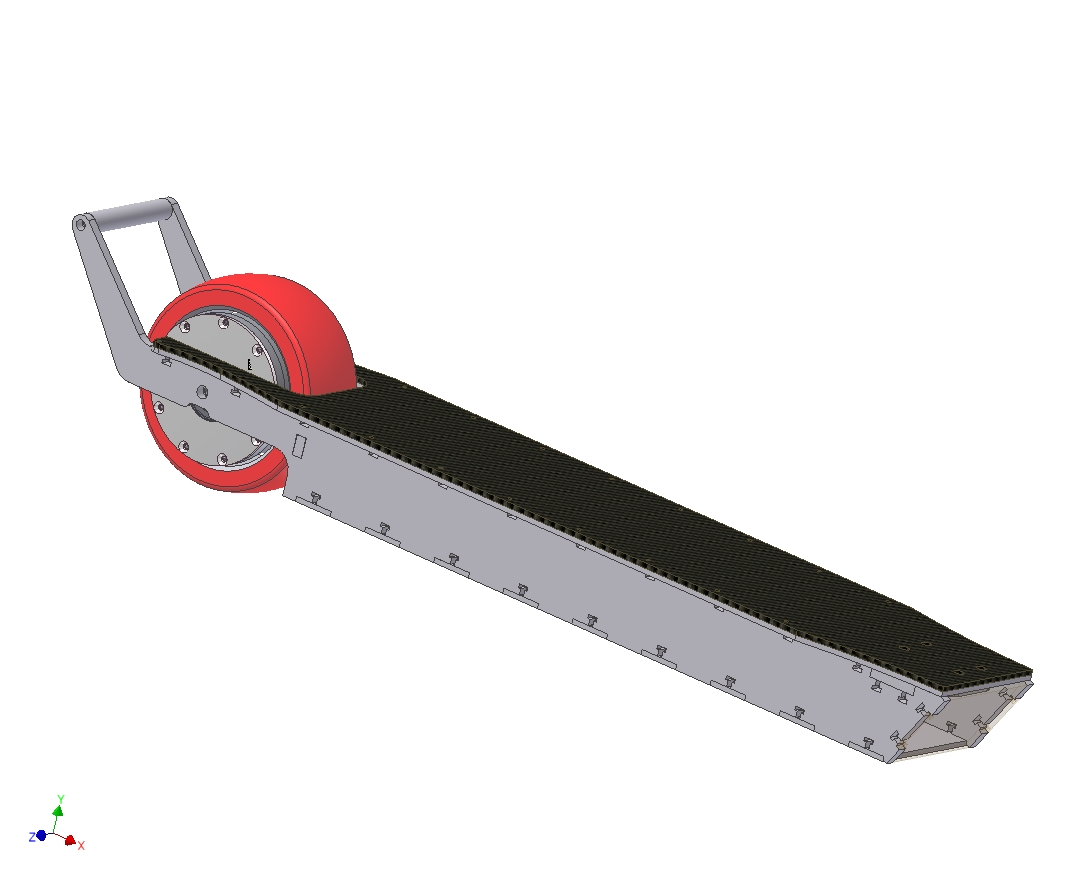 And now the whole assembly slammed onto the chassis model. I’m essentially going to be riding a small steamroller.

Let’s plat the nibbler game with the most recent dimensions. It’s a crude, unsound, faulty, but convenient way to ballpark the torque production of a BLDC motor. The dimensions are:

Still, that’s insane. RazEr’s v2 stator had a measured (not roughed out) Kt of 0.25 Nm/A. By direct scaling of the stator length, i.e. if I stretched that stator out to 45mm and kept all other parameters the same, it would have a Kt of 0.45 Nm/A. I suspect this is a more realistic number.

I ordered everything yesterday, scheduled for easy-peasy laid-back ground shipping. This means I can probably start plugging on the motor right after Otakon concludes (and the August robot season begins). Look out for this thing at Dragon*Con in September, since it’s small enough to throw into the same box as the robots.

Knowing me, though, I’ll just blitz the entire frame on Monday and shove the existing RazEr motor in there.

13 thoughts on “Hub Motors on Everything, Part II: RazEr rEVolution”