That’s it – I’ve cast the die, thrown down the gauntlet, brought the house, and so on. I’ve registered for Otakon, which, besides being a peer cloud adventure, will be a thinly cosplay-veiled ground test for the Deathblades.

That means I actually have to finish and get moderately proficient at the delicate exercise of not getting skullfucked by the ground. Fortunately for me, Advanced Circuits did finally come through: 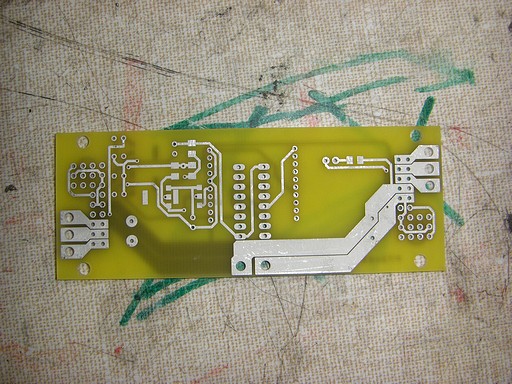 Check it out – it’s the updated Double DEC’er boards in AC’s nude color scheme. I elected to use their “Bare Bones” service because it doesn’t take very long. From the time I ordered (last Friday) to when I got them (today, Wednesday) was less than the time it took to get the SCHBs printed.

You know what – I don’t care if they have neither solder mask nor silkscreening. They’re conductive in the right places and insulative in the other. I can live with that… or give them a snazzy color scheme myself.

Unfortunately, when I said “waiting on you, Advanced Circuits” last time I actually meant “waiting on you, Digikey”. All the SMT and special parts needed to fill the Double DEC’er boards are in hyperspace at the moment, but they should rematerialize soon. 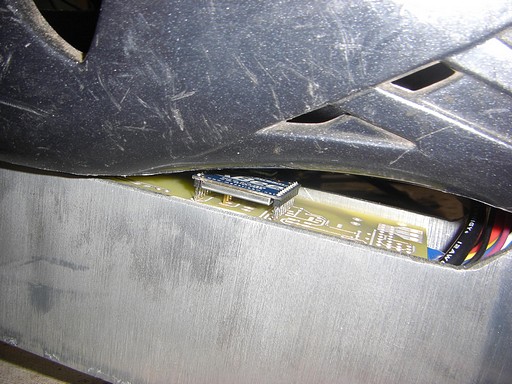 Here’s the consequence of designing in the lithium battery packs and then finding out they only fit in the “tall” configuration. I’ll be practically stepping on the Xbee the way things are turning out – and this isn’t even with the DECs in headers. They will have to be permanently attached to the carrier boards. Only a real fit will tell whether or not I’m truly space constrained.

In the worst case, I’ll make some spacer plates for the boot to be mounted a few millimeters higher.

Meanwhile, as I await the LAST PARTS SHIPMENT!!!!!!!!!, I will de-breadboard the hand controller and mount it to the wristpads. Here’s the fun part for today: 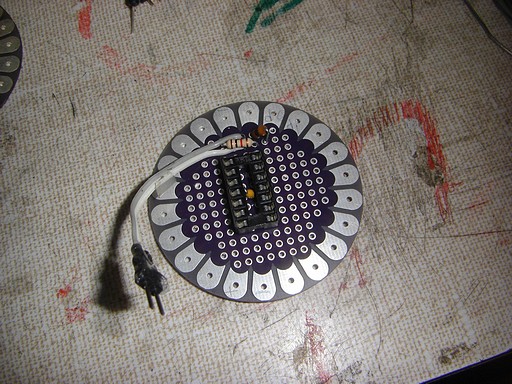 We begin with a Lilypad protoboard.

While I could have used any random-ass protoboard, the Lilypad boards just looked more elegant. Nothing will look in place zip tied to a skating accessory, so it might as well be cute, right?!

On the board I have already mounted a 14 pin socket for my favorite op-amp, the LMC6484.  Additionally, I’ve already set up the resistor divider and a connector to attach the FSR in the glove. 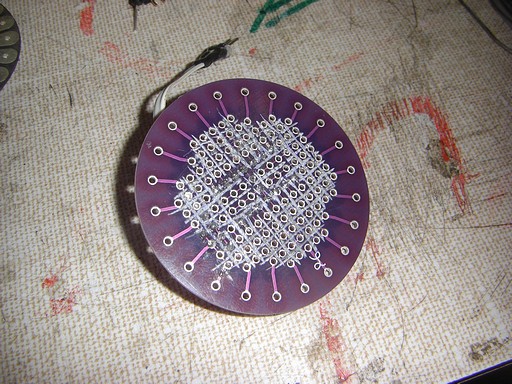 this is where it stopped being cute.

The Lilypads are “anti-perfboards”, which mean all the holes are connected together by a tiny trace which you can selectively cut to create conductive paths.

this is quite possibly the worst idea ever

The problem is that if your circuit is even moderately complicated, it takes forever to remember which little traces you forgot to cut or which traces, Robot Jesus forbid, shouldn’t be cut

After trace-snipping (which is not easy, I assure you, because it essentially involves digging up the fiberglass substrate) the op amp socket and the resistor divider, I had enough.

what the hell i dont even

I took the dullest razor blade we  had and, over the course of half an hour, scraped up every single trace in a grid pattern, leaving me with a normal perfboard and possibly contributing more to developing carpal tunnel syndrome than 3.5 years of build report typing ever did. 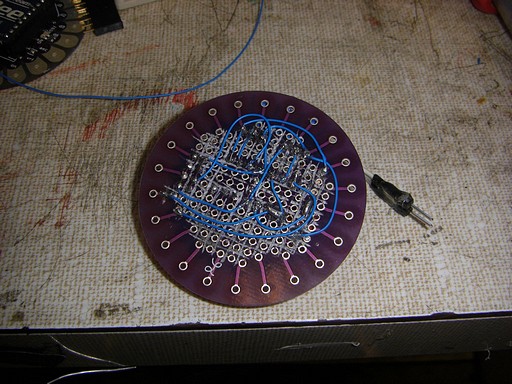 “Rename N-dollar-sign-1 to ground? Of course.”

See, this is how I roll. Cranking the soldering iron to 850 degrees, its maximum, lets the tip melt instantly and cleanly through 30 gauge Kynar insulated wire-wrapping wire (which does not burn or smoke). It makes a quick and clean joint wherever I need it. Borrowing the concept of nets and buses from Eagle, I just connect one wire point-to-point-to-point before cutting off at the end. 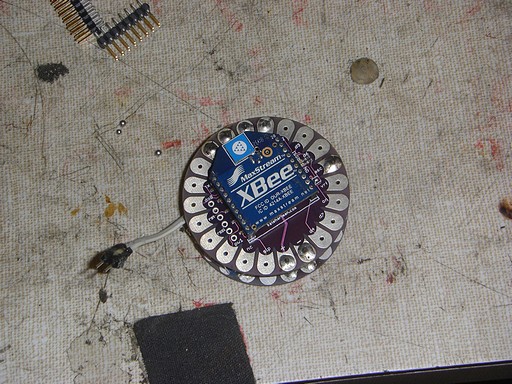 Here’s the part where I have a brilliantly horrible plan and go nuts with it. I cut up a set of wire-wrapping sockets and used the legs as conductive spacers between the XBee Lilypad and the protoboard. The socket legs fit snugly into the Lilypad’s external connection holes.

The XBee’s 3.3 volt, ground, D0, D1, and V+ pads are all soldered to the protoboard’s pads below. One additional pad (“NC”) was secured just for more structure.

The result? A small, adorable Lilypad stack with the XBee on top and the glue circuitry on the bottom. 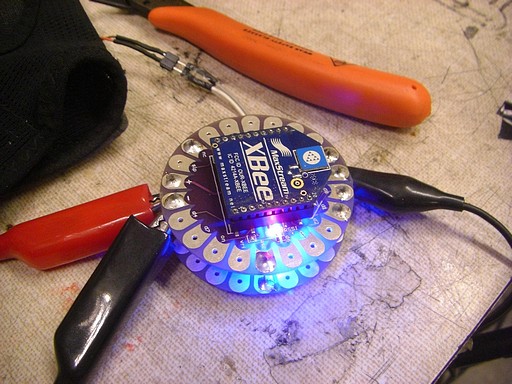 The XBee Lilypad’s onboard 3.3v regulator supplies power to all the logic. 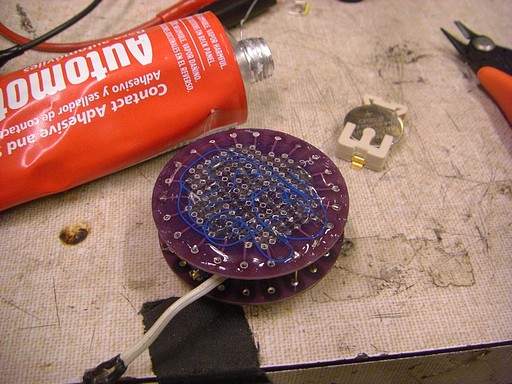 Here’s the 100th build picture of the Deathbldes. Unfortunately not very dramatic. After verifying that the circuit still worked, I drenched the backside in Automotive Goop for insulation.

Goop is one of my most favorite adhesives because it’s rubbery and flexible (yet stiff in thin coverage),  dries and sets fast, and bonds everything. 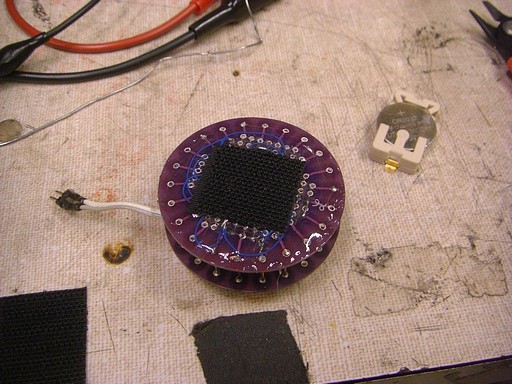 After a few minutes, I remembered that Goop was in fact a glue and, thinking fast, shoved a piece of hook-side Velcro onto the Lilystack.

The entire top side of the wristpad is covered in fuzz-side Velcro, so this facilitates mounting without resorting to something more permanent, like sewing (AAAAAAAAHHHHHHH) 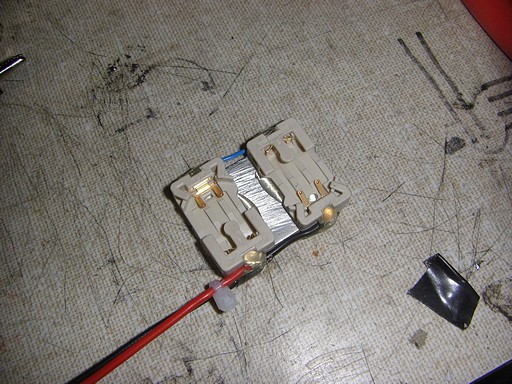 The battery holder got much the same treatment. Two CR2032 lithium coin cell holders are Goop’d onto a small piece of scrap aluminum. Another chunk of Velcro is attached to its back.

The system will run on 6 volts. This is subject to change, since this may be more drop and power dissipation than the very small regulator on the Lilypad can handle. I may change to a single high-capacity lithium polymer cell. 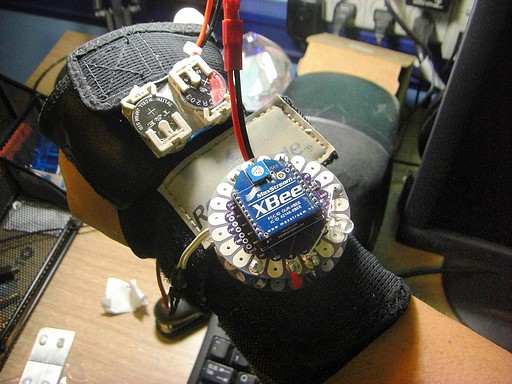 Here’s how the whole thing goes together!

Notice the other LED I’ve added to the top board. It’s connected to the ASC (associate) pin of the Xbee, so it blinks annoyingly and brightly if the XBee is powered and active. 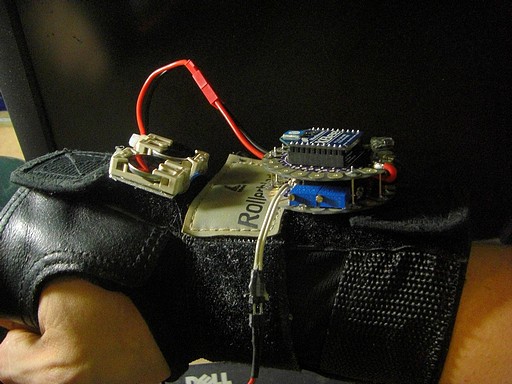 The two trimpots set the force response slope of the FSRs and the “enable threshold”.  It turns out that 25 to 20% is a better threshold than the 30% tested previously. I highly doubt the skatemotors will even produce enough torque to matter at 25% throttle anyway. 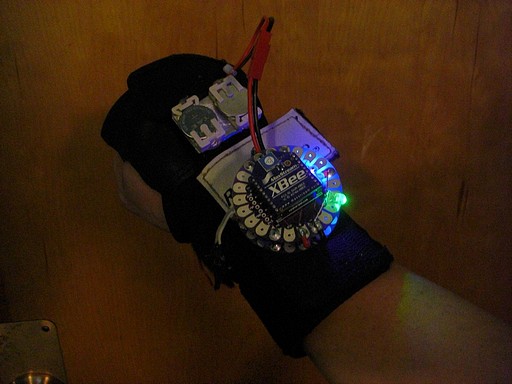 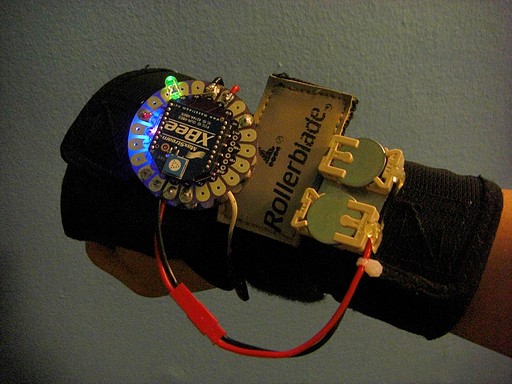 Trying out a different configuration now. This is where having a huge Velcro surface comes in handy. 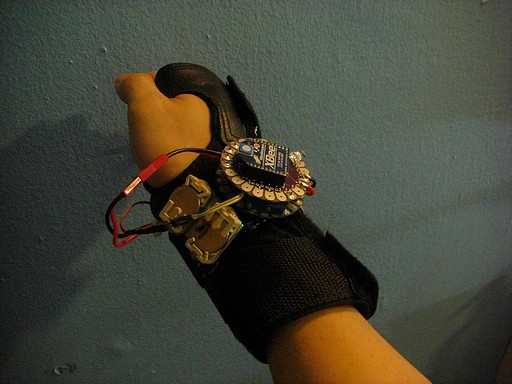 I’m very satisfied with how Skatroller turned out. The only problem turned out to indeed be power consumption. The two bright LEDs run straight off 3.3 volts, along with the XBee’s relatively strong hunger for power, meant the poor CR2032s went flat within 10 minutes.

So expect the ASC light (at the minimum) to come off and the blue power light to get a resistor. Additionally, I’ll probably take myself up on the single cell lipo challenge. Three AA cells at 4.5 volts would make a good high capacity power source, but that’s extremely bulky.

digikey where are you