First off, I would like to thank Adafruit Industries for graciously donating a small flock of XBee radios and breakout boards. I can now start an XBee farm and isolate true-breeding strains of particular mutations.

Go buy stuff from them because they’re awesome!!

Over the past roughly 2 days, I blitzed through the Double DEC’er boards and put both units together (with the left side still without magnets, so it just freewheels). I’m proud to say that I have successfully test piloted the ‘blades and am not currently suffering from severe cranial trauma. They’re actually quite tame, but there is plenty of room to tune and refine. 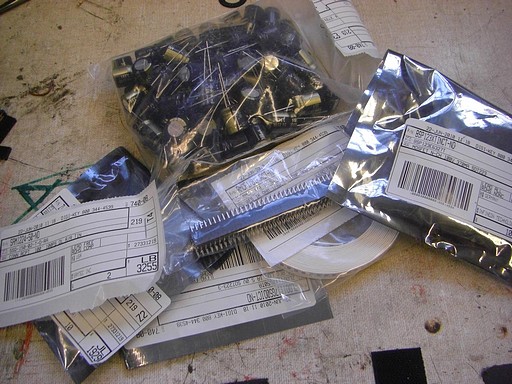 I got all the special and SMT parts I needed from Digikey in massive quantities because the rest of MITERS could also use them. This build would also be my first foray into using surface mount parts of any type. Before now, I couldn’t see SMT parts out of principle, but I think my vision is slowly getting sharper. 1206 components now register as one pixel. 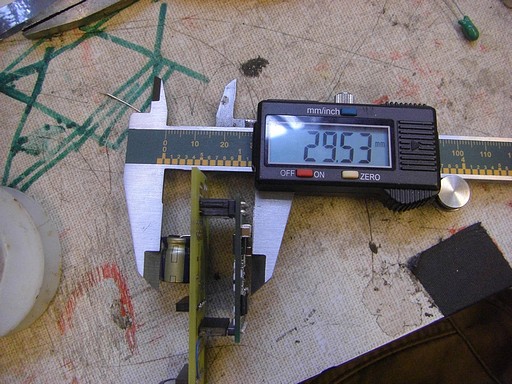 A preliminary height check using only the tallest components shows that the board would need significant compactification in the vertical dimension if I was going to actually fit them into the frames.

I briefly considered soldering the DECs directly to the boards, but elected to go ahead and make one board that had every expensive component (read: XBee and DECs) be removable and see if I could make that fit. If the tallest board does, then any other possible layout would also fit. 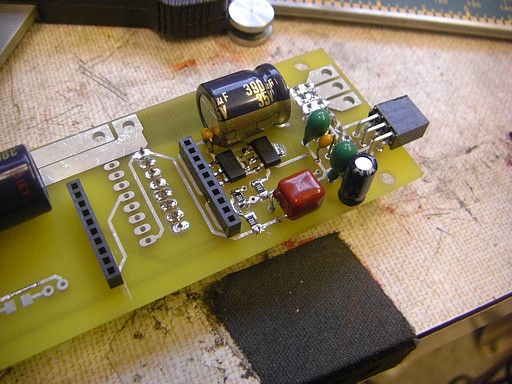 It wasn’t that bad at all, actually. At least not with SOT223s and 1206 packages, which, for surface mount, are comparatively huge. A very, very clean soldering iron tip helps immensely. Up until this point, I was used to flying with completely grunged tips. 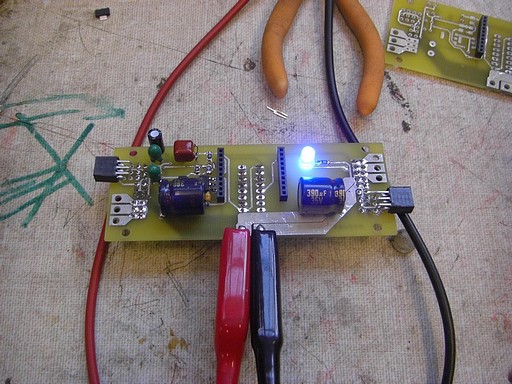 All the discrete components are loaded and the board passes its power-on check! 5 volts and 3.3 volts all appear at the correct places.

I noticed the 5 volt regulator heating up quickly when an Xbee was loaded into its socket. This is due to it having to drop 24 volts (or thereabouts) to 5, all while flowing 50 to 60 milliamps. The 5v linear regulator itself was a last minute addendum to the schematic because I thought the DECs’ onboard 5 volt supplies (rated at a paltry 35 milliamps each) could not hold up the XBee and the motor sensors alone. 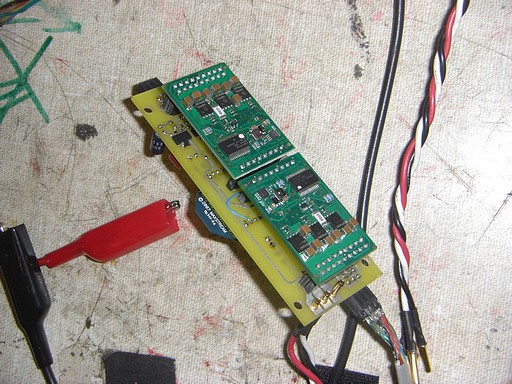 However, with both DECs in, it appears to be fine. Anyone know what the hell actually happens when you have 2 switching and one linear regulator all paralleled?!

Here’s the hookup for a bench test with one motor. In a serendipitous discovery, the 2.3mm male bullet connectors slip right into the motor phase output connections for convenient testing. 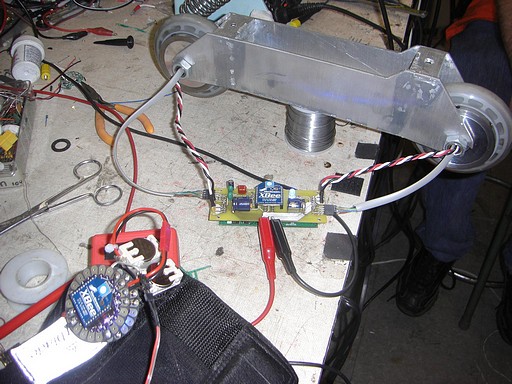 Here’s the test video of what essentially amounts to a full Deathblade power unit, just strewn out on the table. I moved over to a location with a bigger power supply for this test because the MITERSupply was current limiting too hard, but I lacked the confidence to throw it on the full 6S lithium pack. 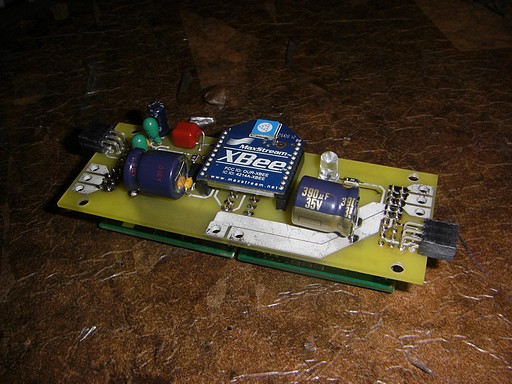 A closer view of a finished Double DEC’er board. 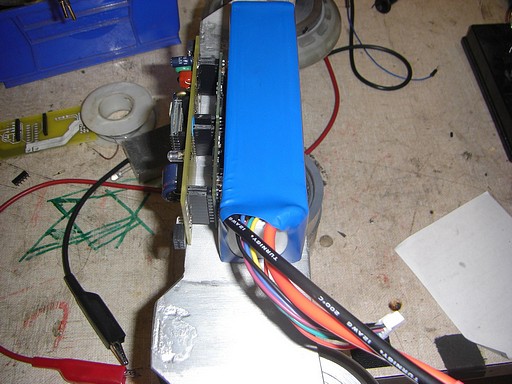 Alright, so here are the problems. The board in the “100% reversibly assembled” configuration doesn’t actually fit within the confines of the skate frame if the battery pack lies vertically. Additionally, the battery turned out to be several millimeters wider than its specification, which meant that it could not lie horizontally without either modification or severe machining of the frames.

The root problem, of course, was the battery. I ended up taking both ways out. 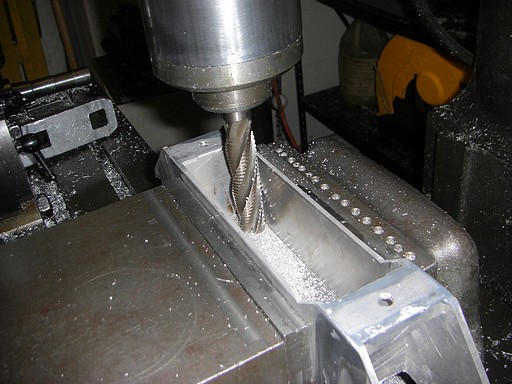 Using my longest 3/4″ roughing endmill, I thinned down the walls of each frame about 1 millimeter each. This operation turned out to be painless because of the ridged cutter surface (one of the advantages of roughing mills). I had otherwise expected such a long depth to chatter uncontrollably. 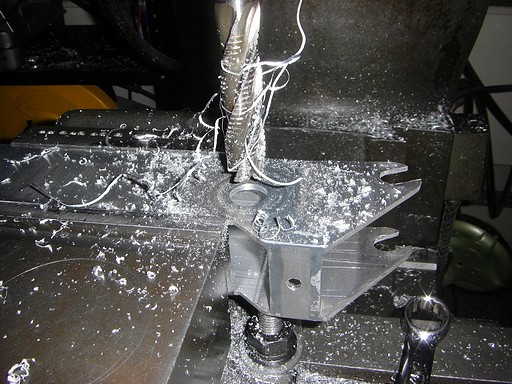 As long as I had Lady Bridgeport warmed up, I bored a power switch hole in the side of each frame. While I normally just disconnect the battery for most of my creations (even RazEr), I thought it would be more slick to have an Epic Switch on these. 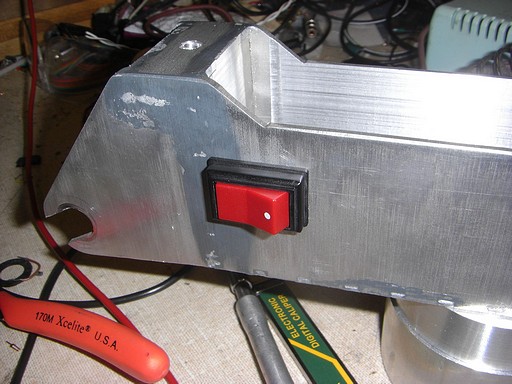 The aforementioned Epic Switch. I found two of these haunting the Media Lab, and they were the only square switches I located which did not also require a square hole (harder to drill, you know).

I wouldn’t have minded (mound?) a round switch, but couldn’t locate two matching ones. 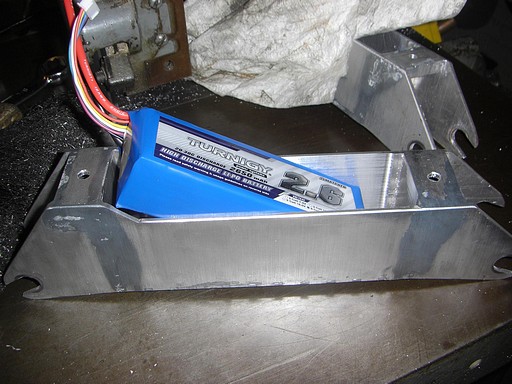 Hey, the battery now fits in!

Kind of. The main power leads exit out the side of the back, and they are very securely soldered… 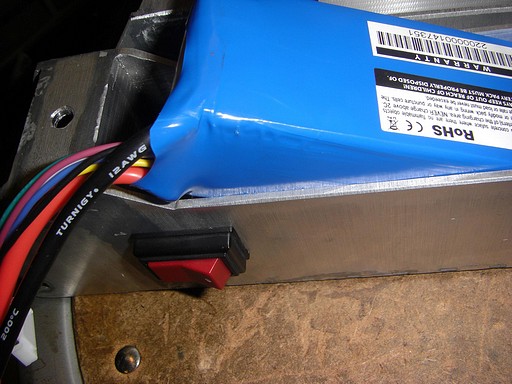 To accommodate these, I’d have to slot out a section of the frame. This would horribly compromise the structural integrity, unfortunately.

So this calls for step 2: the EE way. I’ve moved wires on batteries before, so I didn’t hesitate to rip apart the pack to investigate that possibility here. 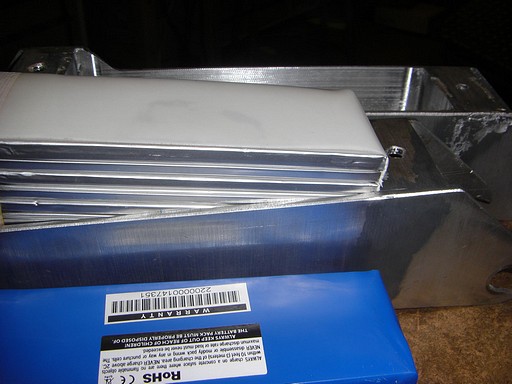 For what it’s worth, once the shrinkwrap comes off (it’s thin and nonstructural), the batter actually fits completely into the back of the slot where the endmill couldn’t reach.

Hey Hobbyking, do I still have a warranty on this thing since I didn’t violate the sticker? :> 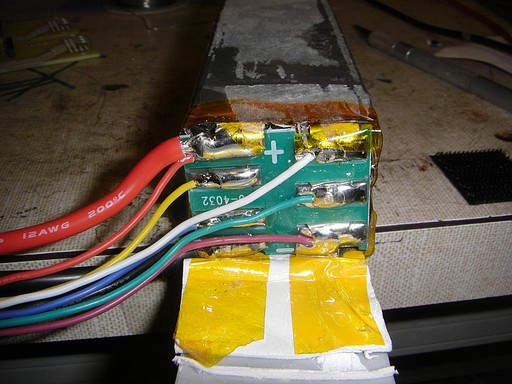 Tearing deeper into the pack (yup, warranty is definitely gone…) reveals the power and balancer connections. The packs are very well made and all connections are on PCBs. Many early lithium polymer packs had direct-soldered leads. 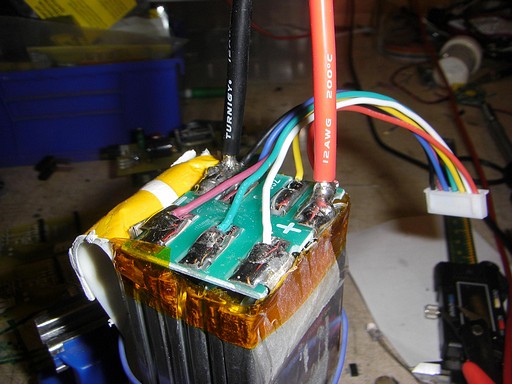 Well, that was simple. A giant soldering iron and some leaded solder later, the wires point into another axis.

Of course, these two joints are now metallurgically indeterminate. The packs are made with non-leaded solder, but Lead-Free is for Losers™… and I only had normal solder anyway, so some of it got mixed into the glob.

I wouldn’t send it into space, but for now, I think it’s fine… 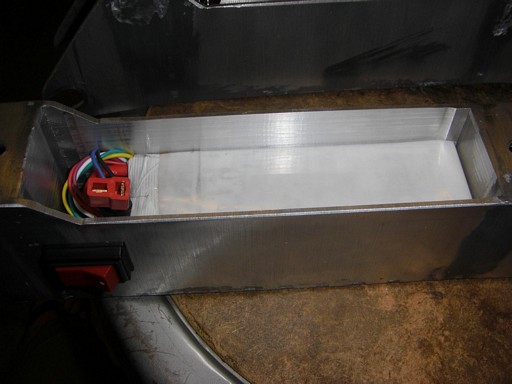 While I had the soldering iron heated and the battery’s wire leads detached, I changed the XT60 bullet connectors to some Deans connectors in order to standardize my battery packs. Who knows – eventually, they might be part of a Super Deansbus. 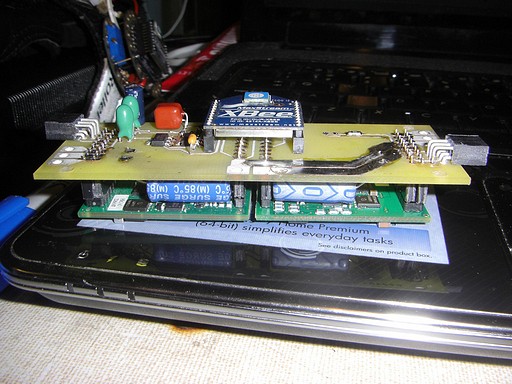 A spur of the moment rummage through one of our many capacitor bins unearthed some 470uF, 50 volt capacitors that were narrower in diameter than the buscaps I ordered. In fact, they fit exactly into the dead space that the DEC modules overhang!

The response was obvious. I knocked about 3mm of height off the board and gained some capacitance! 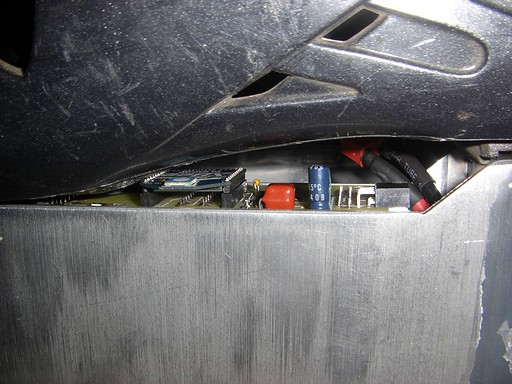 After all the modifications, I’m still almost stepping on the XBee. There’s maybe 2 or 3mm of normal distance between its edge and the nearest boot surface.

I’m not concerned, however. Even if I weigh enough to deform the boot, the whole Double DEC’er board is mounted on double sided, cushy foam tape, good for another millimeter. 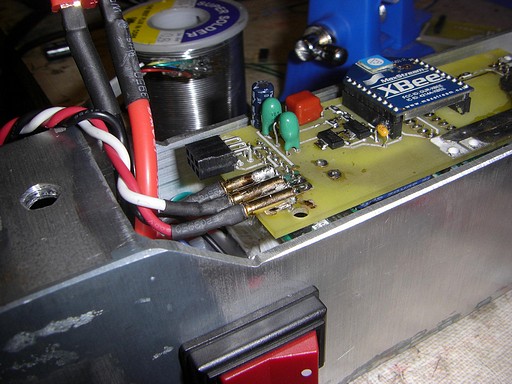 I discovered that the mating bullet connectors solder very well to the original output connection pads. So, side-bullets it is. It saves even more vertical space, but I still think a short section of wire pigtail with these on the end would have been better. The bullet connectors require alot of “engagement length”, which was difficult to provide in the space behind the battery. 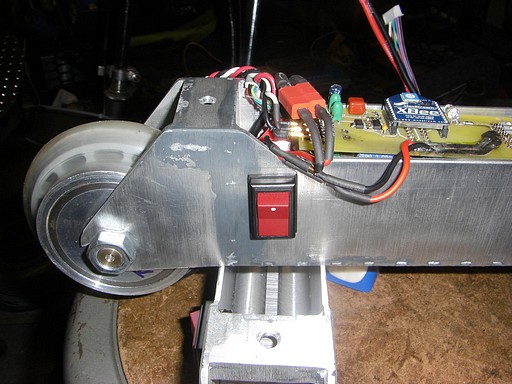 The Epic Switch was rotated to a vertical orientation for better wire exit points. I’ve also added connectors to the DEC’er boards themselves so they may be readily removed. 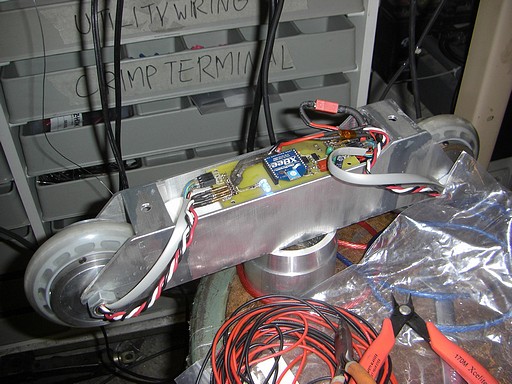 And the other motor is mounted…

I had a bit of fun determining the proper orientation of the motor vs. its rotational direction vs. the configuration of its 3 phase inputs, which took about half an hour of guess-check-forget-and-guess-again.  Then I dropped the boot on for good. With Loctite! 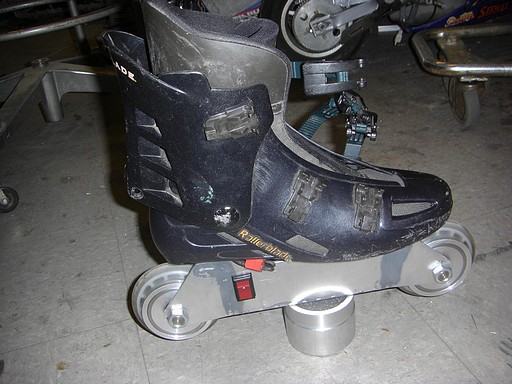 This is it. This is Deathblade-R, fully completed. No more mods are necessary, nor parts missing. If I wanted to, I could one-leg-skate my way around. Except I don’t actually know how to do that, so I’ll save the potential for broken limbs and knocked out teeth.

I’m going to go ahead and put together Deathblade-L anyway, but the motors do not yet have their magnets. The order’s been placed, but it could be three weeks (!) or more before they arrive. 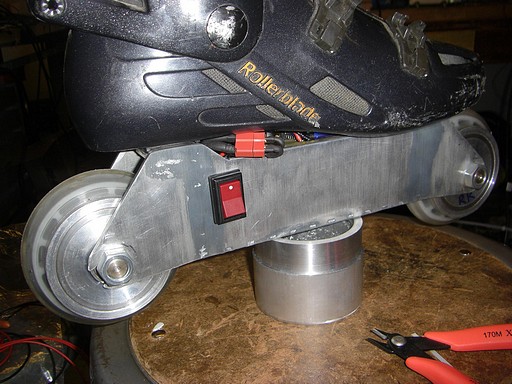 The battery connector hangs out the side for easy access when I need to charge them up. I could have taken it one more step and put together a charging port, but I felt that was superfluous for the first revision.

By this time, the garbage trucks were rolling in to empty the dumpsters and facilities personnel were poking their heads in the door wondering who the hell was up this early, so I put Deathblade-R on the charger and called it a night…

This is currently the frontrunning “official” name for the project. Why? Because it uses the same tech from RazEr, the hub motor scooter, in convenient inline skate form.  It’s been hanging out on the list of possible names for a while, but one other party independently concluded that it was a good name.

So, expect the Project page to be updated soon with the latest!

One thought on “Deathblades: Race to the Finish, Part 1”