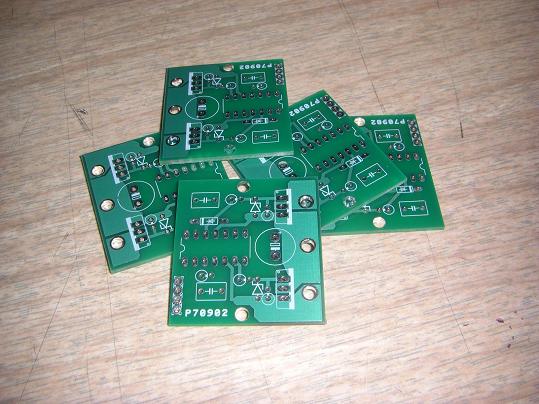 SMALL CUTE HALF BRIDGE BOARDS! They’re so clean… so shiny… so detailed… so…

I ordered 4 (+1 free) from Advanced Circuits shortly after posting about them. Over the course of 2 weeks, I got no less than 1 postcard, 1 thick envelope (which I thought contained my boards) full of brochures, a round PCB drink coaster, and three sales representative calls asking me how I’m doing and whether or not I had any order questions.

And with the boards, I got a little packet of free microwave popcorn.

Advanced Circuits is like a grandmother or gift-pushy uncle. I’d actually appreciate it if they laid off the customer appreciation and just got me my damned boards faster. That means more than any random token ever will.

Anyways, 5 is enough for one split-pi converter and 1 3 phase motor driver bridge. So there may be some more minor power conversion experiments in the future.

While waiting for the boards and the WHERE THE FUCK ARE MY BATTERIES, STILL? for Deathblades, I decided to make a second iteration of the “Double DECer” board.

Shortly after finishing the previous iteration and  debating myself over component placement and available volume, I discovered there was really no problem at all.

In designing the most recent drawing of the ‘blades, I mistakenly constrained the top of the battery pack to be 5 millimeters under the edge of the aluminum sides. When I changed the battery pack spec, I only changed the part dimensions and not that constraint. In reality, then, what seemed like only 5 millimeters of space was actually 23mm. I thought it was a little weird to have a 31mm tall battery fill up a 54mm cavity almost to the brim.

I then remembered that PCBs can have two sides, which was instrumental in creating the new layout. If I put the Xbee and DECs on opposite sides of the board, then they won’t conflict with eachother volumewise!

The new layout reflects this. On the “top side” sit the Xbee, glue circuitry, bus capacitors, and I/O connections. The DECs, now turned to face eachother, occupy space on the board’s bottom, and the “overhang” they provide is used to park the 3.3v regulator. All the control pins are right there and there’s no more cross-board running of signals.

I was even able to add some real mounting holes. The outer dimensions are within Eaglol’s 4 inch X-limit, and the board is 1.5″ wide.

This is a board that is actually worth sending out now.