In the interest of having a static display Deathblade on Thursday, I’ve been pushing up the timeline on parts work which was originally going to wait for summer. The frame pieces have been cut out, but I will only assemble 1 for now. The motor cores will not be wound for the presentation. Now that I finally received my delayed (at no fault to them!) McMaster shipment, I can make the motors’ center shafts.

That’s about it, actually. I also need to think of a wittier and less fear-inducing name than Deathblade. Let’s play the Name Charles’ Latest Stupid Vehicle Project game! I’m thinking it should stick to the $SINGLE_SYLLABLE + “Blades” theme.

Failblades? Motorblades? E-blades? Z-blades? Cheeseblades? Another suggestion I received was “EDM”, for both electrical discharge machining and “Electric Death Machine” which, while it appeals to my affinity for puns, still has the word death in it which I would like to…err, avoid. 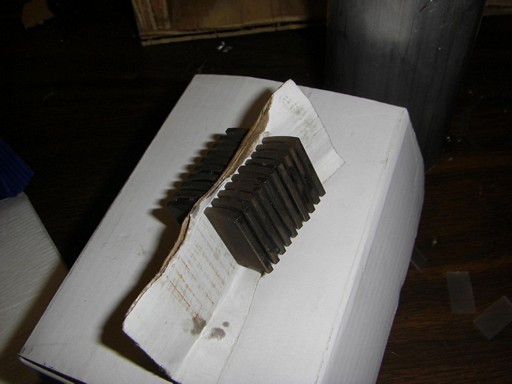 We have motor magnets! I ordered these from my all-time favorite source of super magnets, Mr. Supermagnetgeorge back in early March some time when I decided to go ahead with the Deathblades project more seriously. They are custom-ground arc segments, 14 to a circle.  I elected to go with the strongest grade available in order to maximize torque. I might find it useful later on to switch to a high temperature grade for better magnetic field retention at healthy motor temperatures of 40-50 degrees Celsius. 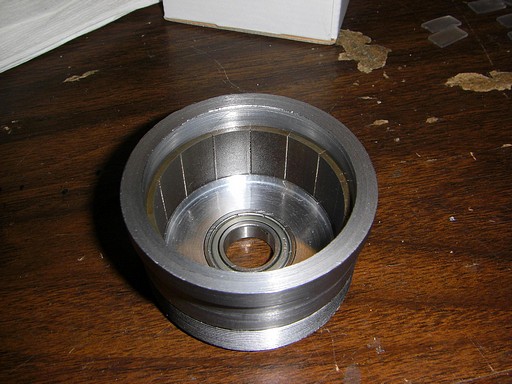 Into the cans they go. I used some generic 2 part, 24-hour laminating epoxy that we happened to have a gallon of. The installation process was easy due to the fact that the magnets complete a circle.

I found that the magnet-making process is essentially dead on, dimension-wise. I keep overboring my can internal diameters because I possess fears that magnet #14 will barely not fit (lastmagnetdoesntfitophobia), but it seems like their manufacturing tolerances are tighter than what I can hold on the Old Mercedes.

After shoving in the magnets on both motors, I left the cans to cure under a desk lamp. The elevated temperatures allow the epoxy to set quicker and stronger. 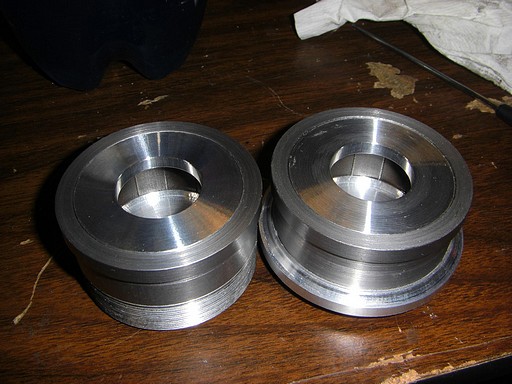 Now that I know how far the magnets actually stick up, I could make the removable endcaps. They’re structurally the same as the permanent endcaps, just a few thousandths of an inch smaller in diameter. 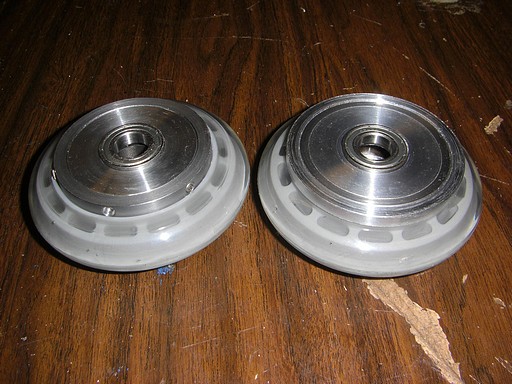 After making the endcaps, I put the radial screw holes into both components.

Astute motor builders will probably wonder why I drilled and machined the steel endcap after I installed the permanent magnets. I did that because I’m an idiot and it was late at night.

Yeah. Make sure your motor cans are done before gluing the magnets, unless you like picking every last tiny chip of steel out of the can internals. 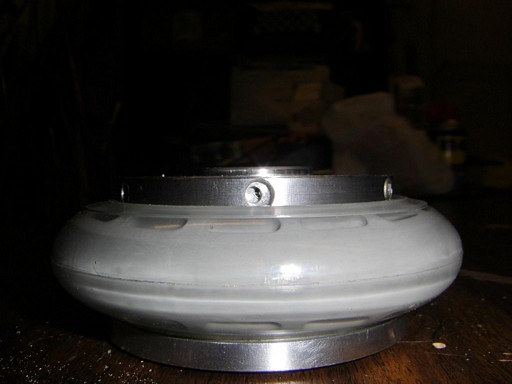 Yeah, um… about that “late at night” business.

It looks like I over-indexed by one peghole on my small adorable dividing head and didn’t notice. Actually, I don’t even know what on earth happened here. That’s two different directions of “slightly off”.

Oh well, at least the rest seem to be okay. 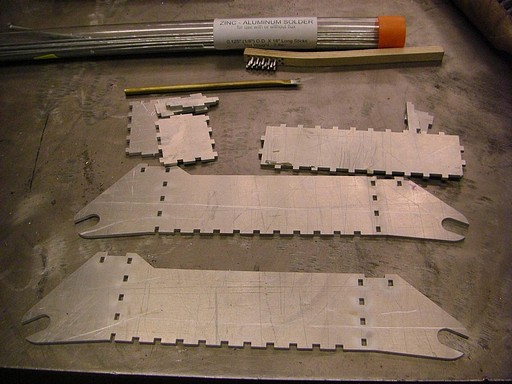 Moving on now to the skate wheel frame. Remember the rendering? Well, here it is, in 1/8″ aluminum form. The waterjet still stands as my most favorite machine tool ever, right next to bacon bit dryers.

Also in the picture is my weapon of choice for putting together the wheel frames. Now that I have had practice on Cold Arbor, zinc-aluminum brazing is one of my preferred methods of putting together thin(ish) aluminum structures when t-nuts are not optimal.

To zab something, you need a

Also, a set of heat-resistant gloves are nice. No, I couldn’t dodge the torch exhaust when building Arbor, no matter how hard I tried. 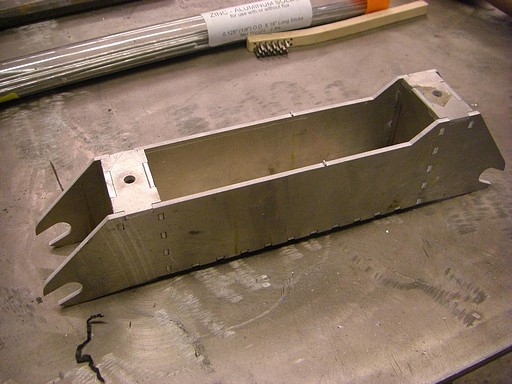 First, I hit all the parts with the belt sander in order to remove the waterjet’s characteristic features such as edge draft (minimal in 1/8″) and underside burrs. I also reduce the size of each tab slightly so it can fit into its appointed slot with only a small amount of beating and forcing.

I put center punch dots on a few slot-tab interfaces to keep the assembly together while it undergoes the joining operation. 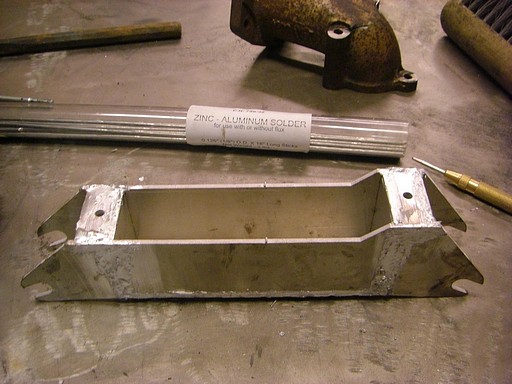 Next is the globbing phase. This is where I heat each joint area to the point where it keeps a pool of solder alloy molten, then brush it thoroughly into the metal. All over the place. Vigorously. Enough to actually start scraping up and eroding the aluminum alloy underneath. I’m fairly certain this is actually desirable, since it mixes the solder into the parent metal and the whole things then solidifies as one piece.

As its name entails, the process leaves huge alloy blobs everywhere, which have to be cleaned up on the belt sander. 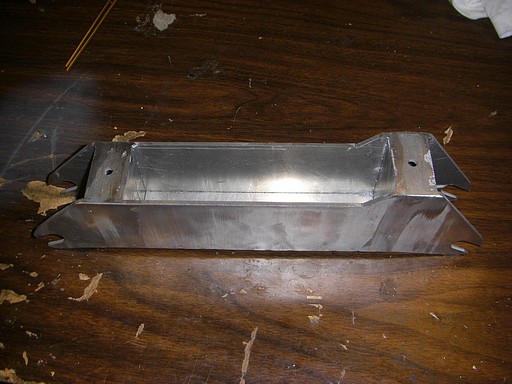 The results after a while of 120 grit assault.

I would have much preferred 60 or even coarser grades, since they remove the globs quickly, but we didn’t have a single coarse belt left. Time to place yet another McMaster order.

These results are great for me only having the patience to do the outer edges (that and the brush I made this time wasn’t long enough!). For extra strength, I should really fillet the “bucket” inside edges. 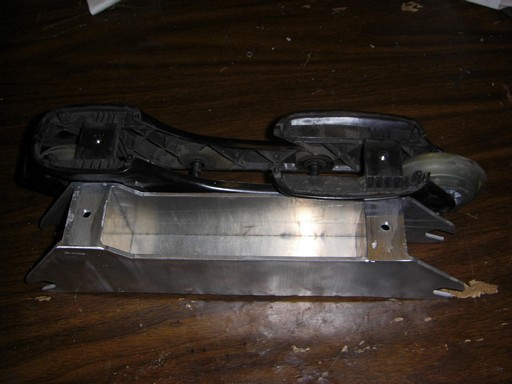 Here’s the eventual wheelmotor frame next to the original skate wheel frame. I kept the wheelbase identical in order to keep the handling characteristics the same. 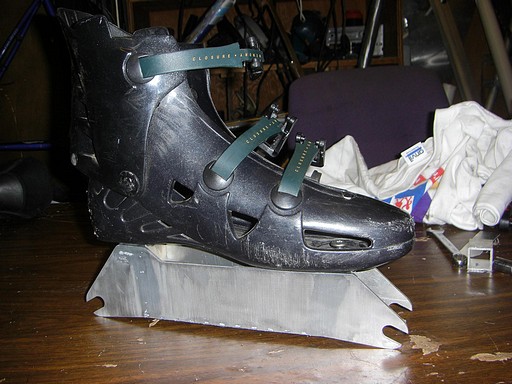 … no, not really. I parked the original skate boot on top just to check if I got the mounting dimensions correct. And correct they are! 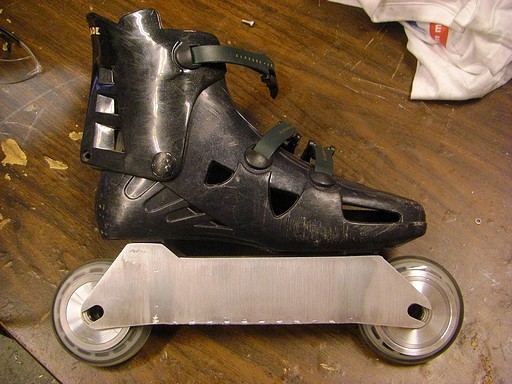 Clearly, the motors have no center shafts. This will be taken care of soon, hopefully today.  After that’s done, this *blade can stand on its own.

Well, not really. I’ll make a snazzy display stand for it or something.

6 thoughts on “Deathblades: The Framework”