In the spirit of eventually working towards running in-house developed equipment on all of my vehicles , I decided to man up and finally pitch Tinytroller at the final boss fight of scooter controllers: controlling the Turnigy C80/100 “melon” motor that runs melon-scooter.

Melon-scooter has been out of service for about a week and a half – the chopped Jasontroller worked extremely well until I let it out of my sight one Friday night at MITERS when a bunch of freshmen and new members were in attendance. When I attempted to leave later, I found that the motor was shorted through the controller and there was no response from it when powered on. And of course the froshlings had all quietly left by then, with nobody telling me that my scooter was behaving a little strangely and not like… going and stuff.

Anyways, I’ve found derpybike to be quite useful in the mean time. Since the failure was totally not under my control, I can’t quite tell what went wrong. When I opened the case of that controller, nothing appeared to be burnt or detonated, but some FETs are most definitely shorted through and the drive circuitry is dead. I’ll probably just order up another Jasontroller (or use one of those 500W bricks?). 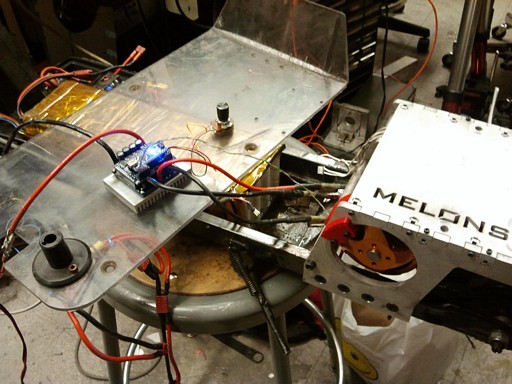 The C80-100 is a pretty formidable control challenge for a homebrew motor driver because it has both very low resistance and very low inductance. I measured the line to line resistance to be around 20 milliohms – meaning any little twitch or fuckup by Tinytroller can send pulses of hundreds of amps through the system. The low inductance means the current through the stator cannot be modeled as approximately constant, especially at my relatively low (8khz) PWM frequency, wreaking havoc with non-robust current controllers. It’s built similarly to many other huge electric flight motors, so if I can control the Melon, I can probably take on other scarier airplane motors too.

Melon-scooter normally runs sensorless since I originally built it with a Hobbyking 100A airplane ESC, then subsequently a sensorless Jasontroller. To use it with Tinytroller (which is not yet sensorless), I had to append sensors in a similar fashion to Straight RazEr. It’s that red thing by the motor: 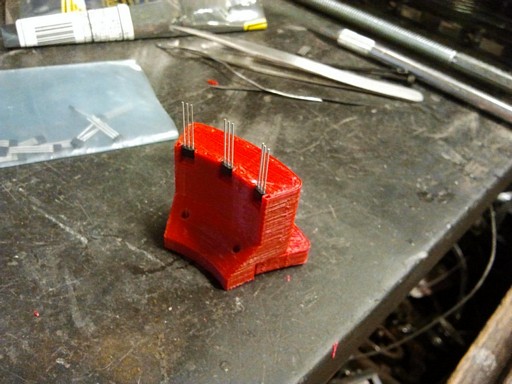 I bodged together Make-a-Bot’s heater one more time (last time, I swear!) and used the last 2 feet of my 3mm ABS filament to make this sensor mount. Unlike Straight RazEr’s mount, this is a two-piece since I needed to fit it into the very close gap between the motor and my frame. 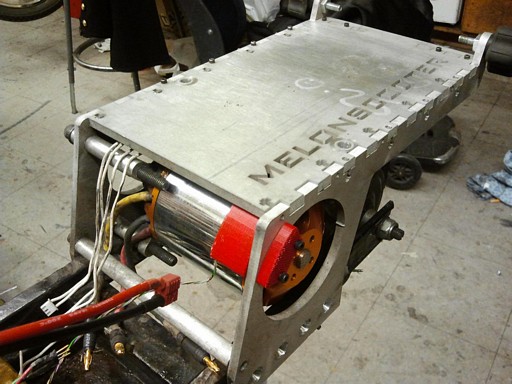 Like so. Unfortunately I made this one a little too close – the ABS plastic actually rubs alot on the motor. It doesn’t seem to be affecting sensor operation, but it just makes an ugly scratchy sound. Oh well – it will have to do for now.

The first test was performed on 24 volts so I could (more) safely full throttle the motor in order to time the sensors properly. For a while, I was trying to find the absolute minimum point of phase current draw at no load, full speed, which corresponded to the point of optimal sensor timing. Wandering even a little outside this region caused the current to increase very quickly, some times up to 40+ amps no load… that’s 1000 watts dumping into the motor just spinning while sitting there. However, Tinytroller handled the mis-timed excessive current draw just fine – no fiery death like I expected.

I was able to get the motor current down to 7.5-8 amps no load, where it has generally been. 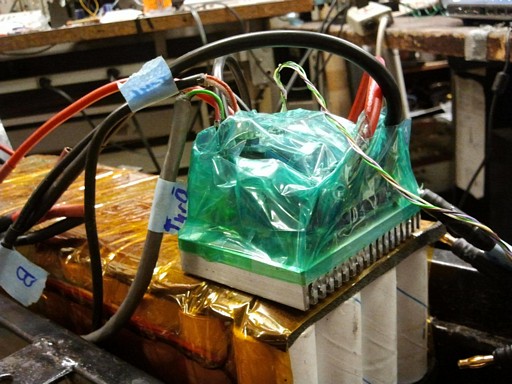 I did still have plenty of PLA plastic left, and I was going to print out a Nice Case for Tinytroller that enveloped the whole thing and had custom wire entrance and exit holes and whatnot, but decided PET film tape was enough for now. I made a little greenhouse (literally?) for Tinytroller which should keep most of the gunk out of it.

Plus, I figured it was going to explode anyway, so why waste time on a nice case? 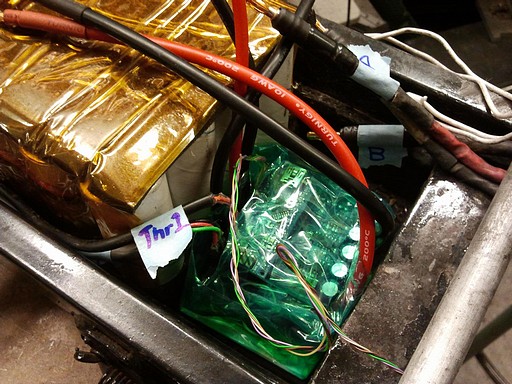 All bundled up and connected.

I tried something a little different with this attempt at running melon-scooter. While Straight RazEr’s control scheme relied on a single throttle, with the bottom (released position) being a slight brake (negative current), neutral coast somewhere in the middle, and the top being full driving current, I put a handlebar throttle next to the thumb throttle on melon scooter and had Tinytroller read both. 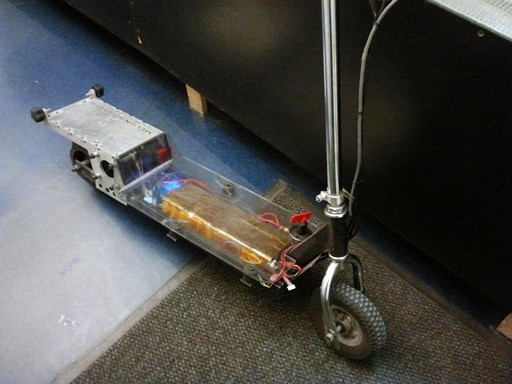 After making sure it did indeed survive a no-load spin on the 12S battery pack, I threw the deck back on and went for a test ride. If it was going to explode, it might as well do it while the motor is running full bore on 40 volts. The no-load speed was measured to be 4330 RPM, a fair amount slower than even the Jasontroller’s 4700 RPMs. It could be attributed to sensored control with the sensors at the point of zero timing advance (sensorless will always tend to be faster) or it could be my battery being low after not being charged for a week.

The low speed terrible sound was still present – and boy was it ever noticeable on the melon. The “terrible sound” is a feature that has been with Tinytroller ever since I added the timer interrupt routine. It can be clearly heard as a clacking sound at very low speeds in the etek test video. I’m completely unsure as to where it comes from, and I can shift the Band of Terrible Sound up and down in the PWM output range if I add various length delays to the interrupt service routine & state changer. This just tells me my timers (1 and 2 on the ATmega) must be running into eachtoher somehow.

Regardless, Terrible Sound mode results in very high current draw for the duration of that “band”, and with the massive windings and rotor of the melon, it was felt as a very strong rumble or high frequency ripple torque. I can’t imagine it being too good for Tinytroller. As soon as the band of terrible sound is passed, the ride instant becomes smoother and more controllable, but transitioning back into the band results in the motor suddenly slowing and becoming rough. Considering that the Band of Terrible Sound occurs at a useful low cruising speed of about 4-5 mph, this is indeed quite a problem. I might have to dig deeper into the ATmega manual to find out what timer registers are being refreshed or reset when I dont’ expect them to be.

Melon-scooter managed to make it 90% of the way around the block before it suddenly flaked and shut off. I was able to cycle power and have it function again, but only for a very short while. After which it seemed that at least two low-side FETs were shorted, since the motor was reluctant to turn even with the power off.

Before that, during bench testing, I had noticed my big red key switch becoming flaky and occasionally shutting off or dithering on and off, power-cycling the controller many times. It very well could have been a flaky switch that shut off from vibration, and the sudden power kill would result in huge negative voltage spikes which could have destroyed components.

I’d hate to think that the only thing that took down Tinytroller this time was a flaky power switch, but the performance was fairly smooth and flawless once the Band of Terrible Sound was passed. Slowing down was difficult – re-entering the Band of Terrible Sound meant I  had to hold on to prevent the handlebar from punching me in the stomach as the motor suddenly acted like I had jammed a rock into it. Getting something reliably working is, in my opinion, 90% of the challenge of actually making a useful product or project, so I’ll just continue the Tragedy of the Tinytroller some time.

I’ve also been sketching out some more designs for the Next 3D Printer. Adding a filament guide to the interior of the machine that had to be flexible enough to reach the far corners of the axes while folding up neatly and predictably has been a fun engineering exercise, and I now understand why commercial 3d plastic extrusion printers are so damn huge. I need alot of buffer space to run the set of wire and cable guides which hold the filament and the electric umbilical.

However, one thing I did decide on and finish designing was my new Z axis. In the first post about the new machine, I sketched out an idea for a combined chamber heater and build surface heater. Well, that idea has since been turned into Solidworks. 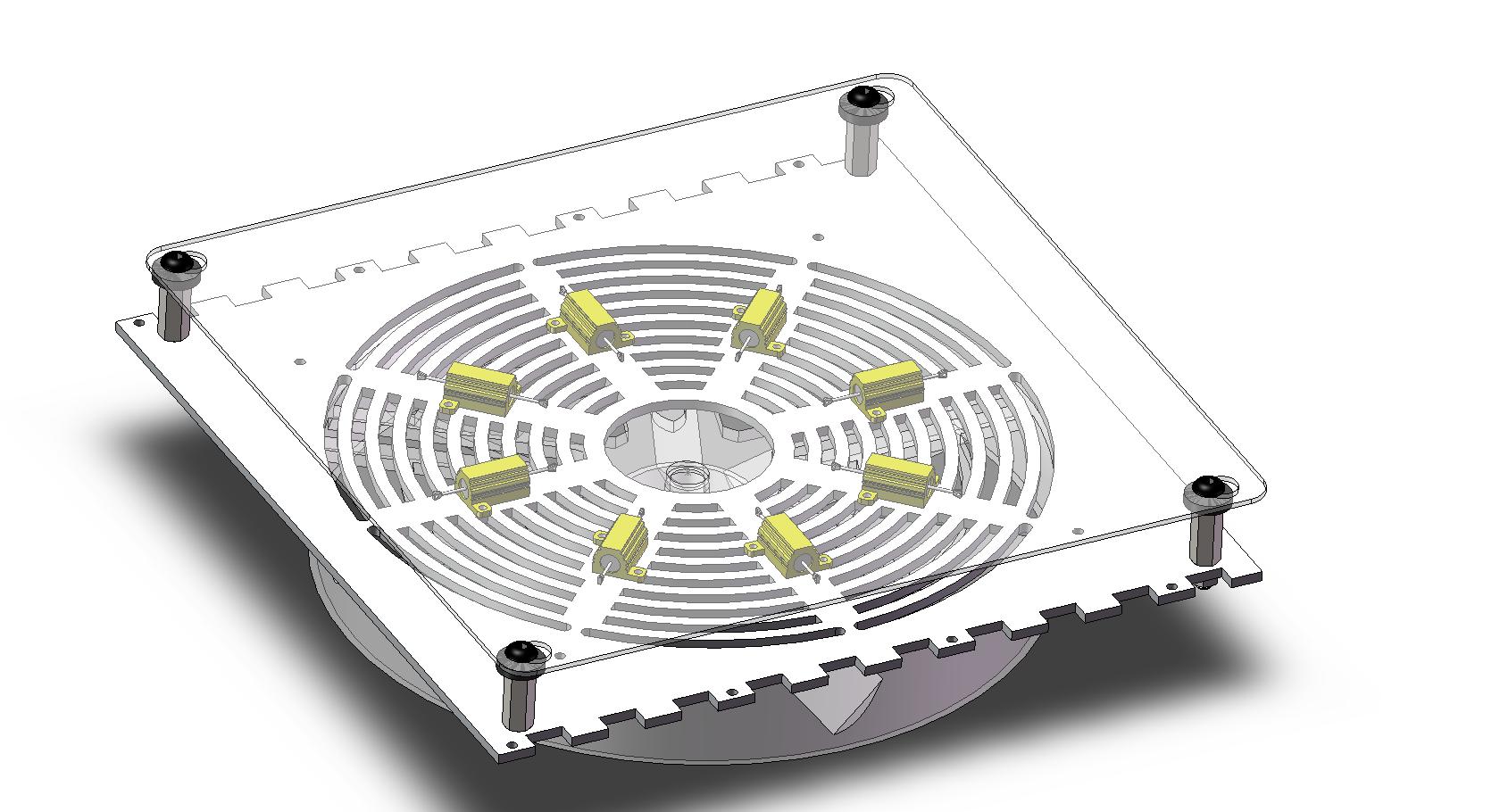 Hey, it’s like the exact same thing. The resistors are 10 watt types, currently spec’d to be 0.22 ohms each and to be run in series for a roughly 1.8 ohm string, which ought to net me about a hot 80 watts of heating power. The surface itself was made transparent for imaging purposes, and actually is supposed to be aluminum and not clear plastic or something.

I’m not a thermal systems engineer, so I just whipped up a radiator pattern for the resistors that kind of made sense in my head. 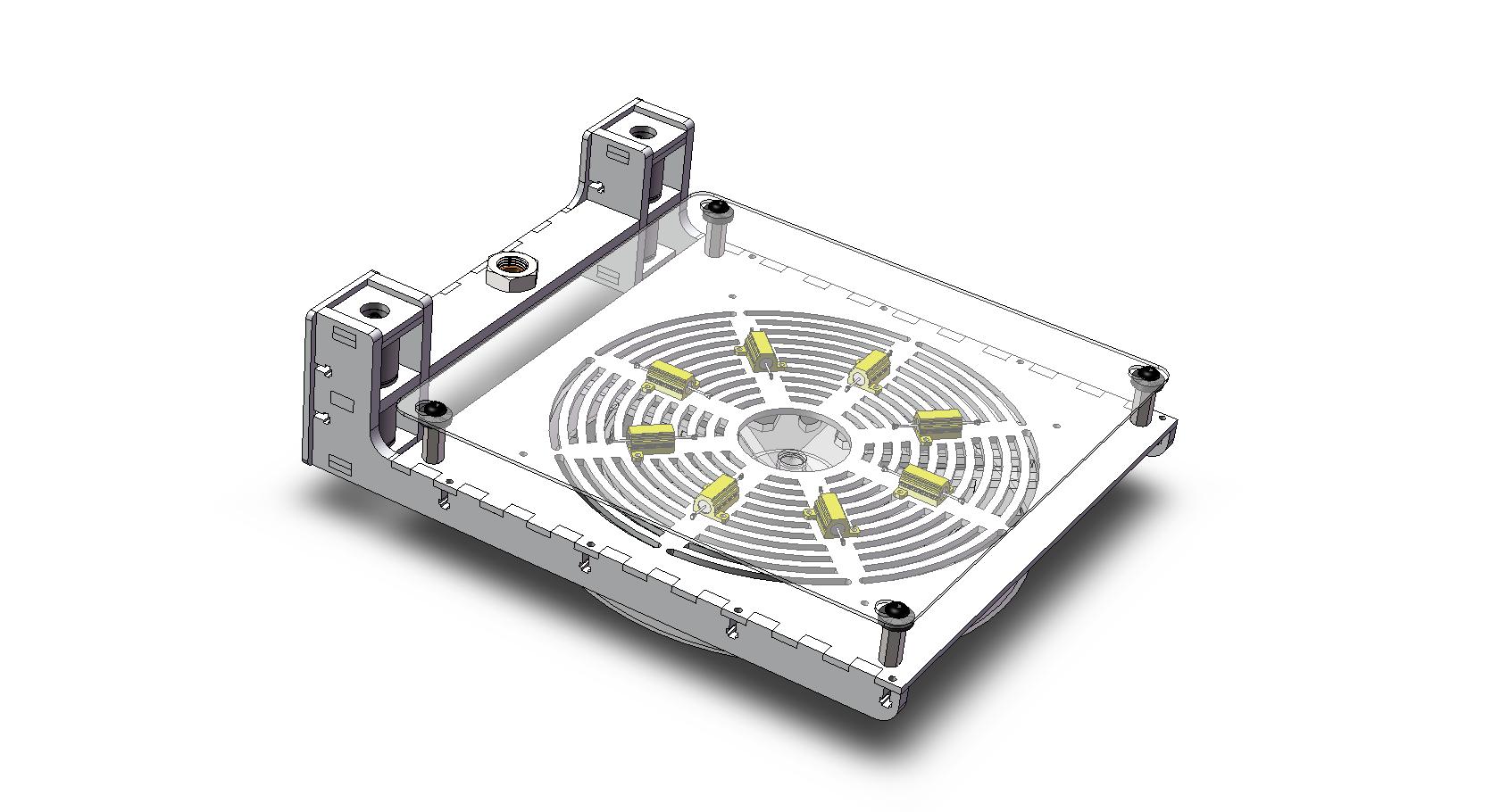 Some more design progress on the Z table. The parts here are “edge stitched” together in my usual style with tabs, slots, and interspersed t-nuts. Four LME12UU type linear bearings comprise the guide system, two on each side, held apart by spring washers. I’m reusing the central leadscrew nut from MaB because for some reason it cost $30 and I still have 5 more feet of the same leadscrew, and I’m not buying a whole new one. The structure is mostly 1/4″ aluminum beams and 1/8″ bracing plates – I’m trying to minimize the use of giant 1/4″ stock on this machine, but because the Z table is so big (250mm square build plate, with a total length of about 290mm front to back!) it was warranted here. 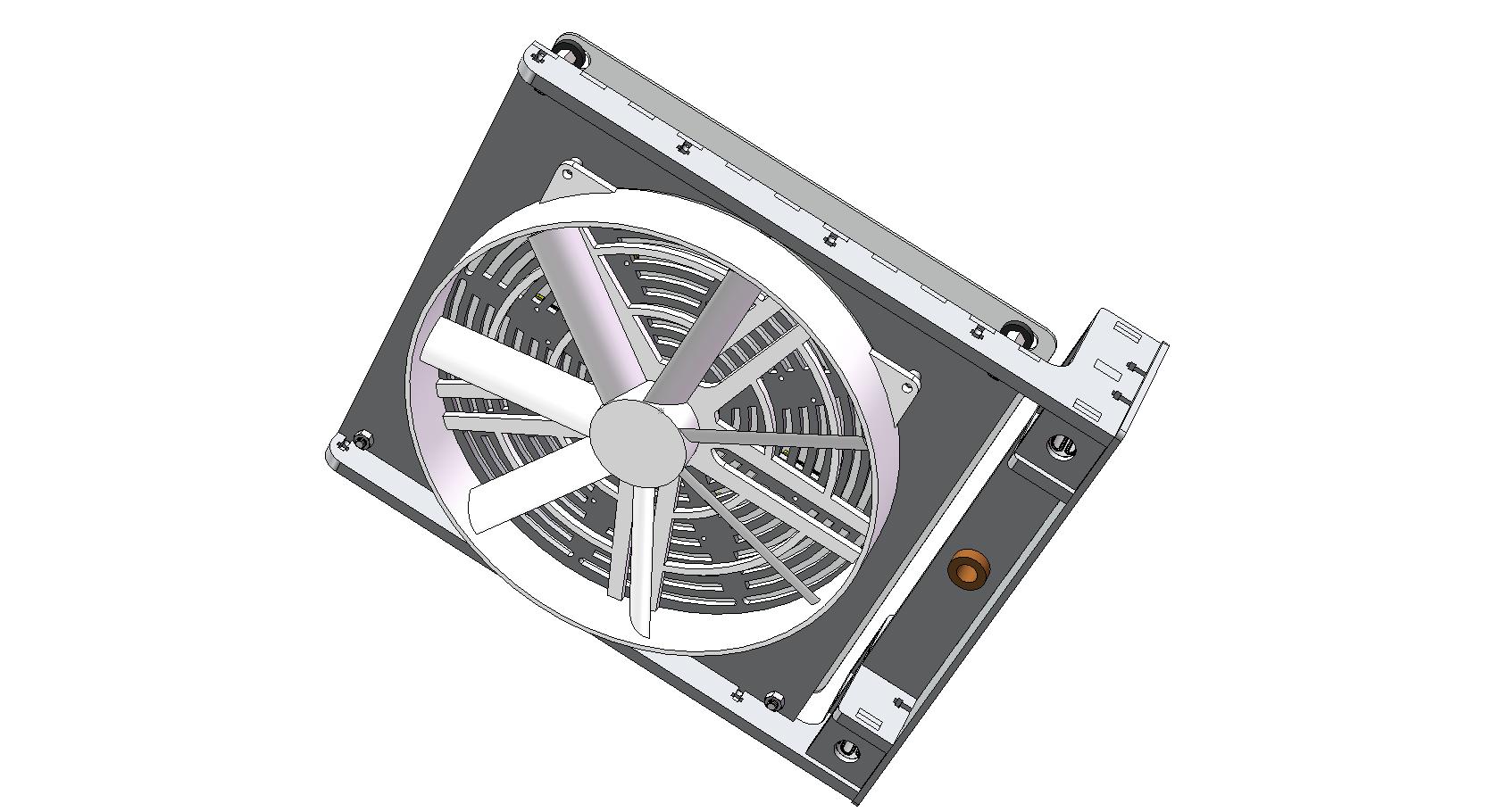 Did you know that they make PC case fans that are 250mm across? I didn’t know either until I accidentally found one on eBay while looking for real industrial 200-300mm class fans. In fact, they make case fans up to 360mm. Why the hell do you need a fan that big on your computer?

It turns out they don’t actually move much air at all – I ordered a sample one from xoxide for kicks, and it seems to be for case modders and PC builders who want to take the “large but slow moving air mass” school of case ventilation to the absurd limit.

But that’s actually exactly what I need – I’m not trying to build a hair dryer  or a heat gun, but something which will gently fan the sweat of my 8 power resistors onto the back of the build plate. Time will tell if they survive 60-70 celsius (I’m guessing not), but for now I have one designed in. More industrial grade fans are spec’d out if I need them, but if these fans do work out then more gaudy internal lighting for me. Maybe it’s time to start case modding your 3d printers.