This week has been filled with tiny things. 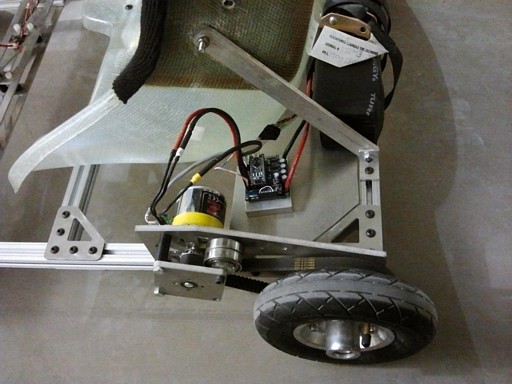 But unfortunately it didn’t last too long. As in, all of like 20 feet or something. 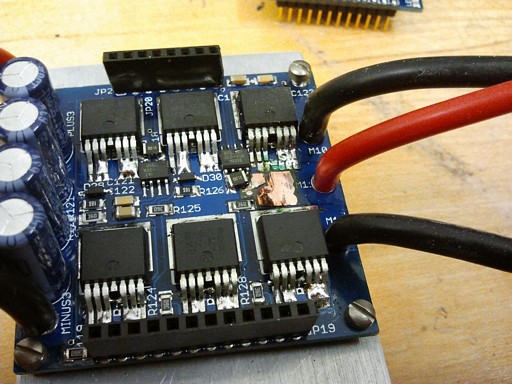 I’m not sure why this trace ended up blowing out. The controller was behaving normally during wheels-up testing and under low speed driving with or without heavy acceleration command. However, as the speed picked up under sustained heavy throttle, something must have hiccuped, causing a very high current pulse to flow and detonate the trace.

Nothing was damaged – the gate drive and both FETs on that channel still function, the Arduino still works (and lights up!), and I patched that trace with a copper braid afterwards. Tinytroller’s current limit was set at 60 amps using the same software from before with no Serial writes, I swear, so I can’t imagine it was running substantially overcurrent for a long period of time. But then again, I haven’t ever seen trace failures that weren’t associated with total malfunction before.

Time to lob it on another vehicle and see if it does this again.

Oh yeah, I forgot about this: 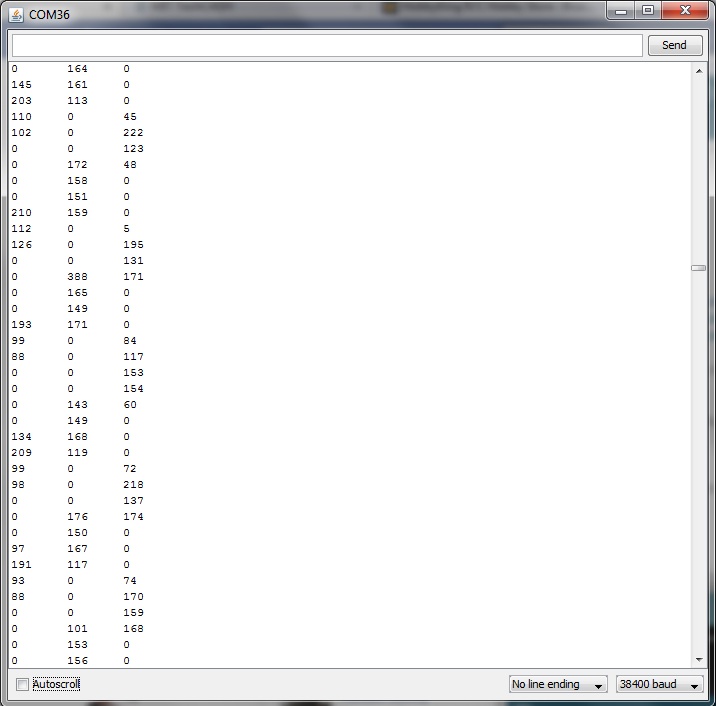 Those are the phase voltage readings from Tinytroller while slowly commutating a Kitmotter. This was sampled once every slow loop just to test the phase sensors, so the values really do not reflect what’s going on in the motor (those would be updated 7800 times a second otherwise). If you squint at it, it looks vaguely trapezoidal.

That’s good. That means once I muster up the software balls to try it, Tinytroller can be SENSORLESS!!!… and maybe one day I’ll even have ArduSensorlessFOC or something…. SensorlessFOC-duino?

…and now for the more interesting thing.

I mentioned before I was playing with a native, integrated twin-head extruder design for the Next 3D Printer. Over the past few days, I’ve refined the idea a little and created a design which I will build and test to see if it’s valid. It mounts two NEMA 14 (not 17) motors side by side with a symmetric filament path and adjustable roller-based feed tension, which is something I wanted over the solid plunger of MaB’s current extruder.

I’m fairly positive the NEMA 14 steppers will have enough torque to push the filament, but to be even more certain, that’s why I’m going to build one. 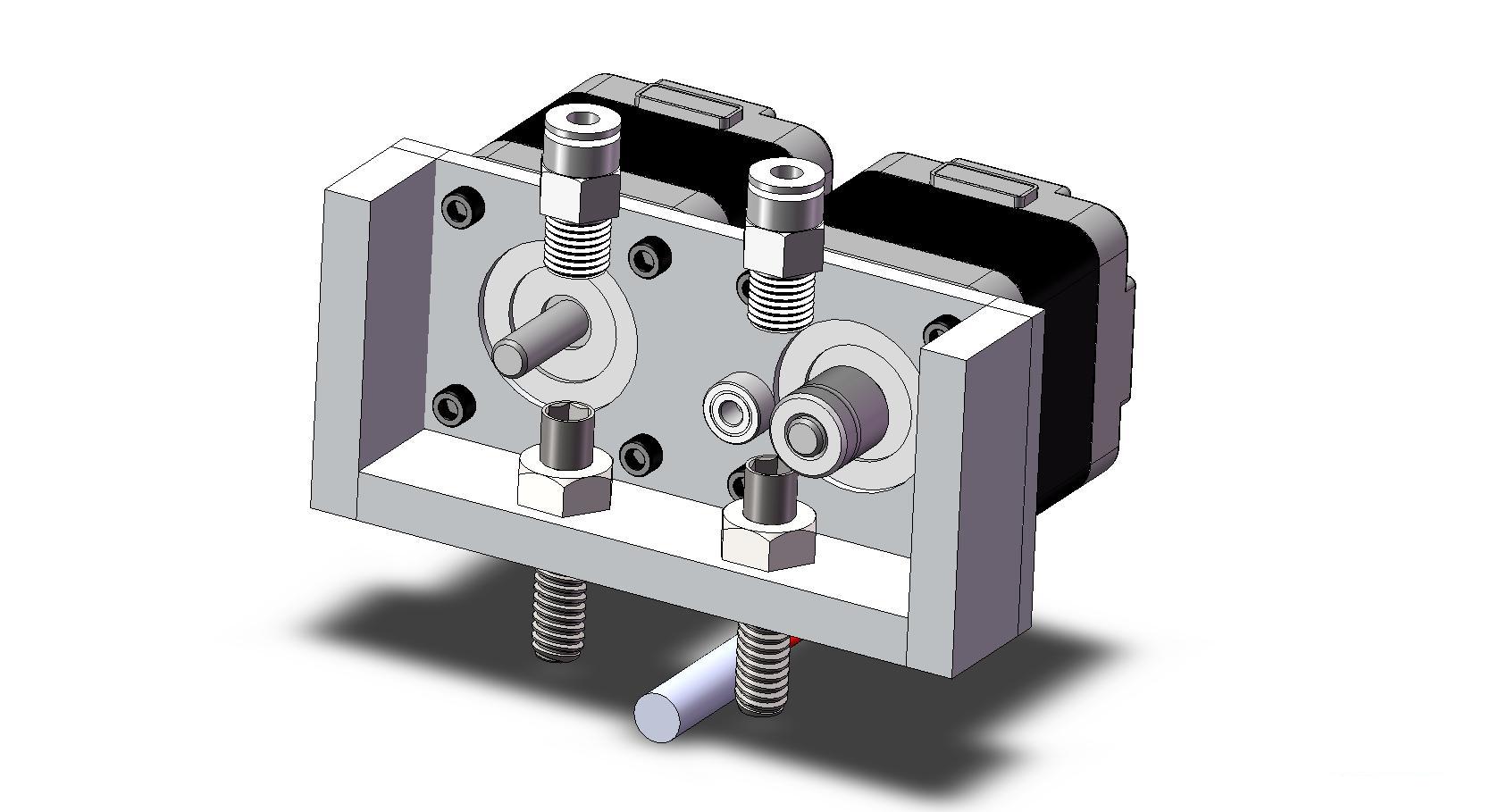 Oh right, I’m doing this in SOLIDWORKS! I’ve always been a Child of Autodesk Inventor since they were the first to indoctrinate me in 2005 by sponsoring FIRST teams (and because they give out free 3 year student licenses with nary more than a .edu email address), but the chief solid modeling program around here is Solidworks. When approached with Solidworks questions, I’ve always tried to figure them out and give directions in terms of Inventor equivalent functions. Not all of these map 1 to 1, and SW still has several user interface tics I’m not used to, so in my capacity as future mother duck of engineering students I’ve decided to force myself to use SW and become acclimated to it. SW still seems a little rigid and less liable to letting me fudge everything, but that’s most likely because I haven’t discovered all the shortcuts and tricks yet.

Anyways, it took the longest time to get to this stage in the solid geometry modeling since I thought of several ways to keep the filament properly compressed between idler and drive rollers, as well as different ways of arranging the motors (face to face versus side by side, etc.).  I tend to mentally visualize a design completely before actually CADing it – since mistakes in creating geometry in CAD still implies starting over and wasting time, so this stage was accompanied by several cumulative hours of staring at the ceiling intently while rolling through maybe 3 or 4 unique designs.

I’m going to use teflon tubing (and quick fittings) as filament guides, so the two fittings are shown. They might not be the final ones, since McMaster doesn’t have many CAD files for its fittings. I ordered a bunch of candidates for measuring, so that part might change.  The “stalks” that the hot ends will be mounted to (3d printer speak: “thermal barriers”) are modified 1/4″-20 vented cap screws, their center vents drilled out to 2mm. While 5/16-18 screws have a native 0.08″ center vent (which is like 2mm anyway), I determined they were excessively large. The 1/4″-20 cap screw will be machined down such that its head is 6mm in diameter to clear the future filament tensioner.

While I would rather do the modern worldly hipster engineer thing and use 100% metric parts, McMaster doesn’t sell metric vented cap screws – the nearest source I found was Small Parts, and they cost $26 for 10. This, along with the fact that it is much easier for me to buy 1/8″ and 1/4″ aluminum instead of 3mm and 6mm, and there are no such things as miniature U.S. unit bearings, means the whole thing is an ugly mashup of metric and U.S. units. I might start totally over with U.S. unit components as much as possible to save having to do the ugly dual unit thing for the entire design – but we’ll see.

I already bought a ton of metric screws <:(

I yoinked the MK7 drive roller and cartridge heater models from the Stepstruder MK7 CAD files to fill in for placement. Since I think the Makerbot drive roller is the most nifty thing ever, I’ll definitely end up keeping that. 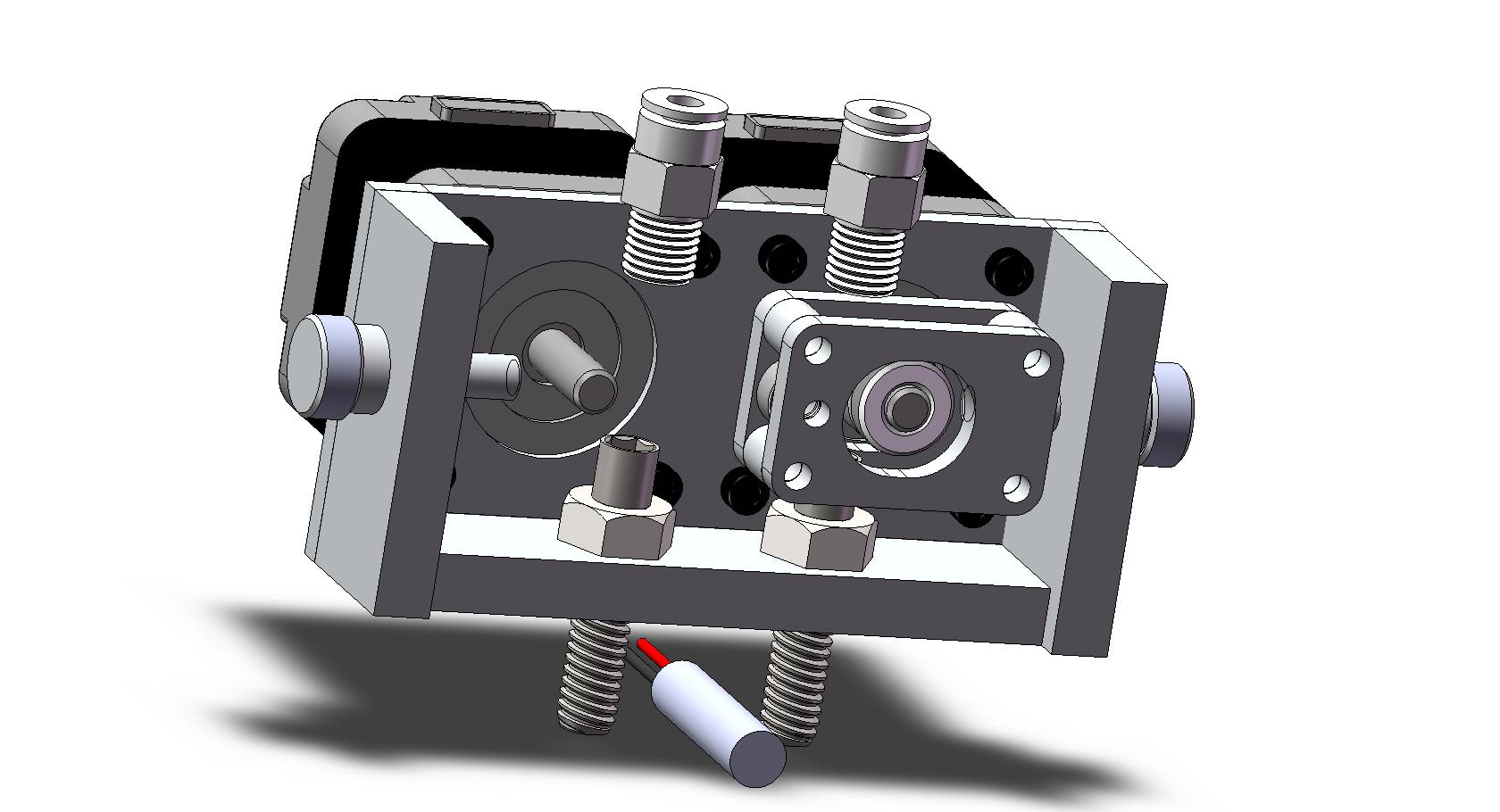 The filament tensioner is a cage-like assembly that slides over the drive roller and is pulled towards and away from it by an external thumbscrew. I had previously thought of using a cam-like assembly in the center, such that twisting a knob releases both filaments, but this method is more straightforward if not tightly integrated and cute. A 693 type miniature metric bearing (because they do not make miniature US bearings) is the compression element.

The cage is guided by the 6mm machined head of the cap screw and axially fixed by the threaded portion of the knob. The cage edges are also just wide enough to fit between the four motor mounting screws, constraining it (kind of) further. These three not-really-contraints would make MechE professors cry, but I think they’re enough. 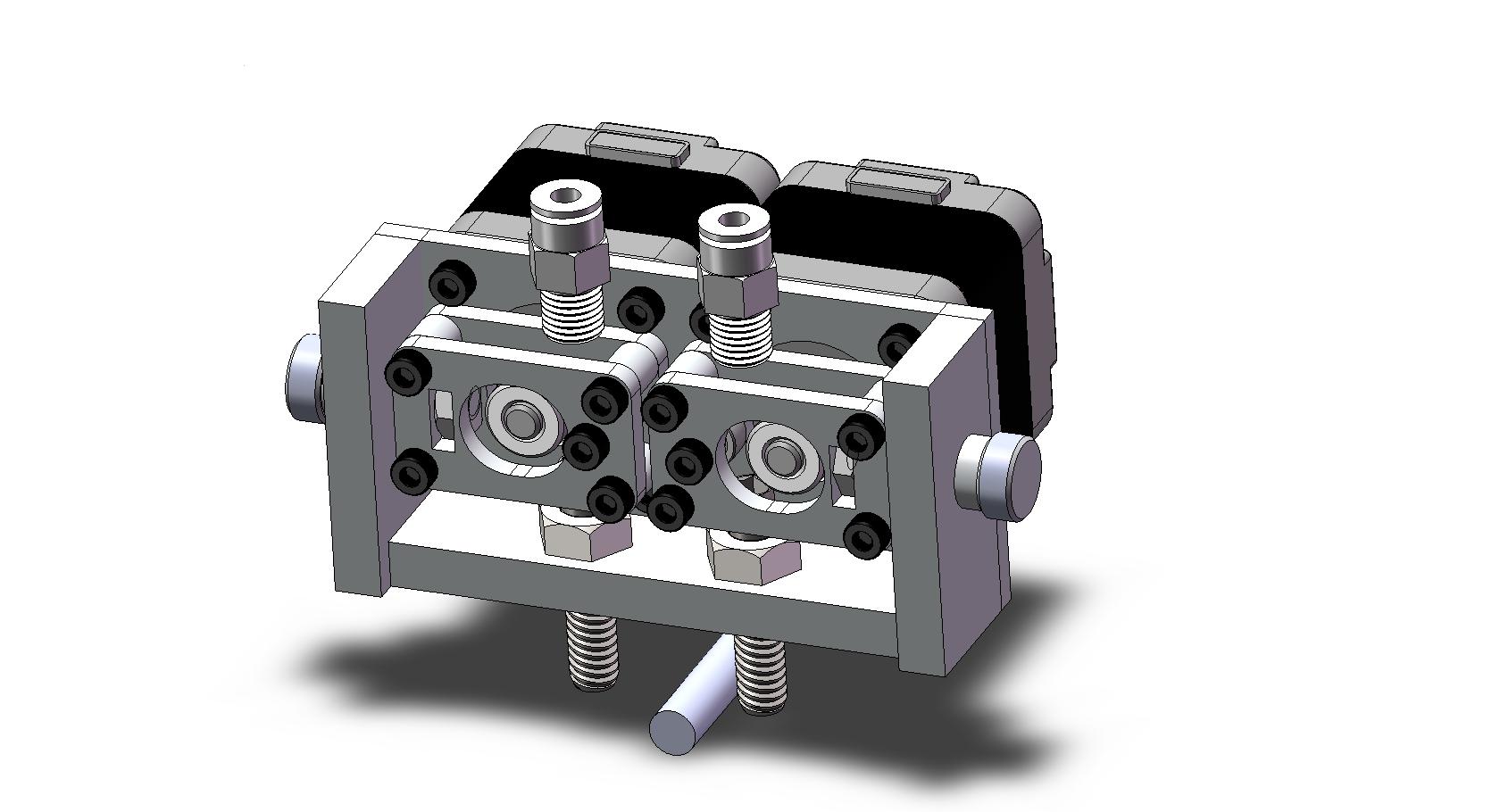 Now with both cages in place!

I rarely insert screw models into parts unless I really need to test clearances, like in this case. This is where I’m glad McMaster-Carr has digitized something like all of their common screws. The modeling is almost excessively detailed. I mean, the screws have actual helical threads of the proper geometry. If I made an equivalently real-helically-threaded hole and turned on Collision Detection, Solidworks would let me Real-Screwdriver it in.

This is why I want a multitouch Minority Report interface for CADing. Right now. 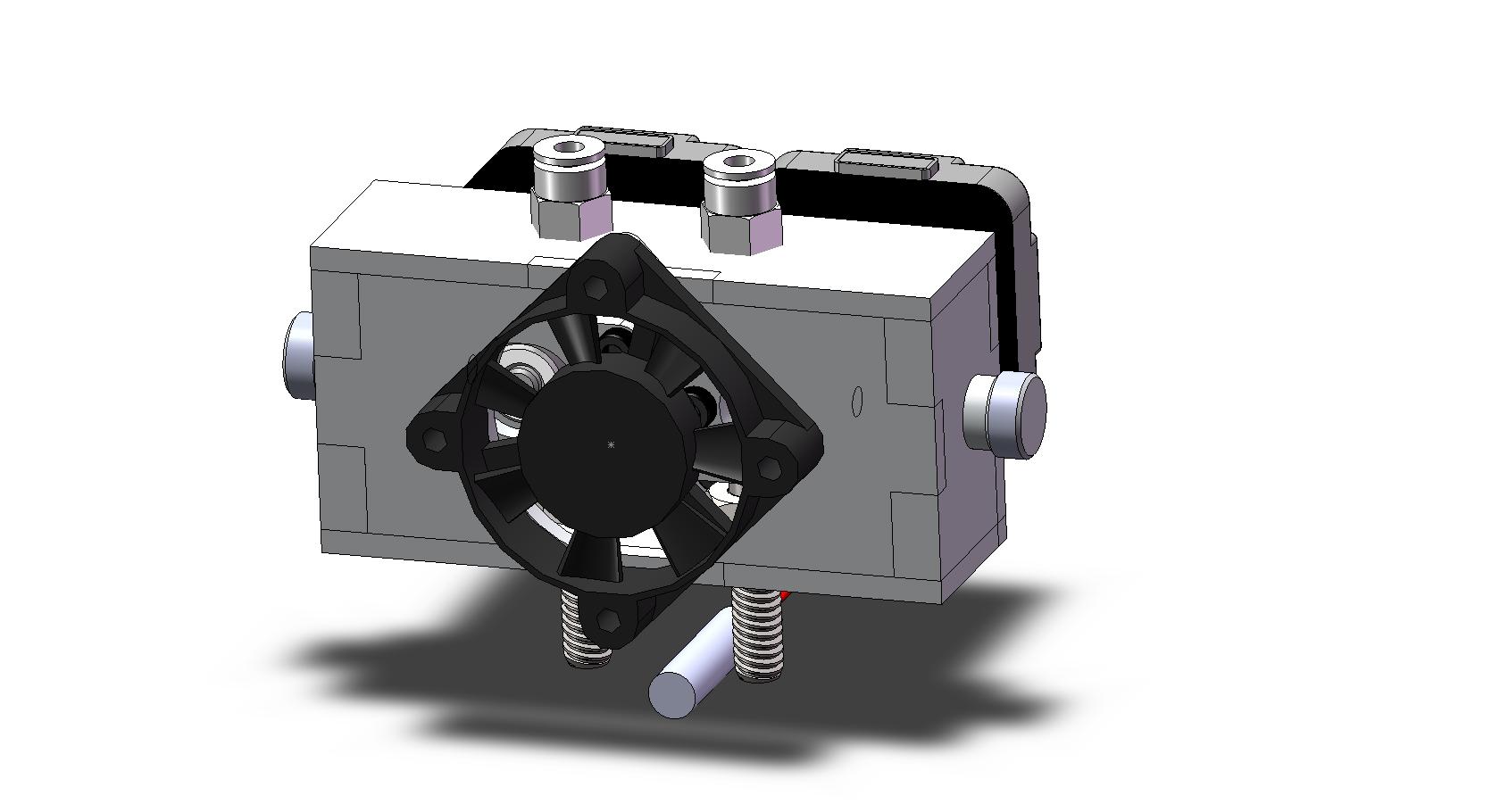 The box has been closed off and some of the slotting work has been started. Tinystruder is too small to use a 40mm fan per motor – instead, I’m using just one. I might consider a high speed 20mm tall type rather than the conventional low speed, 10mm profile fans in popular use. 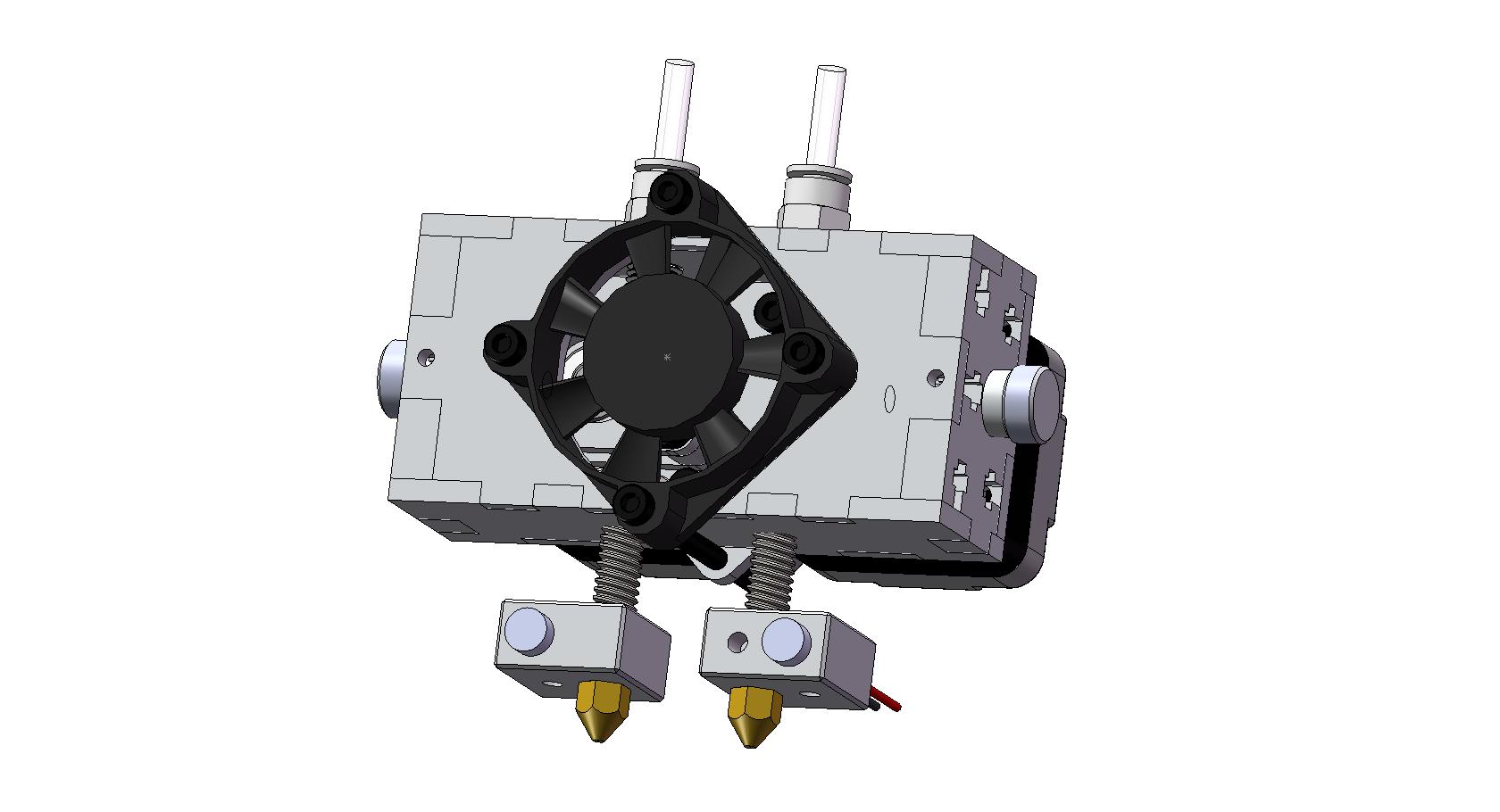 Now with more t-nuts. There aren’t many places to t-nut extensively on this, unlike my larger creations, so I partially depend on extending the fan mounting bracket towards the back using 50mm long M3 bolts to supplement the attachment at the edges. The crossing M3 bolts restrain the box at the points of highest bending stress – where the filament is being pushed downwards – and also keep the top and bottom together in the center.

I borrowed the MK7 hot end model for visual representation. You can’t get the heater blocks separately (grr), but they seem easy enough to duplicate with my own block of aluminum. I wouldn’t have been able to use the MK7 stock hot end anyway – my block needs to be half-threaded 1/4″-20 and half-threaded M6 x 1. Otherwise, the hot end is about as small as it can get – I briefly played with making the thing even narrower so the two heaters can sit in the middle between the stalks, but I began running into sub millimeter wall thicknesses on the parts.

So what is the fan blowing into? It’s just pressurizing a plenum in the above image and not really contributing to keeping the motors cool (as cool as 60-75C can be) or preventing 250+C extruder heat from seeping into the extruder body. 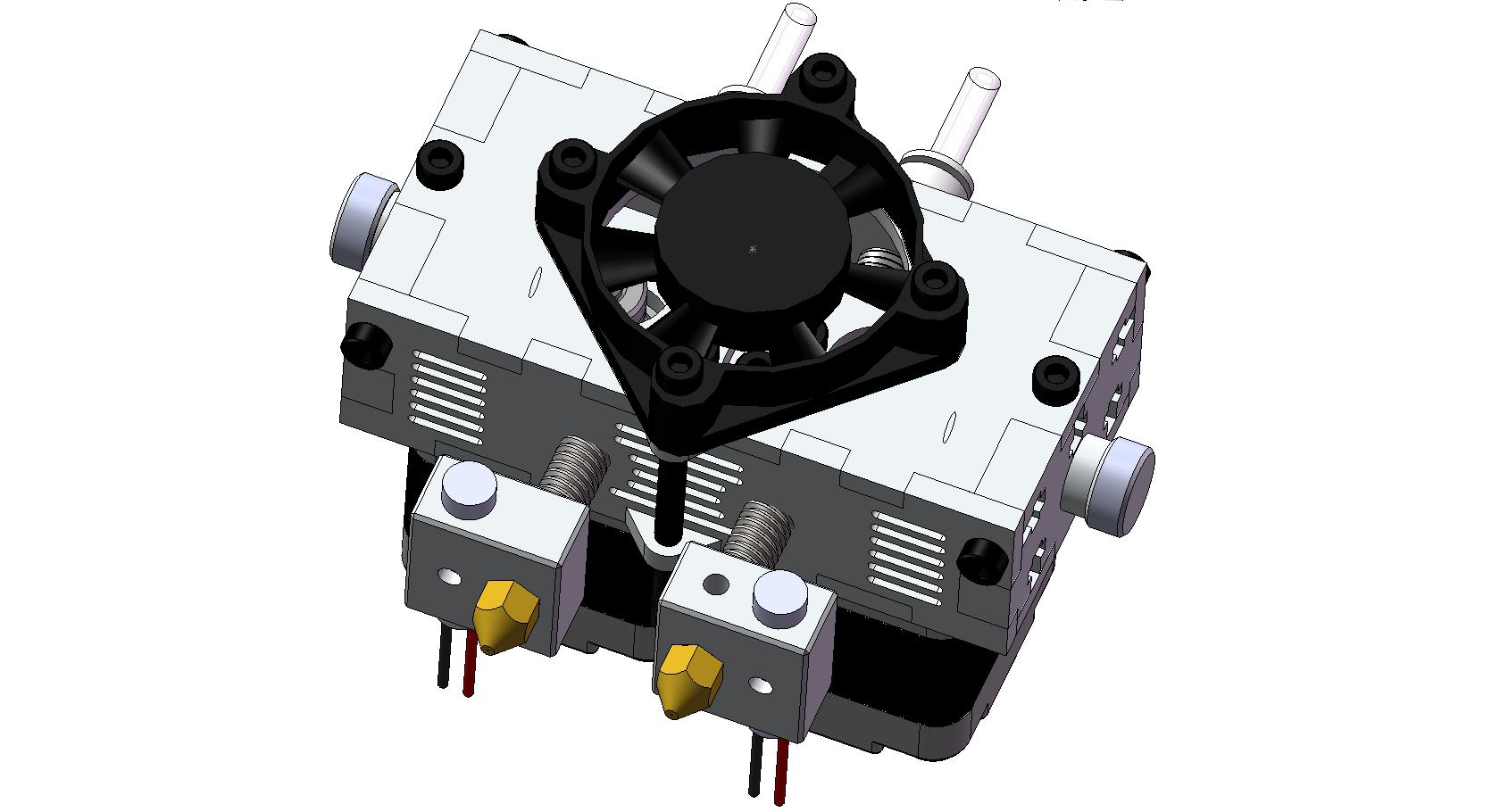 At least to address the second problem, the fan exhaust will blow through these vents on the bottom. The vent geometry is mostly for representation at the moment, and they might be widened or shrunk later. The idea is to have the center set act primarily as heatsink fins for the cap screw thermal barrier, which I will also turn down in diameter in the middle to minimize heat leakage. The exhaust also blows directly downwards and so can “hot chill” the part being printed to chamber temperature quickly. Certainly another argument in favor of a fan with some extra push to it.

If I were a better graduate student, I would actually heat-flow simulate this whole thing to validate the vent design.

I haven’t really thought about how to keep the motor temperature acceptable yet. In the final mounting scheme, there might be another set of fans at the back just to direct chamber air over the motors. They are very close together, however, so I lose two entire sides of convection area. Thus, Tinystruder might grow a little. 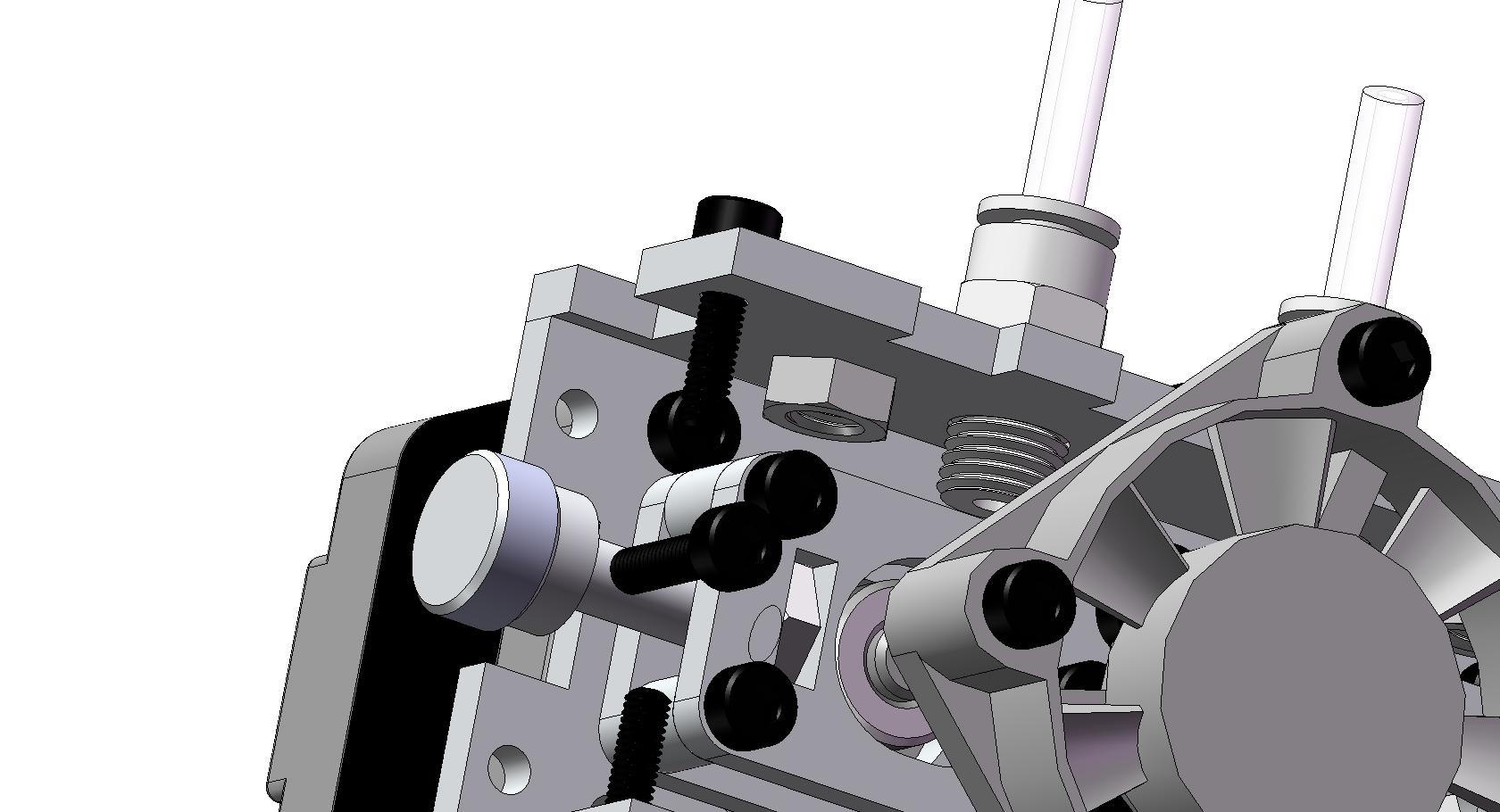 Up until now, I didn’t even think about how the thing would be mounted. Ideally, tinystruder will be hung under the head gantry, so I focused my attention on the top plate for mounting purposes. I didn’t want to directly thread into 1/8″ thick aluminum – it just seemed like a bad idea, nor could I reasonably mount a loose nut on the other side for a nut and bolt connection.

The answer came in the form of press-in nut inserts for sheet metal. These things have a splined section you hammer/press into an appropriately sized hole, and it acts as a hardpoint in your sheet metal assembly. 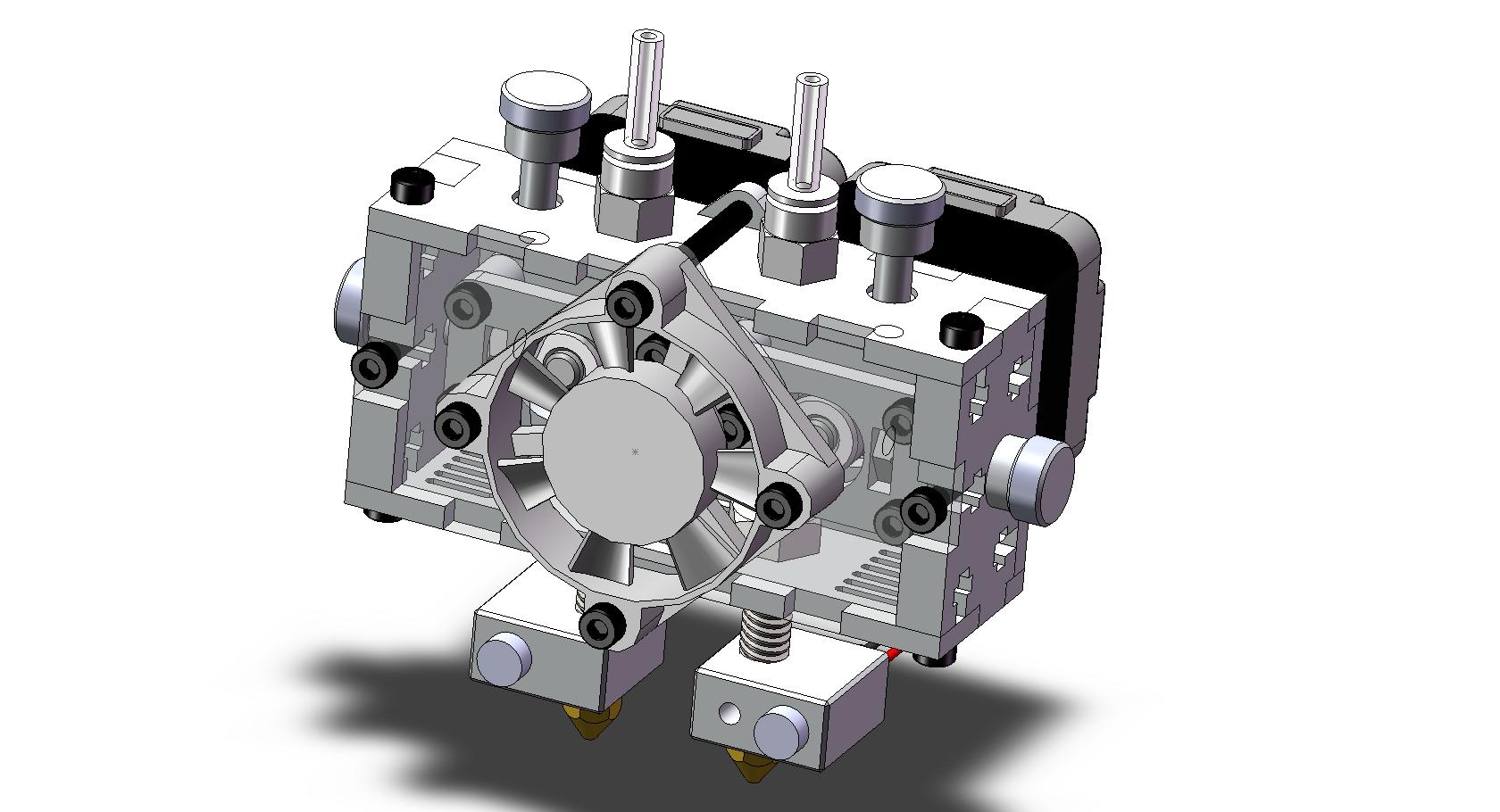 Final assembly, with virtual transparent faceplate so the action inside is visible. For some reason, my fan model suddenly became white. Hmm, weird Solidworks behavior…

The two thumbscrews will be the mounting interface to the not-CADed-yet gantry interface, which will have two little ears to accept the thumb screws. Otherwise, the top surface is flush on either side so the mounting ears have a seating location. For ultimate MechE trollage, I might try making this interface a kinematic coupling (as if the rest of the machine is precise enough to warrant it).

I’ve already ordered all of the hardware and screws as well as nozzles and the drive rollers from Makerbot. I’ll need to locate 1.75mm filament somewhere else, since they seemed to be out of stock at the time. The frame parts will be waterjet-cut from stock I already have, so I’m hoping this can be built by the end of the week. However, more problematic is that the cartridge heaters were out of stock too – should have gotten them a week ago when I figured I’d needed them. I suppose I have no qualms about sticking a ceramic resistor in place of it or zip tying a soldering iron to the thing.

The big test for tinystruder is actually running inside a 60-75C ambient environment, which I will probably supply with a space heater in close proximity. If it can reliably push plastic for extended periods of time in such a test, then I’ll be satisfied.

By the way, mad ducted fans to whoever pitched in 20 bucks the other day in the tips jar.  It’s well appreciated (and in fact it was absorbed into an order for stepper motors)!