First, if you’d like to see what the aftermath of a ducted fan nibbling on my arm is, here’s a picture. Be ware, it’s fairly bloody, so if you’re not the kind of person who regularly receives small injuries or who is into Internet gore, it would be better to pass  it up.

Anyways, it’s here! The updated Tinytroller signal board from a few posts ago has materialized from MyroPCB’s mysterious printing facility somewhere in northern Tajikistan, or so I believe. 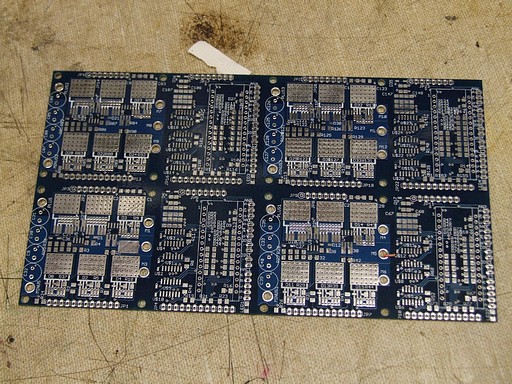 Well gee, it looks the same as the previous panel. I’ve gotten into the habit of buying boards in quantities of 4 or 6, because Myro’s panelization fee is paltry and I just send the entire panel as one “part”. As long as it stays under 30 square inches for their entry-level service, I can has more boards. At the rate I’m killing Tinytrollers in beta, this is probably beneficial.

The board is actually a little different. While I only moved one resistor on the power board (circuit otherwise remaining the same), I’ve replaced the first iteration electrolytic logic power capacitors with all ceramics. This is partially an experiment – all ceramic buscaps can have extremely low ESRs, ESLs, and be more reliable (being solid state) than electrolytics. While it’s totally not warranted for a non-precision app like a motor controller, I did find a pile of 1210 package, 22uf 50v ceramics on eBay for cheap. This means the potential for 88uF native on the input, more if I abuse the footprint and use the caps sideways or just pile them on top of eachother. The output capacitance remains the same at 66uf (22uF, 16v ceramics in parallel).

I also shifted the signal board headers leftwards a few mils such that they actually clear the power input capacitors. 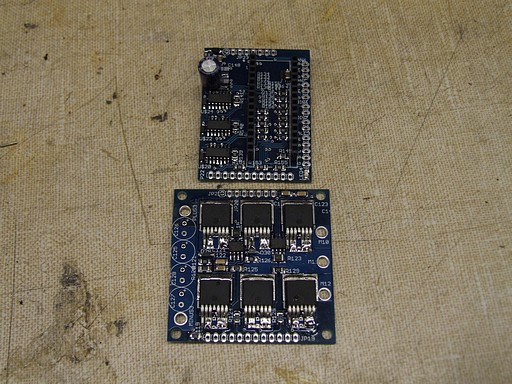 I spent the evening putting the boards together – these are the last six 3107s that I can just reach out and grab, so I hope this actually works. I’m also out of Arduino Nanos – more from the mysterious eBay electronics cloud are coming, but they’ll take a while.

The downside to a totally new board is totally new debugging cycles. I spent a while chasing down a dead short on the signal board. It was in fact so dead that it took jumping 5 amps around and feeling which traces heated up several times before I cornered it to a clearance-related issue which was literally right under my jumper wires…which explains why I ended up somehow pumping that much current through the “board” without doing damage – I might as well have twisted those wires together.

There is an area near the top row of headers where I grouped the 5v and GND lines together a little too closely (less than 3 mils) and it looks like Myro’s etchwork might not have sufficiently caught the gap. 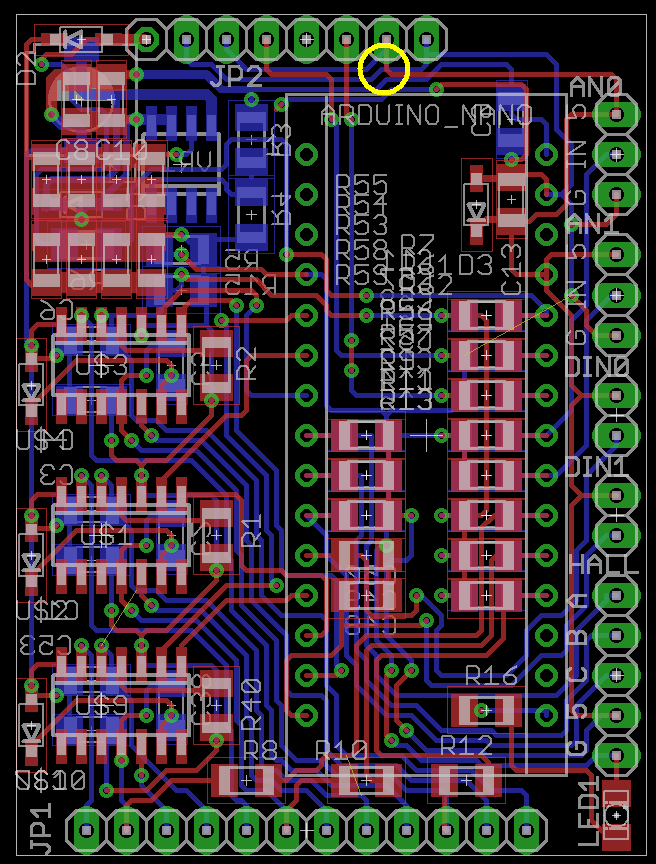 It was dispatched with some knifework. The rest of the circuit seems to be unchanged and sound. I ran this board on the “sit and PWM into thin air” cycle for a few minutes to verify the gate drive and logic power operation – anything drawing more power than it should would be noticeably hot by the end. 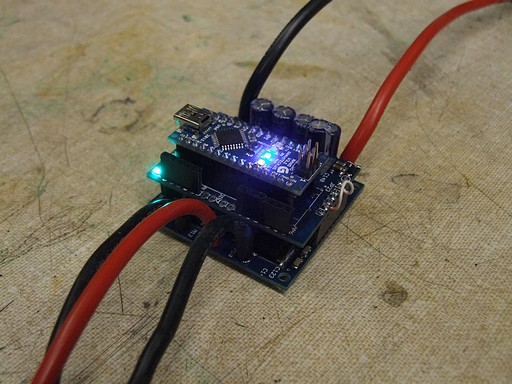 Here it is… looks kind of the same as before, right? The little wire jump on the right is to make up for the fact that I had to cut the errant 5v trace.

There are some Arduino pin definitions that have changed on this board, but tomorrow I will re-upload the current control code and modify it to run on this version of the board. I should be able to read all three phase output voltages as well as the DC bus voltage. Then it’s LOTS OF SOFTWARE away from SENSORLESS TINYTROLLER!!!!

I’m thinking of putting this Tinytroller in melonscooter. Not only because I want to try running my own equipment for once, but because Tinytroller has demonstrated proficiency at variable regenerative braking with Straight RazEr, and it’s even survived the Radu Test, where Radu floors your creation around everywhere (it’s a rite of passage for MIT Random Small Vehicle Team creations). Melonscooter also has the capability of drawing far more amps, and the Turniby C80/100’s extremely low inductance and resistance means the current control has to be very robust.

Also, I’m fairly sure this thing can commutate faster than 550 Hz.