Every year, after duckling season, what is it time for? ROBOT SEASON! For the past 2 weeks, I’ve been making repairs and improvements to the (still yet to be settled, mind you…) 2014 fleet for Dragon Con, my annual end-of-summer robot party, as well as helping work on another thing.

This update will be quite short and to-the-point, seeing as how we’re setting out in about 8 hours or so. Robots at the top, panel information at the bottom! Normally, all of this would have come earlier with more interspersed information, but my shop obligations (namely restoring the place from a complete tornado disaster) take priority.

I’d mentioned near the end of Motorama that Clocker desperately needed a new wheel solution, and that I was looking at the Banebots hex-hub wheels to pull off a similar fast-changeable wheel solution like Candy Paint & Gold Teeth.

So I designed just that. A 0.75″ Delrin hex rod chunk functions as both the hub and the wheel bearing. Grooves cut into the hex mount retaining rings to keep everything in line axially.

Notice that those are “duallie” wheels. I decided to go for double wheels because these Banebots wheels are also not known for hard wearing and long lives, so I figured spreading the damage out could help. Clocker would probably burn through a set of singles very quickly, and while these hubs are meant for faster wheel changes, I still don’t want to do that every 2 matches.

The result is that the bot got wider by about an inch total. Not bad, but I still had to remake the axles. 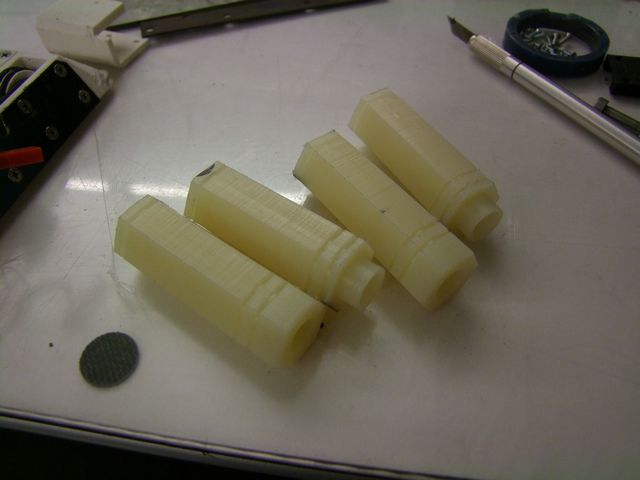 I tried finding Delrin hex material, but it doesn’t seem nearly as common as other plastics in this shape and I’d have to buy 4+ feet from something that wasn’t McMaster-Carr. Well, I need it yesterday so I changed the material to Nylon instead, which is still more than sufficient, and I could buy it in much smaller quantities. Nylon is nice and all, but I still prefer the machining properties of Delrin. 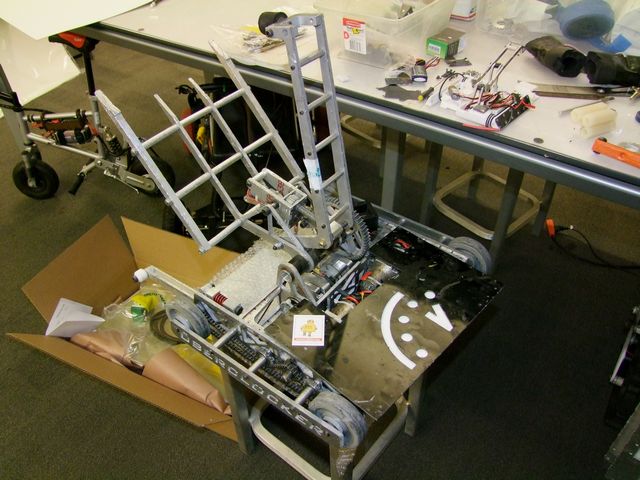 And so the 100th build picture of Überclocker is in in a state of disrepair. I took the lids and most of the drivetrain parts off to inspect everything for damage or required rework. Overall, besides the bent front legs (and totally bald tires), everything is in good shape. 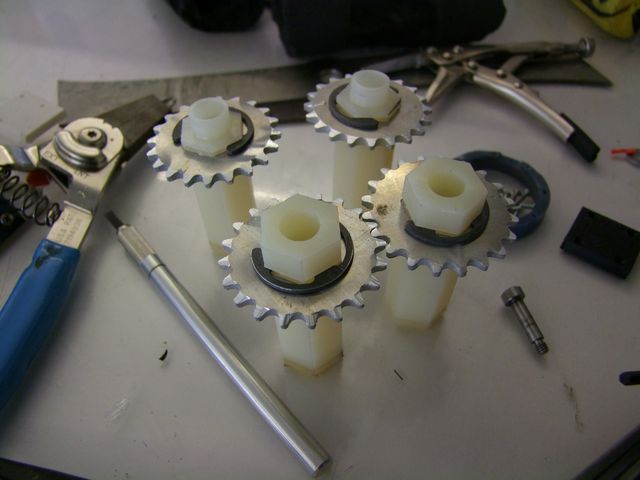 After trying to stretch a traditional circular retaining ring (“circlip”) onto the hex hub, I realized the points of the hex are just too wide to use that style – the legs just bent permanently since the deformation was basically up to the next shaft size. Well a trip to the hardware store netted some E-clips, which slide on from the side. Perfect! 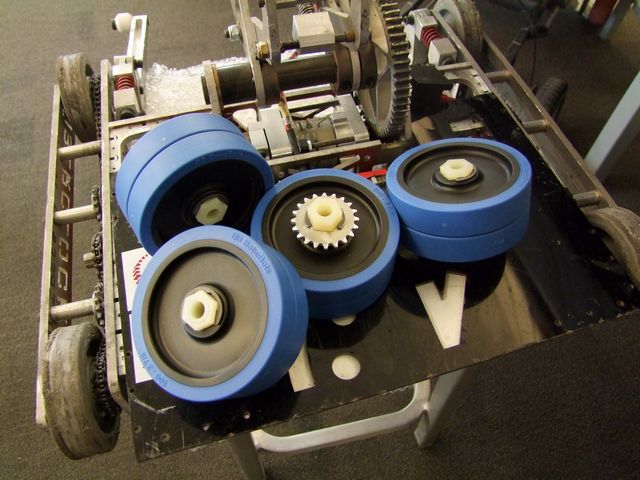 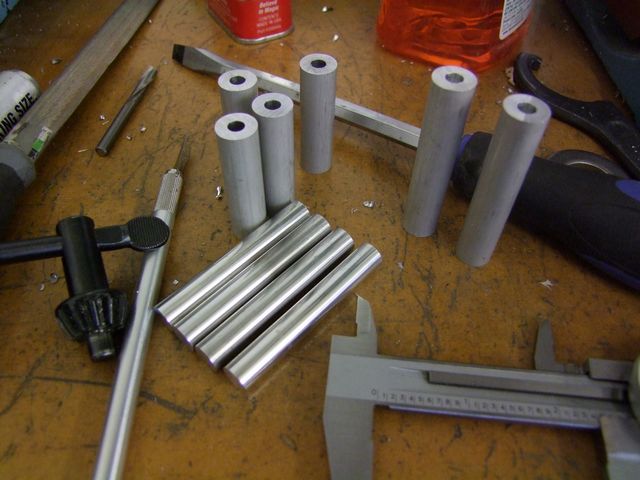 I ordered some 7075 aluminum round stock for the new axles and standoffs, since the length I needed was greater than the amount I had remaining from the last build. The four highly polished shafts (1200 grit wet sandpaper, using Tinylathe as the power source) are the wheel axles. 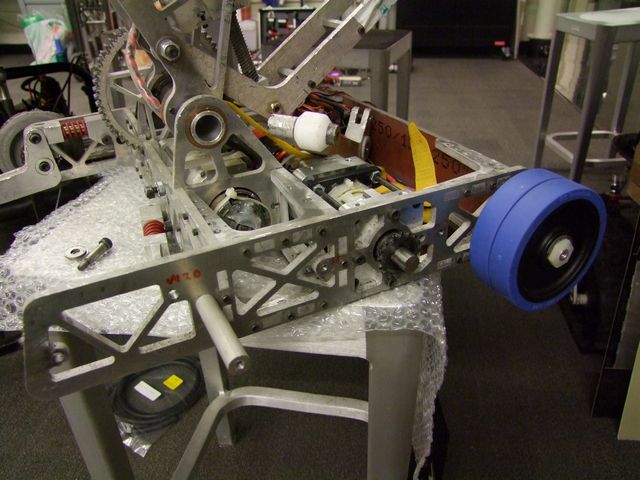 With this part finished up, I began restoring the legs. The only thing wrong with them was that the mounting points bent. They’re mounted each hinged on one 1/4-20 cap screw surrounded by a heavily preloaded standoff. Even though this extremely rigid, it still doesn’t like the whole bot bouncing off them. I had to replace the bent bolts and resurface the standoff to be square again.

Furthermore, one of the legs had a broken end roller with the remains of the shoulder screw embedded inside the aluminum leg. After cursing for a while trying to get the stub out, I decided to brute force machine it out and press in a large “insert nut” of sorts. 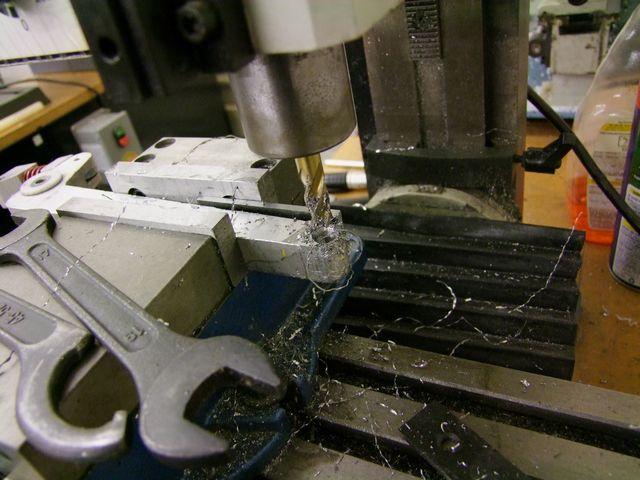 Removing the broken screw by milling straight down through it… 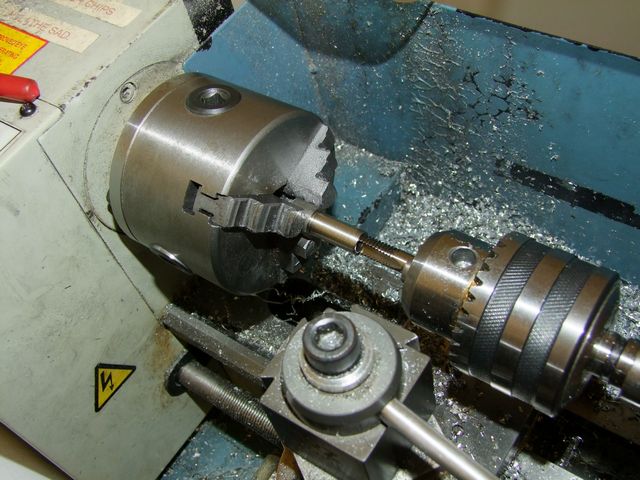 Making the insert nut, which has a press-fit outer diameter and 5/16-18 threaded ID. 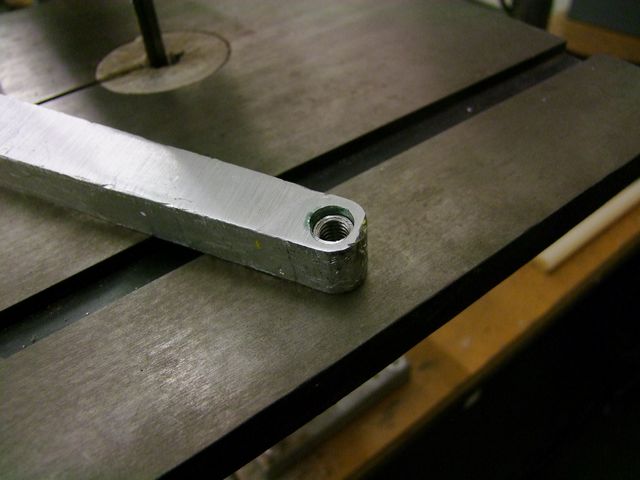 The repaired thread in the leg. This is no longer as strong as the contiguous virgin metal, but it’ll work for now. I ran out of both stock and time to get new leg beams cut out. 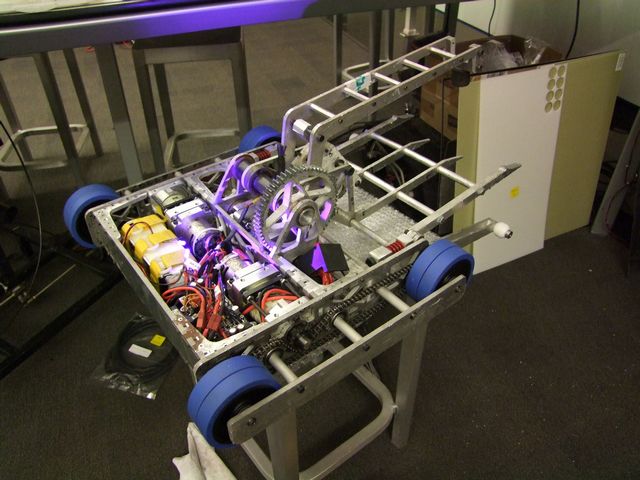 Buttoning everything back up!

The ‘glory shot’ for this time around!

I’m highly satisfied with how the new BB wheels handle. What I wasn’t satisfied with was once again how closely I routed the chain to the wheels! I always seem to manage to design a chain drive with a critical but obvious failure owing to me trying to think of chains as precision components.

Nope. Chains are made of ass, and I need to design like ass to use them properly. Oh well.

In this test match between Clocker and Jamison’s somewhat new 30lber (which he’ll certainly update about, right brah?), the right side’s master link clip was torn off by some scrubbing wheel action. The left side’s master link had its retaining clip oriented inwards (away from the wheel). I resolved this by flipping the chain around so the master link clips were all on the inside. I’ve yet to lose another chain, so here is hoping to continued good luck.

Überclocker has no other changes besides the new wheels and the requisite screw tightenings.

It’s well known that I have everything in multiple scales, so it’s time to pull out 12 O’clocker again. It did not compete at Motorama 2014 due in part to the lack of a Sportsman’s Class for the 12lbers, so DC2014 will actually be 12 O’Clocker’s second event.

It works fine. Hell, I could have thrown it right back in with no changes at all, but I did want to make a modification to the leg retaining system – specifically, making it actually function. The current leg retaining system is a big washer and standoff, which works fine for the upward direction that the leg is loaded in normaly, but if someone takes a good run at me, the leg gets pushed downwards and props the front of the bot off the ground.

Well, that kind of defeats the point. Here is the new design.

It’s just a clippy thing. That holds the leg from moving in either direction. Cool, huh!? 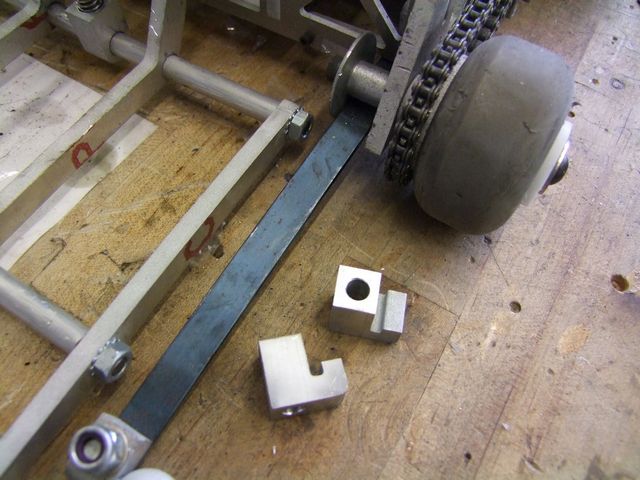 The profile shape is waterjet-cut, with a single drilled cross-hole. It’s still topologically equivalent to a standoff! 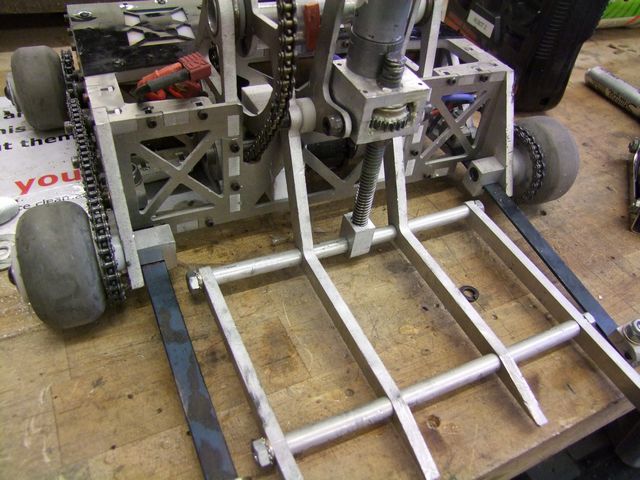 And here they are, installed!

That’s it for 12 O’clocker pictures. What, were you expecting more?

I did make some minor adjustments such as face-machining the leadscrew nut gear to reduce the amount of surface area subjected to sliding. This will hopefully make the arm less likely to “bolt” itself onto an opponent – the motor should always be able to free it up now. I also tightened up the chain drive so it doesn’t, well, Clocker itself.

12 O’Clocker will receive no further mods, since it really has been working the WHOLE TIME!

Whoa! I still have this bot!

Last seeing action some time in 2011, it’s been hanging out in a bin I call the Mass Grave of Little Bots since it contains Pop Quiz, Pad Thai, and Colsonbot alike. As well as enough parts for another 2 or 3. I never repaired PQ after DC2011 since I had other bots to tend to, but little bots are always fun to dork around with, and with two working “big” entries (12 and 30lb, anyway… this isn’t 2002 any more where 340lb was “big”…), why not try to revive them?

Pop Quiz won’t be the only 1lb bot I try to revive – the entire Mass Grave is being brought down to Atlanta for some party time at the Georgia Tech Invention Studio. Whatever we all get running will enter, but I will not try too hard on the rest.

As for PQ itself, it’s going to get a complete from-the-ground rebuild, so it’s time to increment the number. I wanted to go directly to Pop Quiz 3.14, but I think I’m past naming bots after silly math jokes now.

Here is an overview of the new design:

Major deltas from the 2011 version: A much, much shorter blade. Titanium top and bottom. And a one-shot 3D printed frame that isn’t made of chunks of smaller prints.

Why the SHORTER blade? Are you crazy? Isn’t robot fighting always about who has the biggest spinning weapon?

Well, I mean, yes, but the longer the blade, the more likely the bot will just destabilize after a hit or, as Pop Quiz in 2011 did all the time, just hit itself and take off. That’s counterproductive to winning, or doing anything besides flailing around upside-down.

In the past, horizontal blade spinners have won, such as Hazard. Notice how relatively short its blade is – it’s principally a defensive wedge/pusherbot that just happens to have a pimp-slapping device on top of it, not a blade with wheels as so many spinners are designed today. PQ2 was designed this way, and the blade was easily 200% of the bot’s own width. Exacerbated by a lack of rigidity, it was a master of self-eating but not much else.

The blade this time is only 7.5″ across, a little thicker, and made of hardened steel instead of titanium.

A few minutes of consultation with the designer, Kurt, and some other bot folks, led to this: the integrated Fingertech switch. I was just going to harvest the internals out of a stock switch and insert it into the 3D print file.

Besides this mod, the internals will remain basically the same. In fact, I’m almost straight up transplanting the working electronics from PQ2 into PQ3: Vex #29 controllers for the drive, 7.4v 500mAh lipo battery, and four little Sanyo-esque motors.

I added some small changes to the frame (such as the Integrated Fingertech Switch), but for the most part, this is the 2011 frame, except this time I’ll actually 3DP it in one piece instead of 4.

When I opened the old PQ up, I was greeted by ….. a giant lockwasher? This must have been underweight!

The Spektrum BR6000 seen to the very left (the front of the bot) will be changed out to a Hobbyking 6 channel receiver to match the rest of my objectively downmarket radio system. 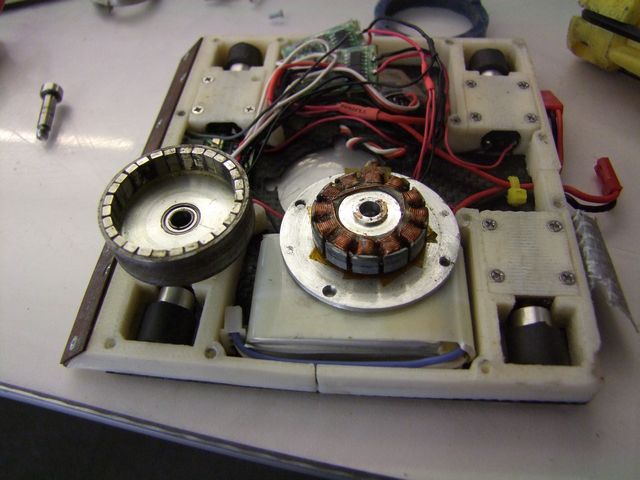 The weapon motor. I haven’t been in here in a long time, either. This thing still ran well, and I made no changes to it. 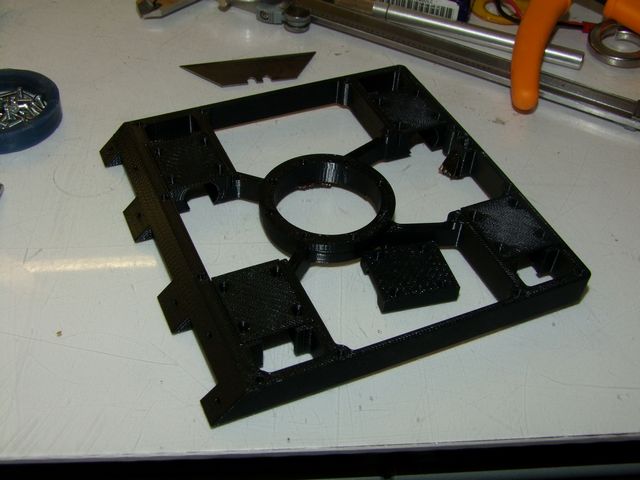 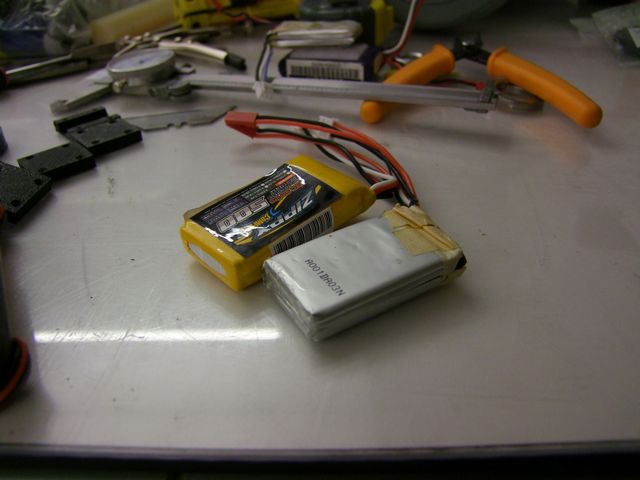 A few weeks ago, I ordered a bunch of small 500mAh 2S lithium batteries from Hobbyking of the same specification as the old ones. However, the general trend in lithium cells (as reflected in the auto industry, fast food industry, and smartphone industry) has been to get thicker/larger/bigger. I had to un-package the Hobbyking stock battery in order for it to fit in Pop Quiz’s 0.400″ thick frame! 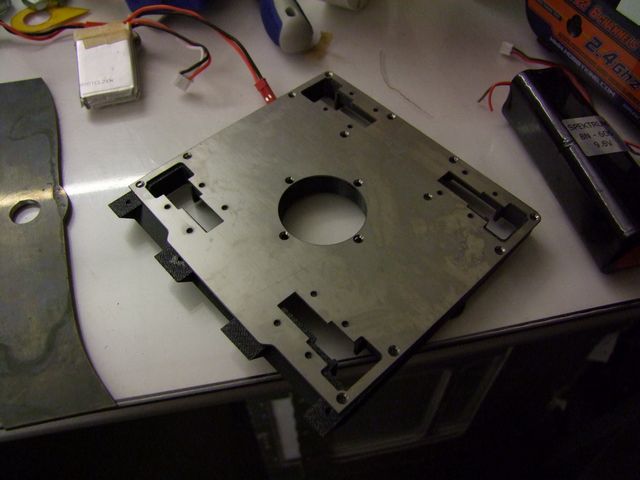 The new top and bottom plate are no longer carbon fiber, but titanium. I caught a great deal on grade 5 Ti sheet on eBay.

I used the MIT Hobby Shop‘s new MicroJet to cut this piece out. It operates above water, so the light show was quite intense! 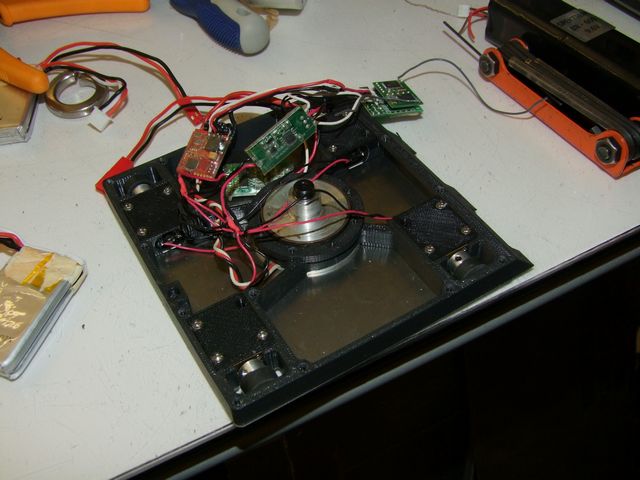 So that’s pretty much the state of the bot as it stands now. Again, everything else will be either finished or not finished as we hang out with the GTIS folks, who are apparently also building their own entries this week. Old habits die hard…

As per usual in the past few years, I’ll be either hosting or co-hosting a few panels:

More details on these will be released as they get closer. I’m going to try my darndest to get these recorded this year – I say that every year, but I really swear to Baby Robot Jesus this time, guys!!!

I’ll check back in after we’re in the ‘hood.