Well, here it is! Colsonbot was finished in the intervening 3 days between the previous post announcing its arrival and when we all shipped off to Bot Blast. The event was a blast indeed, and I’m furthermore glad we even got there in the first place! Here’s the whole story. 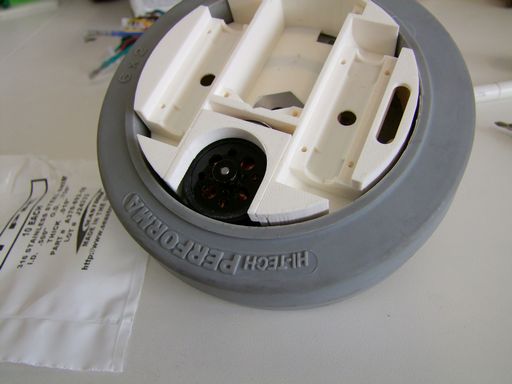 This is the friction drive module fully assembled. A little printed rim attaches around the motor, around which I sling some stretched-out O-rings. I recommend everyone who is considering O-ring friction drive make sure that the rings are not bought “on-size”, since if they are, at high operating speeds they will stretch out and be more likely to pop out

Tension in the friction wheel mechanism is maintained with a stack of wave washers. I was hoping for enough space to put a very short coil spring, but it ended up that I really only had 4-5mm to play with. So, wave washers it is. 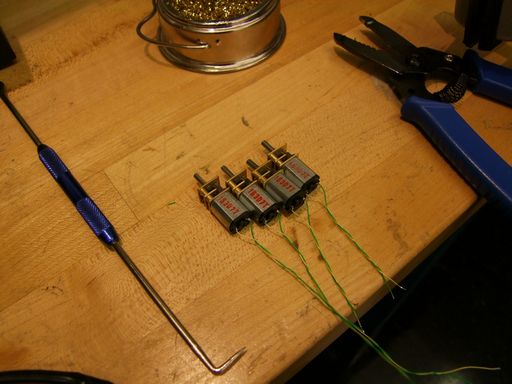 Since this bot is way more unibody than anything else I’ve built, I needed to construct most of the wiring harness first before installing the motors. Here are some of the Pololu 30:1 HP “Sanyo-flavored” gearmotors being prepped with wires. I call these motors “Sanyo flavored” since originally the first on the market in the robot world was the 75:1 Sanyo micro gearmotor. 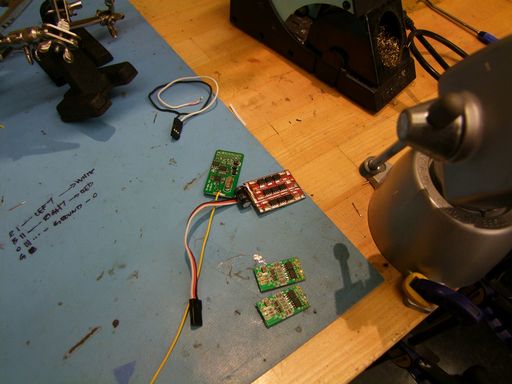 Other electronics being prepped include two Vextrollers, one of the left over 18A ESCs from tinycopter version 0, and a gutted Hobbyking receiver. Everything had to come out of their packages for this bot since the space was extremely tight. 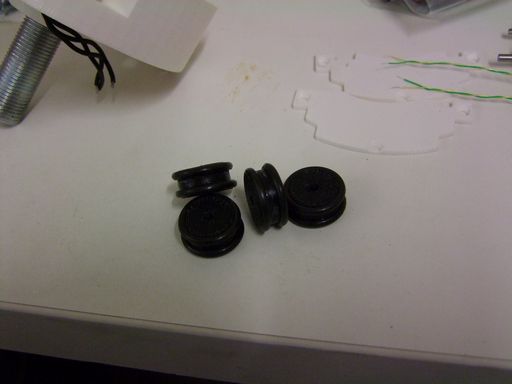 The wheels are also 3D printed affairs. They’re little duallies made with O-rings. The center bore is pre-flatted to mate with the Sanyo motors with a set screw hole on the flat to keep them secure. 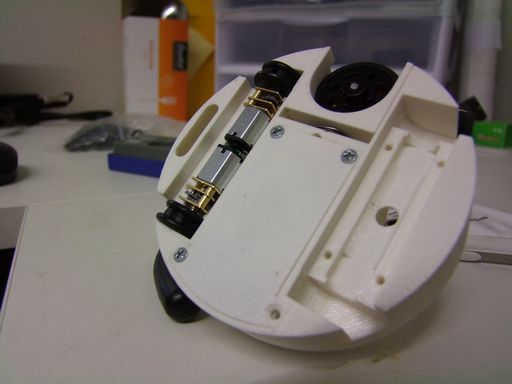 The installation sequence is wheels on motors, then motors into their mounts. 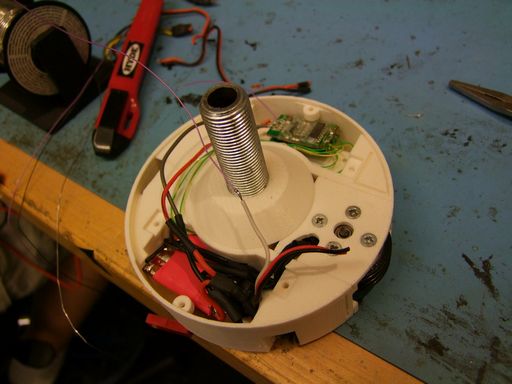 The center shaft of Colsonbot is a single hollowed-out 5/8″-18 fine threaded bolt. The hex head was machined down to 1/8″ thick, and it rests flush with the top of the battery cavity in a hexagonal cavity which prevents it from turning as I tighten the clamping nut.

Wiring on the bot can be described as “ad hoc”, to keep it politically correct. I used no connectors at all – there’s not enough space for the ones I had. To reverse motor directions, etc. meant desoldering.

Most of the wiring is done with 30 gauge wire-wrap wire, with heavier currents such as the brushless controller and two Vextrollers done up in 24 gauge. 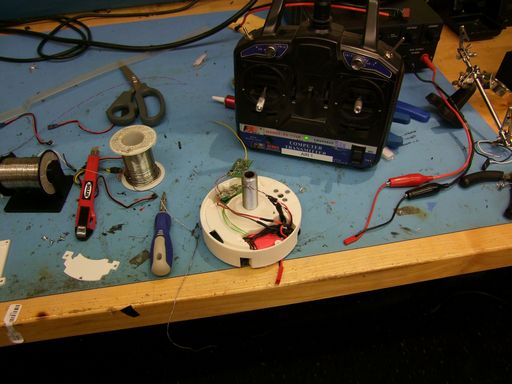 First power test! This was just to verify that everything was still working and hooked up the right way. 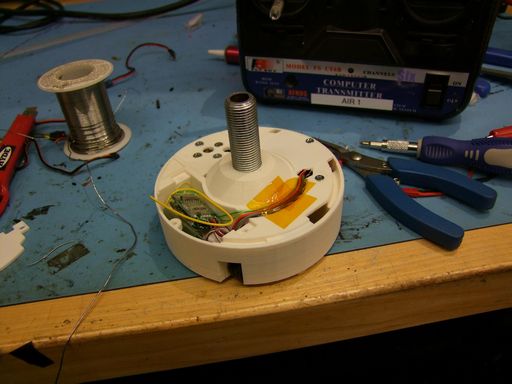 Starting to add the other snappy-lids to keep things constrained. The electronics are mostly just piled inside the cavities. I had thought of making little exactly Vextroller shaped cavities, but realized I would never have put up with that level of cleanliness. It’s just a little too Apple. 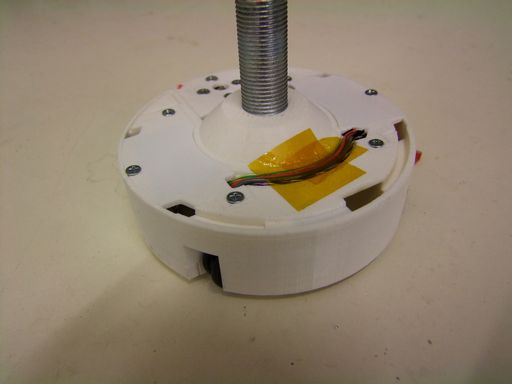 Lids attached. The external wire run is unceremoniously held down by a glob of used Kapton tape harvested from the Hobbyking battery. 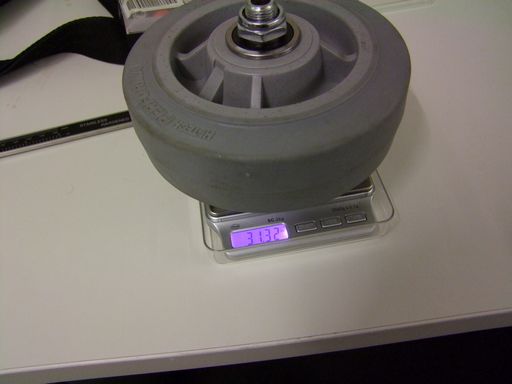 Time to put everything together and find out exactly how not a 3lb bot this is. Turns out the answer was not even 2 pounds. Great…

I knew Colsonbot would have a not-enough-weight problem since it could literally be made of lead and be fine. There’s just not enough volume of bot inside the wheel. Colsonbot’s base by itself, at 10 ounces, would actually make an excellent 1lb shell spinner with a 6oz real shell. This is something I’m considering for Dragon*Con, now a little over a month away. 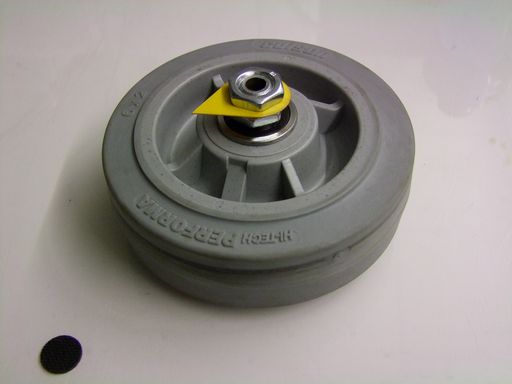 With a second 5/8″-11 jam nut and a bit of thin PETG plastic, I made this direction indicator since otherwise I had no idea which way the bot was facing underneath! 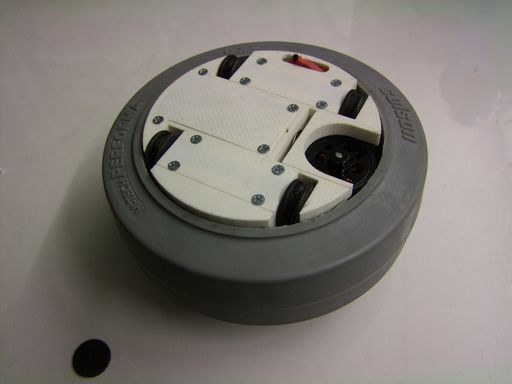 And here is the soft underbelly!

Check out some of the test footage:

Colsonbot being  a roughly square 4WD setup, handles extremely well and it’s also quite peppy. It really does not need this many motors. As can be seen in the video, it “gyros” extremely easily due to the large spinning mass. I originally wanted to put a “mast” up high over the wheel so it could flip back over, but I decided to keep the wheel illusion. If Colsonbot gets flipped, it will tend to stay upside down and wobble like a coin.

This work was done on Thursday evening. I left Colsonbot alone after that to help out with the two new stragglers we inhaled: Jaguar (by the way, check out his excellent Instructable on his even more excellent Orbit Wheel pod things) and Julian. Of these two, Jaguar decided to start a new robot some time around 1AM Friday.

Great, now we’ve increased from four to six people. I was really getting worried about Mikuvan’s mechanical integrity at this point – six guys and another hundred pounds or two of robot gear times 800 miles round-trip plus mountains. If I was going to grenade something, it was going to be on this trip!

On Friday afternoon, I gave the engine cavity a more thorough check over. My primary focus was on the timing belt, since I had observed some leaking oil on the front underside of the engine, leading me to think leaking camshaft/crankshaft oil seals, which would throw oil all over the belt and cause quicker deterioration. Otherwise, I had already done a mechanical once-over after the Adafruit Adventure. To my surprise, the timing belt cavity was dry and there were no signs of abnormal wear on the belt, and the tension was still good. So where the hell was all my oil going, then? 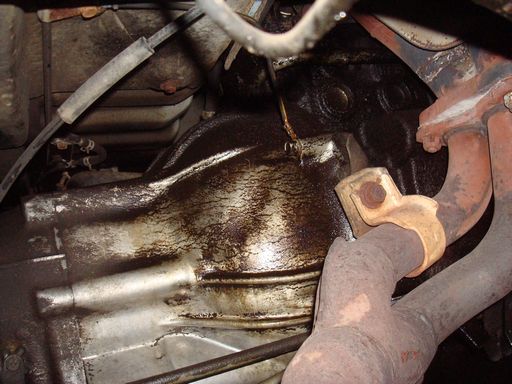 That’s the back side of the engine where it mates to the transmission. I see a new sludgebunny colony is starting to form. This is the area I cleaned a few months ago to see where the oil leak was, and… well, this just tells me it’s coming from everywhere. The side of the block is still well-coated in grunge.  I definitely have no idea where this could be originating from. Valve cover gasket? Rear crankshaft seals?  I’ll write it off to built-in underbody corrosion prevention for now.

Since after the New York trip the oil level was low, I topped off this time with some heavier weight oil – some Mobil synthetic 10W-40 (the manual calls for 10W-30). Time to see if those “for high mileage engines” claims have any merit. The slightly more viscous oil might reduce the rate of runoff if nothing else. 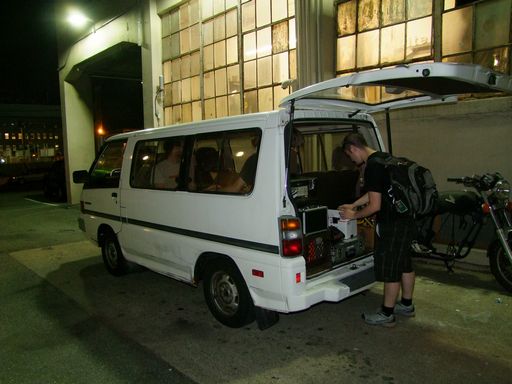 Whatever the case, it was time to ship out. Space Battleship Mikuvan was temporarily commandeered to become the MITERchan Party Van. Having only like 105 original HP and surely less available nowdays to push 6 people and robot gear, this was pretty much my most conservative road trip ever – essentially spent all at less than 70mph and almost all in the right lane. If you know me well, then you know this is basically the opposite of my usual style. The van is teaching me some humility. 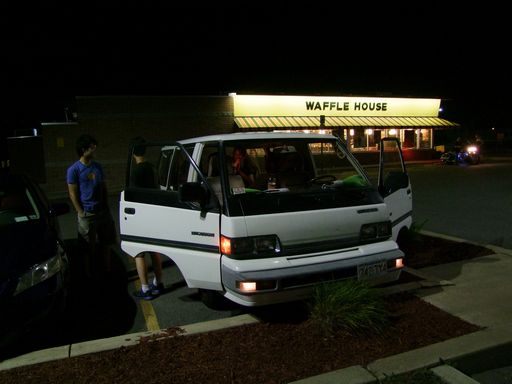 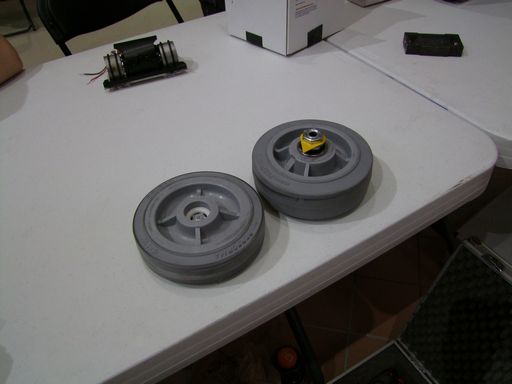 On site at the event… and there’s more than one Colson! On the left is Agent Colson, built from a 6×1.25 wheel – it’s flatter, but only 2WD, and also direct drive from a small outrunner. Colsonbot was originally going to be a DD from a large diameter (e.g. multirotor motor) outrunner, and that idea is still being entertained. 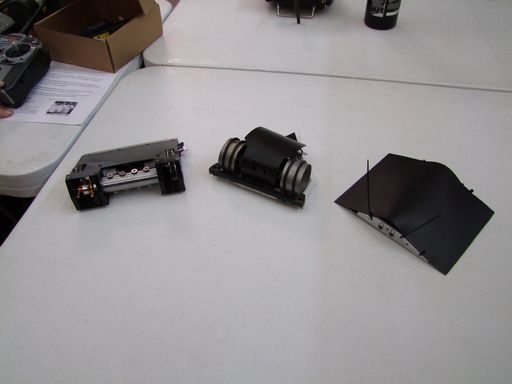 Check out the lineup of newbie bots. From left to right is Glorified Doorstop, DEL-RAN Bumble (by Dane), and Speed Bump (by Jaguar). Don’t let those eyes and zip ties fool you – the front of the bot is to the right. I’m glad that somehow in the last week we managed to generate an entire Battlebots team.

Motorama should take walk-up registrations like Bot Blast, because hell if you could get MIT students to commit to anything more than 1 week ahead of time. Trust me on this one.

The event was held in a regional mall, nestled between JCPenney and Payless Shoesource. Quite a contrast of venues from the typical grungy warehouse or barn you find these ‘bot events in. Because of the proximity to curious onlookers, the audience was pretty steady and numerous for most of the day. 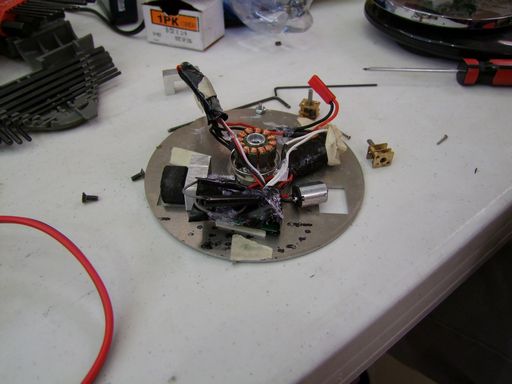 I don’t have as many pictures of everything this time, since I was either sleeping under a table or filming matches (And I’ve posted random robot pictures dozens of times). But here’s Agent Colson after one of its first matches, where it may or may not have hit the ceiling. Sad… 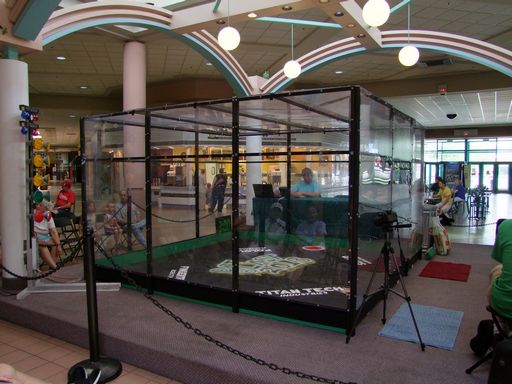 The box is a nicely build 12 footer which fit beautifully into the mall’s… band pavilion? Free Speech Corner? Not sure, but it sure worked well. 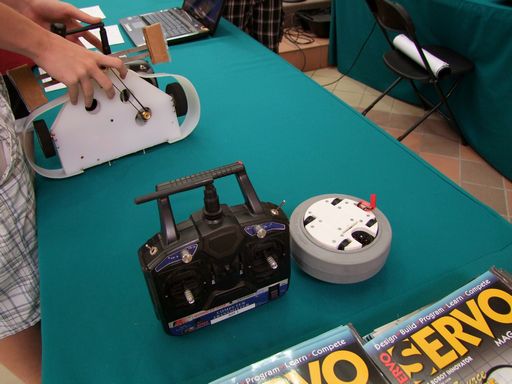 Colsonbot in line for its first fight… 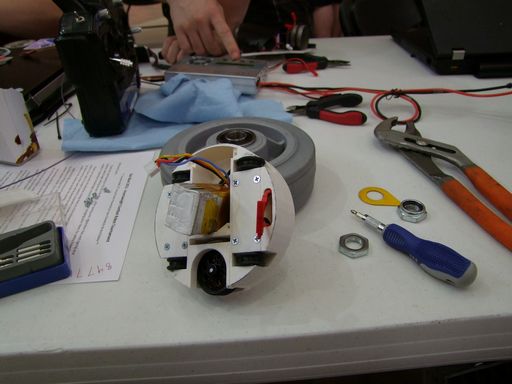 Colsonbot performed flawlessly during this match (of course it didn’t win anything), but afterwards I noticed the weapon motor was shifting in its slidy-mount. The motor was chosen as a compromise – the one I purchased from Hobbyking that was intended for the bot just didn’t fit. I used instead a Hacker A20-50S, which was admittedly undersized. 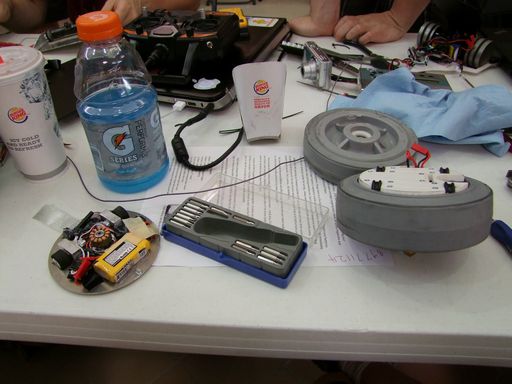 Both colsons being serviced in some way…

In my second match, I sort of went for broke at the end and tried to keep spinning. This resulted in the motor melting the ABS to the point where the friction wheel just sort of welded into its mount, stopping Colsonbot. I still had drive ability, though, so spent the next half minute just getting punted around.

Colsonbot suffered no particularly permanent damage at Bot Blast, and was a great first version run. Now that I know how this version performs, I can better build the Next Generation Colsonbot.

Boy, some “joke” this has turned into.

For Dragon*Con, Colsonbot will return. I’m currently thinking this as the list of changes:

Finally, here are Colsonbot’s two matches from the day!

Returning from the event was entirely uneventful, save for a short section of I-84 in southern New York which seemed to climb straight up a mountain for 5 miles. I realized it was hopeless after fully opening the throttle, falling back into 2nd gear, and was still losing speed. That stretch was done at 40mph with the heater fan on full as I watched the engine temperature climb slowly towards hot.

Clearly, I am never going on a cross-country roadtrip with this contraption as is – I will never even make it over the Rockies, and if I take the southern route through Arizona, would just light on fire regardless. By the way, Newburgh’s Stewart Airport which we passed next to is the site of the original Three Legendary Derpy Van showdown.

So now that Bot Blast is over, it’s time to start prepping for Dragon*Con. More on that later. The final thing to take care of is…

Here’s the entire Solidworks 2013 CAD folder for Colsonbot. Also included are the ready-to-print STL files for all the major components. You’ll need: