Last week, I actually rage-finished not one but two projects in progress. First was Colsonbot, whose test came this past weekend at Bot Blast; and second was Melonscooter 2, which has been tested every single day since then already. I’m getting to this update now because, well, Bot Blast. Melonscooter 2 is now done, save for remounting my signature orange basket.

Finishing the construction of Melonscooter was delayed by replacement timing belts and pulleys. After assembling the Epic Pulley, I measured the distance between wheel axle and motor and came up with the nearest timing belt size to order – this was done with the tensioners, which are of the axle-pulling type, in the most relaxed position so I could order the next size belt up. Turned out to be a 700mm-size (140 tooth at 5mm per tooth) belt with the 20 tooth pulley I wanted to use. Both of these were ordered from my next favorite belt and pulleymonger, BB Manufacturing.

Waiting on those parts was what delayed the build for a little while. But when they got here, it was time to take everything to completion in one night. 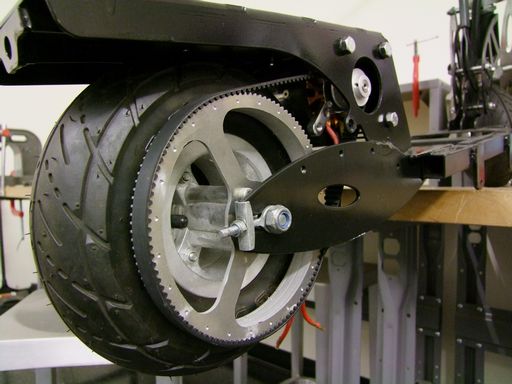 Here’s everything test fitted out and satisfactory. The overall ratio of this drive is 5.4:1, which is higher than my typical ratios for this size wheel (more like 4:1). For instance, previous Melonscooter had 8″ wheels, only 1″ shorter, but only a 4:1 ratio.

The reason I’m doing this is to extract a little more power out of the system by allowing the motor to spin fast. In my opinion, that’s a more tenable solution to R/C motor powered drivetrains, since R/C motors love to spin *fast*. By allowing the motor to spin fast, you can gear higher and hence end up getting more torque per amp out of the system (faster acceleration, punchier throttle, the classic stuff people want R/C systems to accomplish). This is especially crucial if you can’t have a Controller of Infinite Amps.

In my case, I’m limited to a 50/120A small Kelly Controller – 120 amps is all I get, so why not increase the peak power of the system by allowing the motor to spin closer to the Kelly’s top speed limit? At 38 nominal volts, the 80/85 “short melon” with its 170 RPM/V shoots a bit above what the Kelly can hypothetically keep up with, so it should be no problem when loaded down.

That’s also why you’d be hard pressed to ever get more than about 1000W from even a heavily modified Jasontroller – the top speed limit of the things is so low (about 4700 rpm on the average R/C motor) that the only way you have to get more out of the system is increase the current, which is on shaky component ground after 30-40A.

As BurnoutChibi shows, if you can get away with using a fast motor with a high gear ratio, it’s the way to go for sheer performance. If only drivetrain components were lossless – the high the ratios, the less coasting ability you’ll have since the friction inherent in the motor and power transmission is amplified by the gear ratio. I’ll stick with my almost-lossless timing belts, thank you very much, for daily use where I need other redeeming characteristics besides brute force (oh dear, I’m losing it…) 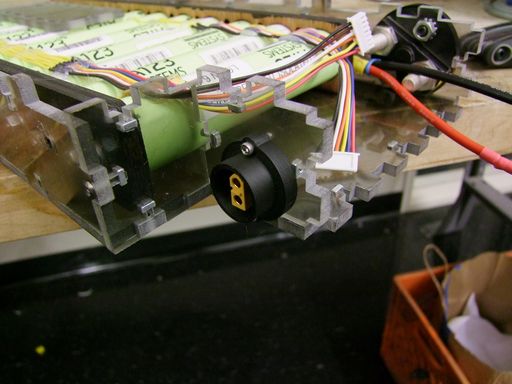 I broke out a charge point for the battery using a somewhat-shielded XT connector. My favorite for this is historically Deans, but I definitely find it hard to aim those things some times. Since this location is immediately inside the kickstand, getting a good line of sight would be harder, so a connector with a shroud like the XT is better.

Now, at least I’m not using the XT for actual power. I hate those things with a passion. 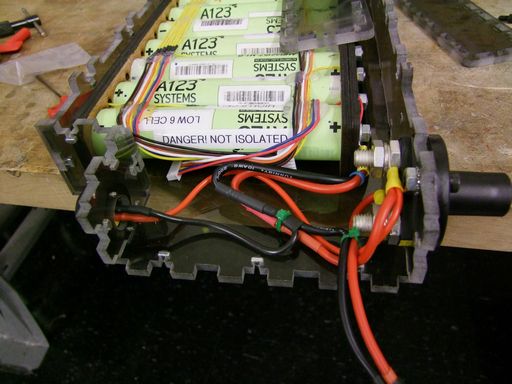 The utility wiring on this build is pretty sparse – just a jumper from the charge port to the battery side of the switch, and the switch outputs directly to controller. I didn’t even bother with a precharge circuit (inrush current limiter) this time. That’s how much I didn’t care.

(The tradeoff being earlier retirement of this Hella switch from arc erosion, and possibly risking detonating the Kelly from inrush current on ever power cycle. Don’t be like me, kids.)

And no, the batteries aren’t isolated. What this means is the pack is not made of two packs joined in series externally, so you could charge each half on one power supply if connected in parallel. This is to remind myself of the fact if I ever take this pack apart and try to charge it from two power supplies at once.

Flipping everything over now for the main installtion. The KBS48121 is bolted in, as is the battery box through its four side screws. At this point, it’s cleaning up and tying up wiring to keep out of the way of rotating assemblies.

This 80mm motor features a Hall Sensor board and mounting rig by Yours Truly. 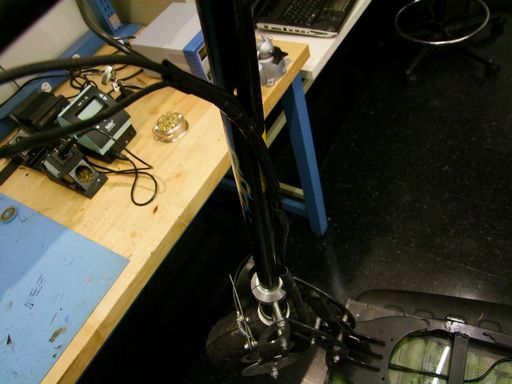 A bit hard to see here, but now I’m wiring up throttle cables and the like. I didn’t go for super clean through-the-handlebar installation like this thing came with – it would have taken too much time to thread the noodly cable through the wire channel inside. Instead, I used some spirally-loop-wire-loom-twizzler-things that I stripped from the original wiring. This at least makes it look not like shit unlike Melonscooter 1. 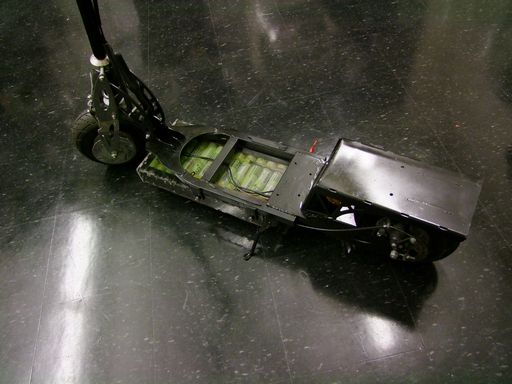 I could ride it like this, I guess. This is the state right before the first all-systems test. The throttle wire runs above the battery pack but below the main frame, in the roughly .2″ gap between the two.

To tune the Hall sensors, I followed my own page about Hall sensor tuning to the letter. It only took 2 wire swaps to get the motor to spin, then I alternated measuring current draw and bumping the sensor board a little each time (since you were not going to convince me to reach my hand into a spinning belt drive) until the current fell to something like 12 amps no-load. Still a bit high for this system, but by then the sensor board was maxed out adjusting in one direction and I did not want to play the wire game any more. 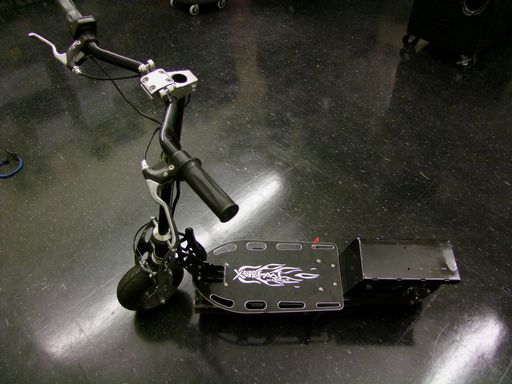 Bundled up and bolted together!

A few test spins around the IDC hallway told me that I should not be riding this thing in the IDC hallway.  First, because it launches fairly energetically, and second, because I came close to tearing off that giant Hella switch on the starboard side several times. 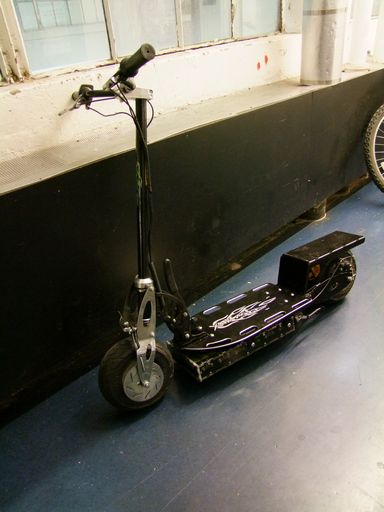 Outside MITERS after some around-the-block street runs. This thing definitely tastes like suicide again. I’ll say that Melonscooter hasn’t been this jumpy and powerful since its original R/C controller based incarnation. I have yet to have someone pace me or radar gun me to get a speed reading – maybe it’s time to break out a GPS speed application, but it’s definitely well north of the 22-23mph that the late models of Melonscooter 1 could hit.

It also rides like a old Cadillac and handles like a battleship. The giant 9″ balloon tires are even better at road damping than the 8″ tires of Melonscooter 1, and the much more solid frame design means it just sort of rolls over everything. One thing I don’t like as much about this frame is its very wide turning radius. Those big shiny front forks hit the folding joint at maybe 35 degrees of steering tilt. You’d never go this far when riding at speed, but it can barely snake its way up the wheelchair ramp entrance because the turn circle is so huge. I would place this build on the very high end of what I would accept as portable – it’s definitely big for my usual tastes, and if it were any bigger I would have trouble with bringing it inside.

The possibly suboptimal motor timing means that people heavier than me who try to ride this thing full throttle some times experiences the “Kelly Cutoff”, where the KBS controllers can’t handle the fast-RL time constant of R/C motors generating high current transients and shut down to protect themselves. I’ve also experienced this once or twice so far, but not under conditions which I can reliably duplicate.

Some times the “Kelly Cutoff” is resolvable just by turning down the maximum current command to less than its max rating; for this case, maybe 100A. If it becomes a consistent problem, I’ll try that first since the acceleration on 120A is pretty satisfactory. To put it mildly. The next level of fix would be actually spending time to nudge the sensors.

For now, I’m hopefully going to get to range test this thing once the Mysterious A123 Cells of Yore get a few cycles on them – I’ll check the balance state of the pack then. Hopefully if any of the cells are substantially weak, I can replace them before moving on.

A few days ago, while riding Melonscooter 2 down a main street in Cambridge, I passed a white van, one like many thousands of others plying the streets here, representing about every possible contracting firm, flower business, or sandwich house.

But something just didn’t look right as I passed it. I wasn’t sure what, but I got this feeling of “this van ended too soon” 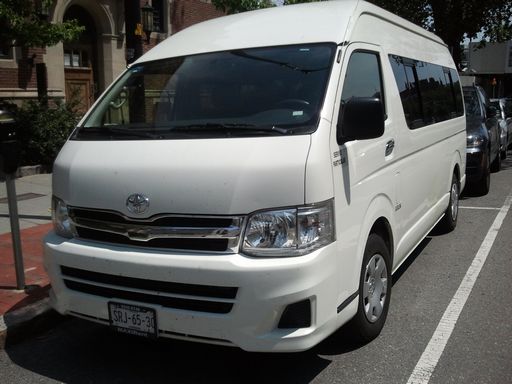 I was right. It did end too soon. Someone had brought an honest-to-goodness modern Toyota Hiace all the way up to Cambridge, which means they just saved me an entire trip to Japan just to take pictures of weird cars. 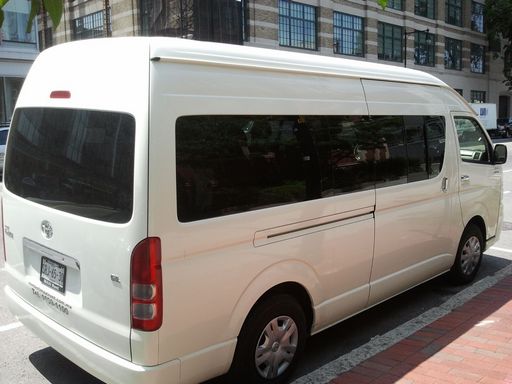 The previous generation Hiace is the type subject to all of those glowworm-porcupine-starfish-Transformer mods that I originally began being into these things for. I’m not very in resonance with the current generation styling, but they don’t look too bad with the right color scheme, kind of like driving your wireless router down the street, or at the least some sort of bagel oven. Either way – holy hell, someone brought one to what was basically my front door. Life is taunting me – just fucking taunting me.

Sadly, it looks like a rental vehicle, and from Mexico at that (which is my best shot at getting one of these that isn’t older than I am). I assume it was some visiting tour group from Mexico. Unfortunately, by the time I took this picture, their parking meter had run out, but I didn’t love it that much as to give them freebies, however. Enjoy yourselves some American parking tickets?

So what do I do when life dangles a carrot in front of me? Go get some celery and fight back. Whatever the hell that means. 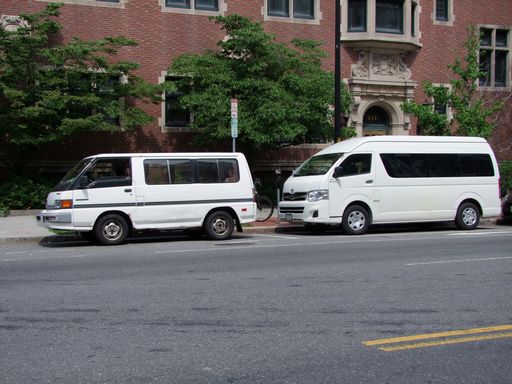 I immediately whipped Melonscooter around and fetched Mikuvan just to take this picture. Why yes, my name is Mr. Va(i)n.

Speaking of Vans Next to Things (…..tumblr.com?), here’s another spontaneous picture which may appeal to a wider audience than just me. 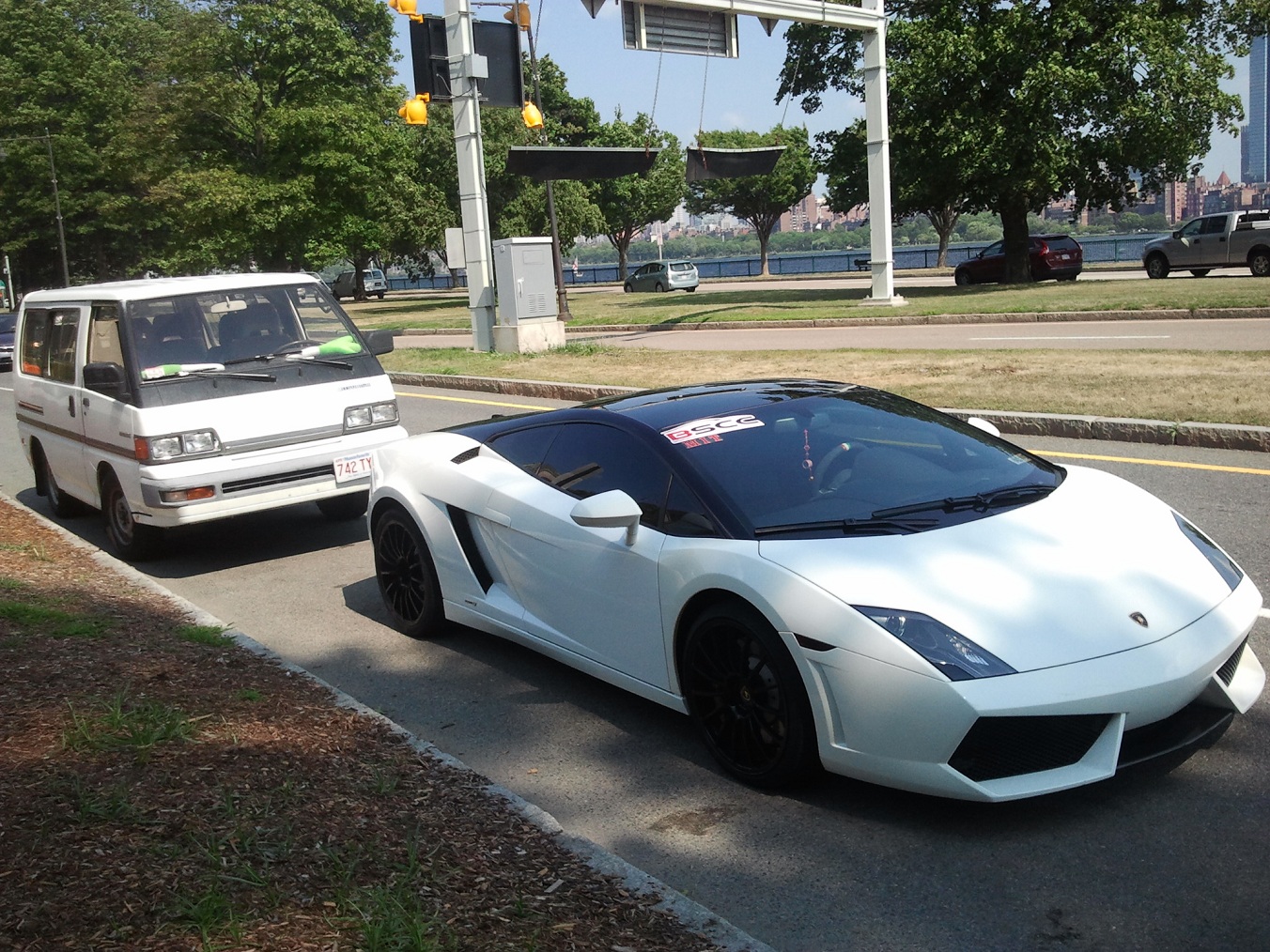 Returning from a Home Depot trip for the summer go-karts session (more on that later), I wondered who the hell was parked like an ass on the busiest throughfare in Cambridge.

Check out this three orders of magnitude span of vehicle value (Mikuvan: $800. Lamborghini Gallardo: $200,000). This is a pretty damn near Jalopnik level of “highest vehicle value contrast” here. You can’t get much lower than 3 figures in price, nor higher than 6, typically. The only way for me to beat this is to find a Bugatti Veyron.

Now, about that orange milk crate.