It’s been a little while! My entire previous week was spent preparing and organizing the big summer MIT-SUTD go-kart race which went down on Sunday. Yes, that’s a thing. The summer class is not totally over yet, so that report will come shortly.

In the mean time, I want to pay attention to something which has been a little neglected over the past month as I devoted more resources and time to making sure the class ran on schedule and people were able to finish up. That something is DERPDrive, which, given that I found one of my structural frame tubes being used as a go-kart wheel chock the other day, was pretty damn forgotten. Luckily, it’s now assembled and already through one attempt at a test fit for which I could not conjure enough macho to accomplish. It’s general knowledge that I look just as home in a Miku costume as anything else, and sheer manpower is not one of my notable traits. The test fit will be repeated once I can get a team-lift going.

Here’s what all took place. 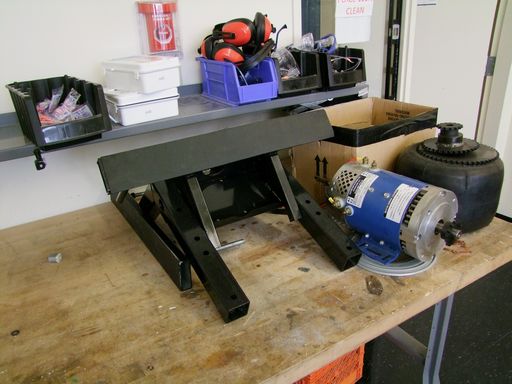 After watching the paint dry, DERPDrive was unceremoniously shuffled to one corner of the shop as the students’ build season really started kicking in. Over the course of a week or two, all kinds of mayhem landed in my parts box – from safety goggles to tools to other people’s drivetrain parts. One thing that I keep trying to instill in high-intensity overachieving engineering students is how to pick up your own droppings as you work, and how throwing all your tools from the day into the nearest bin doesn’t constitute cleaning up in the least. This occurs with varying degrees of success.

Since the primary mechanical parts of this thing had already been machined and ready weeks ago, all I needed to do was assembly. This went quickly: 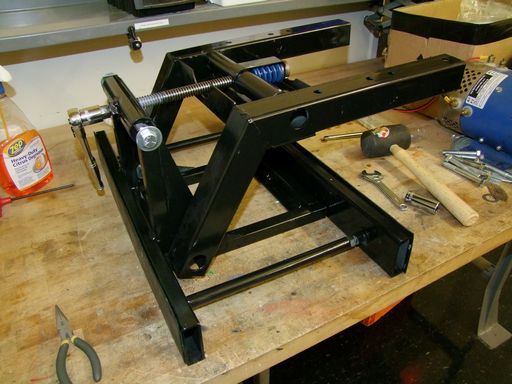 In this configuration it has already been mistaken for a motorcycle jack or some kind of pressing tool. 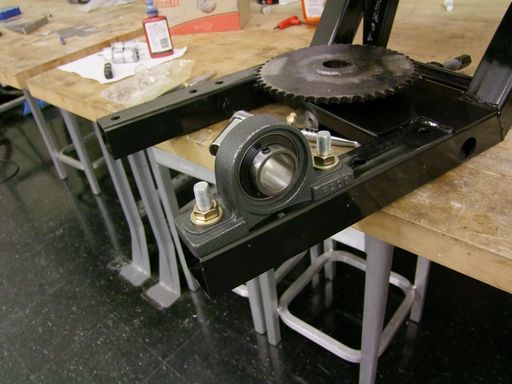 The next steps in assembly included mounting the astronomically huge bearing blocks. Into these 1.25″ bore blocks will be mounted a solid (unless I feel like saving about 2 pounds out of over 100) 1.25″ steel keyed shaft. The holes next to it are for a 3/4″ steel auxiliary shaft, and holddown method for all of them is 1/2″ fine-thread bolts and grade-mismatched-because-that’s-all-i-could-find hex nuts. These things are surprisingly cheap on the surplus market.

They’re also built for serious slop. I assume the target market is people who assemble entire production machines in a cave, with a box of scraps, because every part of them is adjustable.

The mounts are slots, so they can slide back and forth. And the bearings are captured in spherical housings, so you can have shafts that are just eyeball-aligned. So that’s how Tony Stark did it. 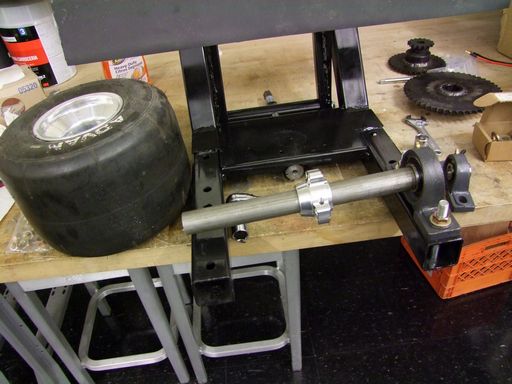 The next degree of freedom to adjust is centering the 11″ go-kart wheel and hub in the center of the swingarms. I mounted the wheel on the hub and eyeball-aligned it, then clamped the hub in place. When the wheel is mounted, I can’t reach the keyway clamping screw , so this adjustment needs to be done beforehand. Normally, these hubs are used on the very end of an axle, not in the middle. 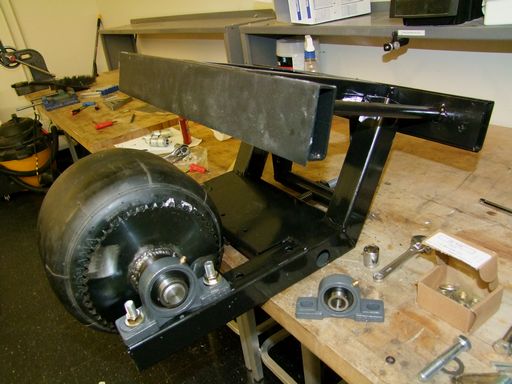 The Big Axle assembled. Notice the overlay on top of the frame jacks – this is 1/16″ 80A neoprene rubber glued to the steel. A thin compliant layer ought to increase the amount of friction generated by the jacking force. That’s the intention anyway – I don’t think I will have “detaching issues” when the wheel is down with a few hundred pounds on it. 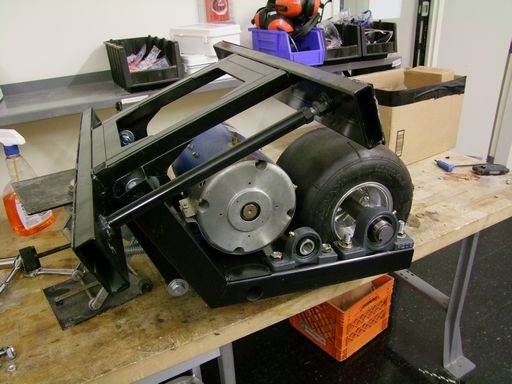 Now this thing is getting scary. The 52 pound D&D sepex motor is now mounted, and I’m really, really having trouble wrestling this thing around on the bench. It is just now dawning on me that this might be a little more hardcöre than necessary.

But just think of how awesome of a go-kart it had already made! This motor has had an interesting MIT tenure for sure. 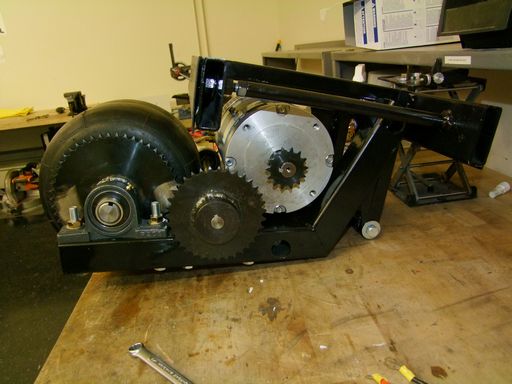 The midshaft is now mounted. The little sprocket for the final stage is behind the larger one in the front. Between the two stages, the total gear ratio is 8.66:1, which should yield a top speed of about 15 miles per hour (for a certain high field current of the motor – field weakening, a feature available in the Alltrax controller I’ll be using, will produce an artificially high top speed if acticated).

While the motor is capable of much more power to push the vehicle faster, recall that I’m gearing for a high enough thrust force to get the van out of my parking garage, not to do really awkward silent cruises in front of local night clubs while implying that I have something which hangs down really low. 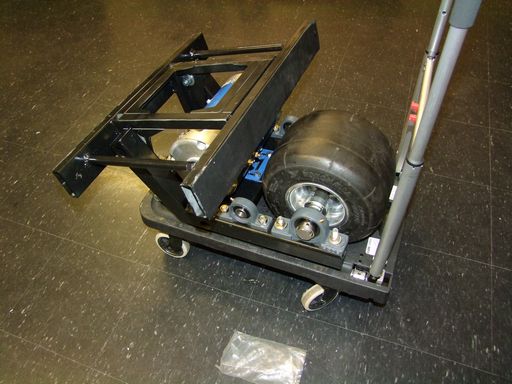 This whole rig now weighs north of 110 pounds, and getting it down from the bench was probably one of the most precarious situations I’ve found myself in.

It’s time for a test fit… 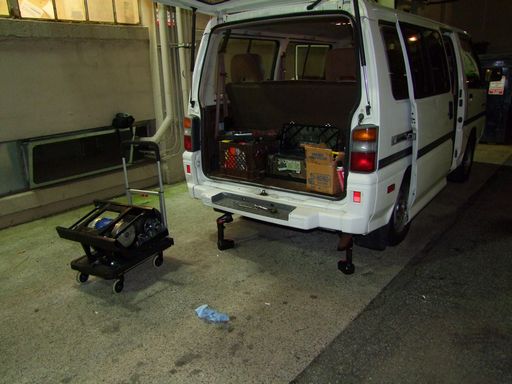 The crime scene. The plan was to back DERPDrive, facing the right direction, under the two frame rails it will squeeze between, and then hold it in position while I tighten the jack screws. 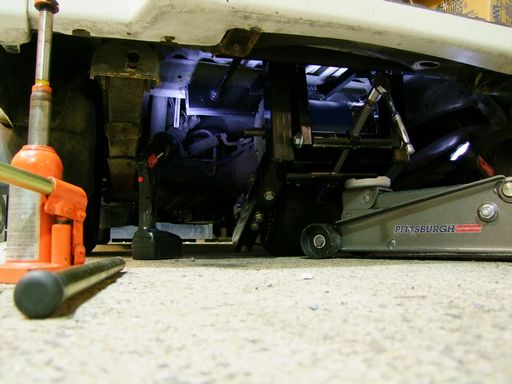 Alright, I definitely didn’t think this through very hard. Minus the jacks, that’s roughly what the assembly’s going to look like once installed. I accidentally found out that my spring preloading setup works really well when I trapped the swingarm against a jack and was still trying to lower the whole thing.

After a multitude of jacks and bottle pistons and failed attempts at bench pressing the thing up to where it needs to go, I decided to give up before dropping the entire van on myself. This is gonna be a 3-hoodrat effort at the least, and I might need to fiddle my way back onto the lift. I got it almost there – but the whole “hold this thing with one arm while trying to reach the jack screws” thing was just not happening at all. This will certainly be troublesome in the future when I have to deal with 1000lbs of batteries and 200 pounds of Siemens motors. Now we know why I build little things most of the time… 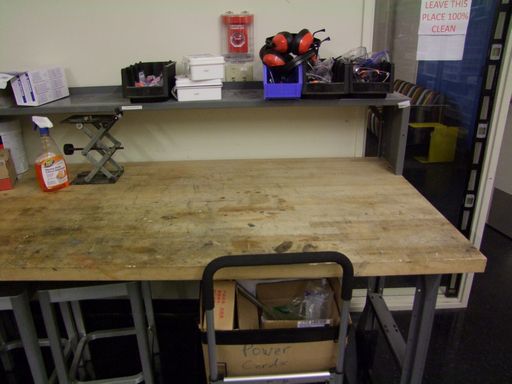 What’s nice, though, is finally getting off the bench. Can you tell which half of this bench I parked one of my project heaps on for a month?

More DERPDrive will come after I secure a test fit!

I’m not sure I could call this section beyond unboxing, since there wasn’t much to unbox, so let’s roll with slightly past unboxing then?

It’s August, and there is exactly 1 thing I do in August and that is robots. I need to get my fleet gear for Dragon*Con, which is basically in three weeks including travel time. Yep, I’m in that situation again.

Here’s the situation. Überclocker desperately needs a new top clamp arm actuator since the previous one was so damaged at Motorama (see the bottom of the event recap). The leadscrew got pretty chewed up since it was the first thing to hit an opponent that really sunk deep into the fork, so it would bind at the top of travel. And it had more than enough bottom travel, letting the top clamp actually poke out under the fork, which was just unnecessary. Plus, the oddball chain drive I designed is only getting worse tension-wise, and it really has to go.

I wanted to rebuild the clamp actuator using a stock gearbox (so I can have multiple on standby) and not using those damned chains. It should be much lighter than the current half-a-drill setup I got going on, and not nearly as powerful, because there’s no reason to need a full 550 motor on grabby duty. 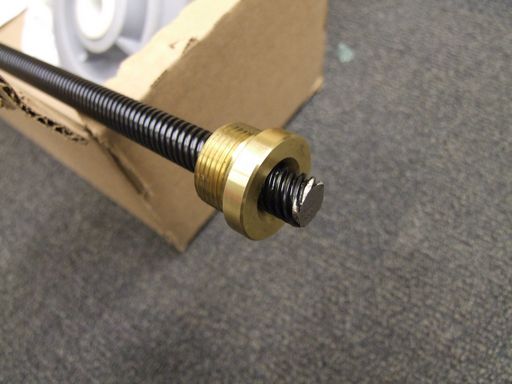 I took recommendations for reasonably nice gearbox, and one of the candidates (recommended by Jamisong) was the IG series from Super Droid Robots. I’ve seen these before, and had been eyeing them for a while, but never had a reason to buy one since I’d been well-pampered by chopping power tool motors. They seemed like a nice compact solution that I could merge with a 400-class motor for less weight.

So I ordered three for kicks, adhering to my 2n+1 Rule of Procurement for Stuff I Can Afford.  One for using, one for backup, and one for fucking around with! 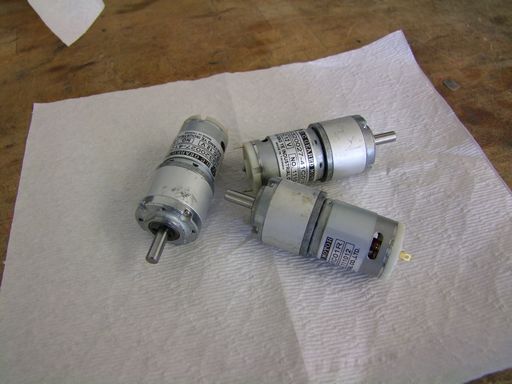 Here they are! Cute little setups, really. The RS-380 class motor it comes with is quite possibly the mildest wound motor I’ve ever ran. The gearbox itself is constructed from a few die cast aluminum parts, and the ring gear is steel with an aluminum over-sleeve-wrap-thing. 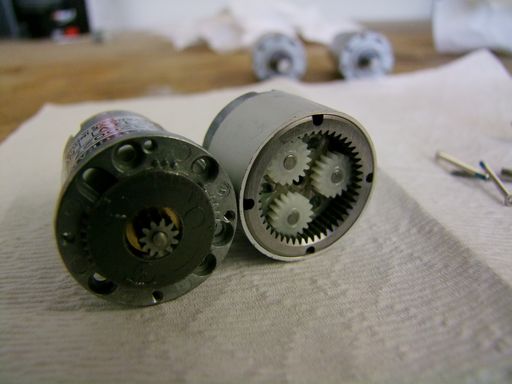 …but that’s all I have to say that’s productive and nice.

What is with you people and plastic gears?

The first stage is plastic! Ostensibly it’s for ‘noise reduction’, but all I see is cost cutting. I will gladly pay like $5 more for some metal in there.

Well there goes any potential of overdriving the motor significantly, or replacing it. 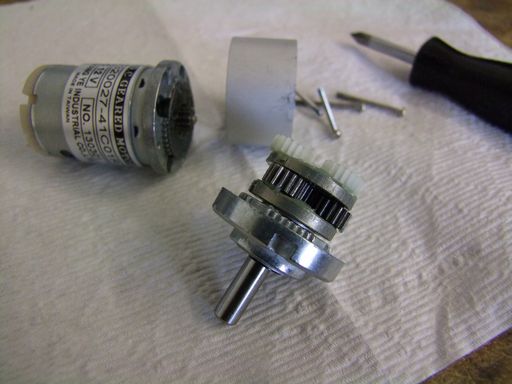 The difference in gear strength is incredible. So you go from 2.5mm thick plastic gears to 5mm thick steel. That’s way, way more of a torque increase than the plastic can handle. If those 2.5mm gears were steel, too? Certainly, then the progression of torque makes sense. But this is just cost cutting, one that happens in enough gearboxes today to piss me off.

So for $20, I’m not going to argue at all with what you get – I’m sure these things work for exactly what they were designed for. But damn, I’m not going to put up with this for actual robot use. Glad I got three – because my intention for the bot is to combined two of the gearboxes into one that has all-steel gears. The untouched one can be for emergency backup or something where I know I’ll have to go extra sissy on the throttle.

Next up on the list is something interesting I found on TNCscooters while I was putting together a weekly student group order list. 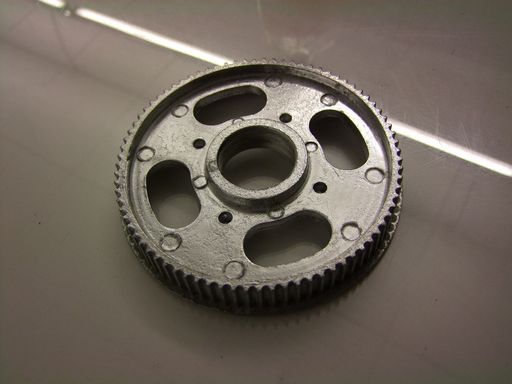 It’s a big timing pulley! Specifically, it’s a 5mm HTD pulley, 80 teeth, that has a center thread which mates with most threaded scooter hubs. These seem to come in three sizes.

Even though the material looks like very crudely cast aluminum, this is still good to see existing because typically, you can’t find HTD drive pulleys in very large sizes from industrial suppliers. At least not in a form which could mate to a purchased wheel in this sector of industry. 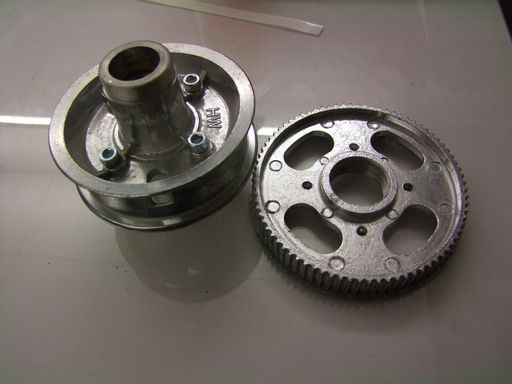 Here’s an example of the kind of rim you can thread these pulleys onto. The thing on the left is a typical 8×2 tire rim (example 1, example 2). For non-regenerative vehicles (which do not perform motor braking), you’d probably want a strip of teflon tape or other anti-seize tape on the threads, lest over time these two things become one piece of metal. For regen vehicles, there’s not much choice but to use some light threadlocking adhesive to prevent the pulley from unthreading upon motor braking.

If you aren’t inclined to use the cheesy cast aluminum thread, then those four little hole pilots in the center near the raised hub is the exact same spacing as the four lug nuts on said rims! So, you could do it standoff style by drilling through the pilot holes and bolting it directly to the rim. 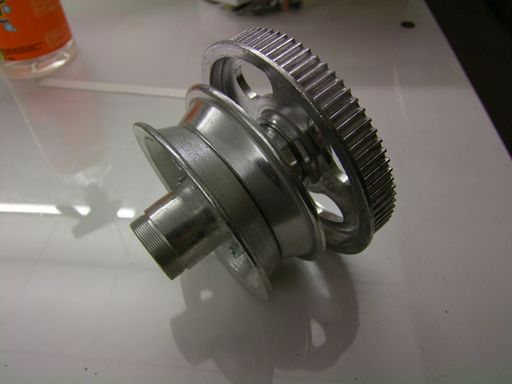 This is a typical arrangement of the two parts. On the left side thread, you’d mount a band brake rim or brake disc adapter or similar.  This ought to help those who want a synchronous belt drive like melonscooter but have found that commercial HTD pulleys are a pain to interface to without machine tools.

So concludes another episode of Slightly Past Unboxing! Coming up next are a full report of this summer’s go-kart shenanigans, and a catch-up of what I’ve already been doing with the robots in preparation for Dragon*Con.

3 thoughts on “DERPDrive: The Assembly; Plus, Some Other Neat Parts: IG32 Gearmotors and Scooter Pulleys”