Continuing on the DERPDrive after a quick melon break, here’s what all happened to get DERPDrive to an almost ready-to-install (mechanical) state. Bear in mind that at this point, the thing’s been sitting on a handtruck for a week and a half, waiting for the weather to stop being incredibly humid and spontaneously rainy so I can go outside and sandblast and paint the whole thing. I got a little wimpy sandblasting gun from Harbor Freight the other day, so I can move to finishing it (and test fitting!) as soon as the weather window opens up.

Last time, the pile of parts was reaching critical mass, just waiting for a day when I can hide in the shop to put it all together. It coincided well with the welding work on Melonscooter2, so there will be an update on that soon too. 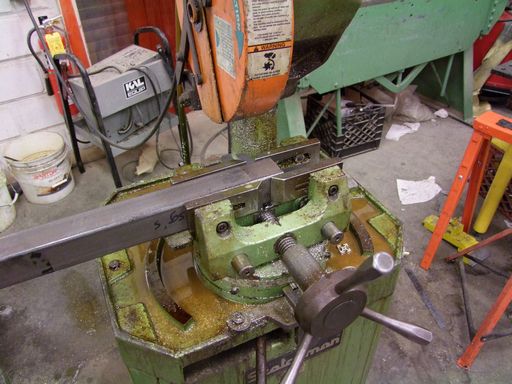 Step 1 was to section the large tubing sections into the proper lengths. To do that, I meandered down to the FSAE & Solar Car & Mexican Grill shop and used the 10″ coldsaw. This saw is on-and-off maintaned, and luckily it’s currently in an “on” period where the blade actually has teeth. Get a load of the color of that coolant! Machine coolant, especially the new vegetable-based biodegradable stuff, actually spoils pretty fast if left unused and unchilled. I was told it was changed “like a few months ago, I think”.

Whatever, it was still oily and didn’t smell like the local greasy Thai food place, so it ought to do something. 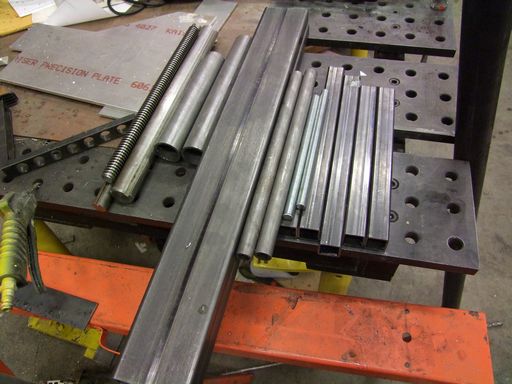 Tubing and rod stock sectioned to length and ready for the next step, drilling. 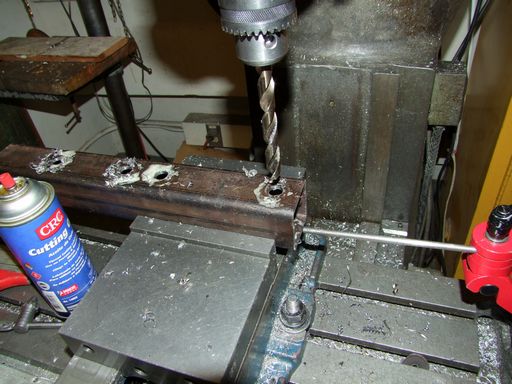 I designed this assembly to be thrown together quickly from square tubing with holes drilled in it, so there’s no fancy fishmouthing or angled round tubemancing here. Fine positioning was accomplished on the venerable MITERS Bridgeport. 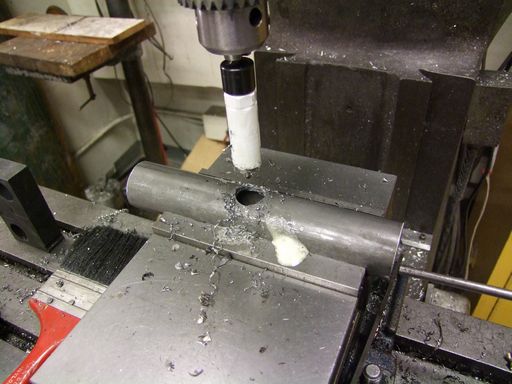 I bought the two sizes of hole saw I’d need to cut the larger holes. These Home Depot class hole saws are really designed for wood only, and these few holes completely destroyed them. That “Bimetal” must be “horseshit” and “pot castings”. 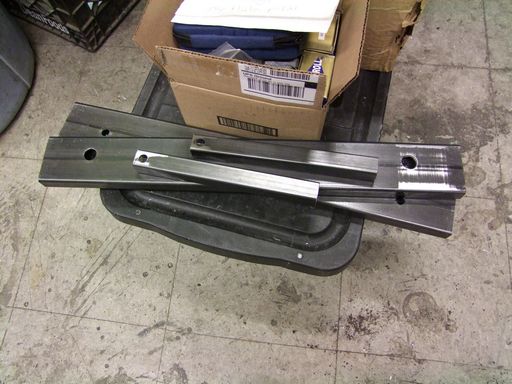 Drilled, sanded, and deburred. There’s only one thing left to do… 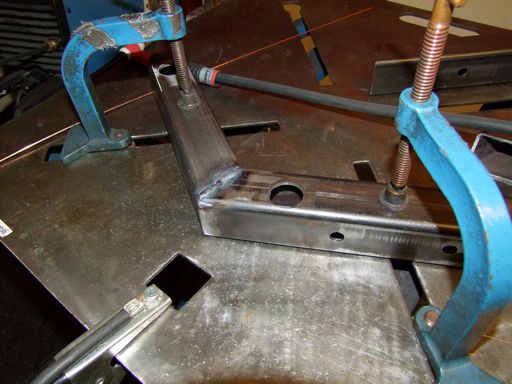 Time to join metal. This post should really be entitled “How to work in 4 shops at once”, because that’s what happened. No one space I was working in had the right combination of everything to do all the jobs needed. Up in the IDC, I really have no heavy equipment at all, but a universe of hand tools and a laser cutter, so I can do the assembly work. In MITERS, there’s everything but welding and sheet metal equipment, and the hand tools are in ass condition. And finally in the FSAE/Solar Car/Pastries shop, there’s welding, big machines, and sheet metal tools, but everything’s just barely maintained and there are no welding jigging and setup tools anywhere.

That’s one thing which buggers me about MIT shopdom in general – everyone would rather have their own spheres of influence and fiefdoms than one well-manned, well-equipped place.

Anyways, here I am invading the D-Lab where they have a very high end welding setup with actual clamps and whatnot, for rigging creations using very high end third-world bicycle frames.

I began with the TIG to join the swingarm sections together. This went well enough – I would actually show my product in public in front of people who, like, know how to weld. But there was one thing which kept me from finishing the job with TIG – it wasn’t fast and dirty enough. Yeah, sure, TIG can let me weld an aluminum can onto a fairy-sized airliner… 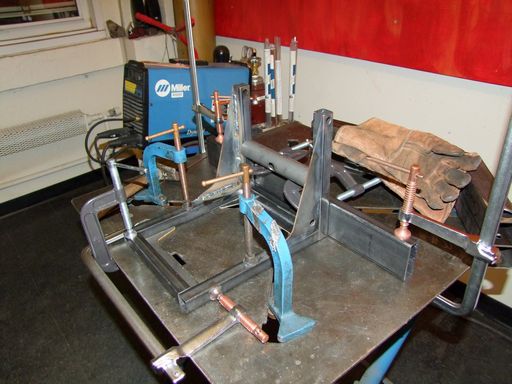 …but for something like this where I’m beasting into thick walled steel tubes with no real need for pretty or even incredibly strength, the ability to draw a huge loogie of metal in 10 seconds and be done with it was far more appealing. The MIG welder in the space was much, much larger than the little dinky one that was in MITERS, and the feel was a world of difference. This translated to some very nice looking loogies.

Above is my setup to put the frame tubes together after having finished the swingarm. I used almost all the available clamps for maximum rigidity in trying to prevent warping. Overall, everything came out pretty square. 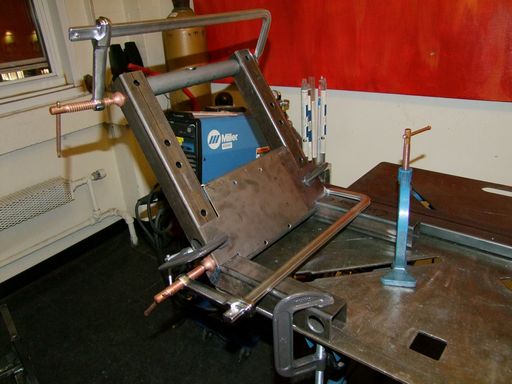 Next up was attaching the motor mounting plate to the swingarm. This was once again a dance of clamps, using the trunion tube and the folded flanges of the 12 gauge sheet (the same sheet that Melonscooter’s bits came from!) as fixturing spacers. 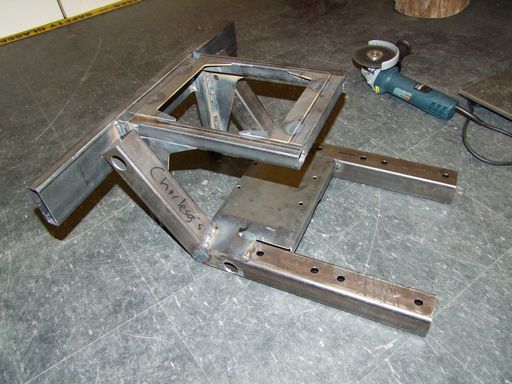 Here’s a mockup of the assembly after the major welds were done. 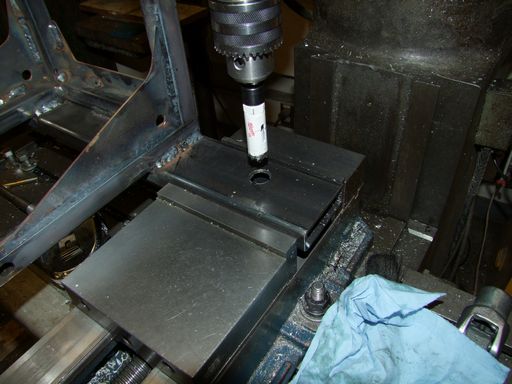 During this mockup, I discovered that I welded on the back rail completely backwards. Like, utterly backwards. Both upside-down *and* facing the wrong way. Phenomenal.

A trip back to the mill to grind through the remains of my 3/4″ hole saw, which by this point was cutting more like .800″ polygons of constant width, solved this.

With the frame done, it was time to finish the things which attached to it. To make the leadscrew nut trunion assembly, I took the 3/4″ Acme hex nut from Surplus Center and machined it down to 1 1/8″ OD most of the way, then stuffed it into the hole. 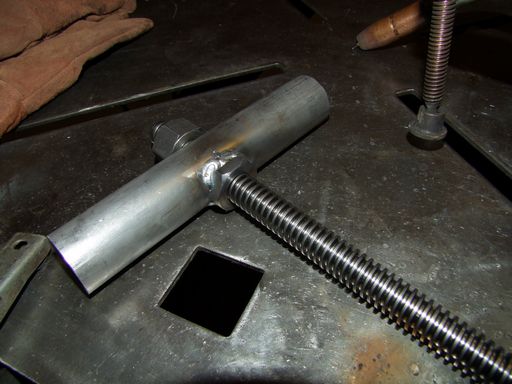 The nut was then welded in place. This joint is of questionable metallurgy, since the nuts are made of 12L14 steel. 12L14 is well known in machinist circles for parts that need to 1. sink and 2. be magnetic – it’s not very strong, and the (very trace) lead content technically makes it impossible to weld because it forms big globules and makes the weld porous. However, opinions seem to differ – some say it can be welded just fine if the material is preheated (which I did with a propane torch for the additional reason of the section thicknesses being very different), others say it cracks and destroys itself immediately.

It seemed to go down just fine with preheating. I wouldn’t, say, put it in space or something, but no matter how starship-like Mikuvan looks, it should, unless the circumstances were most unusual, stay firmly planted to the ground. 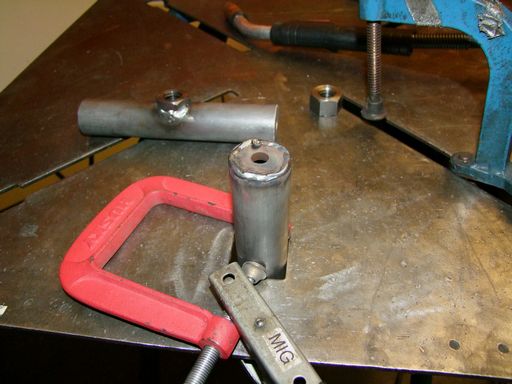 To attach the endcaps, which are 1/4″ waterjet-cut donuts, I just MIG welded a huge bead around the perimeter… 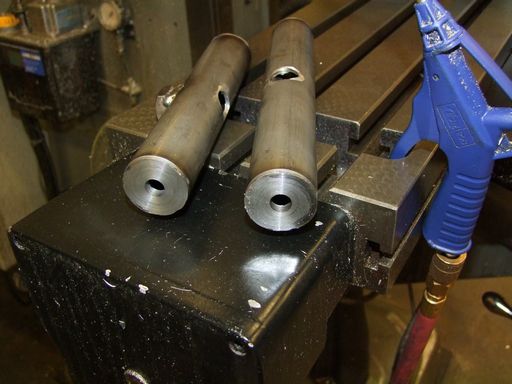 …and finish-machined it on the 19″ LeBlond, the only machine with a chuck big enough to swallow the protruding Acme nut.

With the trunions complete, I next turned to the jack, the floating half of the frame which would be pushing against the van ladder frame. 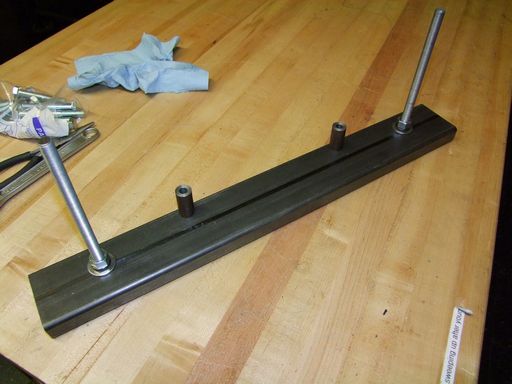 This thing is made of a few chunks of threaded rods and 2 standoffs, which I machined in the same session as the trunion endcaps. The standoffs shown are actually made from chunks of leftover 3/4″ shafting from the same order. They serve to align the jack in the stationary frame. The long threaded rods to either side are what will be providing the force. 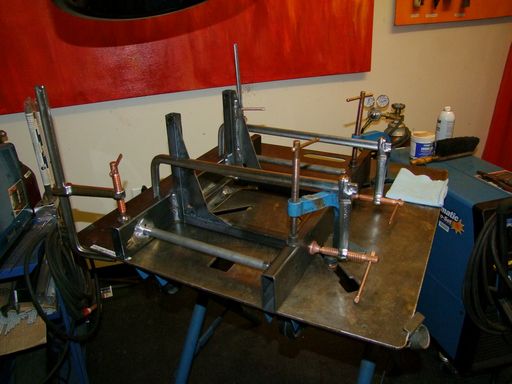 The other part of the jack is made from some plain steel tubes that the threaded rods insert into. Aligning this whole setup for welding was therefore simple: put it together like it’s supposed to go, then weld it. The base of the tubing was welded from both the outside and inside of the frame, since by welding the back rail incorrectly the first time and being forced to redrill, I’ve opened up a way to get at it from the other side. Strength and concentration-of-stresswise, this is probably for the better. 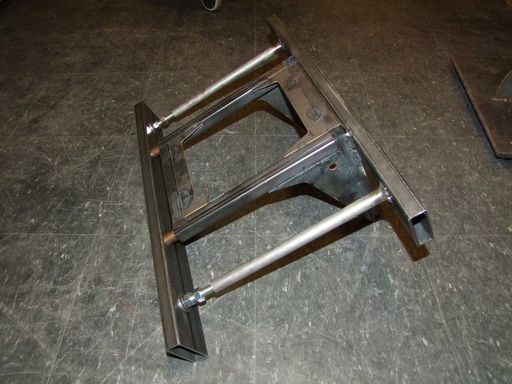 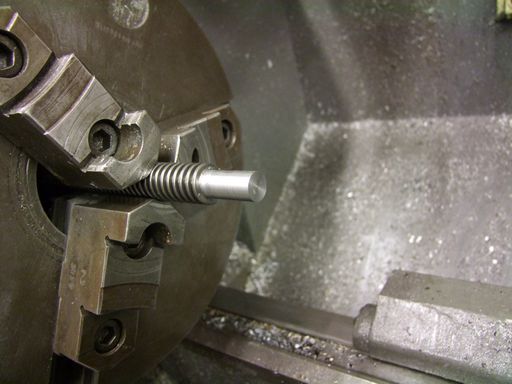 Moving on, the last link in the system – literally, since the frame is one and the swingarm another – is the leadscrew. I needed to put a hex or other drivable shape on the end of the leadscrew so I can crank on it with a power drill or ratchet to raise and lower the assembly (automatic electronic raise and lower would have been funny, but overboard and unnecessary). To start, I machined the leadscrew down to something which was fully round. 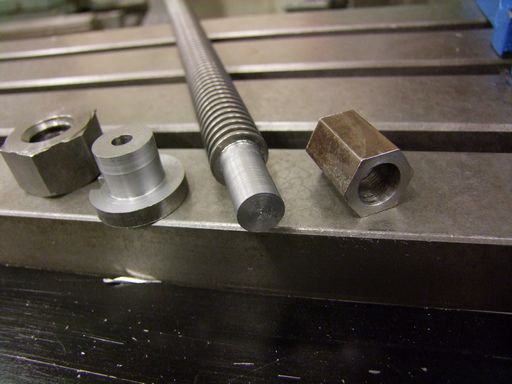 Other machined parts include that chunk of 3/4″ steel hex which will be the driving end, and the preload spring retainer on the left, made from a leftover chunk of 1.25″ shafting. 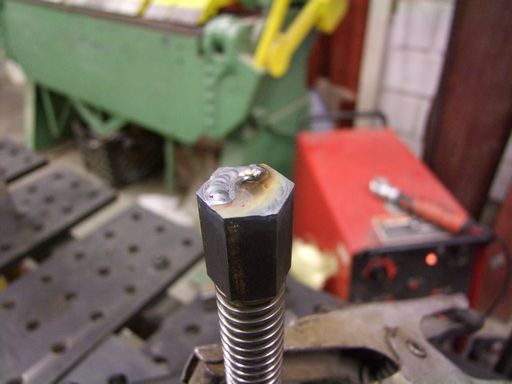 I began by welding the hex onto the end of the leadscrew. For this precision operation, I went back to TIG. 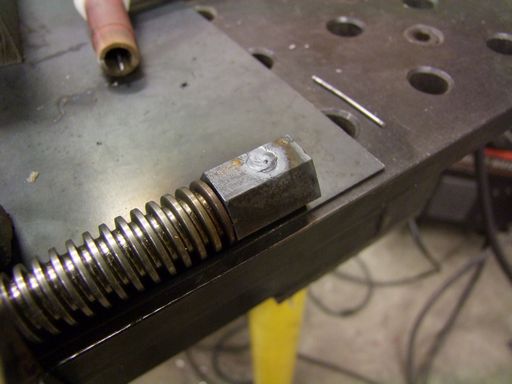 Next, I threw this on a drill press and drilled a few shallow radial holes. Then the holes were filled with plug welds to fuse the material together in those spots like inserted pins would do the same. 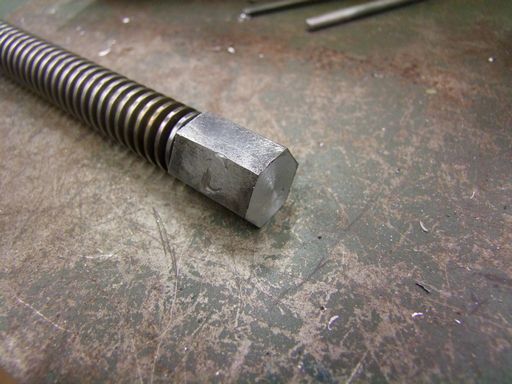 The excess weld plug was ground off and the end of the screw machined for prettyiness and consistency. I might have overdone it on the plug welding a little, judging by the deformed hex, but it still fits a deep 3/4″ socket easily. 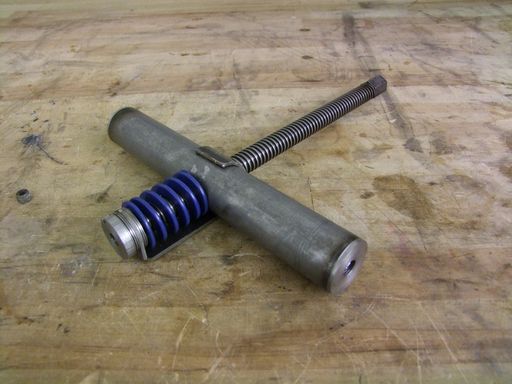 Here is the finished leadscrew assembly. The J shaped piece is responsible for lifting the assembly back up. In case it’s still hard to see, imagine the tube fixed and the leadscrew being slowly pulled back away from the camera. The spring would compress and cause the hook of the J piece to move along with the leadscrew. This compression is what forces the 5th wheel into the ground to give it traction.

To lift the assembly back up, the leadscrew is cranked back towards the camera, the spring relaxes, and then the force is transmitted into the J piece which now hooks the tube from behind. Because the swingarm is only going to weigh about 75 pounds, the return mechanism doesn’t have to be as hardcore.

The J was made first by bending in discrete “facets” on the big sheet metal brake, then heating it up with a torch and beating it over the tube until it was a little rounder. Recalling the CAD model, it has a big slot where a round hole to pass the screw would otherwise be, since “beat on with hammer” is not considered a precision operation by me at this time (but wait until I start doing bodywork…)

The observant will notice the tiny thrust bearings (by tiny I mean 3/4″ bore) which provide for free movement of the leadscrew relatively to The J while still transmitting force into it. The whole sandwich is retained by a giant E-clip, which can’t be seen from this angle.

Next chapter: Sanding and painting this thing in a fashion which would reflect what I need to do to properly repair the body rust after patching it. That’s why I’m even taking steps at all to make this thing not a rust ball on its own – I figure if one little chunk of the project would help me practice for others, so much the better.  The same sort of thing has to happen on Melonscooter’s frame too.

One thought on “DERPDrive: Structural Fabrication”