The unsung hero of my vehicle fleet, it’s the one that actually works most of the time and which putzes me back and forth day to day. It’s a mish-mash of unmatched parts and on-the-spot engineering built on top of a scrapped commercial scooter frame, which has been operational with only a few small service gaps since 2010. Like any vehicle that is more tool than project, it’s also been slowly backsliding partswise as things wear out and I replace it with whatever the hell I happened to have within arm’s reach. For instance, this past few months has seen it devolve from the melon (C80 motor) to an SK3 59mm motor as I realized the bearings on the Melon were slowly becoming powder: 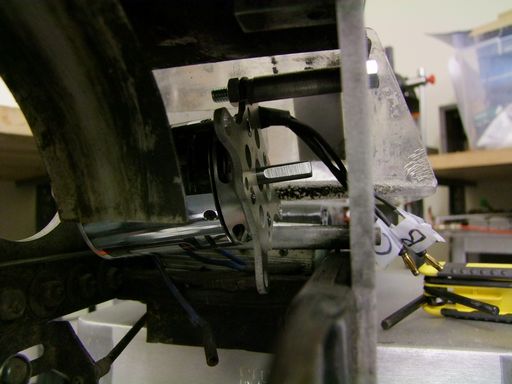 Then, one day in February while pushing through leftover snow, the timing belt disintegrated again – Melonscooter has never seen very good belt life due to me using the HTD belts at way above their safe rated power – and this time I had no spares. So naturally, I devolve even further to chain drive: 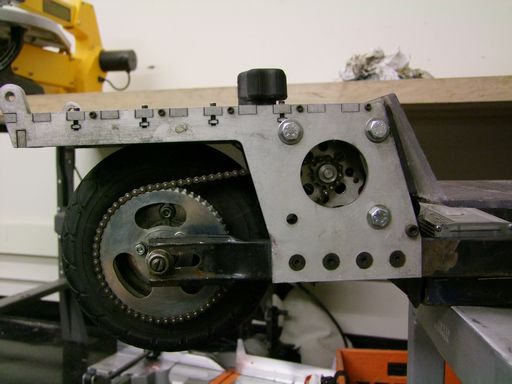 The wheel and chain were spare items purchased for that term’s 2.00gokart class.

About the same time, the front of the frame near the steering neck broke a weld and developed a crack. I rode it like this for a while, being extra careful to not put too much load on the joint, and eventually welded it back.

Sadly, Melonscooter finally succumbed to a combination of poor Chinese metallurgy, years of New England road salt, and probably my welding. One day in May, I thought the ride was getting a bit jiggly for some reason. As I pulled onto a sidewalk to investigate, this happened: 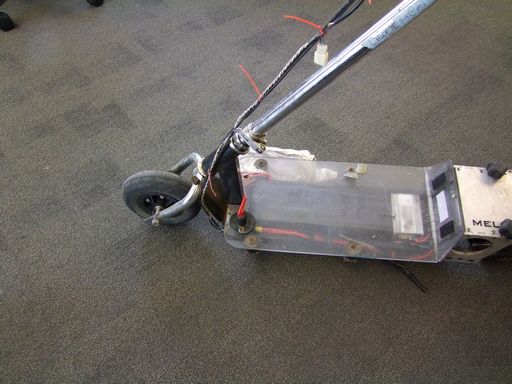 Well then. This isn’t very productive.

I’ve been swearing to rebuild Melonscooter on and off for the past year or more, but like a certain other somewhat rusty vehicle is now, it’s just continued working. The entire joint area appeared to have rusted out – I didn’t see it only because it was well covered in paint. The failure propagated clearly from a crack (though not through where I welded).

By this point, the top plate was also cracking from sun exposure, the headset bearings had lost their cages and shields, and I already had another giant hole in the battery box (from going over some sidewalk too excitedly a long time ago) which was becoming its own rust problem.

So I took this as a sign that I needed to move on. While 2.00gokart was wrapping up, I haunted the ever-powerful Craigslist for a cheap donor scooter, electric or otherwise. A week later, I found this thing: 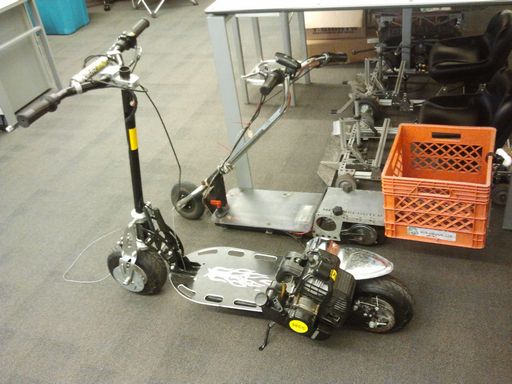 What is it?! A blurry dark picture in someone’s garage and the tagline “scooter $50” or something to that effect led me, on one of the very first long-distance Mikuvan missions, to this thing. It’s an “X-treme XG-505“, which demonstrates that convoluted alphanumeric naming is not exclusive to the domain of motorcycle manufacturers. Either way, it’s beefy as hell – the steering neck joint on this thing will clearly never fail in the same way. The giant deck is solid 3/16″ aluminum, and the frame is 1/8″ steel plates and what looks like .075 wall steel tubing. It also has dual disk brakes.

Basically, a great (if huge) candidate for chopping up. It was also not running, with engine trouble.

This sounded entirely too familiar, so at the risk of betraying my electric brotherhood, I immediately began tearing the engine off and stripping the frame, readying it for electrification appraisal. 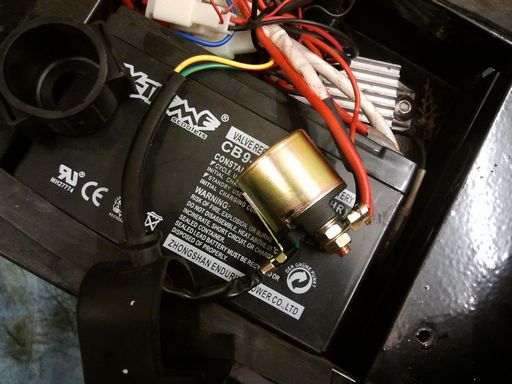 While tearing down the electrical system consisting of a starter battery and related circuitry, I discovered the world that is scooter starting solenoids. They’re basically miniature contactors (slash high current relays), and could be useful if you need something between a 30-40A automotive relay and a 300+A full size contactor. 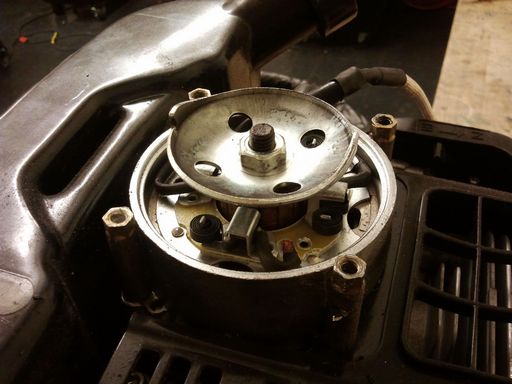 Starting solenoid also means electric start. What I also found is that the 49-50cc engine kingdom can be found with electric starts that are pretty damn cool – 4 brushed, neodymium magnets, basically like tiny Ampflows. The downside is they are often shaftless, being designed to mate to the engine crankshaft.

Still, I do want to mess with these and see what they’re capable of.  I was going to tear this engine down further to extract the electric start, but someone else already called dibs on it so I didn’t want to leave it permanently disfigured.

If you want to mess with these parts, I’ve basically found then using combinations of search terms like “49cc 50cc electric start” or “49cc 50cc solenoid” or similar. 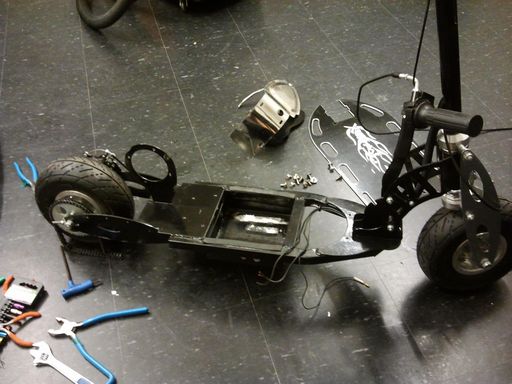 The teardown continues! Did I mention this thing is enormous? The wheelbase is a good 4 or 5 inches longer than melonscooter, which is already pretty long to begin with. If I want it to fit in the same places as before, I’ll need to do some creative basket mounting. I am, of course, designing a basket into this one from the very start. 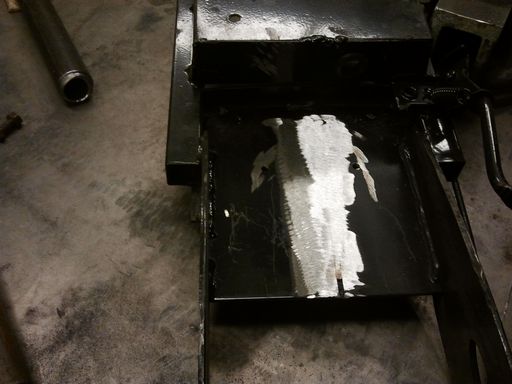 The last thing to do before I could crack my CAD knuckles was to remove the engine mount. This was done with some selective angle grinding. The engine mount actually stuck through on both sides of the deck’s rear portion; the part on the bottom I couldn’t reach with a cutting wheel, so I literally had to grind the entire thing down to flat – as the result photo shows.

With the ugly metal pectoral fin gone, I began to size up the new “stern deck”, characteristic of Melonscooter, that would also mount the motor and be a splash guard and milk crate holder. The frame’s rear forks are just vertical 1/8″ steel plates with a flat plate in between, but it was very much the wrong width to reuse the old aluminum one from Melonscooter.

While it would have been simple enough to remake the aluminum deck in the correct width, I decided to make a bent sheet metal housing instead. I figured as long as I was most likely going to need to make sheet metal structures for a certain future electric derpy van (temporary or otherwise), I should get some practice. Fast forward to after I was completely done with being occupied by 2.00gokart: 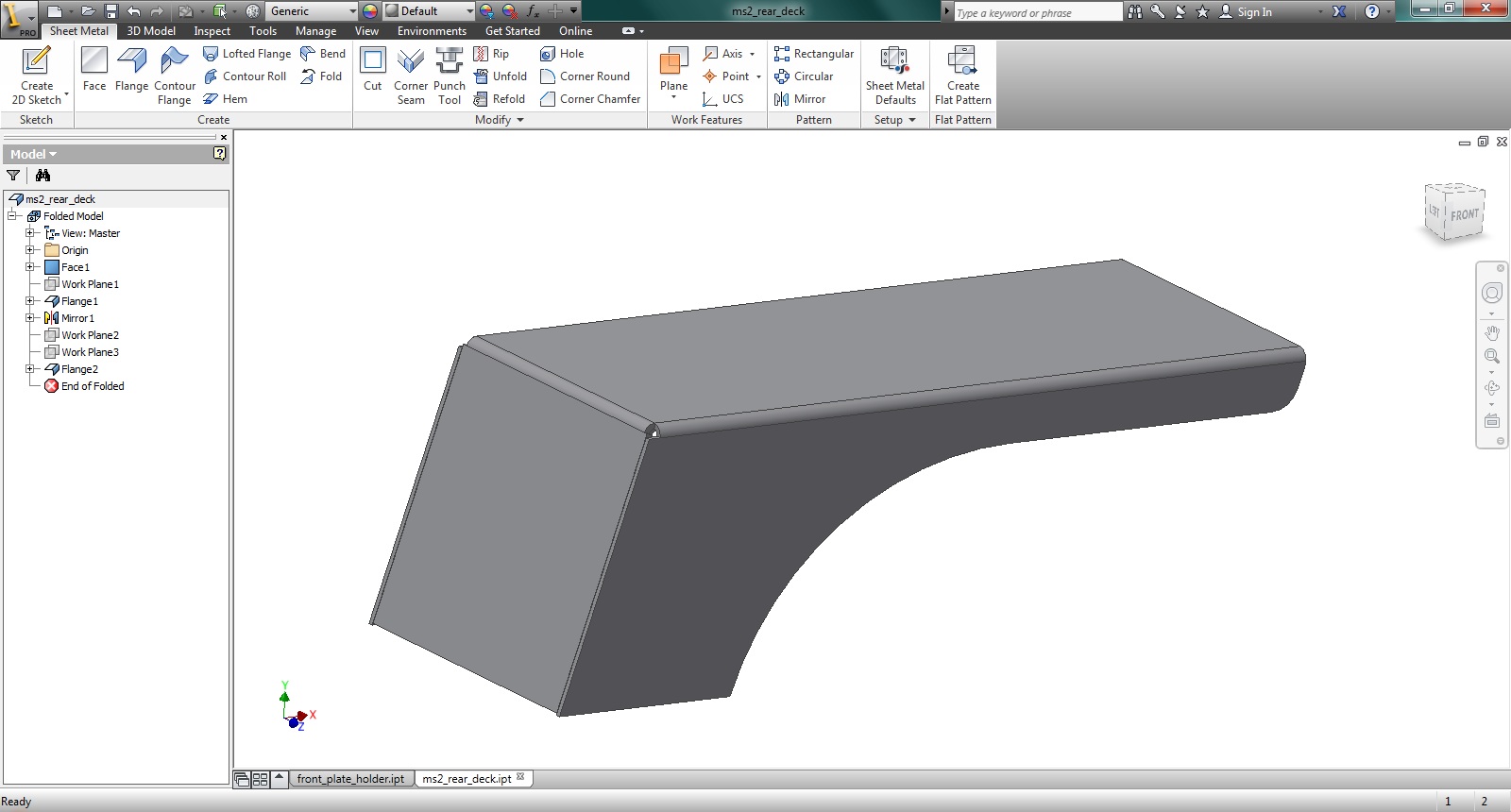 I hopped into the Inventor sheet metal mini-game and, using some crude measurements made with a tape measure and straightedges, whipped up this protoform stern deck. Now, when I say sheet metal, I actually meant 12 gauge (0.1″) steel.  Yes, this is some serious sheet metal. It is, however, the same thickness as the rest of the plate steel on this frame, there’s no additional frame that will be on the underside (e.g. it’s entirely structural), and there could be a few dozen pounds bouncing in a milk crate suspended off the back sooner or layer, so it not only had to be structural to mount the motor, but also rigid in bending as a result.

I think I could have gotten away with 16 gauge (roughly .060), but my intuition is calibrated to working with aluminum and I sure as hell wasn’t going to put 1/16″ aluminum in this application. . The other reason was that I could easily mock this up with some 0.1″ thick paperboard stock I also had. This was someone’s laser cutter feedstock, but they left an entire 3 x 2 foot panel of the stuff in the lab.

So using my crude measurement model, I made a paper version and tried it on the frame: 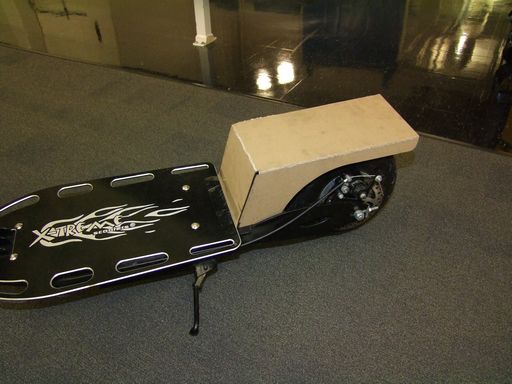 This crude-model-to-cheesy-prototype stage showed me what dimensions were sane, what needed a little bit of changing, and what was totally off base. It turned out the major dimensions were reasonable, so I only had to adjust here and there for looks and clearances. 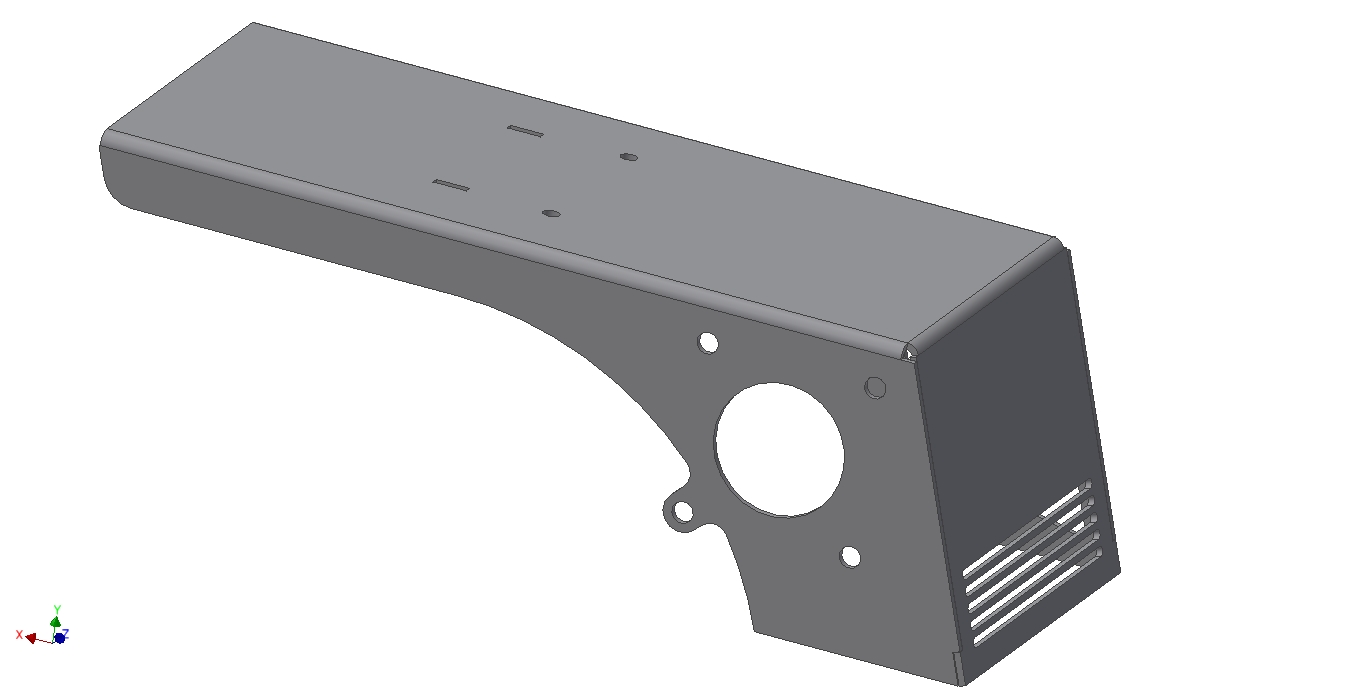 Back to the CAD world to add mounting features for the motor. The two holes up top are for an eventual basket clamp I have in mind. Those ventilation grates will make sure some airflow is directed over the motor, so it’s not just spinning inside a hollow box.

This little piece adds some more rigidity to the very rear of the deck and also functions as the other component of my eventual basket lock.

Adding some lightening to the other side of the deck which doesn’t need to hold the motor. All of this will be waterjet cut, bent into shape, and then welded. 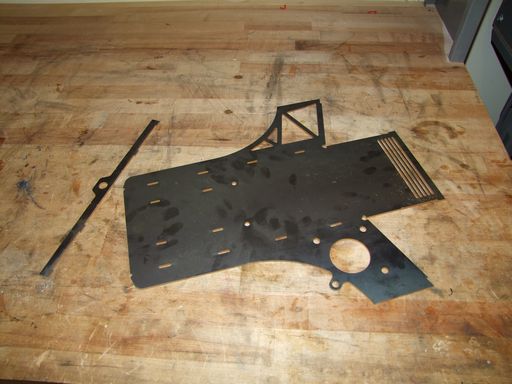 Like so. Notice the additional slots and edge nibbles that are on the folding edges. Inventor automatically “unfolds” the metal to a 2D cuttable form for me, but I wanted an easier time bending the steel, so I added the slots right on the edge of where the bend is supposed to start to “encourage” the metal there. The triangular nibbles tell me to align them exactly with the teeth of the bending brake. 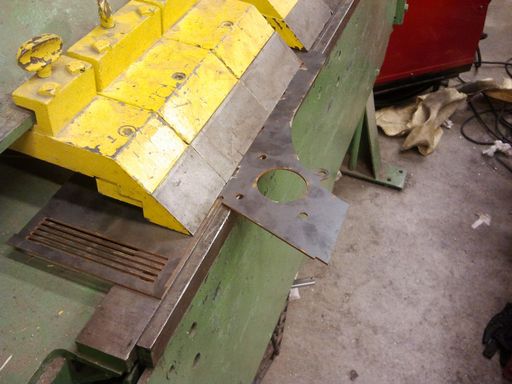 I used the Giant Brake of Certain Tibial Fracturing in the FSAE/Solar Car machine shop to push this metal around. The machine is pretty clapped out and uneven, so I stuck to one side as best as possible. If I find myself needing more intense sheet metal fab, I might take a stab at repairing this thing too. For now, push-lever-metal-go-bendy is enough. 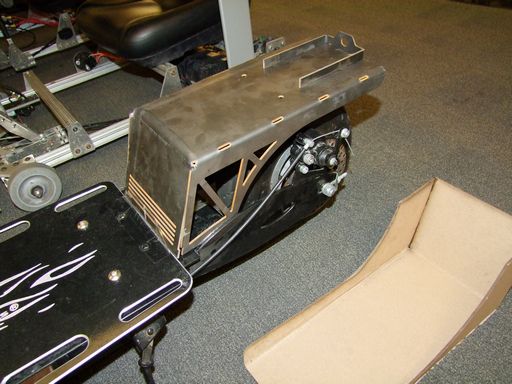 And the final piece fitted onto the rear with some clear tape. I accidentally left the teeth too far away from the edge of the brake for the last fold – the one with the grille on it. That’s why it’s inset a little from the edge of the side flanges. Fortunately, it was not a disastrous mistake.

Up next: Actually welding this sucker to the frame, and where the hell am I going to put the batteries? To also feature an extensive DERPDRIVE update, since it, too, involves tons of metallic hot gluing.

One thought on “The Successor to Melonscooter”