In the spirit of Motorama always landing on or near Valentine’s Day, here’s some robot loving. 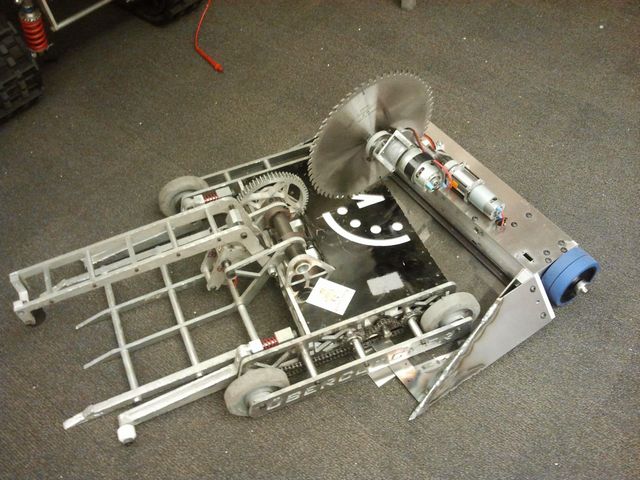 That’s Jamisons‘ new somewhat-secret-but-not-really 30lber megatRON.  This bot was finished in the minutes before departure, as Jamison and I both had teaching responsibilities and other factors that somehow all decided to congregate this past week.

I spent much of Friday evening checking over Überclocker and making sure it was in working condition. After last Dragon*Con, the drive completely stopped working (it had gone one-sided in the first 30lber rumble). I hoped that the motors weren’t damaged and that, like at last Motorama, it was a solder joint issue, since the DeWalt motors really have no good place to solder to. 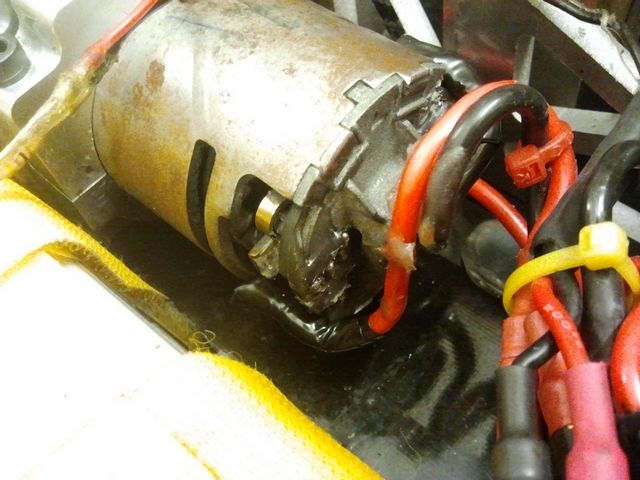 I’ve known this to be a problem, so I bought some 3/16″ flag terminals right after DC to remedy the problem. That’s how you’re supposed to connect to these motors.

A single large zip tie wrapped around the whole can, overlapping the terminals to keep them in, and I should have no more of these issues. The two solder-covered tabs above the insulated flag terminals are where the wires were attached before. This is an insecure location that’s prone to flexing. 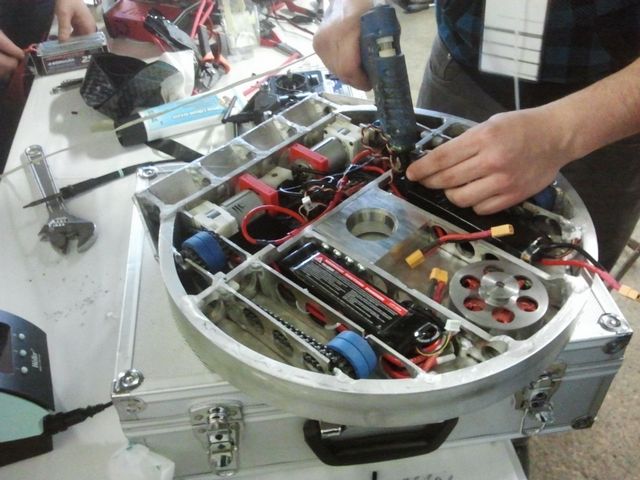 Fast forward a few hours to the event! The trip down was “ordinary” – with Mikuvan in good repair after the last-minute alternator save (with a Big Chuck’s Automotive Blog entry to come about that), the only issue was having to slow down when snow hit as we got close to Harrisburg.

Here’s Candy Paint being last minute saved. I foisted this effort off to Adam, and a new tagalong who is a visiting student in one of the labs that operate out of the IDC, Joaquin. Joaquin had started helping out everyone with their builds (he’s from Chile – he’s technically here on summer vacation), and at 11:30PM the night before had decided he wanted to come along.

The setup from the original plan had changed to the following:

Besides those two hacks, the bot ran everything as intended. 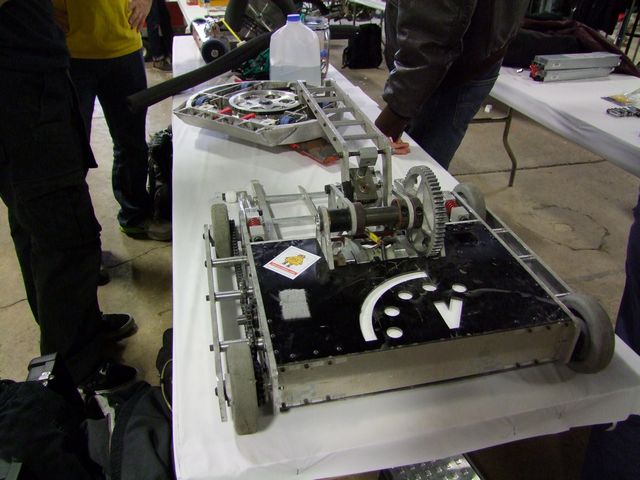 Here’s the MIT conglomeration pit table before everything started becoming scattered and messy. 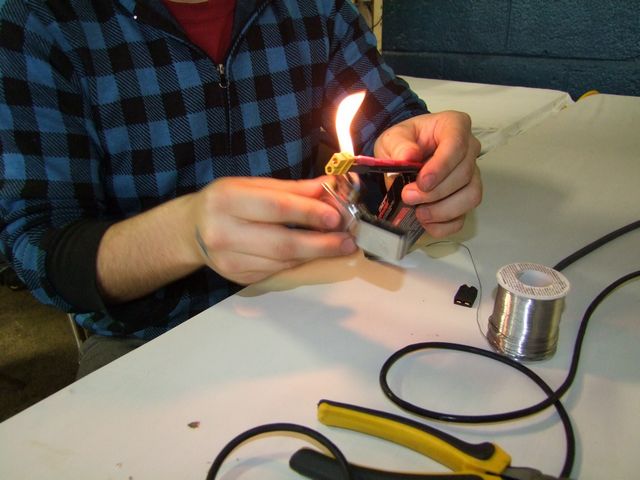 To finish Candy Paint, some field tactics had to be deployed, such as when swapping the connectors on the batteries… 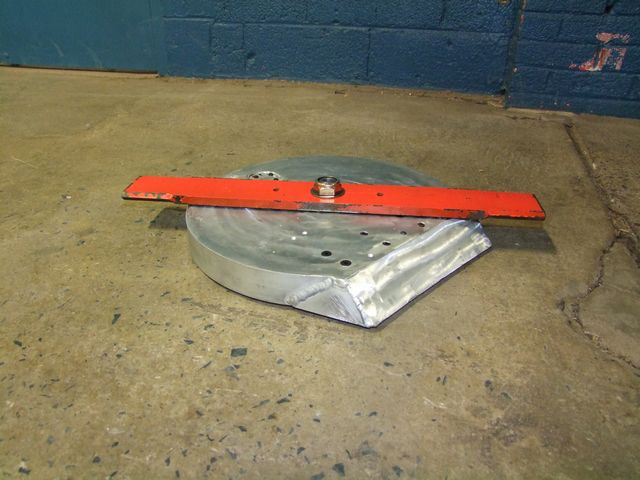 The bot basically right after it was finally through inspection and ready for first matches. Not bad, eh? 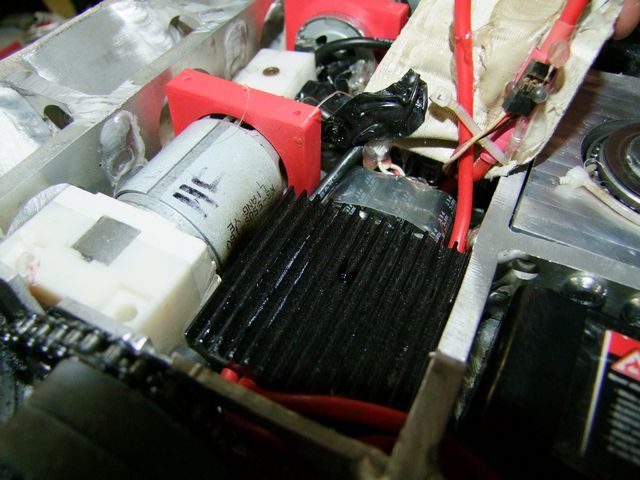 During the first match, the weapon motor controller decided to fail short after a solid impact that also flipped the bot a few times (luckily landing on its wheels). The reasons for the failure are unknown – these ESCs are known to work great, then spontaneously decide to peace on the next power cycle. The pulsed short current caused one of the Traxxas batteries to fuse a cell tab; for the next match, that was cut out. 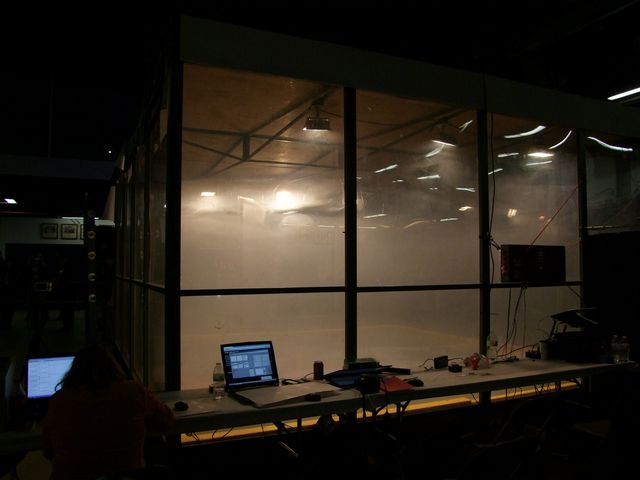 And it generated this cloud.

No, just kidding. That’s from HyperActive, in what must be one of the most spectacular kills in all of robot-time, in its match against overhead saw bot Gloomy (which looks a lot like megatRON). Here is the video (and another angle).

I have mixed feelings about this match. On the one hand – holy crap. On the other, now every well-meaning but naive member of the “You should put, like, a circular saw on it so it can cut through the other guy!” crowd now actually have a leg to stand on. 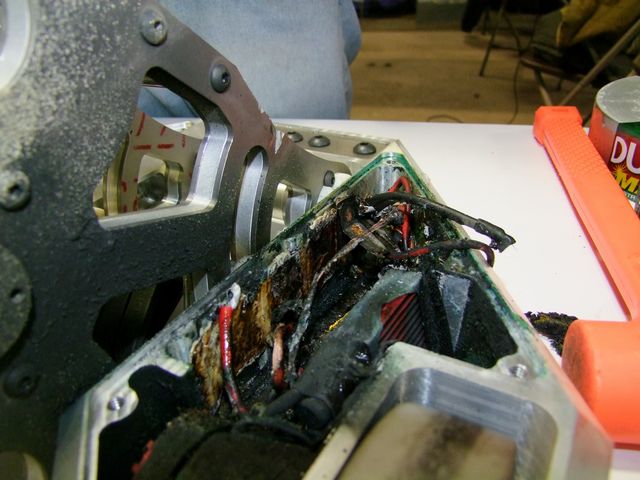 The aftermath of that fire. Gloomy’s weapon came straight down on the 1/8″ Lexan top armor, which gave way to the saw quickly – the titanium sparks seen in the video all came off the center weapon pivot. And right under it was the lipoly battery of course… 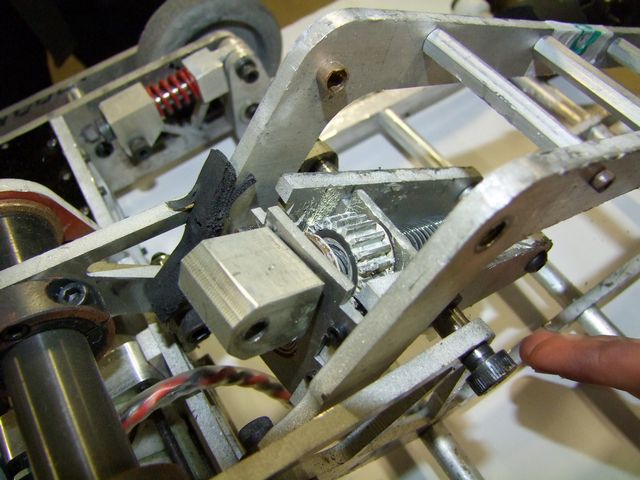 Clocker suffered a bit of damage in its second fight as the upper clamp actuator decided to disgorge itself. The construction of this actuator didn’t really leave much side support, so if it got pushed or torque sideways, the T-nut joints slipped out, which is what happened here. The real issue was I didn’t retighten all the screws from Dragon*Con. After I retightened everything, I didn’t have another coming-apart problem, though the motor eventually stopped working. 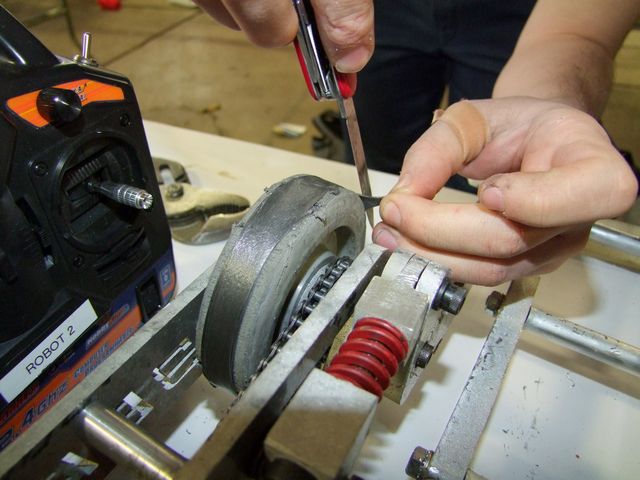 Another problem with Clocker was that I didn’t have spare wheels. In my rush to get Candy Paint ready, I neglected to order a spare pile of McMasterBots wheels, and only had one more spare. The wheel on Clocker that was the worst ended up getting that last spare, and the rest… well, by the end of my 3rd match with Nyx, they were gone.

So out comes the VHB tape. This was an idea cooked up by Dane – VHB double sided tape is anchored down with superglue, then stretched very tightly for multiple wraps, then anchored to itself with more superglue.

Now, I this this is a brilliant idea for smaller bots, or bots with less drive power, but Clocker’s all drivetrain so these tape treads shed within a few seconds of the pushing matches getting heated. For my last matches, it was like driving the bot on ice. 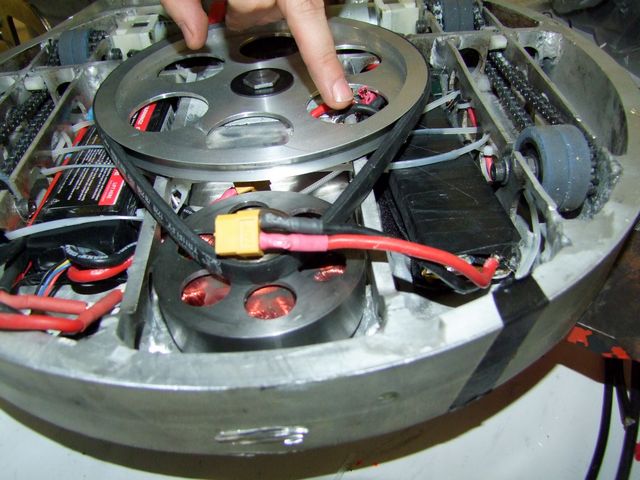 Candy Paint lost its last match when a wire came loose from the very ad-hoc wiring harness and got snipped by the big shredder holes in the pulley. Oops! 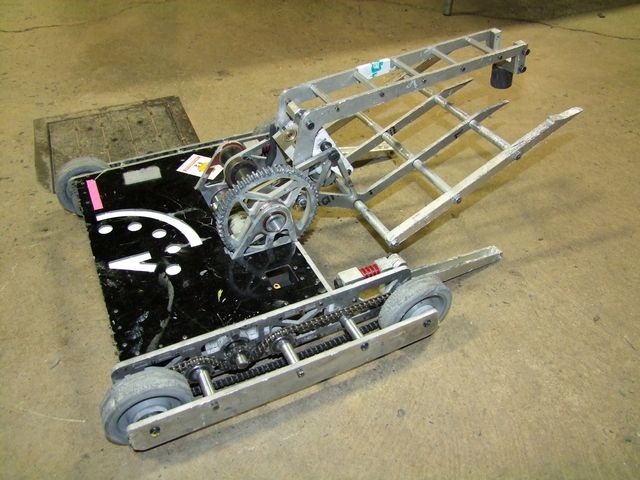 Here’s the final damage tally to Clocker after its last finals match (with Upheaval, no less). The amount of bouncing Clocker did broke off one of the end rollers, and the outriggers themselves are also extremely bent up (hard to see here). The clamp motor isn’t responding, but the actuator is still mechanically good. Seems like it’s due for a full overhaul between now and Dragon*Con…

I’m also considering switching the McMasterbots 40A wheels to some Banebots wheels. I can make a quick-change hex hub in the same manner as Candy Paint and make the wheels far easier to swap, and have many spares on hand. Right now, I have to hand-machine and modify each of the wheels, and as this and past tournaments have clearly shown, Clocker blitzes through wheels – rears especially.

I am extremely satisfied with Clocker’s performance this time. Much like Dragon*Con 2013, it came in second place, being out-robotted instead of something completely stupid and negligent happening. I also now have settled the score from that event with Nyx. As usual, it put on a very visually stimulating show.

vs. Upheaval (two matches for the championship)

Next, it fought Cathi (a ring spinner), wherein Joaquin accidently threw the radio’s “Throttle cut” switch so the weapon didn’t spin up, then Magnificent Poncho (a pusher), whereupon it spent most of the match upside down until the blade came off. It turns out that the blade motor was wired to spin in the untighten direction! Oops.

Finally, in a MIT-on-MIT grudge match, it faced the Atomic Bumble Prime.

One additional overlooked issue was that the blade was a double bevel profile (i.e. looks like <         > from the side). Any hit to an off-perpendicular surface will tend to throw the bot upwards, which clearly happened. This could have been taken care of with 5 minutes of grinder hits, but it was just not done.

Candy Paint’s future is a little uncertain right now. The bot is mechanically sound, took no damage past cutting its own wires, and I can easily rewire it to conform to my original expectations. However, outside of Motorama, there isn’t a local event that handles full 30lbers with weapons. I could put a sanding disc on it and bring it to Dragon*Con. Otherwise, Candy Paint will probably remain idled until next Motorama, unless I feel like putting it together properly and going to some basement to grenade a few old TVs and printers.

That does it for this event! Admittedly rushed preparations ended up working out somewhat, and Clocker has proven itself again to be a pretty damn reliable bot. And I’m not broken down somewhere in the middle of New Jersey.

I now turn my attention back to daily operations of the IDC fab space, as well as my new season of 2.00gokart students. Expect some updates on that as the semester progresses! The class is now somewhat legendary among freshmen and sophomores.

One thought on “Motorama 2014: How Candy Paint & Gold Teeth Happened in an Hour; Überclocker Wins 2nd Place in Sportsmans”