Hello everyone, I spent the last week in Singapore on a visit to MIT. 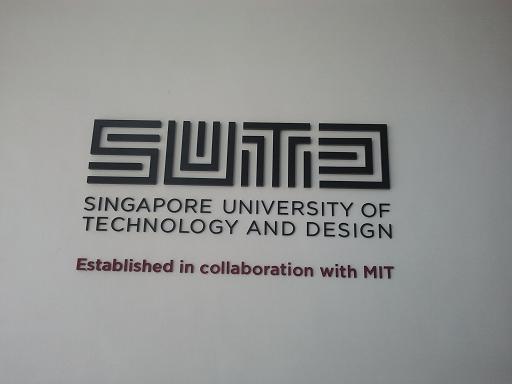 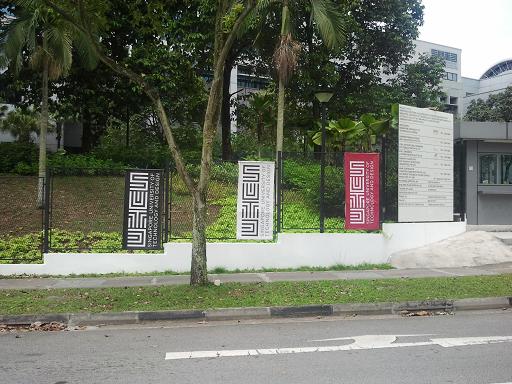 It even has MIT colors.

That’s right, the SUTD is now open, and the crack team of MIT faculty and students involved in the International Design Cent(re?) collaborative effort was shipped over (students in economy class, mind you) for the inaugural Open House event to be total scooter-mounted assclowns. 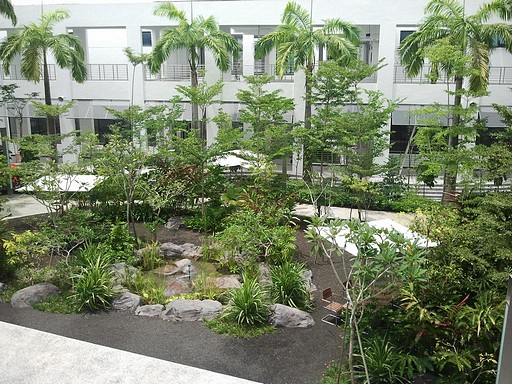 The temporary campus is located right next to Singapore Polytechnic and a little north of the National University of Singapore, because piling universities next to eachother is awesome. The campus formerly belonged to a technical school. Singapore being a tropical country where the weather is always 90 (okay, 32 Celsius) and 110% humid, the buildings are very airy and feature such things like tropical gardens. Why can’t we have tropical gardens? I’m starting one in Lobby 10, right now. 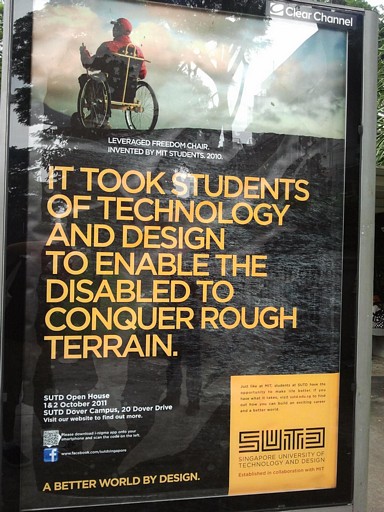 During the week before, billboards and bus stops in the area started featuring SUTD posters advertising the event. This one shown is of the Leveraged Freedom wheelchair designed through the MIT Mobility Lab, led by Amos Winter.

Oh, yeah, not only were posters on the bus stops, they were even on the buses. Full livery for several buses featured Amos and the giant ratchet wrench wheelchair. Why don’t we get entire T buses painted in scooter and ballcopter colors?! 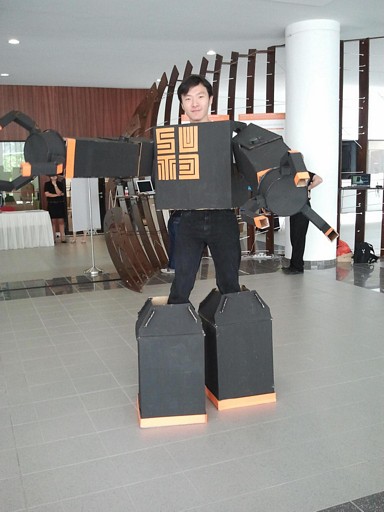 How to know you’re going to get a classy education: SUTDBot. 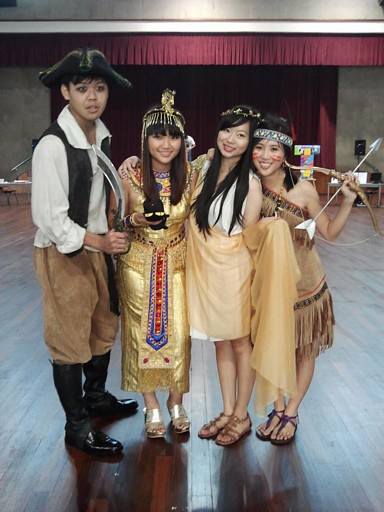 How to know your university is going to be super legitimate and renowned: your orientation guides are Jack Sparrow, Cleopatra, Jasmine, and Pocahantas. 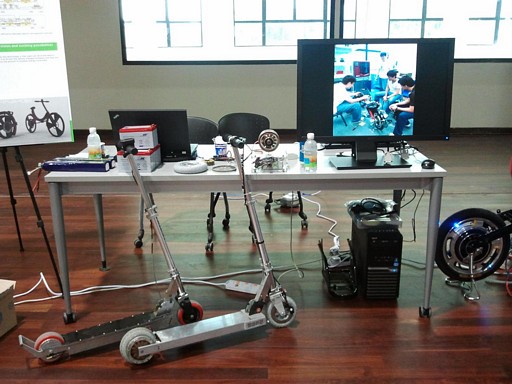 The MIT Scooter Demo Fleet made another appearance: RazEr, along with Kitmotor and random odds and ends. Besides Pneu Scooter, Shane also had his tinyquadrotor along, and the gymnasium space was perfect for getting some flights in. 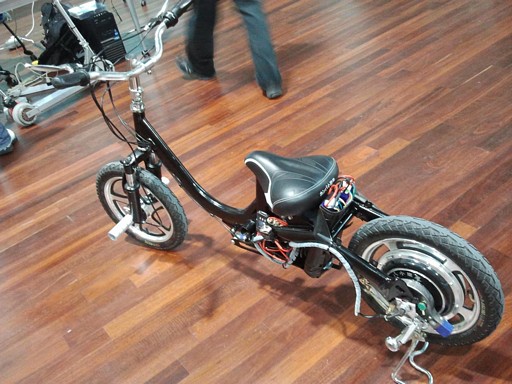 The small group of current SUTD students also had an EV faction, and they took a formerly street legal 200-watt lead-acid electric bicycle and turned it into a not-very-legal lithium-powered chopper. And painted it glossy black. The electric bike was originally from MKP Bikes. 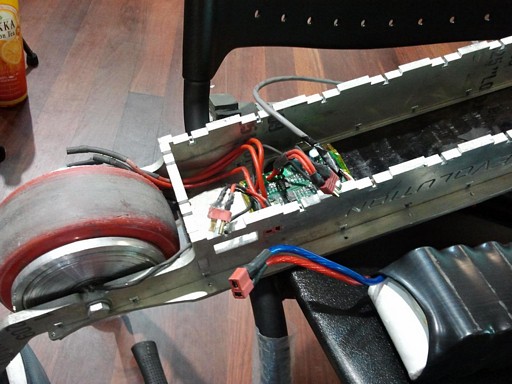 MKP came to the rescue late on Saturday as I decided to change the PWM frequency on Melontroller 2 to 8 kHz instead of the earsplitting 4kHz. The latter was done a long time ago using code copied and pasted from the Arduino forum, before I R’dTFM the ATMEGA328 manual and found out which registers to flip in order to get more PWM frequencies. In order to do this, I borrowed a USB-to-Serial converter from another student group display.

Unfortunately, it was most definitely not a FTDI cable. The pin difference meant I was shorting my logic power supply the whole time, and for one reason or another, I damaged the gate drive stage. What’s weird is that the Arduino survived the affair.

The solution was to buy a cheap and shady electric bike controller from MKP, which was a short bus ride away. Then plop it right on the back of the deck and keep rolling for the rest of the weekend like nothing ever happened. You know, just like last year.

With Melontroller 2 a proven design that works great when I don’t kill it out of stupidity, I’m going to 1. be making another one very shortly to replace this one and 2. Redesigning the board to take care of some of the hardware bugs and Little Blue Wire hacks. 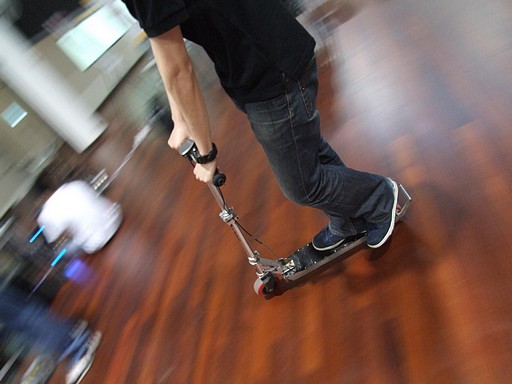 I totally took this picture. This is so awesome I might swap it as the title picture for RazEr’s static page. It’s otherwise a great “press shot” for posters and whatnot.

Because we had a few days of diddle time before the Open House proper, we visited several area businesses to dick around. Now, several of the former did come about as a result of visiting, so it wasn’t totally for our amusement. 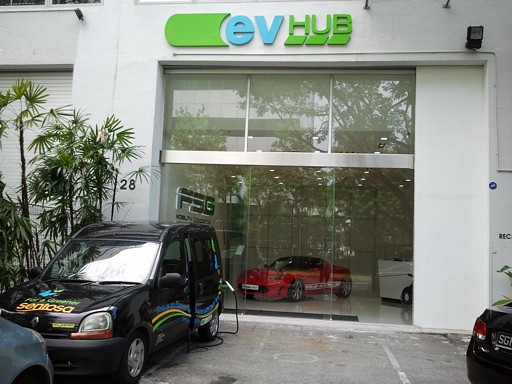 Firs stop: EV Hub / FSG Mobility Concepts, a local EV conversion house and alternative vehicle dealership that was featured on the Discovery Channel. We chatted vehicle design and marketing (the market structure being very different here in Singapore for automobiles) and also got to ride some super slick personal EVs. 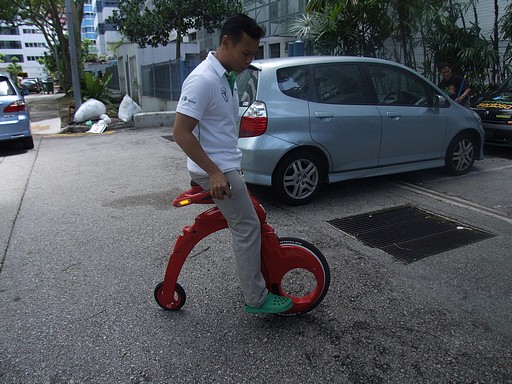 I take it back. It’s not slick, it looks like a malformed reverse dong. Made of carbon fiber.

One of the vehicles that FSG/EVHub sells is the YikeBike, a… you know what, I don’t even know. It’s an industrial designer student’s term project come to life. Great for the industrial designer sure, but it rides and handles like ass (or a malformed reverse dong thereunder). The drivetrain is an electric brushless system, but it’s not a ring motor like I expected, but an internal rack and pinion drive. It makes a horrible racket and is impossible to freewheel. The handlebars are backwards and in an unconventional place, and you’re up so high that you’re constantly shifting weight on them. It definitely takes a few minutes of practice to even begin riding one, and probably many hours to feel comfortable on it.

Why deal with all that when you could have tiny electric scooters? 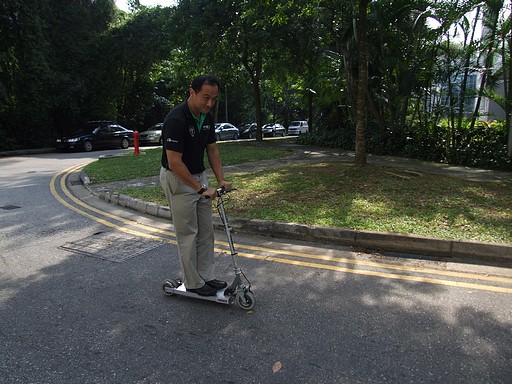 In this picture: Better than the YikeBike

We also visited the holy Mecca of ekranoplans, WigetWorks. I didn’t get around to it the last time I was in Singapore, but…. 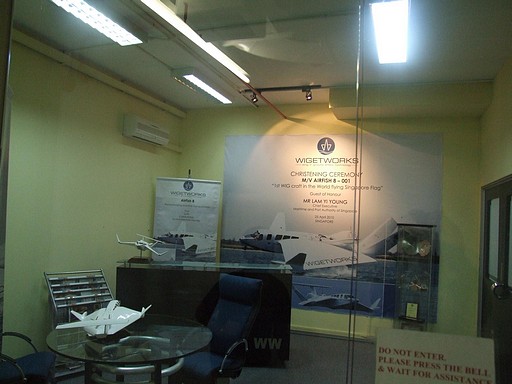 But it ultimate amounted to nothing. We were denied entrance due to intellectual property concerns. I guess they don’t like random surprise fanboys? Maybe if I brought Chuckranoplan, it would have been better…

Either way, what on earth are you guys protecting anyway? It’s not like your design wasn’t purchased from someone else 10 years ago and has remained unchanged since then… oh wait.