It’s been a year since I finished melonscooter. Barring the occasional controller experiment, it’s rarely been talked about or mentioned, and it doesn’t even have a vehicle page, which is something I should fix. This is mostly because it has worked reliably and has been more of a tool than a project (correctly implying that my project vehicles never really work that well). It’s well in the triple digit miles by now, and has saved me countless hours via not walking anywhere, therefore likely contributing to my early demise through obesity, heart disease, and maybe faceplanting into a bus or two. It’s also fairly well known around campus as a sign that I Was Here™, and occasionally gets me trolled by the campus police since it is actually capable of violating some internal speed limits (the top speed being roughly 25 miles per hour depending on things like headwind, tire pressure, and battery remaining, but is always above 20 or so)

The original design was put together in a weekend with very little forethought, and it definitely left alot to be desired. Namely, the entire drivetrain is open to the air above. This implies that whatever the tire picks up is going to end up in the air, and ultimately must land somewhere. When it’s been raining or otherwise wet out, the choice landing spot is straight up my legs and back. Thus, melonscooter is usually in hiding whenever the weather is anything but sunny and dry. This being New England, the chances of that happening as summer ends approaches zero. In the past, I’ve done silly things like tape together wheel covers and fenders: 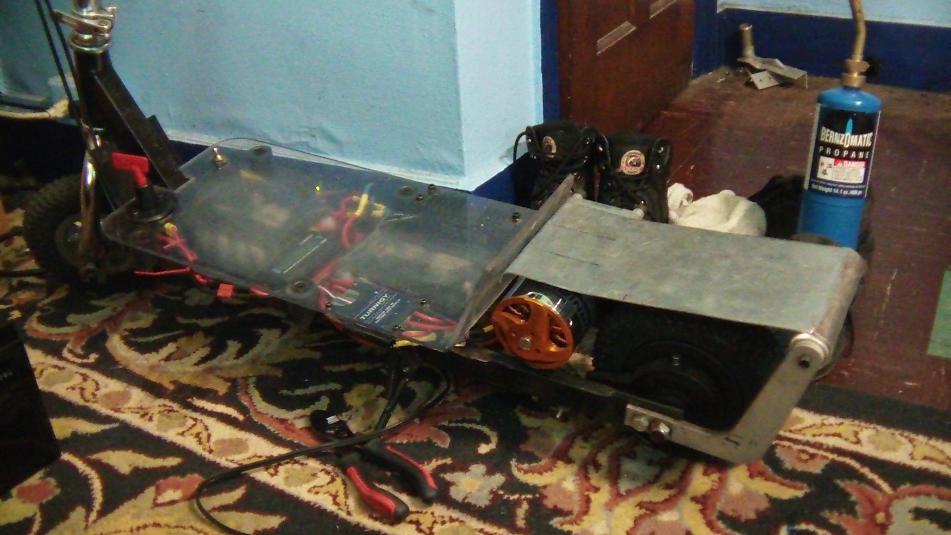 I forgot what that torch was for.

They would usually work okay, but were just too hackish to keep using (and the cardboard ones would just melt after one trip anyway).

This was actually the single biggest impediment to using the thing regularly. The electronics and batteries were reasonably weatherproof (the controller having been moved inboard since the above photo was taken) so the only issue was me being unhappy with a trail of road grime extending from my back down my pants legs.

With the summer ending once again, I decided to just get it over with and do something about it. There were some other issues with melonscooter that I had complained about before, so I figured in one upgrade I’d take care of them all. 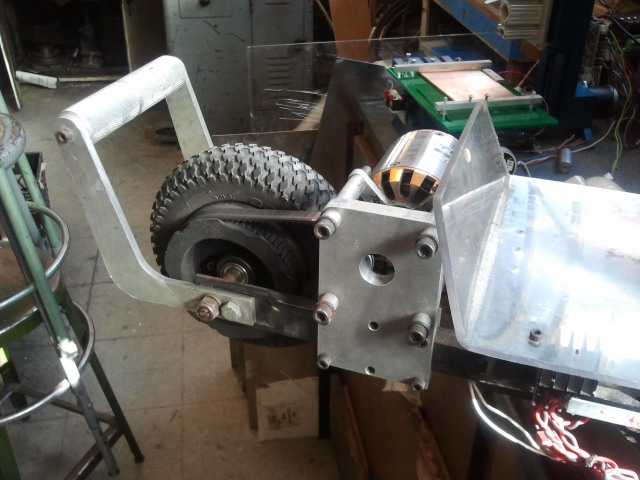 So here’s what the back of the thing looked like as of yesterday. Another problem with this is that the huge wheelie tail wasn’t actually all that stable. It was mounted directly to the wheel forks that were punched out of the soft steel frame tubing, so standing on the tail would actually force the axle mounting slots apart and leave it very floppy. It got to the point where I was vice-grip-crushing the axle mount slots back together every few weeks. Adding that secondary nut and bolt ahead of the main axle bolt helped a little, but the wheelie tail was still “soft” and a little wobbly up and down.

I also had no cargo space whatsoever. Trips to the grocery store or convenience store were made moot by the fact that I could only carry back what I could stuff in a backpack or reasonably hang off the handlebars. This was inconvenient to say the least.

The plan I cooked up was to make an integrated motor mount and “stern deck” kind of like the back of Straight RazEr which would clamp or bolt onto the frame rails and provide both wheel coverage, a place to stand, and potential for cargo space. After staring at the stripped down back end for a while and taking in-place measurements of where the wheel and motor were located, I came up with the following. 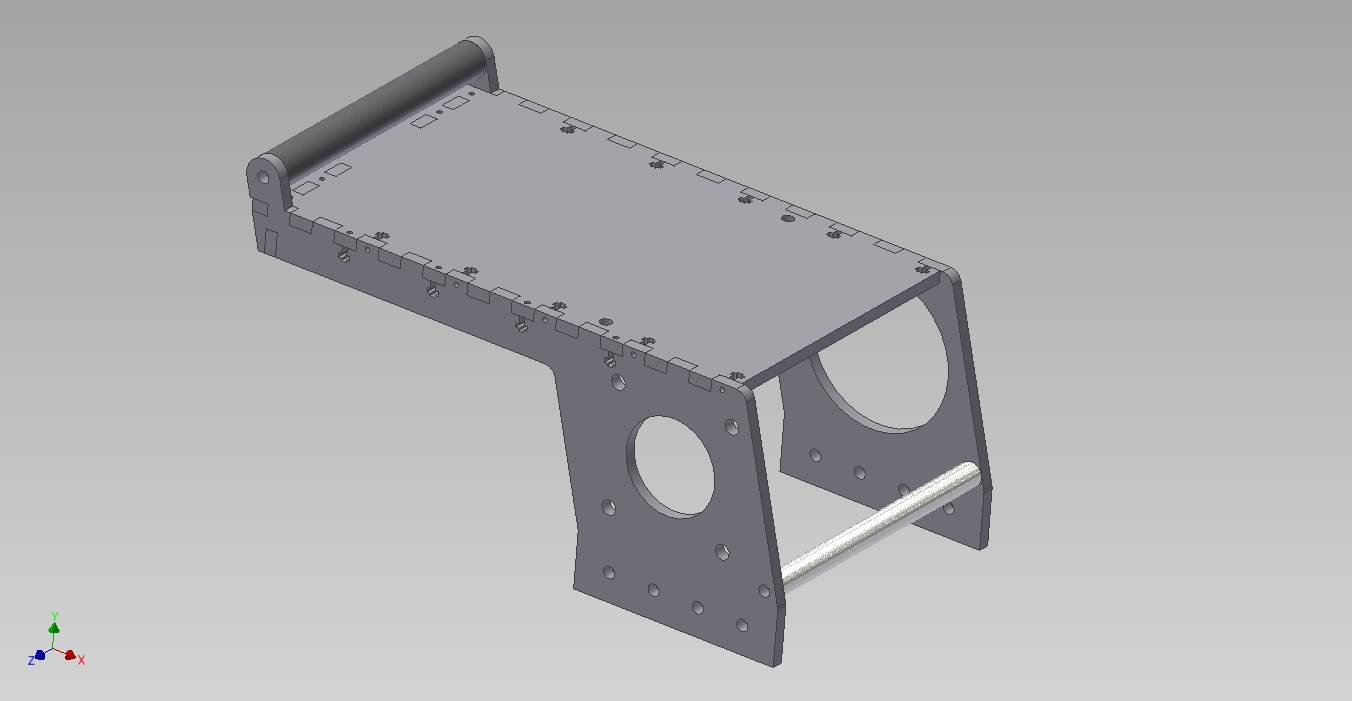 It’s a primarily 1/4″ aluminum, waterjettable upper deck. Due to the frame geometry and motor clearances,  I had to move away from a convenient clamp mount into through-drilled holes. A clamp would have required the volume occupied by the brake mount and I would have had to move the motor upwards a half inch or more so the rotor side could clear (the original mount had the can hovering less than 1/4″ above the frame rail). I didn’t mind fixturing and drilling some holes. 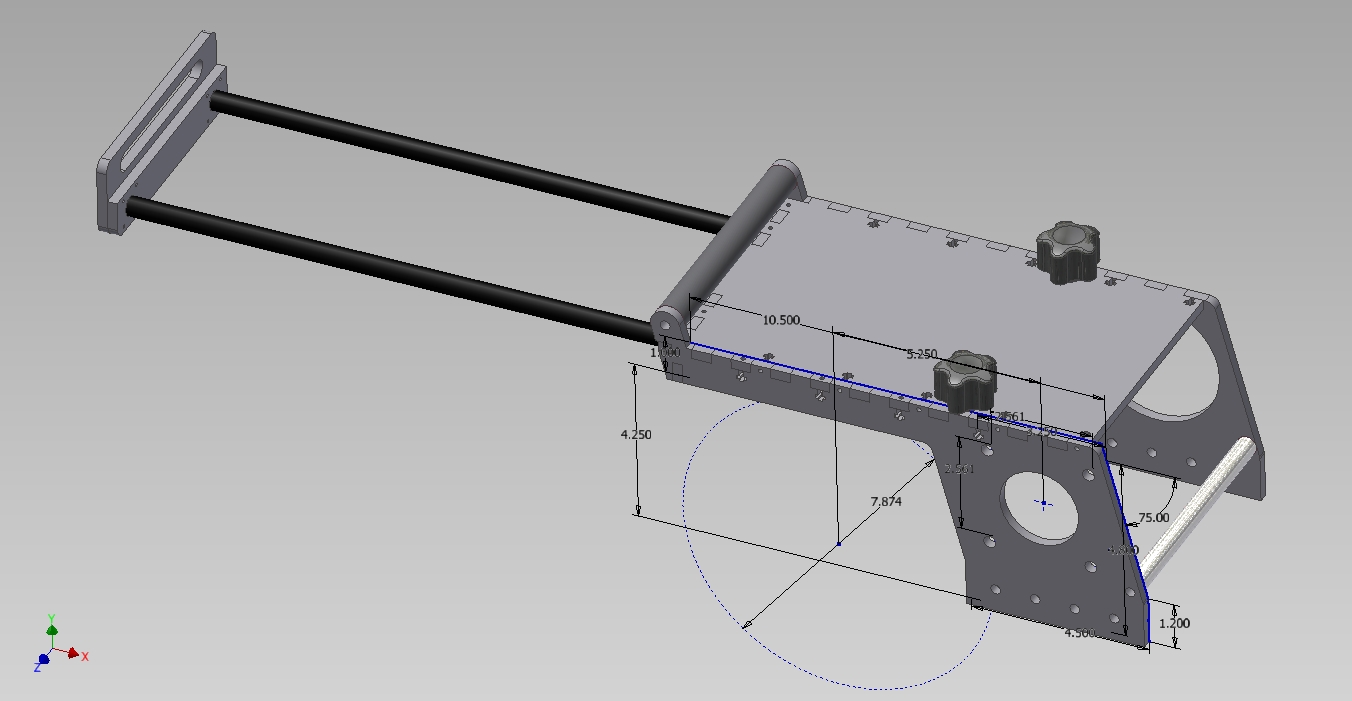 The solution for the cargo space issue lay in the standard 13″ milk crate. These things are common and give you a good cubic foot or more of storage space, and it’s common to see them on the back of bicycles. So I figured I’d make myself a detachable mount for a an ISO standard milk crate (does that standard exist?). The bars pass through a vertical plate with 2 holes, which is the primary support, and I’ll machine some clamps to hold them on the close end (those big hand knobs are for closing the yet-to-be-made clamps). The maximum extension is 13 inches, and I’ll fasten a crate to the bars with some crafty zip tying.

I was planning on making it foldable or telescoping, but this is not exactly a scientific exercise… 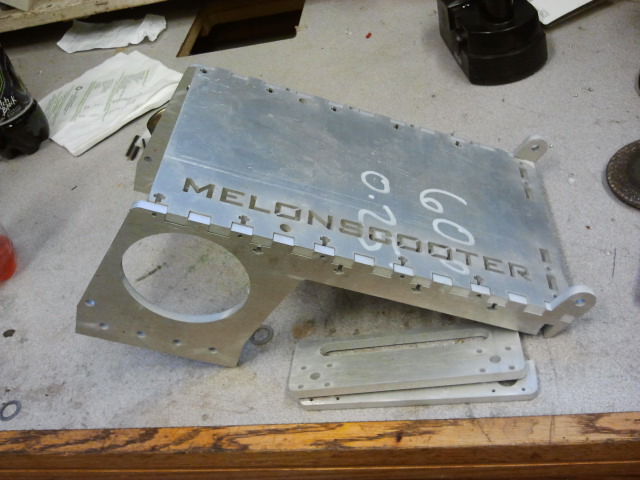 So let’s begin by milking the teets of the Institute and getting my parts waterjet-cut from 1/4″ aluminum. This was from the same stock that Straight RazEr was born of – I actually did buy something like 50 pounds of aluminum on eBay recently. I ordered some 24″ rod stock to make the rack of crate mounting from, but they had not yet arrived.

By the way – all the pictures this time will be horrible grainy 640 x 480 because I accidentally set the camera on my cell phone (which is actually pretty decent and has autofocusing) to 640 x 480 somehow, and didn’t notice until I uploaded everything. There’s at least one good picture, I promise. That thing takes pictures which otherwise are just good enough for me to not bring my big camera everywhere now. 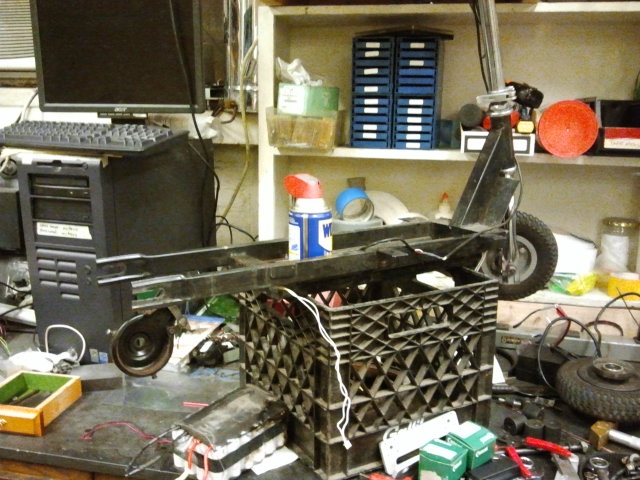 I committed myself to a night of assembly by totally parting down melonscooter. I took the opportunity to clean up everything in the frame, which was covered in road junk and rusty in some spots. 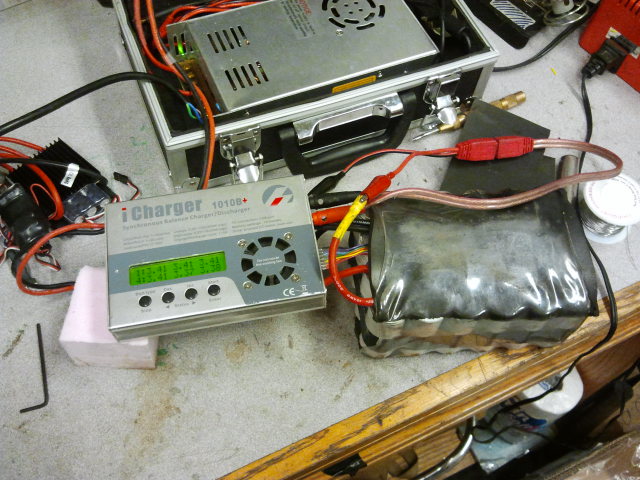 While the batteries were out of the frame, I gave them their yearly balance charge. The cells have only drifted apart about 30 to 40mv this whole time, so this didn’t exactly take long. 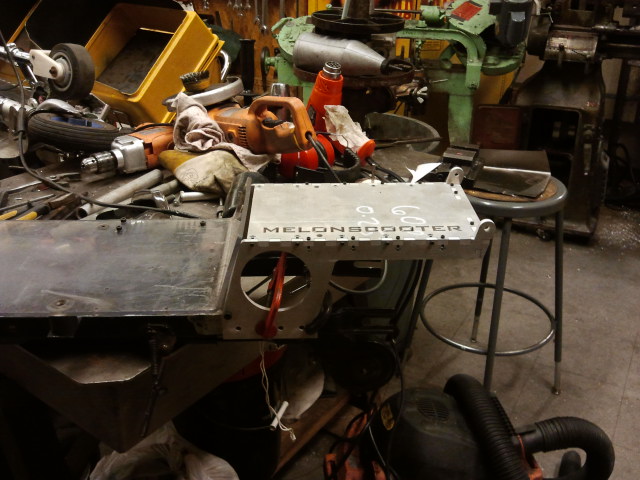 This is what the “stern deck” looks like when fixtured in place. It picks up right where the folded polycarbonate deck leaves off. The standoff at the front of the new structure (not visible in this pic, but in the CAD image) was the reference surface for aligning the whole thing to be level. After that, it was a quick drilling job (disturbingly quick for something that’s supposed to be steel, mind you) to put the 8 holes into the frame. 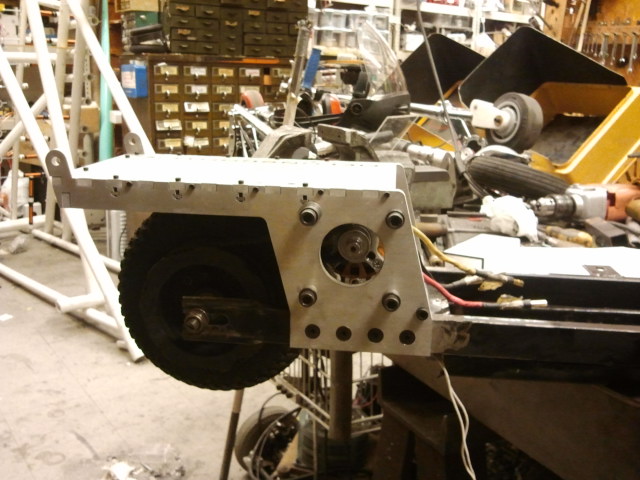 Eight countersunk 1/4″-20 bolts later, the stern deck is mounted. It turns out that 1.25″ was the ideal length for this job, but I only had 1″ long screws in standard socket head. The only 1.25″ (or rather, over 1″) screws I had were flatheads. This was fine, since countersunk flathead cap screws always make something look more hardcore. I also test fitted the wheel and motor to make sure I didn’t get it totally wrong. 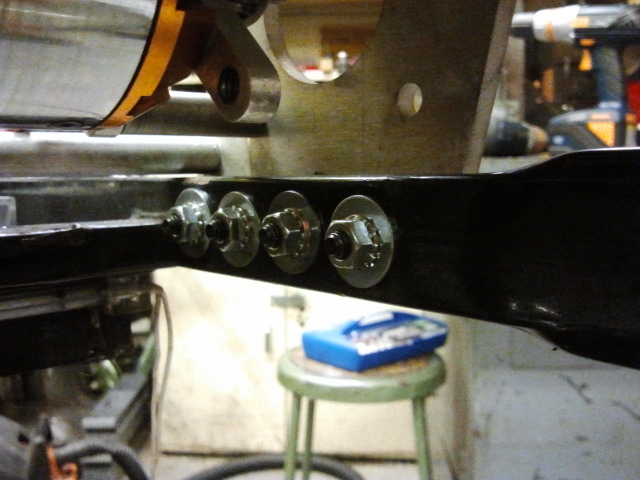 A view from the other side. Because the steel frame is just that soft, I used some Keps-type locknuts with 2 layers of washers: a small, standard 1/4″-20 washer pressing against a 1/4″-20 fender washer. The fender washer’s huge surface area allowed me to crank down on all of them without caving the thin wall tubing inwards. 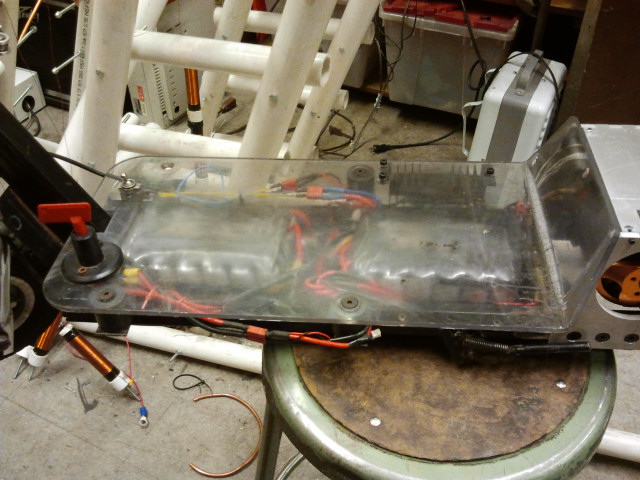 All the electronics drop back in as they were before, except I took the chance to reroute some wires so they don’t…. hang down as low.

Priorities first: got to make sure the gaudy lighting is properly reinstalled. Putting in the countersunk flathead screws turned out to be a good move, since I couldn’t find another place to mount the CCFL inverter that was within reach of the new glow tube location – under the deck. I ended up Velcroing the inverted right to the side of the motor mount plate. 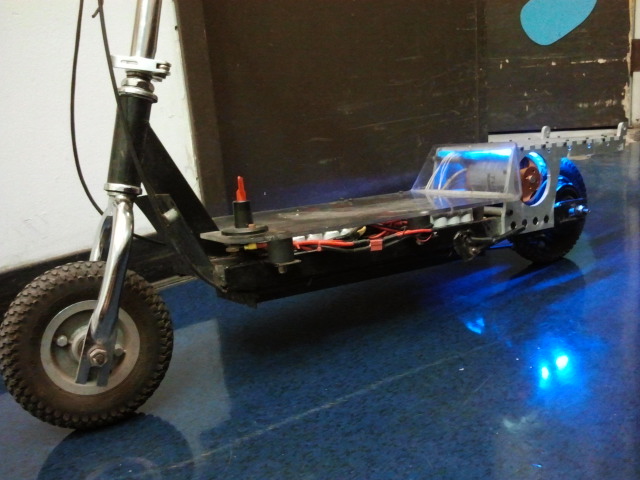 And here is everything wrapped back up. I’ll finish the Rails of Crate Mounting after the rail stock arrives. I’m also heavily considering making a similar attachment for the front of the frame for even more space. And balance: the added weight of  infinity Mountain Dew 2 liters is liable to making this thing wheelie like crazy. 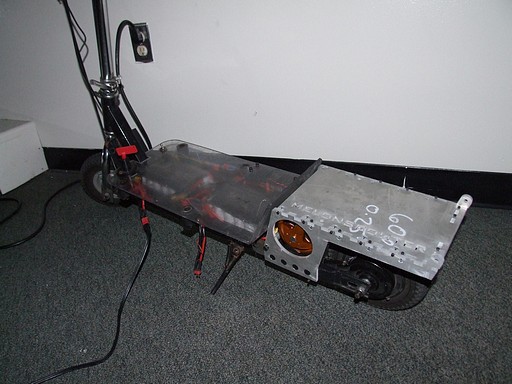 See, I promised a good picture of it…

One thought on “Updating the Melon Scooter”