I’m going to formally open another category since I’ve noticed that I do something like this quite often. The Beyond Unboxing category is strictly reserved for those posts where I strip something, usually a cheesy robot or vehicle part, apart down to the component level and examine it in detail to find ways to abuse it, or just have a good laugh. I’ll be back-marking some pots as “Beyond Unboxing” which contain details, but this will be the first in-depth examination of anything.

The first topic at hand is yet another option for controlling your small electric vehicle drivetrain. Motor controllers are almost always the hardest component to understand in a vehicle for new builders. The hardware itself may be the difficult part to make (okay, unless you’re truly crazy and making your own motor controllers), but a motor controller is usually that black box component you buy or swindle out of someone, plug in, and don’t really care about how it works in detail.

There are plenty of options available for the small vehicle builder now [citation needed], the easiest to obtain of which is the Kelly KBS line. The only problem? They’re enormous. Compared to a R/C type controller, the power density of the average EV controller is much smaller. This is for good reason, since EVs aren’t guaranteed a stiff breeze blowing past them all the time, so the controller has to deal with more heat buildup. But for ultra-compact vehicles like the RazErs (both domestic and interinstitutional), the KBS isn’t an option: It’s just too huge.  The thing is thicker than my entire frame on the original RazEr. Past this, we have to turn to R/C airplane controllers, which are nice and flat, but hard to deal with when your load isn’t a propeller.

That’s why I think the HK 1/8 Scale series of car controllers (the ones in the nice case with no exposed metal – there are several different lines) have alot of promise. Actually, not just promise. They have been proven already on two vehicles: Amy’s doohickey and the Razor Wind. The best thing about them besides being small is cheap. Hobbyking wins the best amps-per-money award again:  The 150A is $60-65, but the 120A and 80A are only $35-40. Both of those vehicle designs used the 150A variant (HK150A) which is advertised as being 2 to 6S lithium battery (7.4 to 22.2v nominal) capable. The other ‘sizes’ are 80A and 120A, but are advertised as only being 4S capable. That’s not useful in a vehicle really, at least one of decent performance.

Now, I tend to believe in the Law of Chinese Packaging Inertia. If the cheap chinese thing outwardly looks the same, it’s probably the same. The 80A (HK-1-8-80A) and 120A look really similar to the 150, but they’re smaller in their pictures. Were they also smaller in person? The 150A has 3 input capacitors but the rest have 4. If they really were the same, could the 80 and 120A ones in fact handle 6S too?

Curiosity drove me to buy one and chop it up. 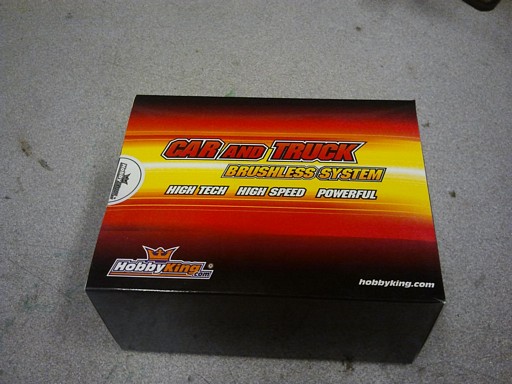 This is the box. As far as I can tell, it is static from model to model, since I also have seen the boxes for the 150A. 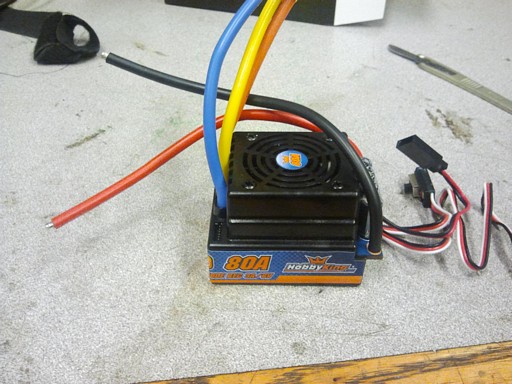 I’ll skip the dramatic unboxing process and skip right to the beef. This is the thing – it’s about 1.75″ square and has wires coming out of it. This is a good sign, but not if you’re the bomb squad.

R/C modellers complain about the size and weight of this thing – as someone used to seeing house bricks and small appliances mounted on vehicles, I contend they have no idea what they’re complaining about. Regardless, suspicion #1 has been confirmed: It is the same size as the others. I guess HK just cropped the picture closer for the 150 or something. 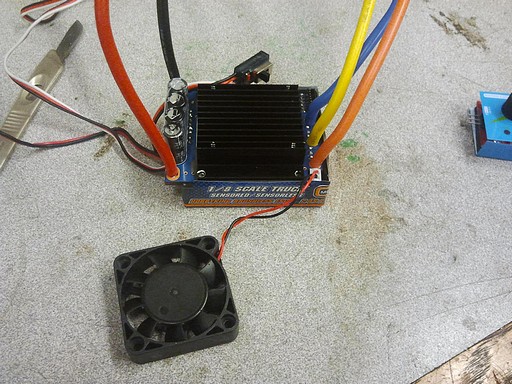 Starting the pornographic stripdown. The top shell comes off with 4 screws, which also anchor the fan. 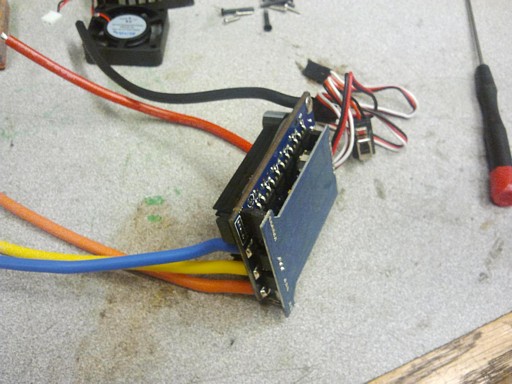 And the whole assembly pops out of the bottom case. It’s two boards, one power board and one signal and gate drive board….just like the 150. Hmm, suspicion 2 is on the verge of confirmation. Let’s look at the power board in closer detail. 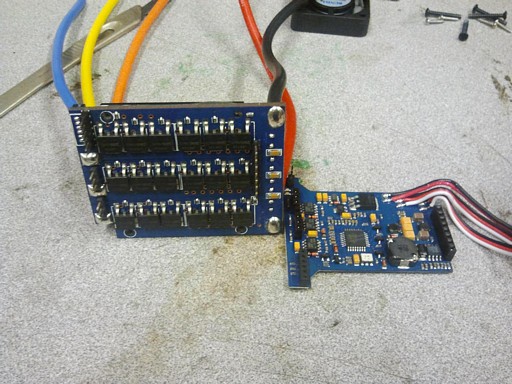 So this is where the 80 and 150A clearly differ. On the 150 amp controller, the power board is composed of no less than 36 Super-SO8 package FETs. This board uses 18 IRLR8726 type FETs, 3 per leg of the 3 phase bridge. They’re about 6 milliohms at 10 volts gate drive, so the combined parallel on-resistance of each leg is, exactly as spec’d, 2 milliohms. Suspcion #2 is therefore partially debunked: They’re not really the same thing inside. What I’ve seen before is that a 100 amp controller with 5 FETs has one FET taken out and is sold as a 80 amp controller. The same kind of ‘binning’ occurs in CPU and other silicon manufacturing, except the cheap hobby version is on purpose and for marketing purposes only. However, these ESCs therefore do use the same architecture but with different power boards, at least.

The FETs are 30 volt rated parts. The bus capacitors are 35v parts. This is clearly not what’s limiting the controller from handling above 15 volts, so a closer analysis of the signal board is required.

The voltage limiting factor for cheap controllers with low cell counts is the gate drive power supply and the logic power supply. Often, controllers with 2-4S (or up to 12 nicad cells) rating derive their gate drive power directly from the battery. Because modern power semiconductors usually have Vgs (gate voltage) ratings of 20 volts, this is just fine. However, it means they literally cannot be run above 15v nominal since a fully charged 14.4v battery is usually closer to 16 or 17 volts. Any higher, such as during braking or slowdown, could destroy the semiconductors through the gate pin. Usually some kind of hard limiter like a zener diode is supplied to avoid this.

The issue is that if this controller does indeed derive its gate drive voltage from the battery input, then it’s practically useless for vehicles. Sure, you could spend the time and try and jump 15v to the gate drive supply and cut it off from the rest, but in my opinion there’s a point of diminishing returns for hacking and chopping a commercial board – especially an inexpensive one.

The logic power supply is also important. Typically these 2-4S controllers have a single 7805 type linear regulator feeding the logic and possibly the 5v receiver circuit too. The chip will not be able to handle voltages much above 20 volts just due to heating. When a single-7805 logic power supply is found in a 6S (22-24v) rated controller, it is typically only driving the logic and the controller has no BEC. This keeps the current and therefore heating acceptable. The HK “200 amp” 6S airplane controller is a good example of this, and is worth its own writeup because it’s so ridiculous.

After some staring under a microscope, it was determined that the BEC had its own switching regulator: a MP2565 switching regulator controller. The giveaway to this was the big inductor core at the bottom right of the signal board. The logic was definitely not derived from this, which was unfortunate. That regulator can operate up to 50 volts, but the 6V BEC precluded the logic from being run of a normal 5 volt regulator (which needs 1.5 to 2 volts of overhead to start working). Of course, there’s the chance that the logic is 3.3 volts, in which case it would work.

Since the BEC power supply was eliminated as the source of gate drive and logic voltage, I wanted to look at the gate drive itself (which, by the way, is handled by 3 IRS2003 half-bridge drivers similar to the IR2184s I am fond of) 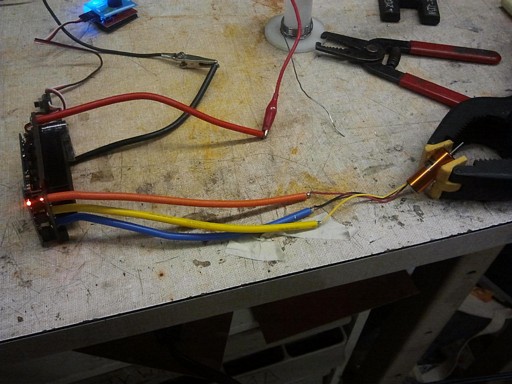 I scoped the gate of one FET while the controller was running in order to check the voltage. If it changed as I changed the power supply, there’s no question: I’m hosed. The test began at 12 volts and I swung it between 10 and 14.

However, it definitely did not change. The gate drive voltage held at about 9 volts the whole time. That means there was clearly another power supply somewhere I missed, and this power supply is most likely where that 7805 on the board (top center  DPAK component) is drawing power from. 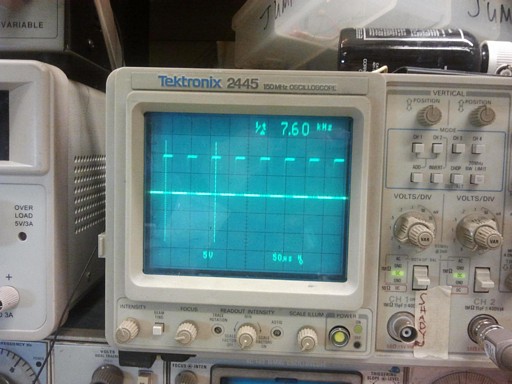 Closer examination of the board revealed a small 6-pin IC, a tiny inductor, and an unknown 3 pin regulator. Clever guesswork with Shane revealed that the tiny SOT-23-6 part to be a LM2681, a switched-capacitor voltage converter.

Mystery solved.  One possibility is that this voltage converter runs in doubling mode for low voltages and is bypassed as the voltage increases past 9 or 10V. I’m not sure where the transition occurs – the datasheet lists a maximum of 11.6 volts only, so there might be something else at play. At that voltage, the input just spills over the diode, incurring one Vforward loss in the diode of about 0.6 to 0.4 volts, and regulator loss (1.5 to 2 volts) before ending up as the 9v power supply. The supply held constant as the power supply voltage was decreased past 7 volts, but the logic shut the controller down (low voltage cutoff for battery protection) after that.

So there really seems to be nothing stopping this thing from running on 6S. All of the important components appear to handle it – even if the voltage converter failed, the 7805 and gate drive regulator can handle 24 volts but at increased heat stress.

Therefore I only did what came natural: turn up the voltage until something becomes unhappy. 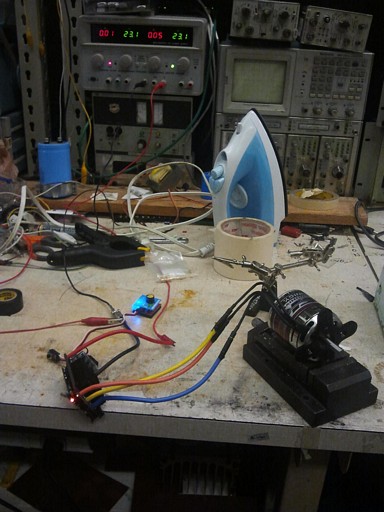 As I increased the voltage past 26 volts or so, it became unhappy. But not smoke-pouring unhappy – in fact there is a soft cutoff. The controller simply stops running the motor and start blinking furiously. The “undervoltage” LED morse code is also a “overvoltage” sign. This also occurred when the Turnigy SK3 test motor was braked quickly, causing a power surge back into the supply (A battery would have low enough impedance for this to not be a problem). Momentary surges exceeded 30 volts without smoke, but I bet it won’t live long near that mark.

Because the controller was able to scream for mercy (blink for mercy) before ultimate destruction, I spared it any higher power supply voltage tests.

So it seems like this is a pretty solid controller and can definitely handle 6S. I’ll bet a Singaporean dime (I have those) that Hobbyking “releases” a 6S version soon and charges $60 for it instead of $35.

The controller logic is the same as the 150A one (considering the signal board is most likely identical). The basic operation is:

So the reverse isn’t symmetric (bad for robots) but uses the same input and requires vehicle stopping beforehand. This is good for vehicles, where you usually don’t shift into reverse while moving at highway speeds. I’m sure you COULD in theory, it just won’t end happily.

The conclusion is that the HK 1/8″ scale ESCs are nice things. If you have a vehicle electrical system that doesn’t mind running on 24 volts maximum, it’s the smallest AND cheapest option available. Things notably lacking: current control and limiting, cool side functions like contactor drivers and light controllers. You know what, I don’t really care, it’s 6 cubic inches.

I wonder what I could possibly use this on.

One thought on “The Inaugural Beyond Unboxing: Hobbyking 1-8-Type 80A Car Controller”