I received the metal stock, bearings, and magnets for Kitmotter a few days ago, and so have been spending time hogging the 2D fabrication equipment when I’m awake during the day before the shop closes.

I’m building something a little special for Kitmotter 0001 (to follow the 4-digit versioning scheme I’ve seen in some Processing-derived software), something which should keep people from asking the question “Hey Charles, what actually powers your scooter?”. At least, it would provide an illustration to save me 1,000 words per RPM. 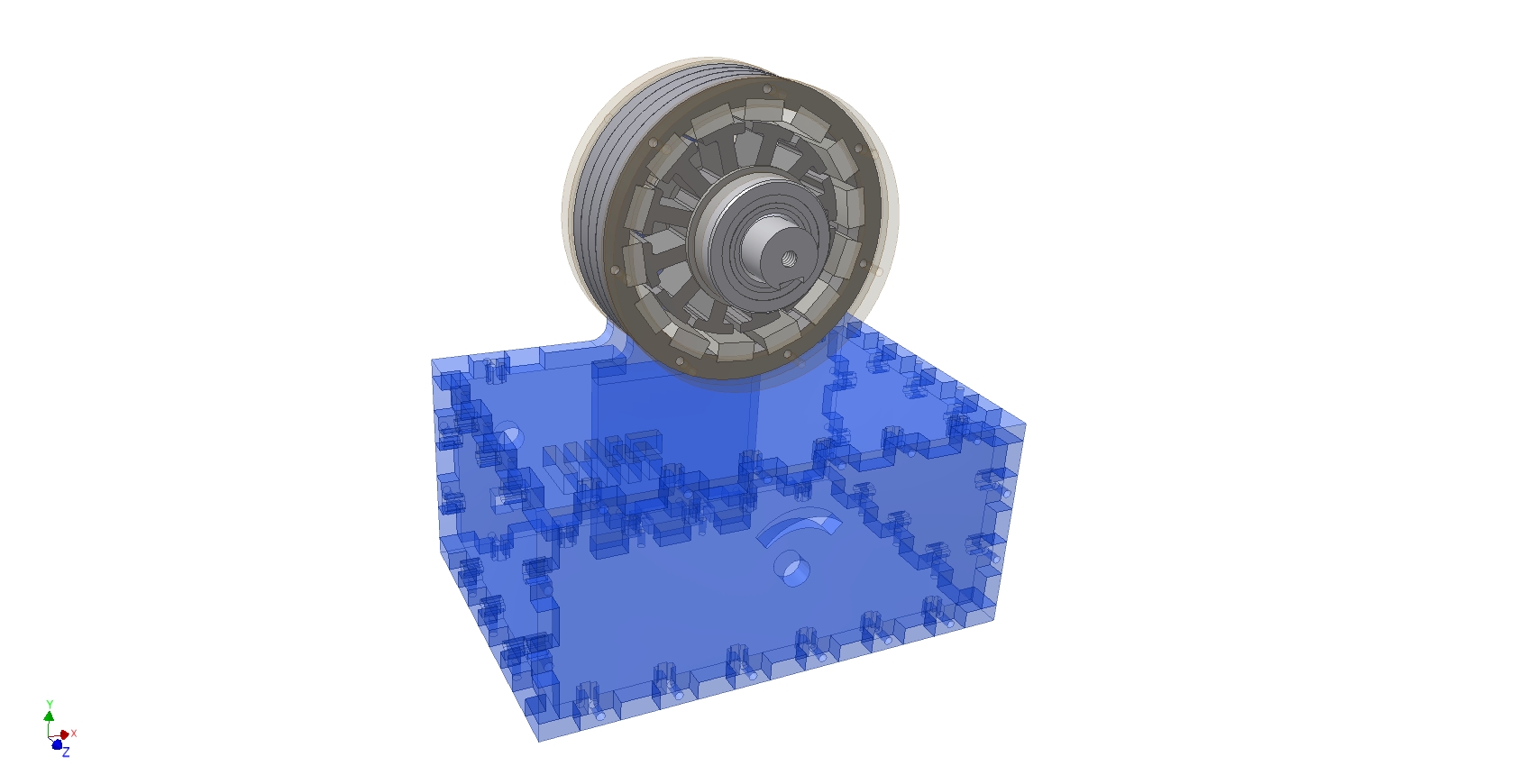 It’s cute and simple. The Kitmotter is mounted on a box that will hold a controller and a knob. The knob is turned by a curious onlooker, and the motor spins. Not very informative, but it was something I had in mind since the days of FVM when I wanted to use LEDs to indicate the state of the motor and the direction of current in each phase. Because the kitmotter has transparent sides, what operating mechanics there are in it are presented in clear view. 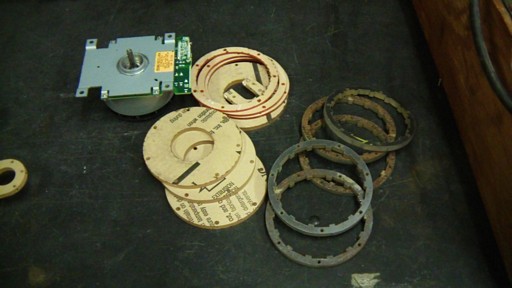 The materials used in the construction are some 6mm and 3mm acrylic for the endcaps and some 1/4″ steel plate scrap for the rotor segments. Oh, and a Xerox Phaser 4400 stator. The rotor plates were waterjet-cut, and the endcaps laser-cut, on-campus as per standard operating procedure (but the unspoiled can go spam Simon for the same services). 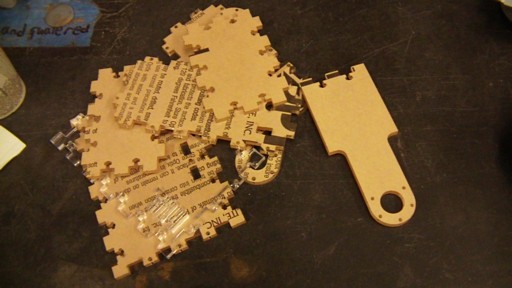 Out of the same sheet of 6mm acrylic comes the stand itself. I think I’m going to start removing the paper coating from raw plates before cutting now, because it’s such a pain to take the stuff off afterwards. 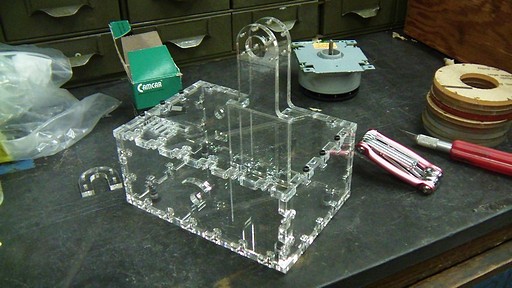 Really quickly whipping the box together.

Yeah, this is definitely something I built. You can tell because of the regularly spaced T-nuts and lack of attention such details as “How many spacers did I need again?”. The answer is 2, but I cut only one. Go figure.

The solution was to 3d-print the equivalent double spacer using MaB. 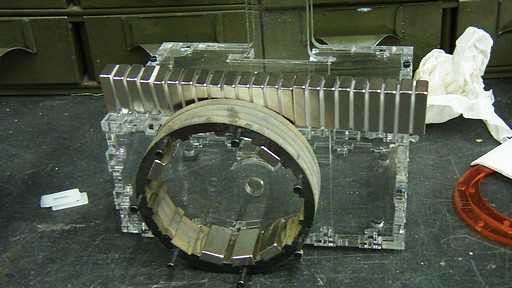 I must say I’m a fan of the waterjet-cut magnet retainers, since gluing these in was SO EASY AND PAINLESS compared to the martial arts tournament that was putting the DNIR together. The presence of so many magnets in a circle keep the rings aligned with eachother, and the roughened and uneven finish on the inside also helps with magnet bonding.

Great for making sure your motor never sheds a magnet, not great when you discover you somehow managed to put a magnet in backwards. I had to chisel it out and scrape off the remains with a punch.

My usual order of fluff-filled epoxy was used to bond the magnets. 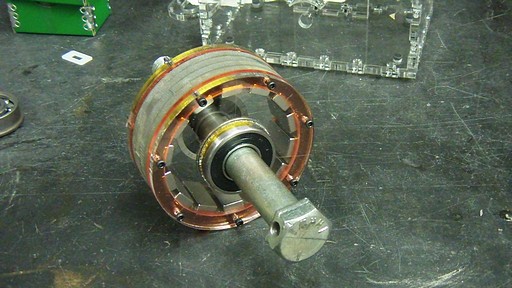 The fully assembled rotor, on a makeshift shaft for concentricity validation (result: Not Very). I guess the X-Y tolerances of the machines sort of add together on assemblies like this. It’s not bad, but there’s a perceivable wobble to the bearings if spun by hand that’s not really visually detectable. More care in assembling the bearing would also fix it, I suppose. And also not spacing your bearing bores with Kapton tape because you thought the laser kerf was slightly smaller than it actually turned out to be. 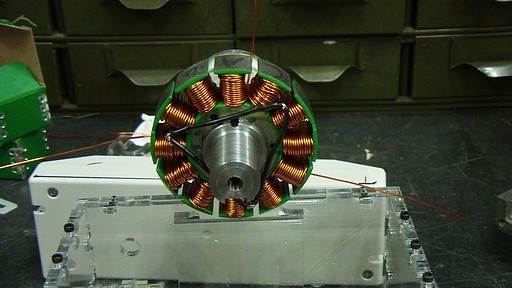 Here’s a bit of a leap of faith. I ended up deciding to make the machined-shaft version, so I carved the shaft out of 0.750″ Delrin aluminum steel because I only had the raw stock size in steel. I even cut the axial pin hole to retain the stator, but then decided to just epoxy the whole thing.

The stator was wound 26 (+/- 1 ) turns and Y-terminated. On the behest of Shane, I tried terminating the windings in a different fashion. Whereas normally I’d just twist the three wires together and solder them in a giant ball and shove the ball into one of the gaps between windings, this method just runs a loop of wire to connect the three ends together. Same effect, and I think it gives a better symmetry to the motor despite it being a bit more manual work. 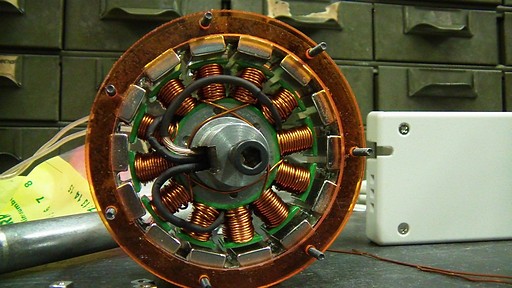 The phases themselves are terminated using some 16 gauge speaker wire (because it’s clear!). Here’s a mostly assembled motor. As the design showed, there’s plenty of airgap. Way too much for my tastes, but the ginormous deth-magnets should make up for it. 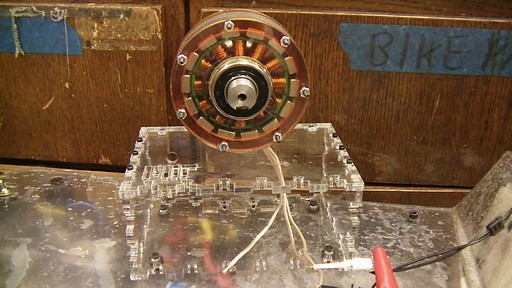 Once I mashed the last endcap on and bolted the whole thing together, it was time to use the official MITERS Brushless Motor Jogging Utility melonscooter to give a quick powered spin.

Result? Ignoring the severely unbalanced rotor which needed holding down of the box in order to not hover off the table, the whole thing is very smooth and quiet. My only real complaint was the massive sealed greased ball bearings adding substantial drag to the system. The idle current draw was around 2.2 amps just because of those damn bearings – at Melonscooter’s 40 volt happy discharge plateau, that’s easily 60 watts or more being dumped into the two bearings. RazEr’s original motor only drew 1.25 amps no-load. The DNIR, which is a motor 3 times as long and with something like 60% of the internal resistance (due to its longer windings being put into parallel), still only draws a bit under 2 amps no-load.

The result was that after a few minutes of fun with the throttle, the shaft was too hot to hold on to. That probably isn’t too good for the acrylic. Maybe it will run itself in with more operation. 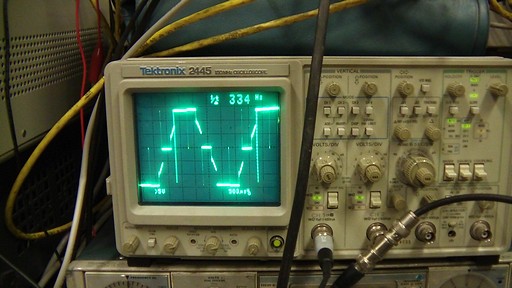 A check with the oscilloscope confirms the RPMs per Volt as (334 electrical Hz / (7 electrical Hz / mechanical Hz)) * 60 sec. / 40 volts = about 70 RPM/V or so. In metricland, this is 0.14 Nm/A (or V*s). Note that this is with sensorless commutation using a controller which is probably playing mind games with the timing. A more reliable measurement can be had using sensored commutation.  Still, not bad for something thrown together effectively in 4 hours or so, like 2 of which were winding.

What’s next for Kitmotter? I’d need to take it apart again to wire up the sensors, then shove the controller and it into a box and call it done. The controller will probably be the shady e-bike controller that I got in Singapore.

Oh, and for total kicks, I made a 3d printed version of the endcap: 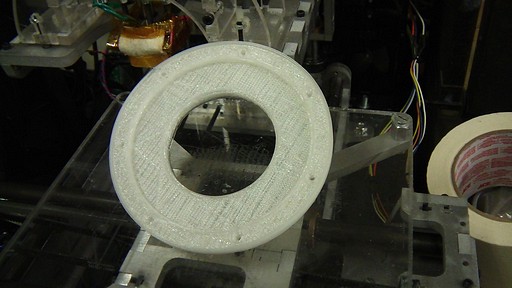 This fits the 1″ bearing version with the 3DP two-piece shaft. Kitmotter 0002 will probably be an experiment to verify that design.