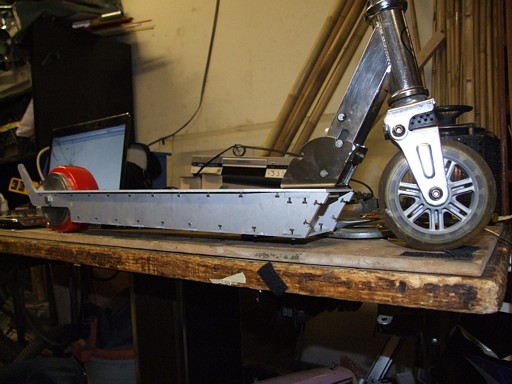 No, you can’t ride it yet. Yes, I know it has ground clearance issues. Those will be resolved.

And yes, I know my laptop screen is cracked. That’s like a whole new set of motor controllers for Clocker right there.

After finishing most of the framework, I turned my attention back to the motor. I finished the can and magnet ring before forgetting about the project’s existence for a while. Left to do at the time were both endcaps and the centerpiece of the whole assembly (literally), the stator mount & shaft.

Oh, and the random auxiliary features on the can. 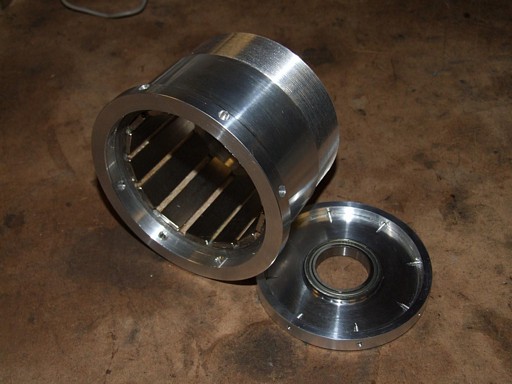 I’m going to hand-wave the endcap construction a bit, since I just randomly came into MITERS one day and did it. Its construction is identical, dimensions notwithstanding, to the RazErBlades motors.

The cross holes for both piece were made on my haute usinage indexing fixture. It turns out that all my designs which use features in multiples of 3 are actually less time-efficient to make since I can’t use integer turns of the handle. But if it divides evenly into 40, then I just have to count full revolutions. Yet another serendipitous laziness-increasing discovery!

After finishing the last machined features, I shoved the magnet ring into the can and pressed in the other endcap (not visible above) 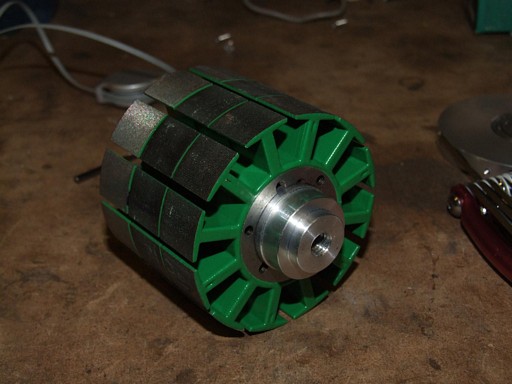 I normally don’t do this much hand-waving, but again, this center shaft was done while I randomly showed up to MITERS on a whim without my camera. The stock material is 1.25″ aluminum turned down to 28mm to press in the stator, 25mm to seat the bearings, and 0.75″ for the spacer nub. The center is tapped 5/16″-18.

Right now, those 3 stators are just lined up on the shaft. For space efficiency, I need to remove the epoxy insulation coating from one side of the outside stators and both sides of the center one. 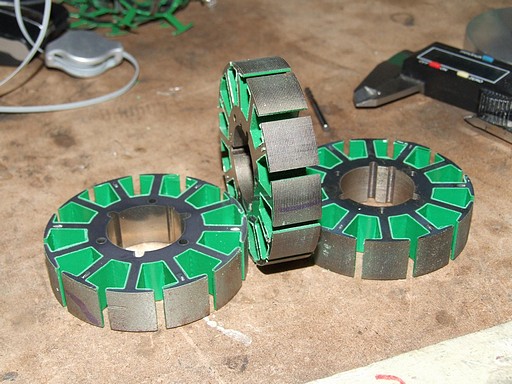 Fortunately, that’s why these things are laminated. A flick with a knife (and some plier work) later, the stators are ready for installation.

(Okay, so the real reason they’re laminated is for reduction of eddy currents, but I like to think they work like Pringles potato chips or those funky layered biscuit things!)

As usual, these stators were yanked from copier motors. Specifically, the Xerox Phaser 4400, with Xerox P/N 127K35701. 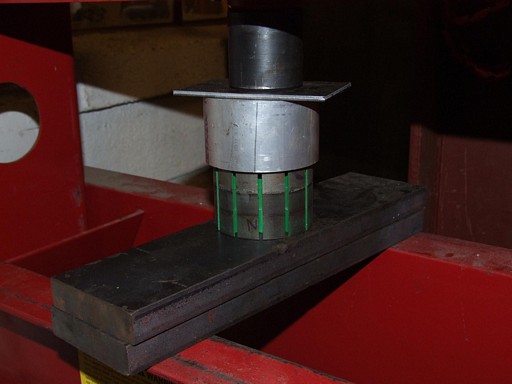 This isn’t a picture of the shaft being pressed through the stators. Nope – I’m actually just gluing them together at the moment. I spread a layer of thin CA glue between each, then threw the whole thing under a 20 ton hydraulic press (not using the whole 20 tons, I mean) and let it sit for a few minutes to cure. 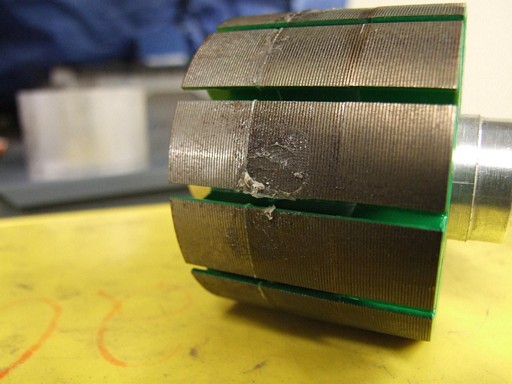 For your lack of viewing pleasure, here’s a few layers of the skin on my thumb. It turns out that spamming something with CA means the excess CA will just sit, uncured, waiting for something to come in contact with it. 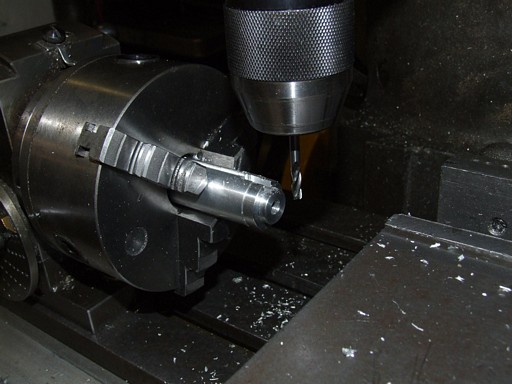 Now that the stator is ready, I put the wire access features into the shaft with the indexer. 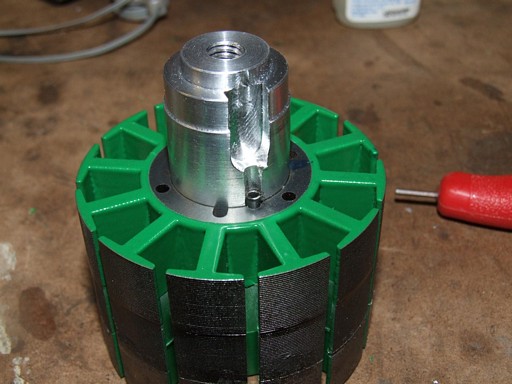 I’m trying something a bit different on this design. Normally, I just shove the stator onto the shaft with Loctite and call it good. This time, I actually machined a 1/8″ round groove into the aluminum shaft. A 1/8″ roll pin locks the stator (using its own round half groove) with the shaft. This retainment method has the benefit of being reversible. If I ever wanted to take the motor fully apart, change out stators, or something else, I can actually do it without destroying everything! 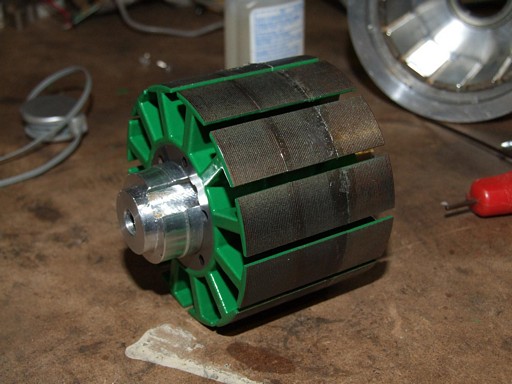 This thing is a 48mm long and 68mm in diameter. For reference, that’s a whole Turnigy Short Melon. I might as well have just yanked the stator from that thing.

Hey, if you want to build your own DIR, that’s a good place to start. 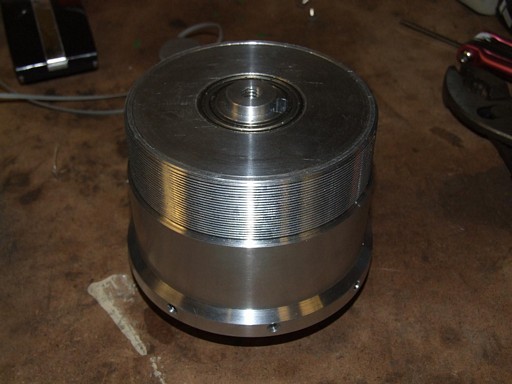 A test fit confirms that no, I didn’t machine everything wrong. This thing cogs like a beast, even with the 12/14 magnet layout. 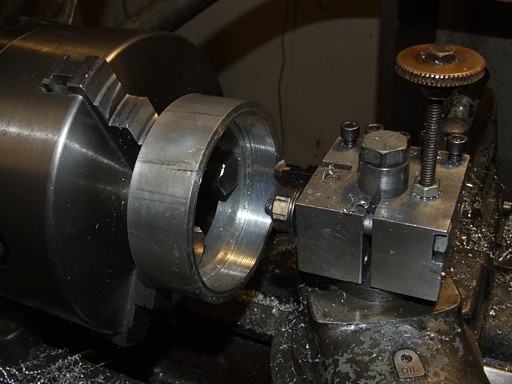 Like on the skates, the wheel is retained using a little locking ring. So I had to make another one for this motor.

Problem: My right-hand internal threading tool was lost in a terrific tip crash a few weeks ago.

Solution: Use the left hand tool while the machine is running backwards and feed from the inside out.

It took a few tries for me to get the multiple chirality changes right, but… 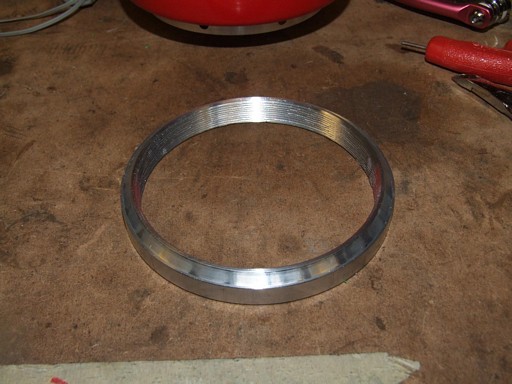 Now that’s a nonstandard thread if I ever saw one… 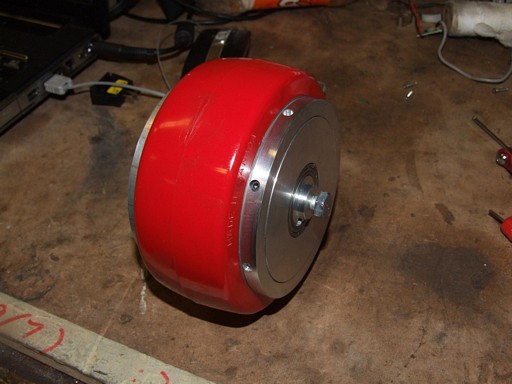 Test fitting the wheel. Did I ever mention how ridiculously wide this thing is? 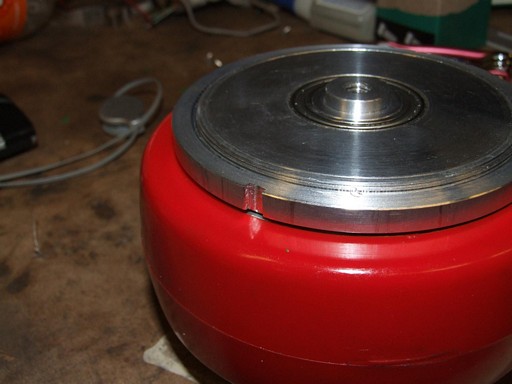 On a whim, I tossed the ring back on the mill and machined in these two little spanner wrench grooves. One of the things which I had neglected to do (out of ambivalence and laziness, probably) for both RazErMotor V3 and all the skate motors was actually make tightening tools (or fixtures) for the wheels.

One day, I’ll actually make a little spanner wrench or something so I can actually use these grooves. 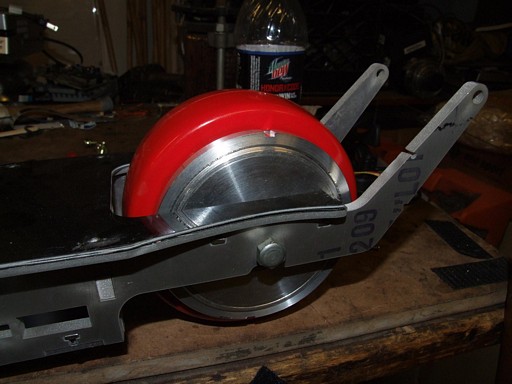 The eventual wires will exit the motor and lie within the little indentation under the (temporary) shaft bolt. 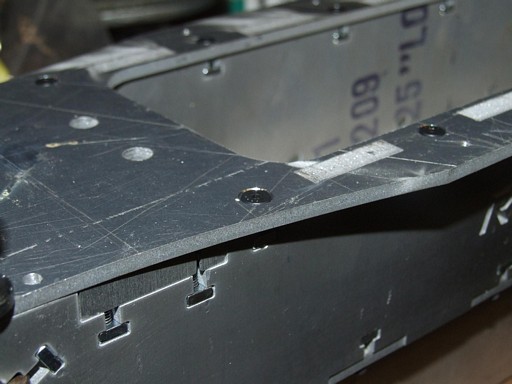 I went back and countersunk the structural top plate’s holes so I could use my flathead 4-40 screws. 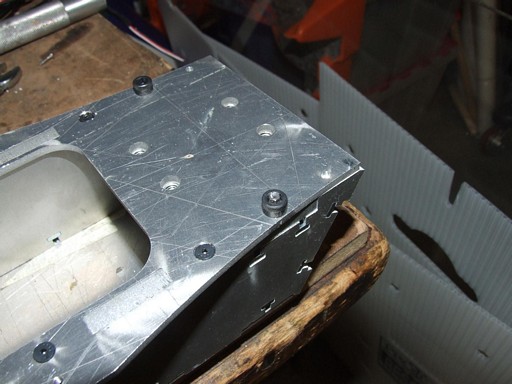 But much more importantly, I added these additional 1″ long 10-24 screws to the folding joint attachment area. They are actually legitimately threaded into the aluminum below. Imagine that – me, legitimately drilling and tapping a hole.

After reviewing the results of my 5AM engineering on the frame, I realized that while the M6 x 1 machine screws will definitely support my weight and survive the impulses of things such as, say, landing a curbhop, the tiny 4-40 T-nut slots will not. Not even come close. It amounts to trying to jump start cars with 22 gauge breadboarding wire.

Just to check if I had any manual fab skills left at all, I freehanded the hole on the drill press like I used to. I’m proud to say that I can still use a drill press. 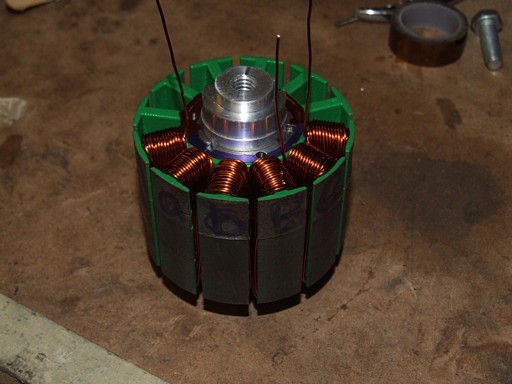 But that causes a mess of wire terminations interleaved with each other too. I’m electing to do it instead as

That’s right – just splitting the dLRK down the middle. So really what this is is the Dual Non-Interleaved RazErMotor, but DNIR just doesn’t have the same ring to it.

Above is the first finished motor-half, with 40 (+/- like 5?) turns per tooth. I have yet to terminate or wind the second motor-half, so I should probably get on that soon…