I’m back in the zone.

After back-hauling 1185 miles over 2 days from Atlanta to Cambridge, Assachusetts (and discovering in the process that Budget Rent-a-Car’s computer system cannot comprehend a mileage with 4 figures, to my delight), I’m about to go back down about 20% of the way…to the NY World Maker Faire as part of the MITERS booth/table display.

Great… maybe I should have just stayed a few extra days and just went 80% of that distance instead.

The reason why I ended up bringing most of everything ever (i.e. more than just the robots for Dragon*Con)  down to Atlanta in the first place was because of Maker Faire practice. 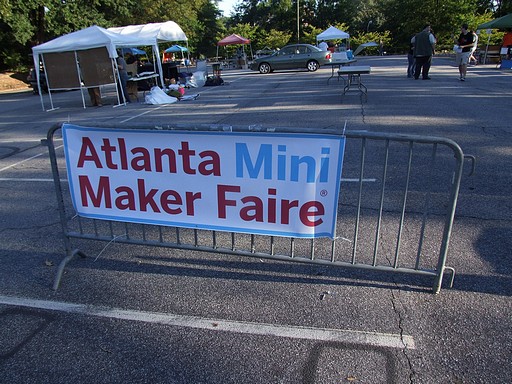 The Atlanta Mini Maker Faire, hosted by Georgia Tech, was a week after the D*C robot event, so I elected to knock a week off the semester and show up after being invited by some of the GT Invention Studio folks. 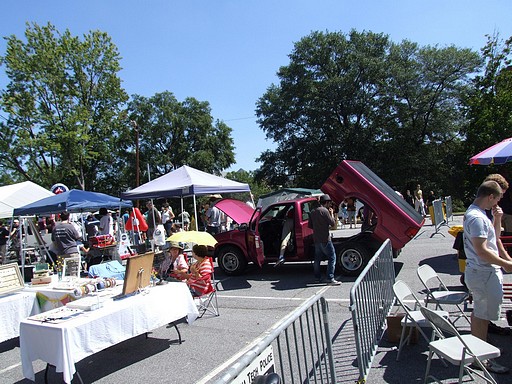 The event was held in a not-too-large parking lot, and about 60 individual exhibitors were there. The above picture is of the crowd and a pretty nice electric Chevy S-10 pickup truck conversion.

With rideable objects now making up a majority of my project fleet, the event was a great chance to make sure all of them had some testing time without me in the loop. You are generally always careful and mindful of a vehicle’s limitations if you’re the builder, but no such luxuries are afforded when your vehicle is being tested by strangers who had about 30 seconds of instruction beforehand. I suppose a hallmark of a well-engineered vehicle is if anyone can operate it with 30 seconds of instruction and not have it explode.

Sadly, only about half of my “travel fleet” made it through the day.

As the previous test video showed, Straight RazEr did fairly well confusing GT students on campus. After raising the front ground clearance another inch, it could finally turn and go over the average sidewalk crack and things like that. I brought it to the MMF, and it performed admirably well throwing off several random people.

The trick with sensorless brushless scooters is that you cannot just stand on it and hit the throttle. At least, don’t do it multiple times, since the motor pulling stall current across the controller will heat it up quickly. While most everyone understood the lecture and handled this part fine, I’m fairly certain the one person who didn’t caused the demise of Straight RazEr. A few seconds after I handed it off, I heard cries of “smoke!” and “fire!!” from the crowd behind me. I turned around and without much reaction, watched the massive plume of Turnigy smoke billowing out of Straight RazEr’s upper rear deck. 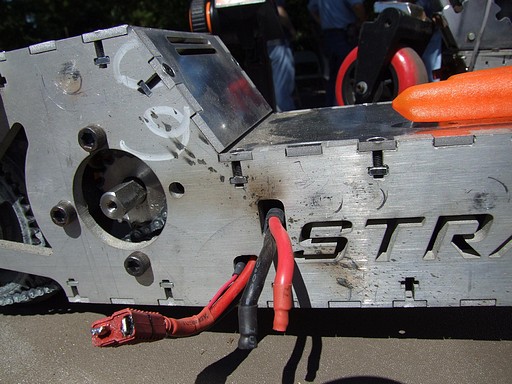 The short-circuit current desoldered my Deans main power connector. Some of the smoke and “Turnigy splatter” looks like it also made it out of the power access holes.

That SR ended up exploding wasn’t really surprising – the fact that sensorless vehicles need to be “push started” is really an alien concept to most people unfamiliar with them, and the majority push off too slowly or weakly anyway. The same reason is why very few people can actually ride melon-scooter, which also has a much slower “pickup speed” than Straight RazEr due to the latter’s much wider gearing.

Because Straight Razer was built mostly as a troll and the controller can be replaced later, I’m not going to try to bring it to NY Maker Faire. It’s considered out of commission until further notice. I might try throwing a melontroller on it some time later, but that involves adding sensors to the motor.

I don’t have pictures of RazEr at the event (it looks the same, trust me), but I’m definitely amazed at how well it has stood up. Not only was it extensively used to the point of battery depletion at the end, but both the motor and Melontroller 2.0 have survived what amounts to a continuous +/- 50g minimum shock test. Because of the very hard wheels I chose by mistake and ended up designing around (90D and 90A hardness for the rear and front!), every little sidewalk or road feature was transmitted without damping into the drivetrain. After the day of demos, I rode it twice around GT’s Yellow Jacket Park square essentially full throttle the whole time. Overall, RazEr’s design has proven itself to be very robust. I’m particularly relieved that Melontroller 2.0 is a stable version from which I can improve (you know, adding things like a real logic power regulator), so this is one goal for this fall and winter.

With Jamison’s new hub motor scooter sporting 60A Colson wheels, I’m also going to remake the front and rear wheels to use them. Maybe RazEr can actually be a useful vehicle after that.

However, for the time being, RazEr will be at NY Maker Faire, completely unchanged except for a full charge.

The biggest and most awkwardly shaped member of the travel fleet, Segfault was already flaky before I left, and it only got worse at the event. Not only is the controller, originally designed to last maybe a week, now entering its 10th month of use, but the drive motors are slowly giving out too. The left Banebots P80 gearmox lost an internal shaft retaining ring some time ago, which means occasionally the left wheel just completely disengages and spins freely. I’d keep the thing running by literally just kicking or hammering the wheel back in. But finally, at the MMF, this happened. 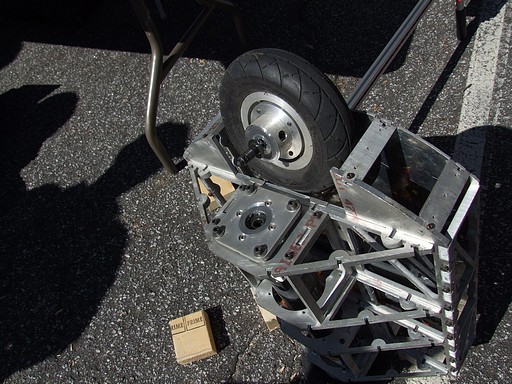 Alright, I’m finished. Before this, the controller had pretty much been totally reduced to a ball of twitching and noise. The breadboards are slowly falling apart (their contacts falling out the bottom side after the glued-on paper backing expired) and most likely the contacts are also oxidizing and being sporadic. With all of this, Segfault is officially decommissioned and the current version will not be repaired or upgraded. I will probably part it back out and repair the left P80 motor for future projects. The vehicle is too big and unwieldy, and has more than served its purpose of control theory demos, so if I end up building another Segway-vehicle (ahem) it will be much smaller and lighter.

In the mean time, anyone want a full aluminum Segway-like vehicle frame? Just add your own P80 motors and Arduinos.

Because of the state of utter wreckage it’s in, Segfault is of course not coming to NYMF.

This thing was a huge hit, and I’m proud to say that it also survived the day unscathed (though with quite a few more stickers). It looks very squat and unimposing, but few people could actually stay on and ride it because of how high off the ground the rider stands and the short “wheelbase”. The Beast-it-trollers handled the whole day’s operation in 90-95 degree weather with no problems after I upgraded the drive FETs to IRFB3207 4 milliohm parts, instead of the old IRF1407s which flamed out two Swapfests ago.

While the Advanced Beast-it-Troller has been assembled and bench-tested, I have not installed them or written the software for them… nor do I intend to for this weekend. LBS will be traveling to NYMF too, and I’ll probably be tooling around on it all day since it has about 25 amp-hours of battery onboard, and NYMF is half parking lot and half rolling grassy fields and gravel lots. Hell yes. 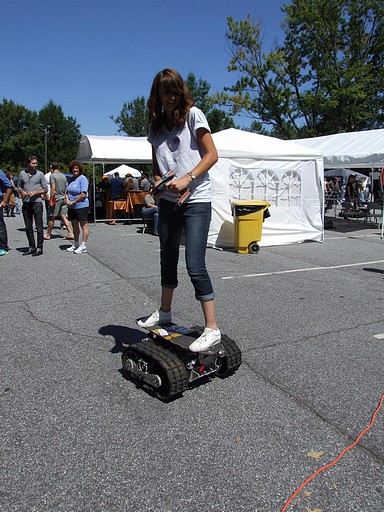 Other things that are also coming

I’m going to bring Überclocker and Cold Arbor along as display sculptures. Clocker is functional (not very battleworthy, but things do move) so it may participate in some demos.

The Kitmotor Demo Stand will probably be spinning on the table all day so more of you people will go and build scooters.

Finally, I’ll also truck along the erstwhile Make-a-Bot, which has been making parts for all the other projects almost trouble-free since last December. It’s now a generation and some behind the kit 3d printer features curve, and I intend to rebuild it in the near future. Maybe I’ll park it in the 3d printer nest, next to all the Makerbots to troll Bre Pettis. After all, it’s about 75% faster than a stock Thing-o-matic and 1000% more \m/etal.