I’ve been slowly knocking down the amount of half-taken-apart projects that have been taking up table space at MITERS. The usual shipping delays and distractions means I’m a little behind where I want to be,  but it’s not yet concerning. In other words, nothing has yet gone horribly wrong.

I received my shipment of carbon fiber from Dragonplate and proceeded to cut the top and bottom panels out on the same day. The CF this time is 0.023 instead of 1mm, so I lose some stiffness in the frame. I’m not quite sure why I chose the thinner panel actually – the scrapped PQ2 frame had 0.039″ CF top and bottom plates. 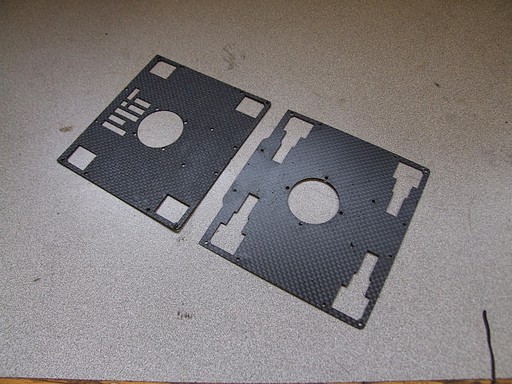 This was certainly one of the cleanest CF cuts I’ve made to date. I took several precautions this time to minimize delamination around holes and pierces, including fully double-sided-taping the carbon fiber to a solid wooden panel. Previously, I have either just clamped the CF to wood or taped the CF to a waterjet brick. The full support of the wood layer beneath the CF helped immensely – these cuts have almost no delam areas. The other methods would either allow the CF to flap up and down or still leave high percentages unsupported on the bottom. 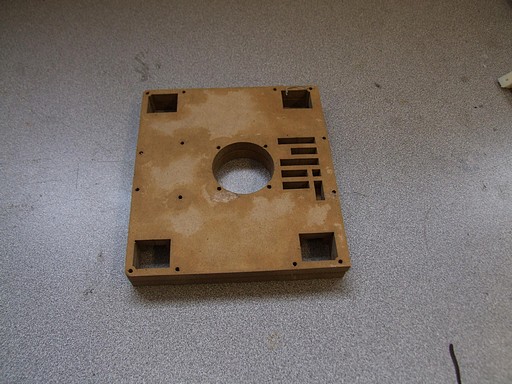 The upside to this method is that I get a cute MDF billet Pop Quiz out of the process at the end. This was the backing for the carbon fiber after I stripped off the wet tape.

With Pop Quiz’s frame all printed and the CF panels cut, it’s mostly a matter of sitting down and assembling the thing. I got the VEX motor controllers in and also found my spare Spektrum BR6000 from who knows how many robots ago. Because PQ will be an experiment in using the VEX controllers, I’m going to rewind the weapon motor for 7.4v (2S) operation.

RazEr is officially all closed up and working again – the only thing the battery needed in the end was a charge and balance. God I love DeWalt drill cells. What other kind of battery doesn’t mind getting zero-volted for a month straight? I don’t doubt that I have had some lifecycle and capacity loss because of the extended flattening, but RazEr is not a very high current system anyway. 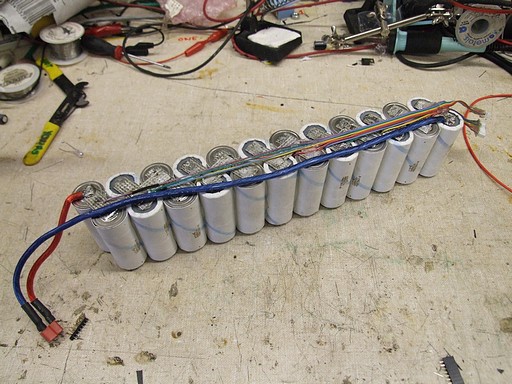 This is what the battery looks like after I ripped off the layers of soda bottles insulating the pack. There are 2 balance leads, but no actual power connections associated with them – my balance-capable chargers can’t charge through the balance connector only. So this whole pack was kind of unserviceable from the start.

It also has bare balance wires passing directly over cells, something I recently learned was a very bad idea. 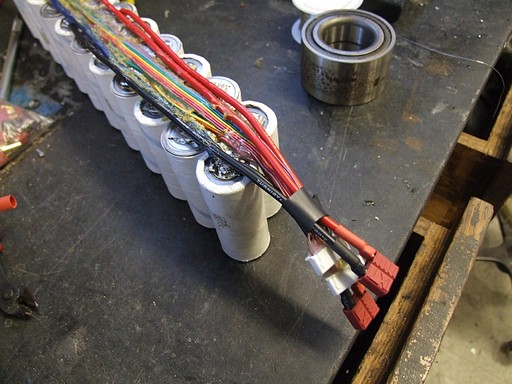 The resolution for this pack was pretty simple – add those power connections. The two Deans connectors represent the upper half and lower half of the cell. This enables it to be balance-changed by 4chan every once in a while to keep the cells level.

To insulate the balance cable better, I laid a layer of rubber cement underneath them. That will at least immobilize the wires and also keeps them, for the most part, out of potential electrical contact. Due to RazEr’s limited internal width, I couldn’t reroute the cables to the paper sides of the cell, which is what I would like to have done. 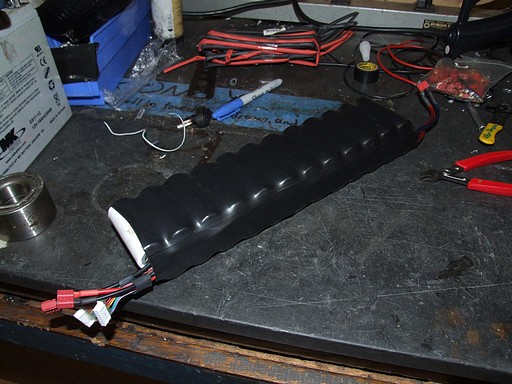 The final result, after coating with Real Giant Heatshrink!!! instead of more Mountain Dew bottles. Working with this was very refreshing – this is the massive thick rubbery PVC shrink often used for enormous power cable repair and the like. It actually doesn’t look like I threw it together in 5 minutes. 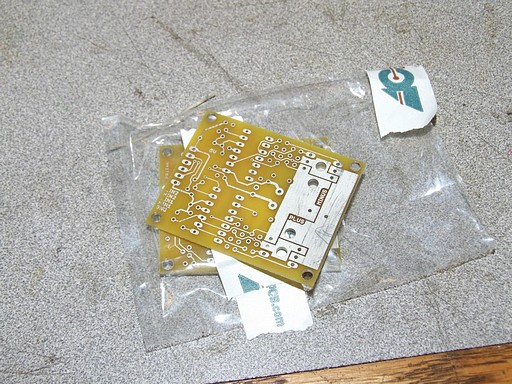 From last update, the independent-input H-bridge version of the Beast-it-troller is now ready for assembly. Both of my Digikey orders for required parts, most crucially the IR2183 gate drivers, arrived the same day. Will it work?!

I also ordered (and received, too) a spare CIM motor to replace the toasted one in the left side drive. With luck, Land-Bear-Shark will be running (…again) for this upcoming Swapfest.