You already know this is going to be exciting. But first, a video.

In accordance with my goal of bringing one random vehicle to every Swapfest, I rolled LBS out of MITERS (this time on a handcart to prevent 50-feet-away-death syndrome) once again after rebuilding the motor controllers for the nth time over. It proceeded to run the entire day without issue. Due to its more tame nature compared to things like LOLrioKart or melon-scooter, I let a few friends zip around the seller booths and parking garage on it (some of which is seen in the compilation above).

But with the day reaching temperatures of 95 degrees or so, and after climbing a dirt mound for a while – with much stalling and low speed running – and then afterwards gunning it at full speed up the parking garage ramps, the Beast-it-trollers finally gave out. 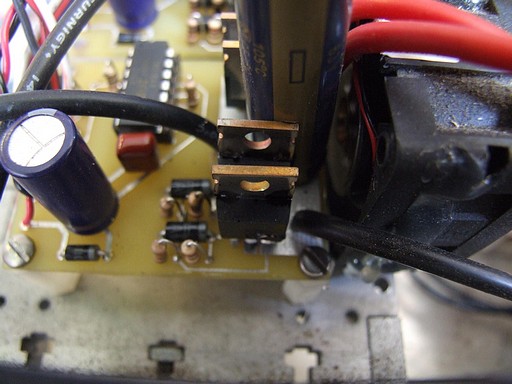 The little molten metal balls and pyrolyzed epoxy are classic signs of thermal overload failure. I’m satisfied, though, that this is probably my first real legitimate controller failure. Not some design flaw, or gate drive explosion, or being plugged in backwards, but honest-to-goodness overload. Now, if these had just exploded right away, I would have probably called it quits and left the DIY controller market forever. Maybe now I can slowly climb back up the controller ladder once more…so the next version will return to half-bridge synchronous rectification? And then I can have an H-bridge again? Then maybe one day, back to brushless!

Though with all of the molehill climbing I did, I also seem to have toasted the left side drive motor. That’s what probably led to the controller failure – the motor distinctively has the “shorted windings” feel when turned by hand.

But that wasn’t the most exciting thing that happened! 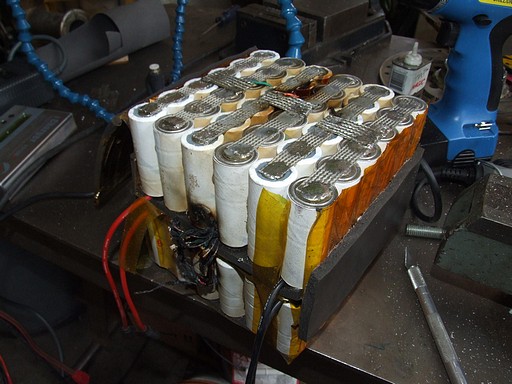 OH GOD KILL IT WITH FIRE

I wheeled LBS back to home base and pushed it off the handtruck and that’s when a majority of Hell broke loose. For seemingly no reason, massive plumes of smoke began pouring out of the frame. I figured the motor controllers had somehow failed short, but that couldn’t happen – I had already removed the key switch. So the next logical conclusion was BATTERY FIRE. However, the smoke did not smell of burning lithium battery electrolyte – it was purely wire smoke. I began pulling the thing towards the nearest door anyway in case it ever decided to transition to lithium battery electrolyte. By this time, the rate of smoke production had almost tapered off, so I just started removing the skateboard top instead.

It seems that the entire balancing harness shorted and caught fire. My assessment is that because I transported LBS upside down on a handtruck, the unrestrained battery pack mashed the balancing connectors and abraded the wiring down to the point of shorting. It would only take one short between cells to cause massive heating because of the cells discharging, and subsequently it would spread to the wires around it by melting the insulation. 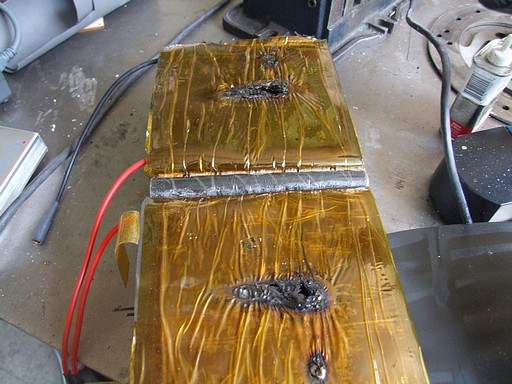 The heat was enough to destroy the kapton insulation wrapping. 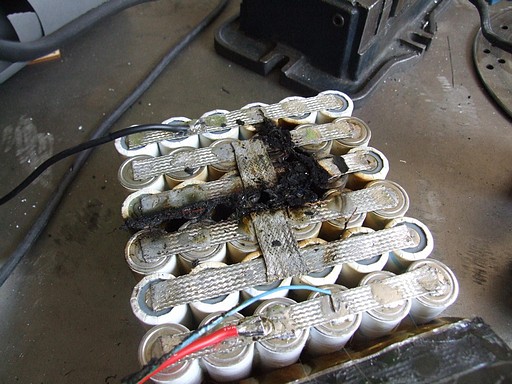 Flipping the cell bank over to the side where the individual wires were consolidated reveals the “flame trail”. Looks like the lower 4 cells shorted on the two packs. 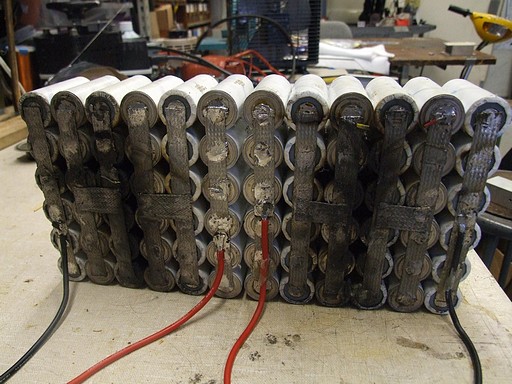 And the packs after some selective surgery to get rid of hanging bare wire leads (and a little bit of brushing). The cells themselves seem to be fine – which I would imagine, since it’s really hard to kill an A123 cell using a 22 gauge wire. All cell voltages were checked and they seemed to be consistent with a pack that was just used intensively with cell voltage between 3.3 and 3.4 volts.

So with pretty much all aspects of the tank now out of commission – controllers, motor, and batteries, I think I’ll temporarily declare this thing “done” for now since a full restoration is now going to need alot of effort. Maybe it will be seen again when the snows come back in the winter…

2 thoughts on “The Fiery Demise of the Land-Bear-Shark”