Hello Internets! If you want the latest about what’s going on with this design (since this post is kind of an awkward in-the-middle post where nothing is working yet), see the EQ category here. 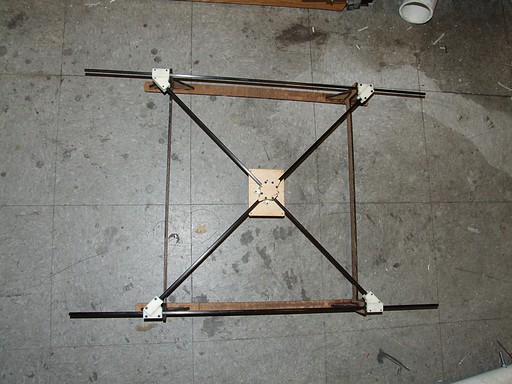 No, it doesn’t fly yet. Quit asking.

I basically spent the better part of a day putting together the entire frame and placing the components. Given that everything was rods-and-joiners, this process did not take long at all. The hard part was actually making sure things came out square (or 45 degrees in the case of that X). I also made a center coupler for the X that also mounts the flight controls. The coupler increases the torsional rigidity of the frame signifiantly by forcing the crossing rods to be a constant distance apart. 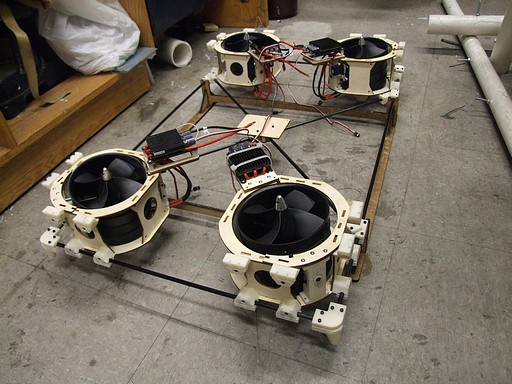 Not really. In this picture, I’ve slipped the 4 fans on and aligned them pretty exactly according to the models. I cut the rods pretty exactly to length – tolerances of maybe +/- 1/16″, so overall the thing is very square.

The weight of the fans is causing a bit of upwards bow visible in the carbon fiber rod. That will be fixed once the ‘upper level’ is added. 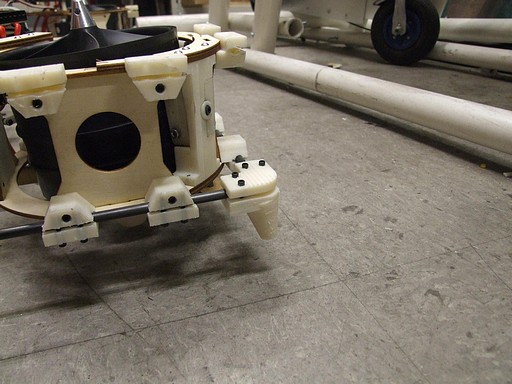 Here are the cute little corner landing legs, still incomplete. Ultimately they’ll just have a section of carbon fiber tubing embedded in the hollow conical point, upon which will be impaled a nerf ball or similar squishy ball-shaped thing (no, not Ballcopter) 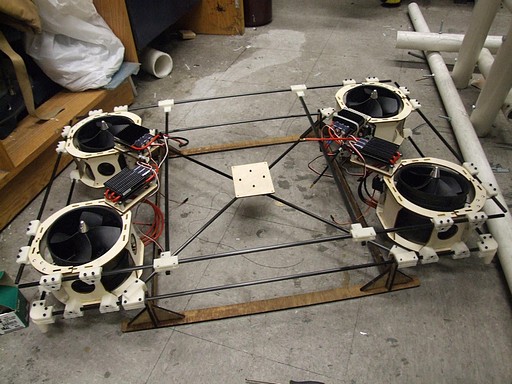 The second ‘level’ has been added, including the battery hangers, so now the frame is much stiffer. It’s still lacking in the torsional rigidity department (i.e. if I grapped each end with 2 fans and twisted), but that’s a given since the upper and lower rails aren’t really joined at all, and the CF tube is still somewhat flexible. Since this thing should never be picking itself up by 1 corner, I don’t think it’s problematic. I have, however, considered just cutting out a long balsa or lite-ply plate which bridges the long center gap between the tubes. 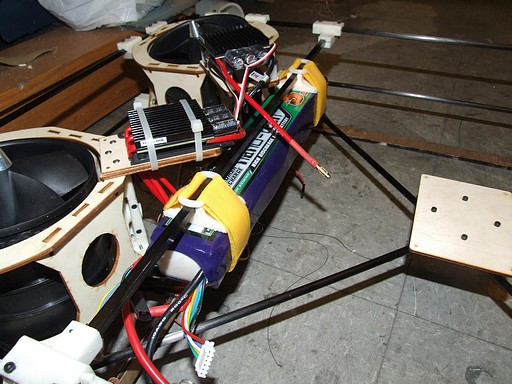 I really like my battery mounts here. They’re Velcro cinch straps from McMaster, and are perfect for things like hanging a not-too-heavy battery in a not-too-solid manner. Little flat 3d printed feet give the battery packs a surface to be aligned on, and also hold the nylon straps from falling off sideways.

Most important of all, they’re adjustable side to side and the rail itself is adjustable front-to-back. I’ll need it when I’m trying to balance this thing. 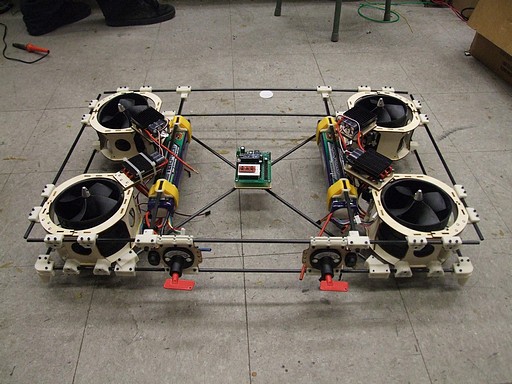 And here it is, with appended Arduino carrier board and a Razor 6DOF IMU appended on top of that. What’s missing? Well… everything else. The heavy power wiring needs to be added still, and then oh god the software.  The total weight in this picture is exactly 8 kilograms.

I probably just made some Aero/Astro folks cry there, but with all four fans hauling, I have 8 more kilograms to go.  (Okay, so realistically like 3 or 4!) 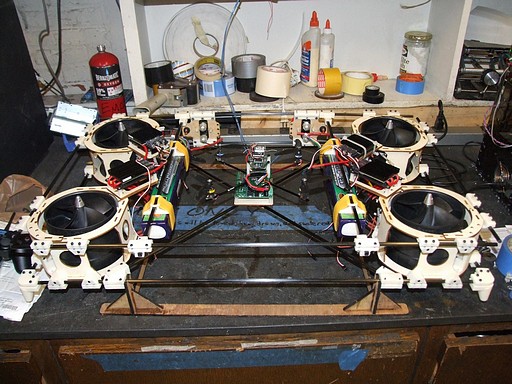 Can you spot the tiny quadrotor?

A visitor from Physical Sciences Inc. dropped by MITERS with that cute little thing in the center. It’s adorable…and exceptionally stable for something so small. I hope this contraption works…

So let’s see, what have I actually built compared to what I wanted the Land-Bear-Shark to be?

I am proud (…?) to say that now it has been reduced to forward-only with coasting. And radio controlled…..barely.

After the last update, LBS kept blowing through motor controllers (sound familiar? Only all of my vehicles ever do that). For some reason, the signal-side and gate drive problems were never resolved, and the gate drive chips kept failing short. Their inputs simply became low impedance for some reason, causing the microcontroller pin voltages to no longer change sufficiently to indicate a shift in logic state. The outputs would also some times randomly die, but there was never a power semiconductor failure. That means I’m getting somewhere, right?

In any case, LBS was going to premier at the last Swapfest in June. Literally the morning of, I tried riding it to the event….and made it about 50 feet out of MITERS before the left side drivers gave out. Dragging that 70 pound brick back to the shop was unpleasant.  Then in late June, along with my partner in engineering malfeasance Amy, I replaced the drivers (again) for a joint “demo event” to staff in the Mechanical Engineering department. This time, I made it all the way onto campus and around some building. But once again, in the middle of blasting around in the hallways, the right side quit this time.

Derp. At least I had a pushcart to transport it back this time, because I was just going to leave it in someone’s office otherwise.

After that failure, LBS sort of sat on a stand at MITERS, taking up space until last week… 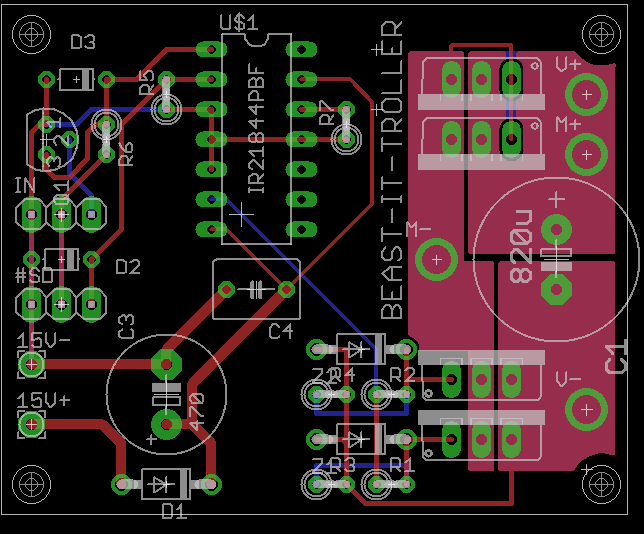 Clearly, I just needed a new start on the motor controllers. I didn’t care any more about regenerative braking, reversibility (standing on the thing while spinning in place is actually really hard and taxing on the motors), efficiency, brushlessness, or anything. I was just going to rig up a single-quadrant forward-and-coast-only controller. The most bone-simple thing you can build that can control any reasonable amount of power at all. This controller has been called Beast-it-troller because it’s time to just beast something.

This controller is a single low-side pull-down configuration. The reason there are “upper side” FETs is because they have been coerced into acting as diodes by bridging the gate and source leads. This acts as a flyback diode for the motor. The single low-side configuration is vulnerable to uncontrollable latchup failure.

Now, doesn’t that make you comfortable? Regardless, it’s dead simple and ran LOLrioKart for almost a year.

I designed it in about one hour and had the board files immediately sent to Advanced Circuits for fabrication. Their quick-turnaround basic service is reasonably cheap and great when you need a board…………….right about now. 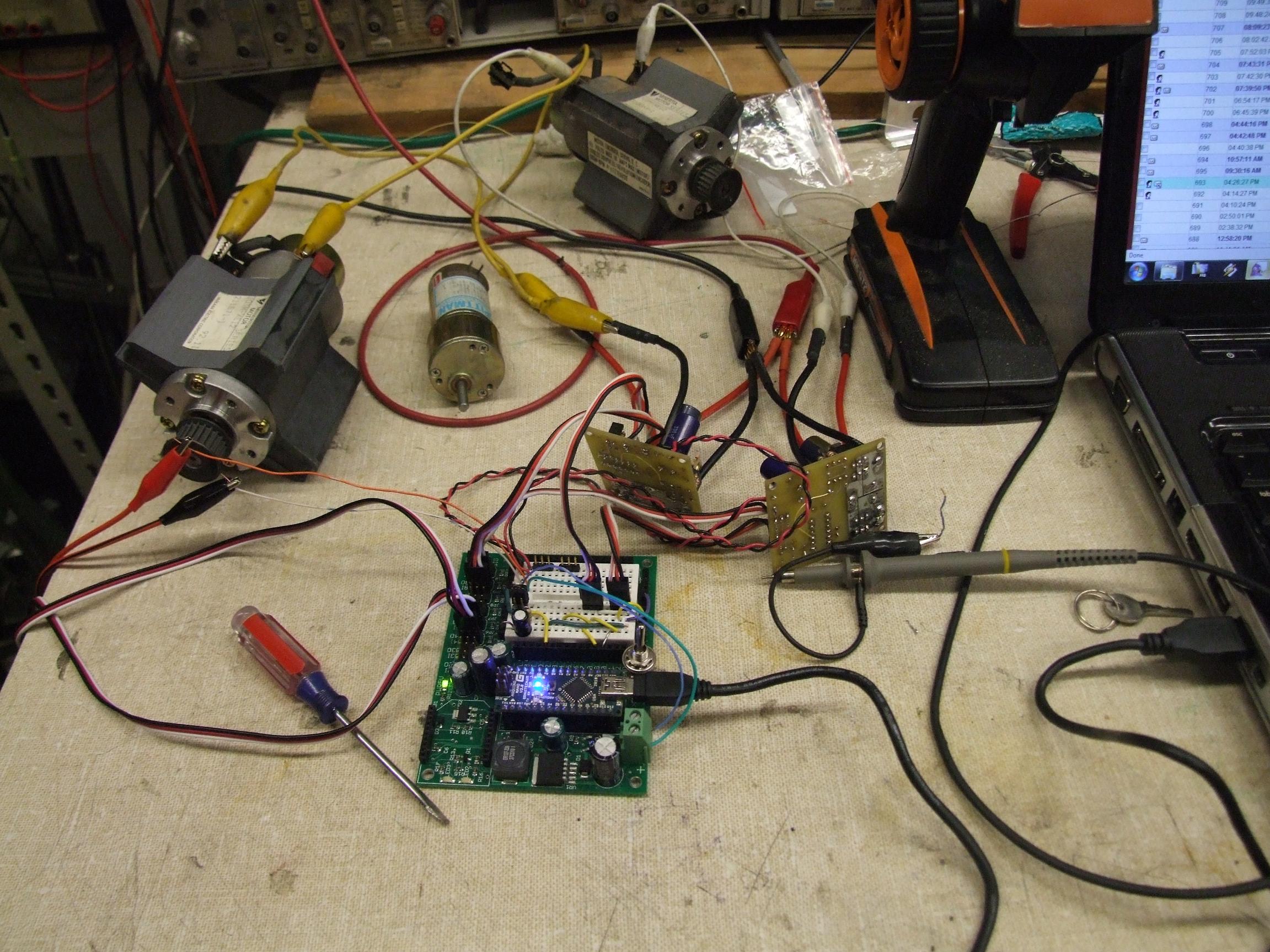 I decided to totally gut the system wiring and start over, too. While I had all the components dismounted and unwired, I decided to do a full bench test on a current limited power supply. The code was knocked down to the barest functionality needed to go forward or do nothing. The dummy loads here are some adorable small Minertia servomotors picked up off a free stuff list. 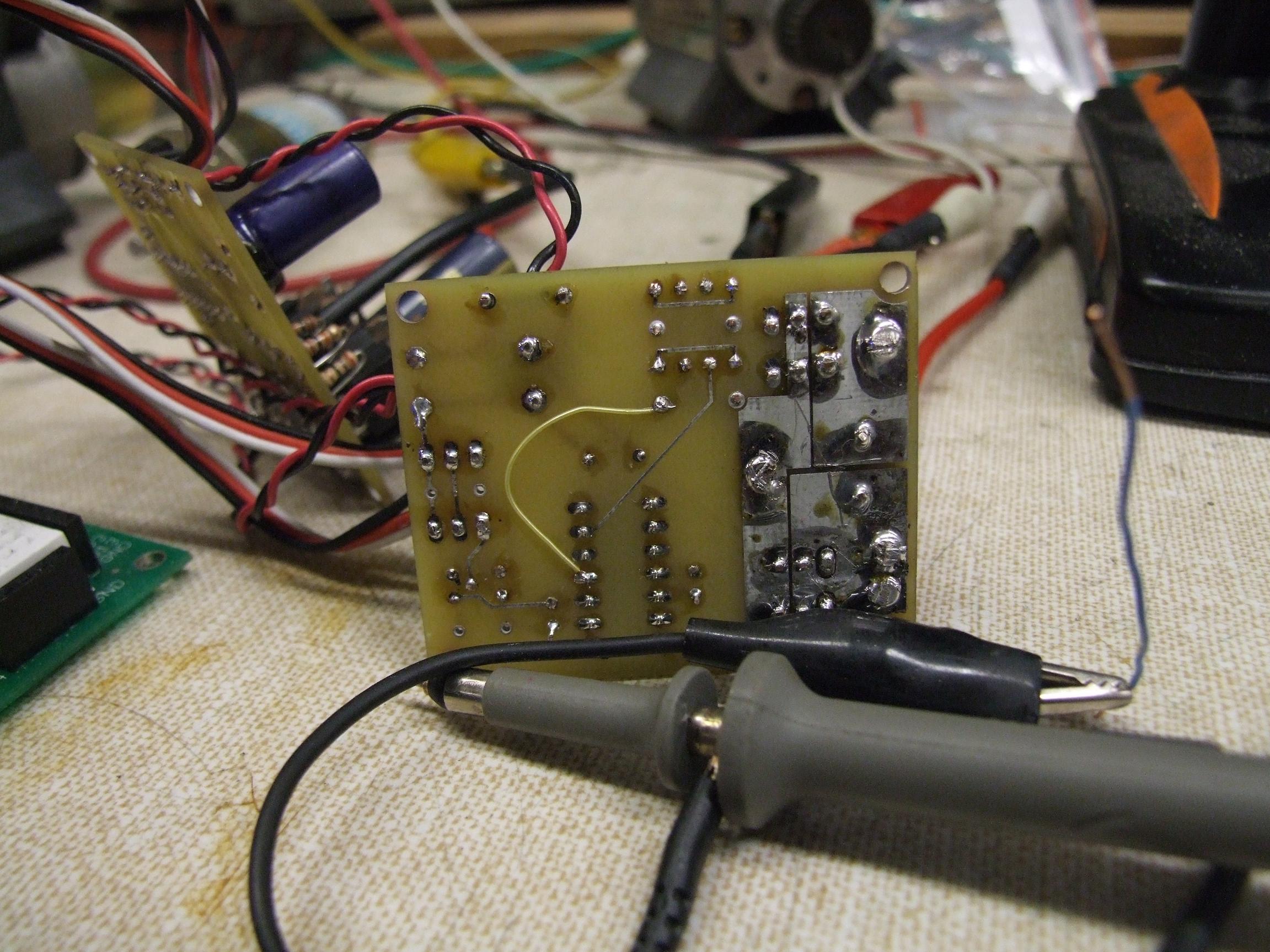 A board designed in an hour probably has bugs and numbskull errors, and this was no different. Like every controller I’ve ever built (ever), it needed a Little Blue Wire hack. I neglected to actually route the MOSFET source pin (power side ground) to the gate drive IC’s gate return pin (signal side ground). While the grounds are in fact connected elsewhere, so it wasn’t the end of the world, having the gate drive return current come through a few extra feet of wire would have introduced noise into the system.

After that, it just kind of worked. It’s hard to get this type of controller wrong. 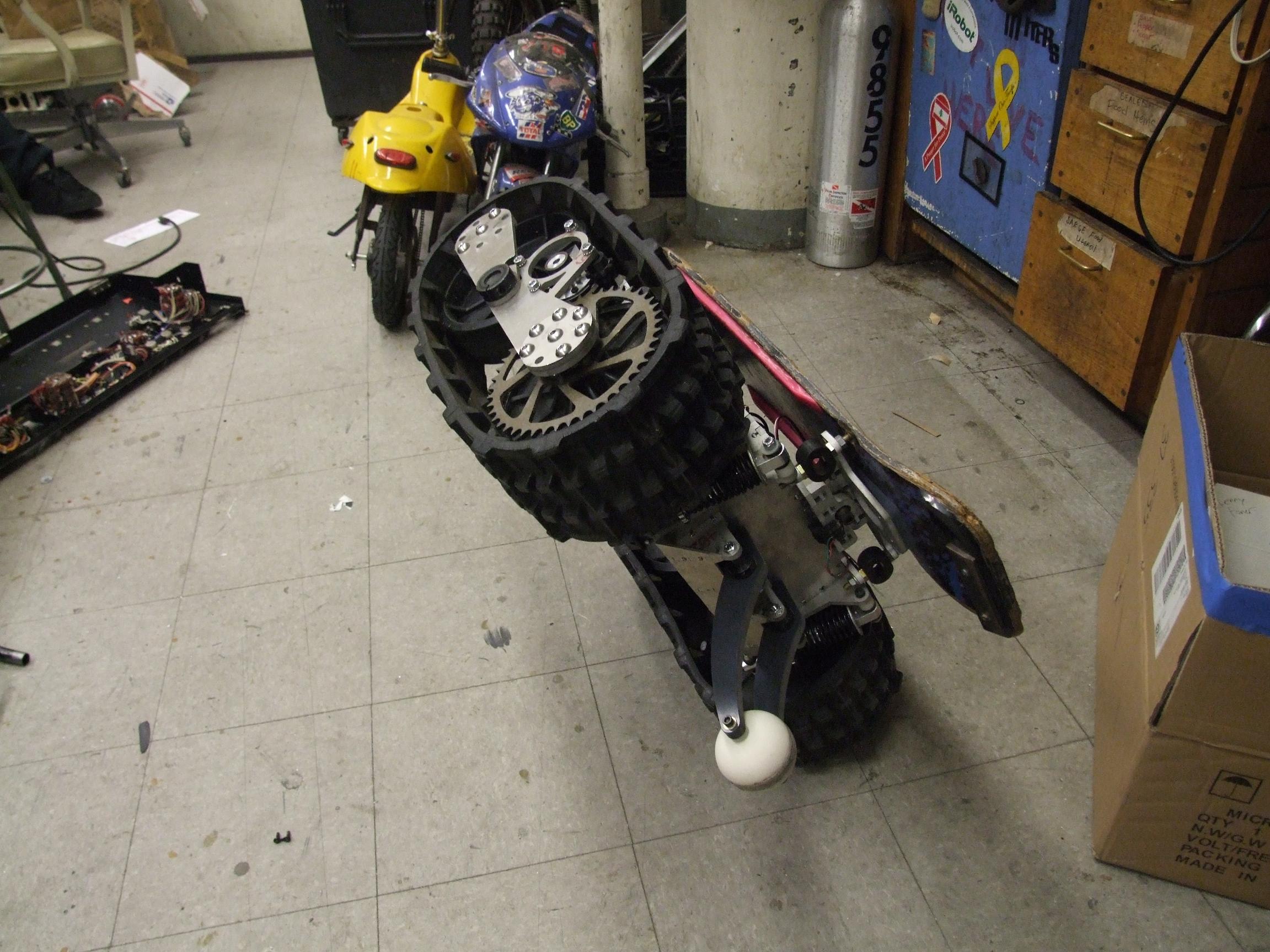 I also discovered that this thing has a very unique and convenient self-balancing service position.

The downside of the fowrard-or-bust control is that turning with a short radius is less predictable and more finicky, depending strongly on the available drag on the slower tread. It’s also almost impossible to turn in place unless I shift way back and keep most of my weight on the ball tail. However, larger radii and sweeping turns are no problem.

Guess what? July Swapfest is tomorrow!

7 thoughts on “A Quadrotor-shaped Sculpture, and the Continued Tragic Goals Reduction of the Land-Bear-Shark”