So I have been quietly working on quadrotor business for the past week and a half after Ballcoptering from 3000 miles away. All four of the thrust modules are done, due in part to Make-a-Bot logging something like 70 or more hours of cumulative operation during that time alone. There was also a little bit of work done shortly before I left, so this post will recap all of that. I’m fairly confident I can get this thing making an ungodly racket by the weekend (those fans are LOUD) if not a controlled and scientific one. 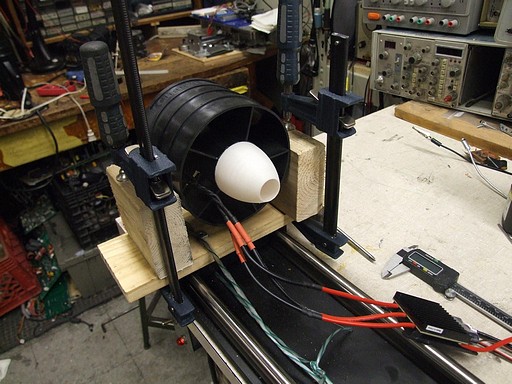 Speaking of science, I actually got the chance to put one of the tailcone-equipped fans onto the Fankart Rail for a real honest-to-robot-Jesus instrumentation session. I was curious to see how addition of the smooth cone surface would affect the thrust output of the fan – since without it, the motor ends bluntly. Given the exhaust velocity of ducted fans, I was expecting a difference of a few ounces at full throttle. 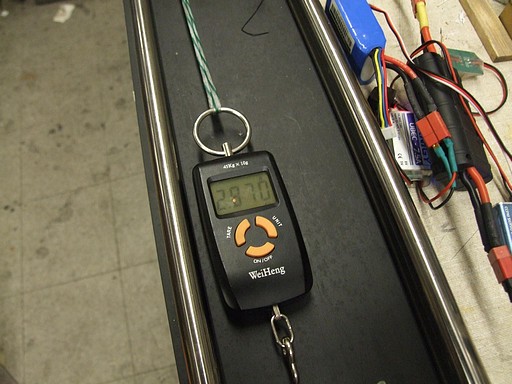 I think my expectations were in line. Using the same 10S lithium pack as last time, I got a maximum sustained 2.97 to 3.0 kgf of thrust. The pack dipped to 31.5 volts during this time. The results do closely match last times – 31.1v minimum and 2.85 kgf.  I didn’t get a RPM reading this time, however, and that extra 0.4 volts might well account for the difference.

But if that is not the case, the tailcone appears to net me back around 100 grams or so. Not that significant, but regardless it adds to my aero/astro cred, right? 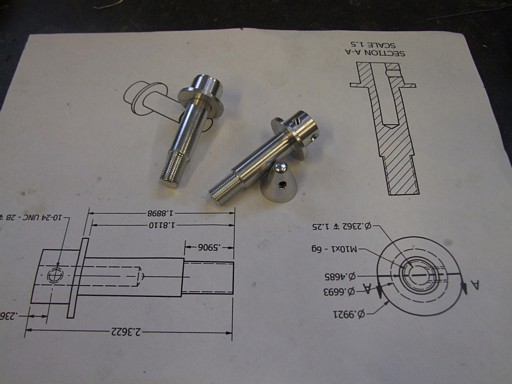 It turned out that one of the stock 5mm adapters that I had reamed to 6mm was still way out of round. That’s how horrible they were to begin with. I didn’t have a small enough boring bar (that went deep enough, anyway) so I had to make do with a 6mm reamer. It probably just followed the path of least resistance anyway –  I didn’t mark the parts to distinguish them, but one of them was distinctly rushed.

To resolve this, I elected to just duplicate the most important dimensions on the stock part and make one myself from scratch. It worked well – while I couldn’t find a lathe which could turn metric threads (and did not have a 10mm x 1) die, 26 threads per inch is close enough to 25.4 (1mm pitch) that the prop nut was able to thread on enough. 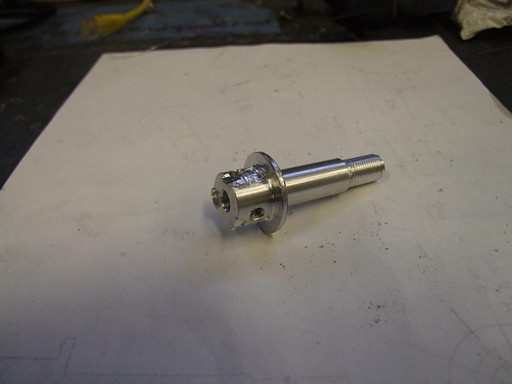 I also managed to destroy one of them instantly when I forgot that I couldn’t thread at 600 RPM.

Oops. Luckily, I only needed one.

However, ultimately the effort was for nought – the one that I didn’t destroy was improperly reamed out to 0.238 instead of 0.236 (6mm). The other one was left at 15/64″ (0.234″) and it turned out to be a snug fit on the motor shaft. For some reason, I went for the loose oversize fit on the second because there wasn’t a 6mm reamer. That 0.002″ of radial play translates into OH GOD WHY DID I EVEN BOTHER at the end of the prop adapter once everything was tightened down.

So discovering that I can no longer Course 2 properly, I borrowed Shane’s prop adapter.  :< 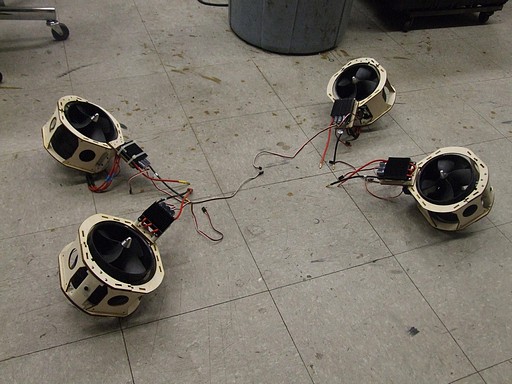 After many hours of scraping 3d printer droppings, here are all 4 thrust pods completed!

The upper left controller is zip tied on since during my trip away, someone knocked the module off my shelf, breaking it into a few pieces, some of which was the Turnigy controller’s mounting flanges. I had spares of the wood parts, but still. Not smooth, bro. Not smooth at all.

At least they piled the wreckage very neatly back on my shelf and proceeded to not tell anyone. 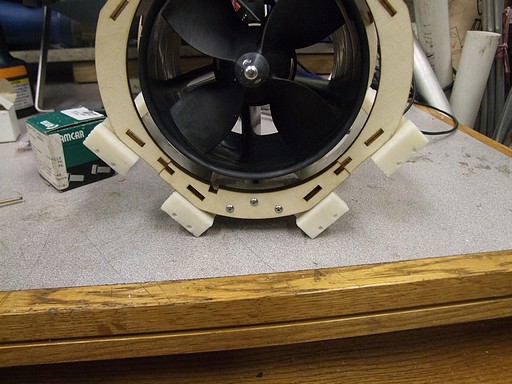 I had to print a total of 32 of these little corner joiner things, in batches of 9. Pretty easy, right? Yeah, each batch took 4 hours and I had to make 3 more sets after discovering that some were done in the wrong orientation (where the lamellae of 3d printing are stressed in their weakest direction). Oh, and one set died mid-print, so that’s one more. 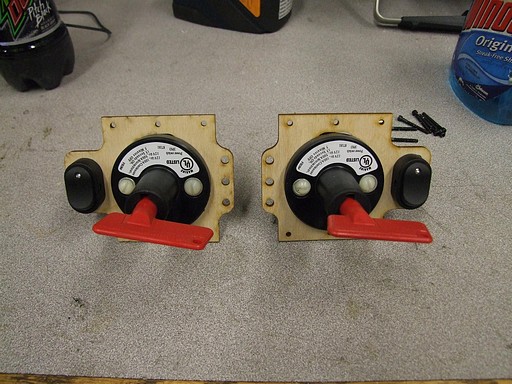 While I was staring idly at the printer, I whipped up these switch panels. They’ll attach in between the upper and lower set of frame rods. This thing will have a front and back power system, since otherwise I’d be facing very long wiring runs. This setup doesn’t necessarily weigh less (in fact, the Hella switches are about 4 ounces each), but it simplifies the wiring somewhat. Each battery feeds 2 controllers directly instead of all battery wires coming together and then branching off again. I also get the benefit of redundant 5v BECs, one from each battery. The small switches are designed for precharge circuitry, allowing the logic to be powered without main power application (and also not beating the controllers in the face with all 40-odd volts of the battery at once).

I’m actually going to try a very unconventional arrangement for the master power switch. Because the Hobbyking 10S batteries are actually 2 discrete 5S packs with a middle “bridge” connector, I’m going to wire these switches such that they open and close that middle bridge. This should, in theory, split the battery into those 5S packs with an isolated center, allowing me to charge them with a single 4-channel charger. I have yet to work out all the implications of this, but it SHOULD work. 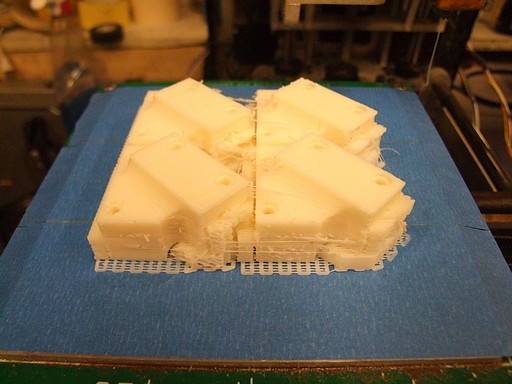 So here’s what a batch of parts looks like fresh off MaB’s print bed. It’s covered in stringers, little noodles, and support lattices which are also extruded ABS, so some degree of knifework and sanding is required to clean the parts up afterwards. These are the joists for the center truss. 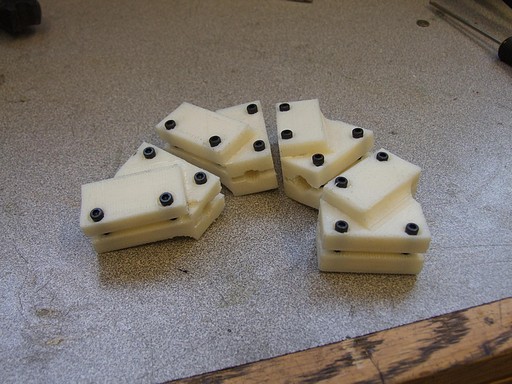 But this is what they look like after they’re cleaned up! 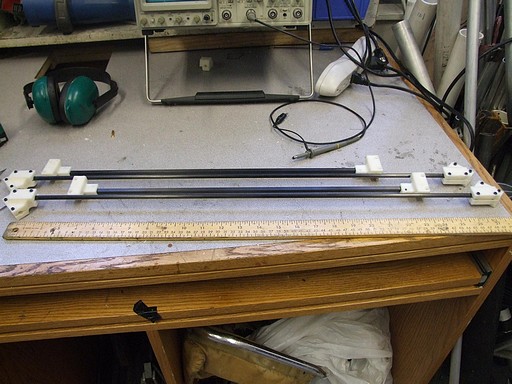 With these important pieces complete, I could start cutting carbon fiber tube to length. The right angle pieces also shown here are the (+37) Rails of Battery Mounting, which are actually made using square CF tubing.

I couldn’t assemble the entire frame, however. I didn’t design any means of landing this thing safely yet, and putting the frame together would have meant that the motors were sitting on the tailcones. Probably not good news, and definitely not good if I want a remotely aligned frame. 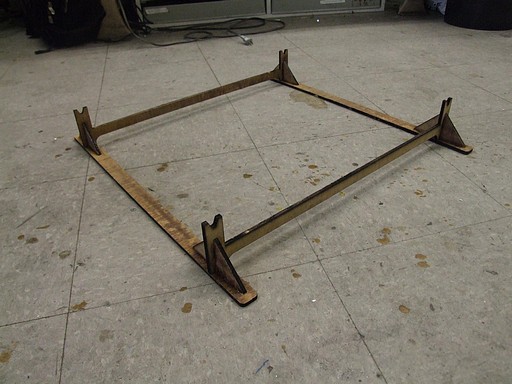 So I made a frameholding jig for the time being. Its only purpose right now is to create a place I can safely put the quadrotor down on.  This is not landing gear, though it’s of the right shape and not very heavy, so maybe it could be pressed into the task. This little thing is made from laser cut 1/4″ cheap plywood. The V grooves seat the carbon fiber frame tubes, and the distance between towers is also exactly the distance between the joists of the truss.

To come: Putting it all together!

I already received the ultrasonic distance sensors and the IMU, so after frame assembly I should be able to move quickly onto master power wiring. Otherwise, this thing is mostly plug-and-(program-and-test-and-)play.