Alright, so the last test of the RazErblades ended in a mild disappointment as my shoddy metallurgy brittle-failed under load. Personally, I don’t blame it – I might as well have put the metal together with center punch dots the way I speed-brazed the thing together. No matter – a chance to rebuild the frame is also a chance to optimize the frame geometry for better component placement. As I was entering a dead week of waiting for parts, I took a few hours to think about the new frame design.

I decided to go back to using my classic T-nuts and slots method of building, just because everything goes together so quickly using it. For well-constrained structures with lots of fasteners, it’s also fairly strong. 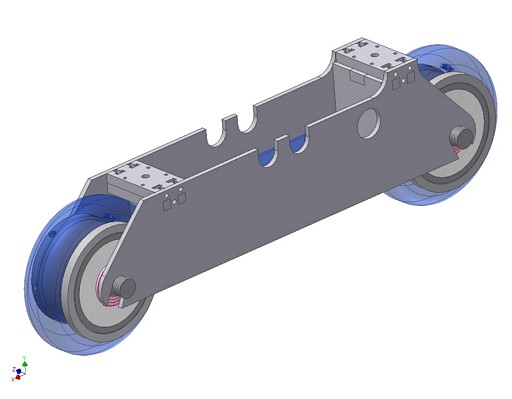 This is the updated rendering of the frame after a few hours of speedCADing, with few structural T-nuts designed in. Most of the changes are to minor aspects of the design that will have a substantial impact on the way the electronics sit inside the frame and the integrity of the motor mounting. 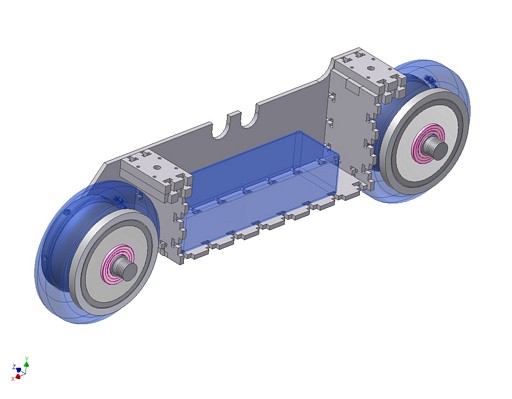 Now with more T-nuts! As mentioned above, the internal cavity is much taller. In fact, it’s almost twice as tall as the 6S battery now.

Oh, yes, one more thing. I’ve made the cavity 1 millimeter wider to let the battery slip in without requiring… you know, additional machining. The ends of the wheel shafts will be shimmed slightly to account for this.

There is now certainly the possibility of switching to an even bigger battery – 22.2v and 2.6Ah is already quite substantial to stuff inside, but I’ve been shopping for 3AH and larger packs on Hobbyking. Unfortunately, they all seem to be much wider than the 40-42mm range, which isn’t helpful. Laying the cells sideways would increase my “width capacity” to 46mm or thereabouts, so that’s a possible solution. 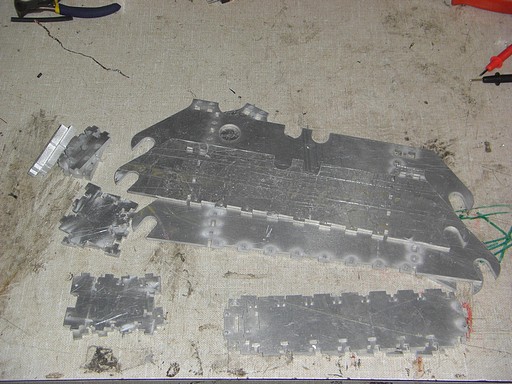 Not everyone has abrasive waterjets on call at the tap of an ID card. Fortunately, optimizing of designs for waterjet machining (for myself, mostly out of laziness) is complemented by new online manufacturing shops that will take your flat parts drawings and lets you purchase the parts cut in different materials.  It’s one version of the PCB-fab-but-for-MechEs that I want to see more of, and believe will be key in aiding the United States’ manufacturing industry while encouraging the DIY technical arts, the TE part of STEM, and makerdom as a whole.

But enough soapboxing. I keep plugging Simon’s abrasive waterjet (and LASER!) service Big Blue Saw because he and I go way back and are homies. Isn’t that right, Simon? 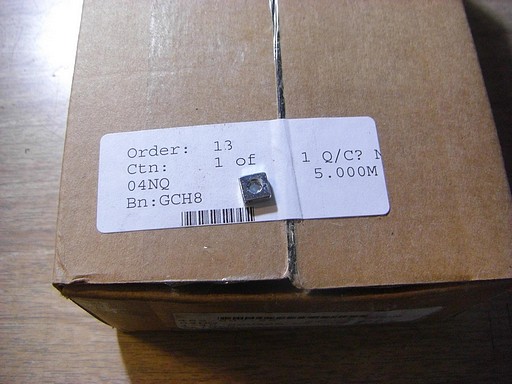 The way I fasten all this stuff together is with square machine nuts. Überclocker and Cold Arbor are both chock full of 6-32 and 1/4″-20 square nuts.

1/8″ thick material is a difficult one to size up square nuts for. Even a 6-32 nut is far too wide to be useful – it can be done, but it’s excessive because of the amount of overhang at 5/16″ wide each. A 4-40 square nut is generally 1/4″ wide, which is far more palatable. But there was a problem: McMaster, my go-to guys for hardware, don’t stock any kind of 4-40 square nut. I was concerned, because that meant I was potentially spec’ing out hardware which didn’t exist. I mean, if McMaster doesn’t carry it, why should it exist?

A search through the Intergoogles took me to Amazon of all places (seriously, did you know they have a whole industrial components division?), but unfortunately all the 4-40 square nuts came in packs of 5000.

That’s alot of nuts. In fact, it’s 7 and a half pounds of nuts. I decided to press forward and bought a pack, figuring I would never, ever need to buy these things again.

hey mcmaster, you should carry 4-40 square nuts in packs of smaller than 5000. 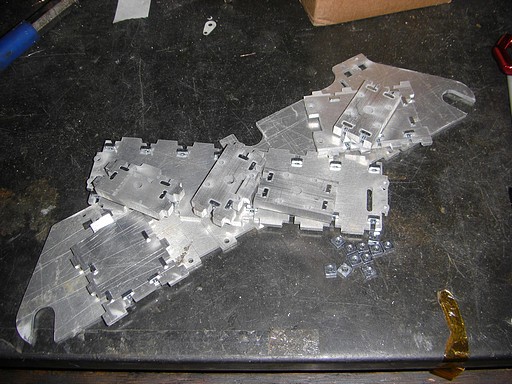 And here are the new plates all loaded with square nuts, ready for fastening. All the screws are standardized to be 4-40 x 3/8″ long socket head cap screws.

And the “version 2″ frames assembled, but without hardware. I still need to modify the top 1/4” aluminum mounting blocks slightly – they need clearance holes for 4-40 cap screws to go all the way through to the second layer. Both layers also need the center hole tapped for a M6 x 1 thread.

Hopefully, my custom magnets from Super(custom)MagnetGeorge will arrive soon, so I can get to some 4 wheel drive testing. Adding 100% more motor will make a world of difference in terms of handling.