Hey Maxon Motors, I’m the #1 Google hit for “Maxon DEC Module”. How many sales have I been responsible for?

What if you told me there exists a brushless DC motor controller about the size of a large postage stamp that was sensor commutated, took an analog 0-5v input, functioned up to 50 volts at a maximum of 10 amps, had built-in current limiting and its own internal logic power supply, and can be easily hacked for more power?

Well, that was pretty much my reaction when I was told about the Maxon Motor DEC 50/5 module. 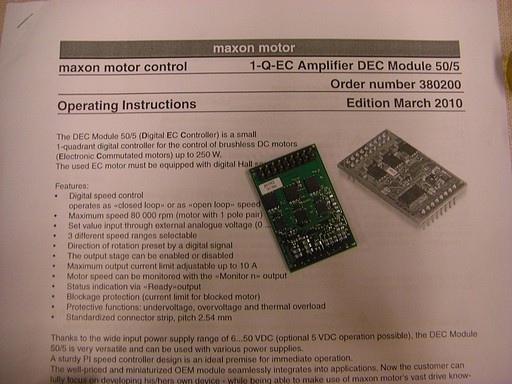 It’s everything I just described, and is my new favorite vegetable.

I really despise model airplane controllers. They’re great for their application – spinning a modest, largely invariant and predictable load. This is completely incorrect for an electric vehicle, which has a much more demanding and dynamic load profile. Sensorless commutation is fine for a propeller, where the motor can twitch at will, but it leads to a real chicken and egg problem for a high inertia load like a vehicle. If the motor can’t lightly move to generate a back EMF profile, then it doesn’t know which direction to apply torque in. And low speed performance is often chaotic and jittery.

So for a while, I’ve been praying to Robot Jesus and Co. for something the size of a model airplane controller that had sensored commutation. I was willing to give up significant power handling for sensors, since it takes much less brute motor strength to start a vehicle moving if the motor is actually utilized to its full potential.  Maxon seems to have answered the call with these DEC modules. The 50/5 appears to be the latest in a line of very small and low powered controllers. 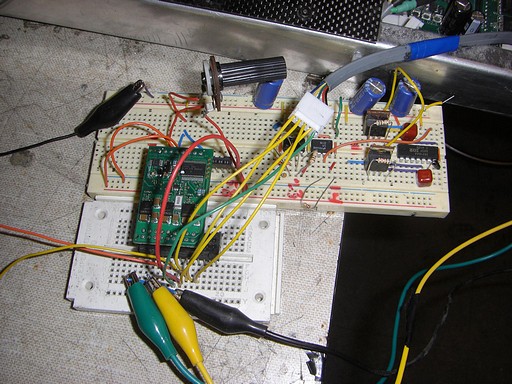 Maxon provides a very helpful and thorough datasheet with the DECs, so naturally we had to set up the included basic test circuit.  The module requires minimal support to function – power, ground, three Hall Effect sensor inputs, 3 phase outputs, an analog throttle input, and two configurable digital inputs for setting closed-loop speed control. It provides logic and Hall sensor power internally, and can take an additional analog input for current limiting if your desired current is not “ALL OF IT“.

The form factor is not exactly helpful for breadboard use. It spans more than 1 breadboard’s worth of rails, so it got straddled across two. Next, the dual header had different pin functions on adjacent rows, which means that had to be split between two sides of one breadboard.

Now, how did that happen? 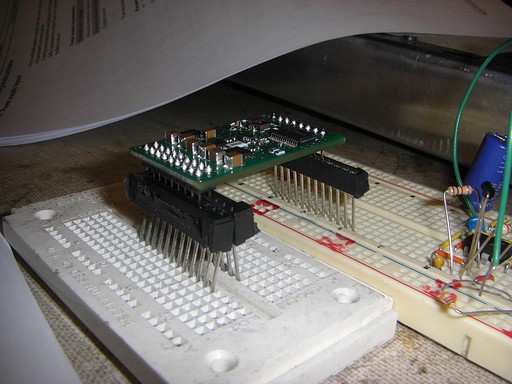 Somewhere in Switzerland, a Maxon engineer is probably crying over this picture.

Yeah. Those are wire-wrap IC sockets cut in half, sanded down, and bent over. 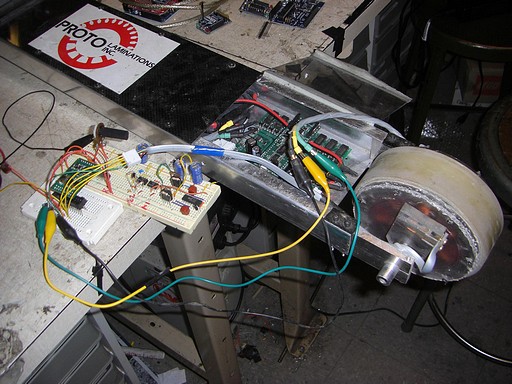 The BWD Scooter’s drive motors are about the most normal BLDC motors you can imagine, so they were selected for testing. It took a few tries to get the 3-sensor-and-3-power wire combinations correct, but here’s some observations about the DEC:

I guess the datasheet spells all that out, but I’m just saying that it doesn’t appear to be lying :>

Through some part number trickery, Shane found that the small SMT FETs used are Infineon chips that have an on-state resistance of just under 6 milliohms. They don’t really have the thermal mass (nor the board any real thermally optimal properties) to be pushed significantly harder, but I think they can realistically handle 15 or so amps continuously, with no additional cooling. This is assuming a 100 degree Celsius device temperature, a 7 milliohm resistance at that temperature, and that the stated 50 Kelvins per Watt thermal impedance is accurate.

With additional heatsinking, which ought to be effective due to the thinness of the package, these modules can probably be pushed to 20+ amps. Past that, there’s always the Cheap Shady Chinese Small ESC Manufacturer Hackaround of soldering surface mount FETs on top of eachother. I think the effectiveness of this method just exponentially approaches some asymptotic amp limit.

Either way, to do this, the onboard current sense resistor (which sets the 10 amp built-in limit) needs to be bypassed. It’s a 10 milliohm, 1% tolerance SMT resistor. I normally just neuter my controllers of current sensing completely, but I’ve found that this some times gives unpredictable and fiery operation, so perhaps it’s just better to trick it into thinking it’s putting out 1/n the amps instead, where n is the number of times you parallel the CSR. 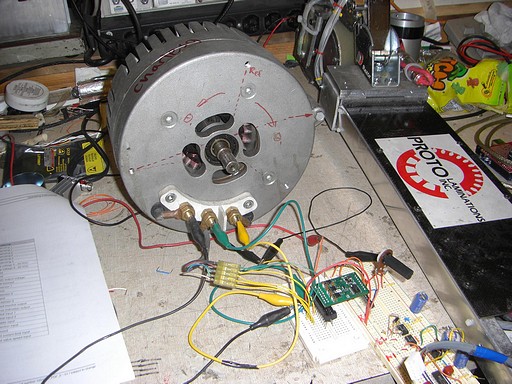 Yeah, so I said something about crying engineers… Video of the brushless Etek.

Of course, there are disclaimers. It’s running off a power supply which stops at 5 amps. If I actually tried this with a battery, the DEC would probably have grenaded before it noticed what was going on.

Here’s a video of  That Other Thing We Should Try.  The DEC module sensor inputs are hooked up to the scooter rear wheel, but the drive outputs are connected to the Etek.

I see absolutely no practical purpose for this arrangement. It was late at night.

This was the controls breakthrough I was seeking for the skates project. They’re small, sensored, and not very high power. They even directly interface with an analog input, so I can skip having an onboard microcontroller – XBEE radios have an “I/O” mode that lets the units be used in simple wireless sensing applications.

With my newly attained Mad Skillz, I’ll craft up a carrier board which has support equipment for two DECs and an xbee. I’ve already made a footprint for the DEC modules, but haven’t actually tried laying a board with them – still getting used to the pin and footprint naming convention of Eagle, so I might modify it for more legitimacy.

is can has bldc motter tiem