If I could say that MIT has made anything very painfully obvious to me, it’s that all mechanical engineering projects are spoiled by their electronics components. We can observe the phenomenon in any Course II class which focuses on producing some integrated electomechanical contraption. Invariably, the project is delayed or left unfinished because the electronics or software did not cooperate or had to be rebuilt… over and over and over and over.

Now, I still think software sucks (and Arduinos are therefore the best thing to ever happen), but one of the things that I’ve been “meaning” to do for a long time is printed circuit board design. I’ve had a propensity for electronics design for a while, as illustrated by the many Kartrollers, Segfault’s controller, and the disproportional amount of Course VI classes I’ve taken, but the vast majority of my work has been on breadboards, wired point-to-point, or using protoboard. It would be great if I could whip up an idea and have it housed on its own specially-designed PCB, which would have been layout-validated and checked on the computer so I *know* I didn’t put everything in backwards. But the protoboards and breadboards have always been there, and everything I make is a one-off anyway, and PCBs take a long time to make and are expensive if hired out… so it’s been fine.

But I thought that PCB design was the last hurdle to overcome before I’m actually able to take one of said electromechanical integrations and develop it from start to finish. No more being impeded by the other half, especially because now I at least know my way around electronics design and execution, even if I still plug things in backwards and short things with oscilloscope probes. Like countersunk cap screws and chamfered edges, a customized PCB just makes a project that much more professional-looking… and functioning, since there are less of a chance of making airFETs.

I’ve been playing with Eagle for a while, and have even made some halfway decent schematics with it. But what I haven’t done is actually go from schematic to board. I didn’t pay attention to packages, board footprints, or any of that. 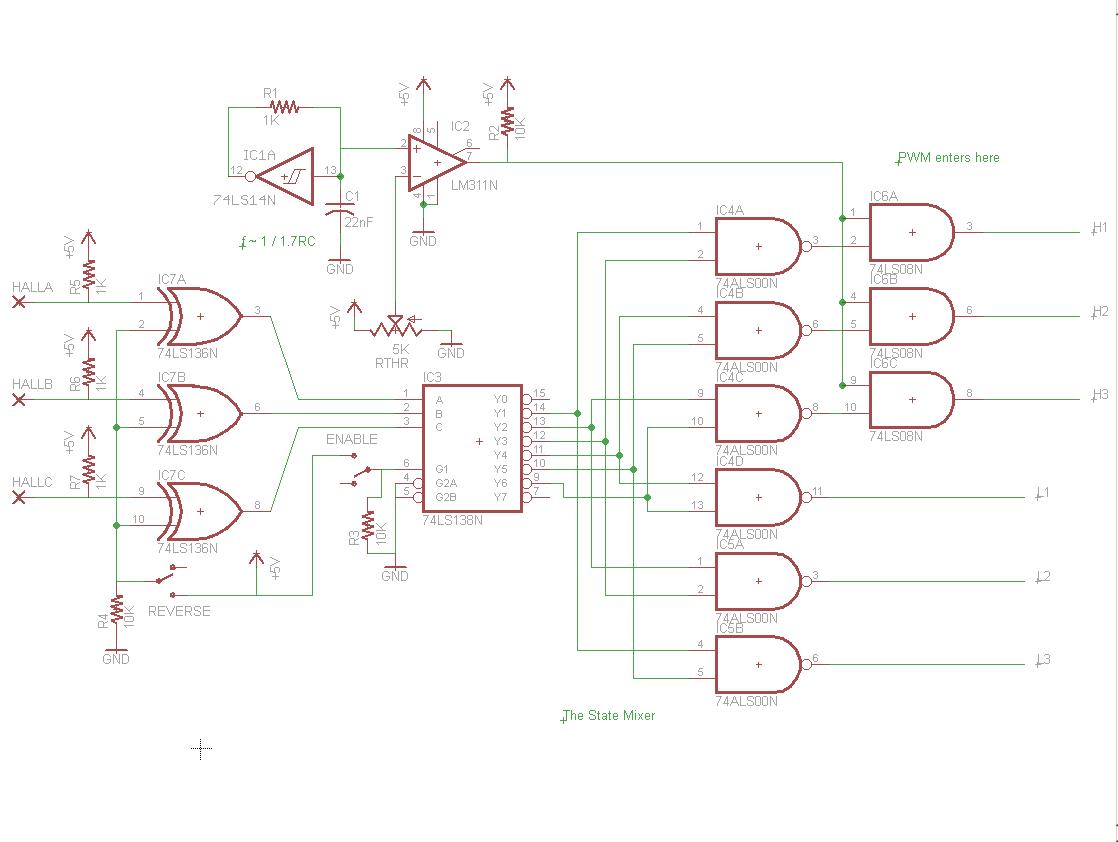 So, in a Mountain Dew-fueled rage (Dew-colic)  a few nights ago, I finally sat down and explored the things which make Eagle physically relevant.

it has the worst user interface ever.

But once I got over the fact that essentially no commonly used keyboard shortcuts or mouse motions did what I thought they do, and found where parameters could be changed or adjusted after looking in the most cryptic of places and clicking on the many nondescript and  untagged buttons, it was pretty straightforward.

can i have a copy-paste function that doesn’t take 5 feet of cursor motion and 8 buttons to do?

Also, mouseclicks associate with commands and you have to select another command before it does anything else. So no, clicking furiously at a component because you want to move it but it wants to change the orientation gets nothing done.

Without further ado, I now present the Small Cute Half Bridge. 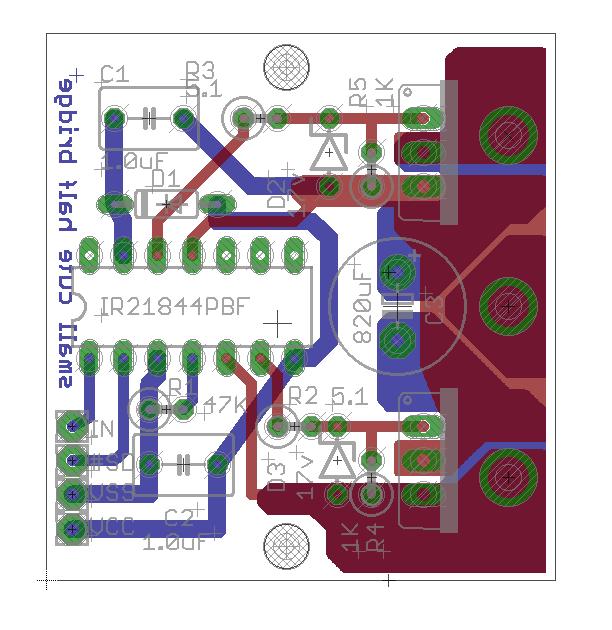 While I figured a good test would be just jumbling every which component together onto a board, making something I could actually use is better. The SCHB uses the IR21844 (previously explored on this site) and drives a MOSFET half-bridge. Half-bridge units like this form the basis of many switching power supplies and motor controllers.

The actual schematic of the SCHB is the jumbled mess:

Making the SCHB was an exercise in device creation. I had to define a footprint, a schematic symbol, then associate the two together into one device. It’s a clunky system that I think could be streamlined, but the clunkiness probably carries over from industrial engineering rigor. I made a 14-DIP and SOIC-14 version of the IR21844 to cover all my bases. I also made the IRFB3077 FETs. Fortunately, knocking the board footprints from existing libraries meant that I didn’t actually have to draw them.

What’s next? Get the board made!

Many PCB companies have online services where they can make you boards from a design. One example is Advanced Circuits, which seems to be a favorite of MIT students. This is where I think the mechanical engineers and manufacturig industry can step it up – where are the online services for fabrication and machining?

Granted that making 3D parts in metal is much more resource and equipment intensive than PCBs or 2-dimensional machining like waterjetting and LASER cutting, but I contend that it’s worthwhile to look into as an additional market for shops, especially as the DIY trade is growing.

Hopefully, within the next two weeks, there will be SCHBs on my desk and ready to plug in backwards test. It’s incredibly small (1.5 x 1.6″), all through-hole, and the FETs can probably handle 25 to 30 amps with no heatsinking.

6 thoughts on “Coming Out of the [Course 6] Closet”