I know I said I’d make this a lessons learned at Motorama 2018 post, but let’s go back to vans for a minute. Motorama 2018 would mark one year since the ill-fated Motorama 2017 trip which left Vantruck in a state of “de-shittification” for months, resulting in the post series ＯＰＥＲＡＴＩＯＮ ＥＮＤＵＲＩＮＧ ＢＲＯＷＮ .  Fortunately, for the past few months, it’s reached a stable plateau, even managing to go to a car show and on several large-object getting trips to New York… 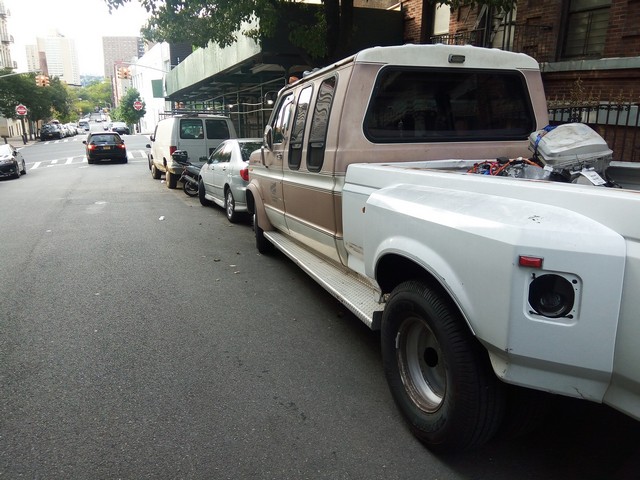 (yes, it IS in fact in the middle of Upper Manhattan… who thought that was a good idea???)

…New Jersey, New Hampshire, and whatever else around here starts with New, as well as being the resident Bruh Can I Borrow Your truck, which has resulted in another two or so trips to New York State and New Jersey. Basically what I’m saying is, it’s been solely responsible for at least 0.0001C of global warming.

So I had to make Motorama 2018’s trip count. Now a year in the making, it was time to close the chapter of making Vantruck less shitty to begin on the journey of making it more gooder. Thus, we begin ＯＰＥＲＡＴＩＯＮ ＲＥＳＯＬＵＴＥ ＢＲＯＷＮ.

I decided the first major salvo would be getting it a fourth gear prior to Motorama. With only 3 speeds in the Ford C6 transmission and the top gear being 1:1 into a 4.10 ratio rear axle, getting the thing to go faster than 55mph was strenuous… not for lack of power, but just for sheer engine speed on the highway. Vantruck’s known repeatable gas mileage was a linear function of speed, more or less: 9 mpg at 55, decreasing to 8 mpg at 65mph and may Al Gore personally lobotomize you for trying to go 70mph consistently – the 7.5 liter V8 spun at 3,200 RPM or basically 80% of its redline just to keep up with the nearest Pumpkin Spice Lattemobile.

There were two major paths I worked with which people seemed to have done. One was swapping the transmission for a type E4OD 4-speed, which was used in Ford trucks in the later 80s and through the 1990s. That would have involved sourcing a functioning (or rebuilt) E4OD and also transplanting over the transmission controller or buying an aftermarket standalone controller. Beyond that, fitting the larger-cased E4OD would have involved moving and making new transmission mounting crossmembers. It seemed overall like the more correct but more involved route – it was not much of a stretch at that point to simply change engines with it by purchasing the entire running gear of a different truck.

The other option was adding a discrete overdrive unit. Up until I started doing this research, I’ve never even heard of aftermarket bolt-on overdrive gears, but hey! They seemed much more common “back in the day” when less transmissions came with anything but 1:1 for the highest gear. They seem to generally work like large drill gearboxes driven in reverse, and are mostly of the deNormanville design, also called the Laycock (huehuehue) design:

Pretty nifty. It’s like an inside-out Roll Cake, for your transmission! The downside was that these things were quite pricy new – a full kit from Gear Vendors, the current manufacturer of these units, was going to run $3,000. My van salon estimated around $900 for installation including modification (cutting and rebalancing) the drive shaft. So in other words, both my options were going to be almost equally expensive with time economy, make-it or buy-it, and convenience tradeoffs.

We all know the real answer is “Tesla swap it” of course – if I had my own lift and garage, I’d probably have just machined my own overdrive box by running a PTO gearbox or some other kind of industrial dongle backwards with giant dog clutch and Overhaul’s old clamp actuator as a shifter. But I don’t – I have what I can do on the ground without a lift, often with snow cover.

After consulting with my vanstylists, I decided to pursue the external overdrive route. Convenience won out in the end, as the installation would be largely bolt-on with only modification of the driveshaft and moving one frame crossmember. I wouldn’t get the benefit of the locking torque converter of the E4OD, but would still see highway RPMs fall by 25% at least. It was going to be 80% of the results for a small fraction of the work of a whole transmission or powertrain swap. The only trick to making it really Econolinical was trying to find a used unit.

I set up traps on eBay and Craigslist and waited a few weeks, but it paid off in getting me a $1,200 unit removed from a truck the owner was parting out after a crash. This meant it must have been moving before the crash, which means it most likely works! 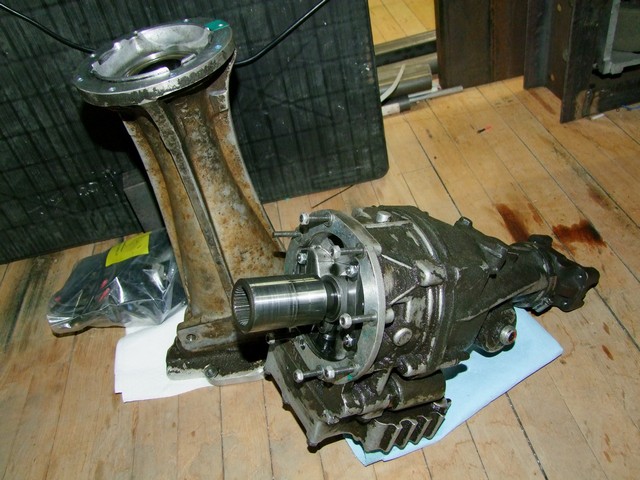 It was just very…. gooey. Obviously something was leaking, either it, or something onto it. Nothing I’m not familiar with! A few passes in the sink with degreaser and a small wire brush and it was as clean as I’d care to get it.

The unit came with the adapter spline, replacement tail housing for the transmission, and a whole bag of spaghetti that was the Gear Vendors auto-drive control system. I’m not going to use it. There’s all manners of lockouts and disables – primarily to keep the unit from activating in reverse gear or under 25-30mph when its internal oil pump would have a hard time keeping the clutches engaged. These sensor wires all end up in phone jacks in the control unit housing. Who picked that connector!?

Anyways, how about a switch and “don’t be a dumbass” for the time being? 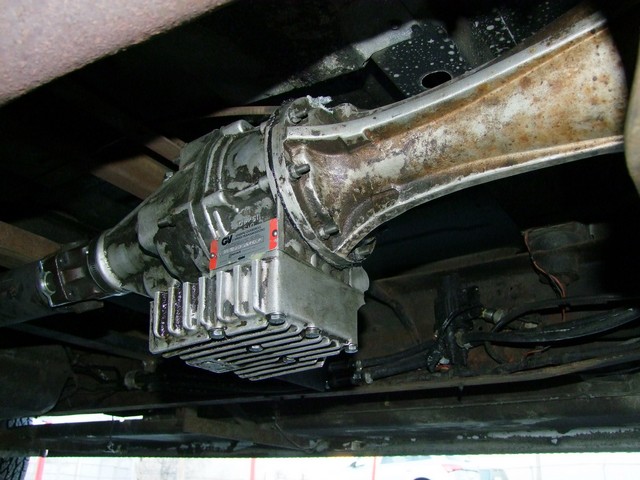 For the first time, I’ve succumbed to the forces of practicality and paid someone for the installation of a major vehicle system. This is the beginning of the end :(

Well, as I said – the previous issues of having to work outside on the ground, in a below-freezing mostly snow-covered parking lot made installing this myself a serious impracticality, coupled with my much decreased time recently from tending to my startup. I definitely contemplated trying to get everything except the driveshaft done, then only having my van salon do those modifications.

But for just under $1K, they put everything together (minus the control system installation, by my request) and in fact actually had an entirely new 2-piece driveshaft made, instead of cutting the old one. Okay, pay for nice things, get nice things… sigh. 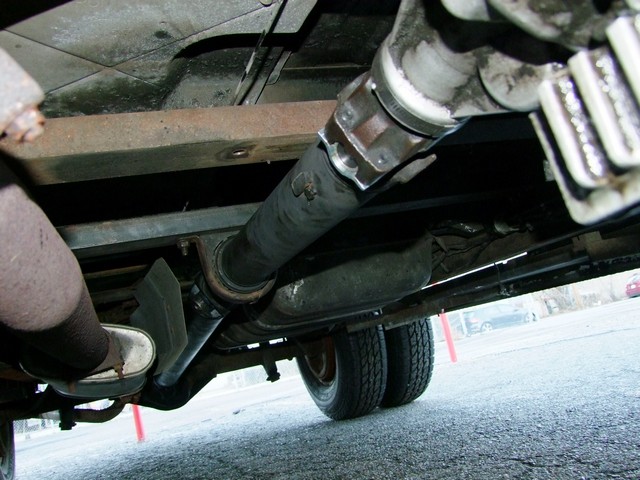 Here’s a photo of that setup, including a new crossmember since the center hanger bearing had to be relocated. On the left: My own shoddy dirt floor chop job exhaust repair. <:( 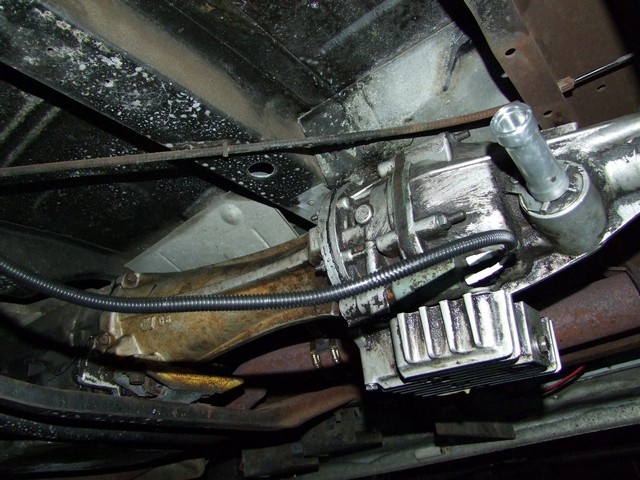 I proceeded to wire the control solenoid up. All it needs is 12 volts to activate the shift valve!

The van salon did discover what had caused the unit to get so greasy: The sump gasket was loose and damaged. I ordered a new one right after the fact, but I haven’t been able to get under there to install it just yet. So for now, it dribbles small amounts of gear oil if I actually try to fill it up all the way. In the above photo, you can in fact see a drop forming.

What, one of my vans dribbling small amounts of oil constantly? Never! 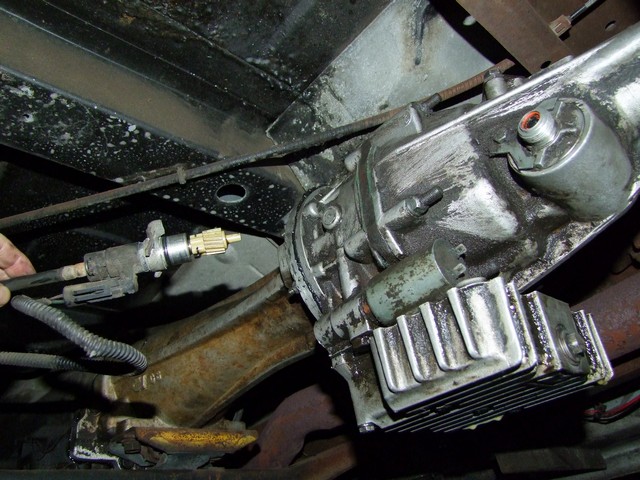 One conundrum was swapping over the Ford speedometer cable drive end to the GM style threaded fitting that Gear Vendors uses. This was a problem to solve later! Road test NOW! 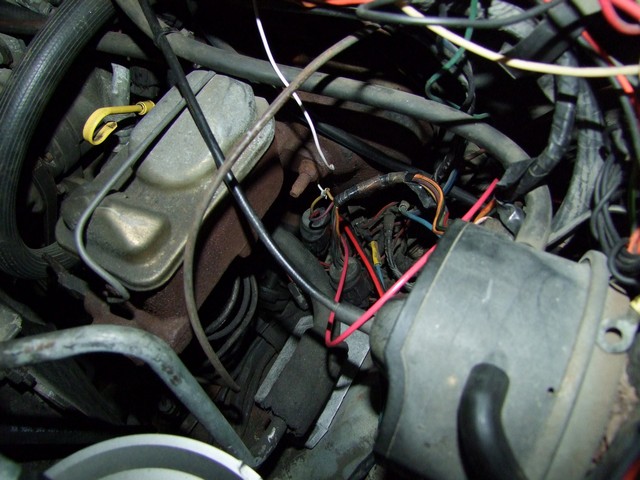 I grounded the solenoid nearby on the frame and ran a Little Red Wire all the way up the chassis wiring bundle which slinks between the frame and body, proceeding to wrap it the wrong way around the cruise control actuator in the process. It enters the cabin with the other aftermarket wiring. 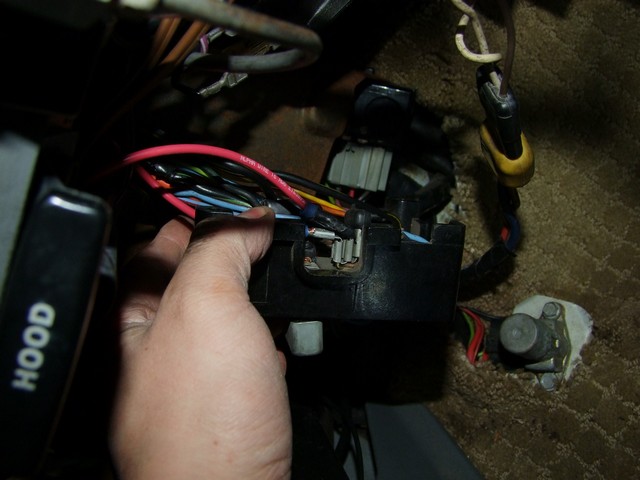 I committed abject electrical terrorism and jumpered it to the fuel pump circuit, which has already been jumpered to… something I can’t remember. Oh boy, this will get interesting when fuse blows. 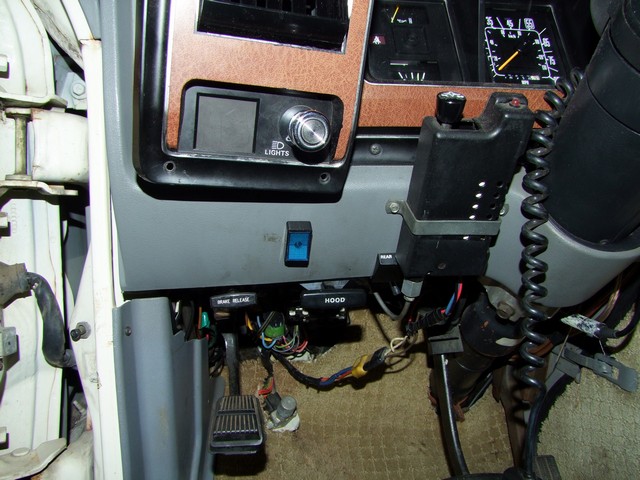 The final connections were made using a spare random switch I had, reinstalled into the famous “What the hell did this switch go to?” hole!

Some people buy or make an elegant on-the-shifter button switch solution, but I found it just as easy to swipe at the dashboard. Did I mention ＲＯＡＤ ＴＥＳＴ ＮＯＷ?????

I used a phone GPS speedometer to get a direct speed reading in lieu of having the speedometer cable hooked up. Basically, get on the highway and flip the switch. The satisfying thunk indicates the unit has activated. At 55mph, the engine RPM fell to around 2,100. The absolutely fantastic thing is that 70mph engine speed is now the former 55mph speed, at around 2,650 RPM. It’s now disturbingly quiet, with only wind buffeting in the cabin. Far quieter than Mikuvan – with its higher wind noise and lesser sound insulation and my fake racevan muffler.

It was in fact now too easy with the torque overhead of the 460 to start going 75mph and up without noticing. This is also where I found out it has a resonant, likely tire-balance related, issue at between 71-75mph. Once you break through that, it’s like crossing the sound barrier. I ran out of testicular tenaciousness at around 82mph and decided to not explore further.

I only forgot to disable it after getting off the highway once – which caused it to fall out of overdrive mode. There’s a sprag clutch connecting the two shafts which forces 1:1 mode if it can’t shift for any reason, and it will pick up again as soon as the input shaft spins fast enough. From what I understand, this isn’t the end of the world, but also isn’t good for the cone clutch linings, so I’ll just have to Get Good at remembering to turn it off. (I didn’t mess up once during Motorama!)

A couple of days later, my speedometer parts came in the mail. 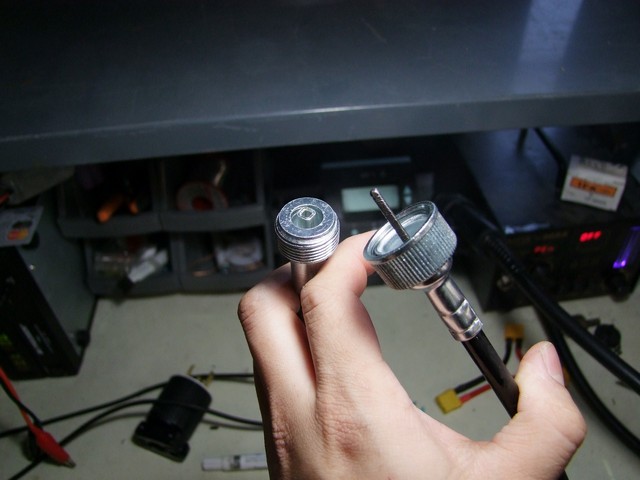 I bought a common 20″ GM style extension cable which has the 7/8″ threaded coupling on both sides. GV gives you a big bucket of hardware to adapt to like every possible speedometer situation, but the seller didn’t end up having to use the extension cable originally and so did not include it. I literally got a chunk of the speedometer cable of his truck, which, while well-meaning, was less than helpful. 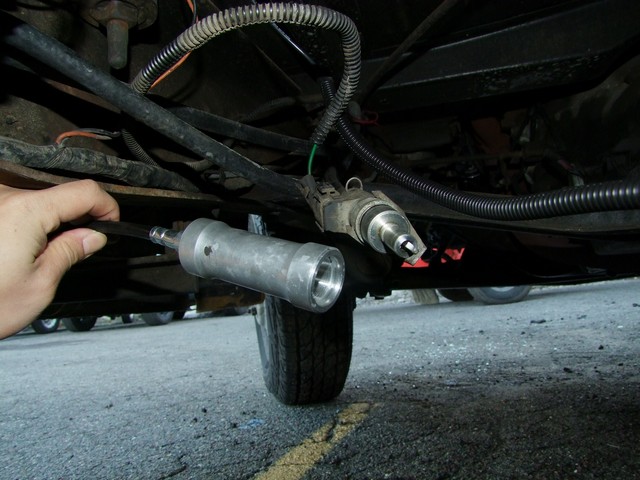 The Ford speedometer gear comes off with a small clip and the fitting behind it gets shoved into the aluminum adapter provided by GV. There’s nothing holding these two together except the friction of two O-rings, which is fine I guess.

The GM male fitting tightens into the other side of the aluminum tube. 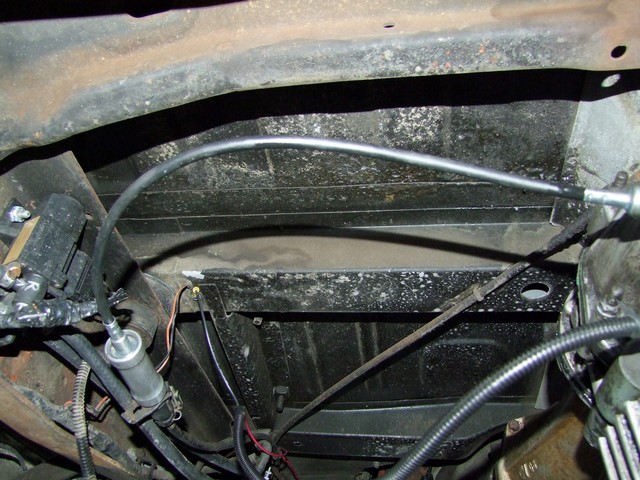 The female nut side of the GM cable then tightens onto the fitting on the GV unit. I just kept everything held up with a few cable ties after that, and we’re done here. 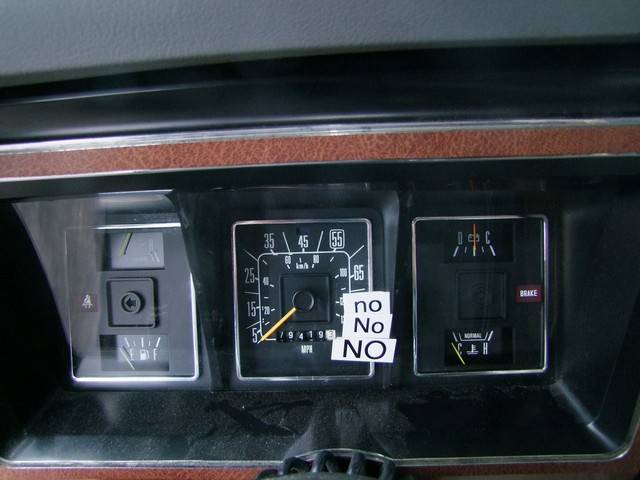 And to remind myself of my escapade…

Was it worth it? In terms of reducing the wear and stress on the engine just trying to puff along the highway, yes. Economically, with around $2,200 spent all up, it would at first glance take around 15-16,000 miles to pay off at around 2.69 a gallon average and around 9 MPG. But then I have to remember that 9 MPG is now at 70-75mph instead of 55… With more comprehensive testing, 60-65mph driving results in slightly over 10 MPG so I bet 55mph is going to see above 11.

However, I’m never going to bother going 55mph again. The gas mileage argument is really kind of moot to me also. It was just good to move at real-people speeds.

All of this happened in the 3 weeks before Motorama after I got back from CES and had a brief escapade to Atlanta. January was a crowded month. But I’m proud to say that Vantruck Justice was achieved! 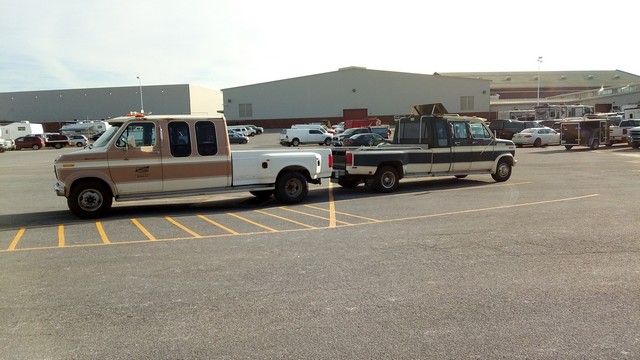 I met up with Alex Horne for ＤＯＵＢＬＥ ＶＡＮＴＲＵＣＫ ＰＡＲＴＹ . Stay tuned for how Clocker did at the tournament, and how that affects my strategies and design paths for Overhaul!