The rumors began shortly after July, when Science Channel announced it was going to pick up BattleBots after ABC unceremoniously shat us out in favor of a …. boy band show? Well fuck me sideways with a fracking well, look at how that turned out for you guys! The rumors intensified in November as discussions and negotiations were clearly under way, and reached a crescendo in January, each week leaving us wondering if “next week” was going to be it.

Well, now they announced it. Crap. Now I actually have to finish something!

Overhaul’s upgrades have been in in the works – albeit slowly. After season 2, I had a whole list of changes I wanted to make and “design regrets” resulting from the extremely fast build season and required turnaround time I wanted to address. Really, I (and a lot of other builders) see #season3 as a chance to do Season 2 “correctly”, addressing things that didn’t go the way we want or designs that could have been done better. And frankly, anybody trying to build from scratch for the season now is either a dumbass or more of a man than I 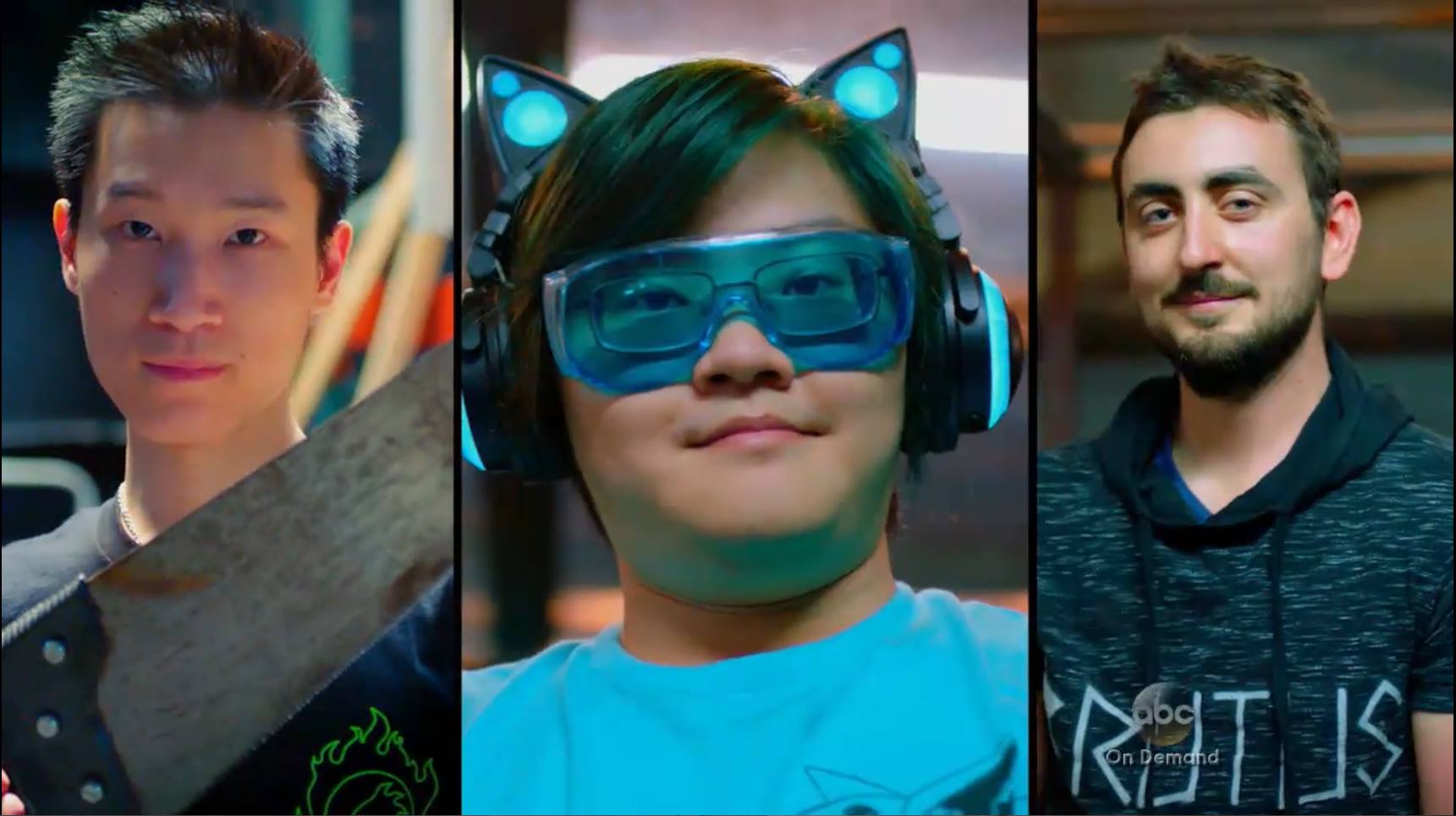 So that’s where we are now. The story of Overhaul upgrades actually goes back to right after Season 2 ended, and starts with what is basically the last large mechanical assembly that was designed, the clamp actuator…. meaning it was the most rushed and horrifying.

Ball screws were a bad idea. I was attracted too much to the promise of 90+ percent transmission efficiency, but they ended up being too fragile and also had the nasty habit of backdriving – made most obvious in my match against Beta. During the following 3-bot rumble with Sawblaze and Road Rash, the ball screw stripped out almost completely and began acting like an Acme leadscrew anyway. 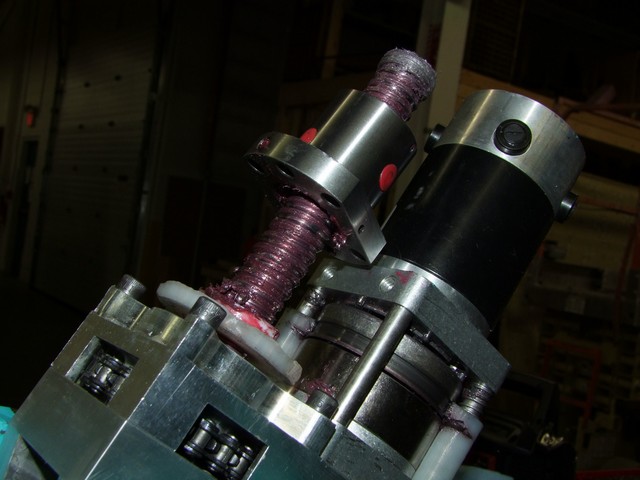 Trust me, that hurts me viscerally to look at.

There was also a confounding problem with the actuator design and the clamp arm. In general, the actuator ended up too bulky to hide effectively without making the head ungainly. Because of the positioning of the motor and the bulkiness of the ball screw, I chose to simply add a little ‘horn’ to the clamp arm (the protrusion close to the pivot point) in order to protect the actuator motor from being landed on if Overhaul got flipped over.

In order to get the clamp running again quickly in case Season 3 happened relatively soon (*ahem*) and to explore the large Acme threaded rod market, I actually designed and machined up a retrofit using 7/8″ Acme screws and nuts – the odd size was for the easiest fitment to the existing actuator bearings, since the root of the 7/8″ Acme thread form required minimal machining to fit.

Also, I found the nuts on sale on eBay for like $20. There’s an engineering justification for every spur of the moment purchasing decision. 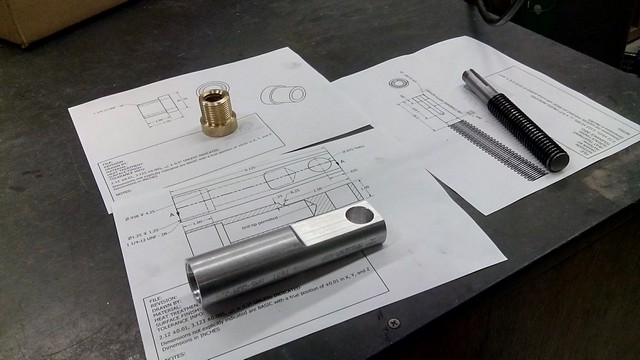 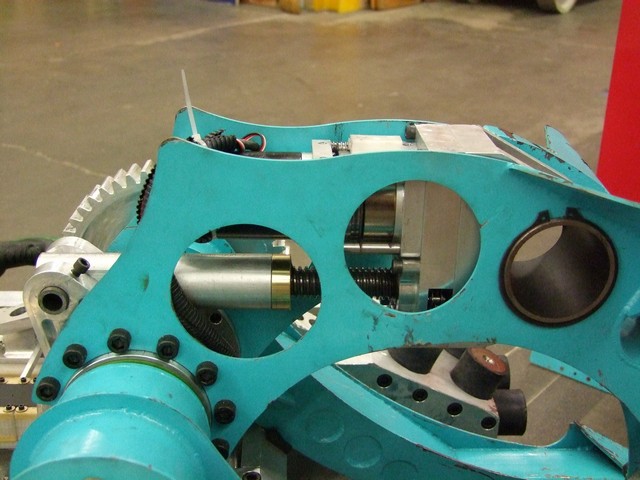 I wanted to redesign the whole upper half with a new acme screw based actuator to solve this. Furthermore, I wanted to move from a live-screw design to a dead screw one, where the actuator contains the mating nut within large carrier bearings and simply rides up and down a stationary screw, which is the design I’ve historically used for Überclocker.

The premise went from using the higher efficiency transmission option to the more durable and simple one and just overpowering the everloving fuck out of it to get my desired closing forces. As a large portion of combat robots revolves around the latter, it was clearly the way to go.

I cloned the Overhaul 2 CAD model into a new directory so I can start messing with everything. Here we go! 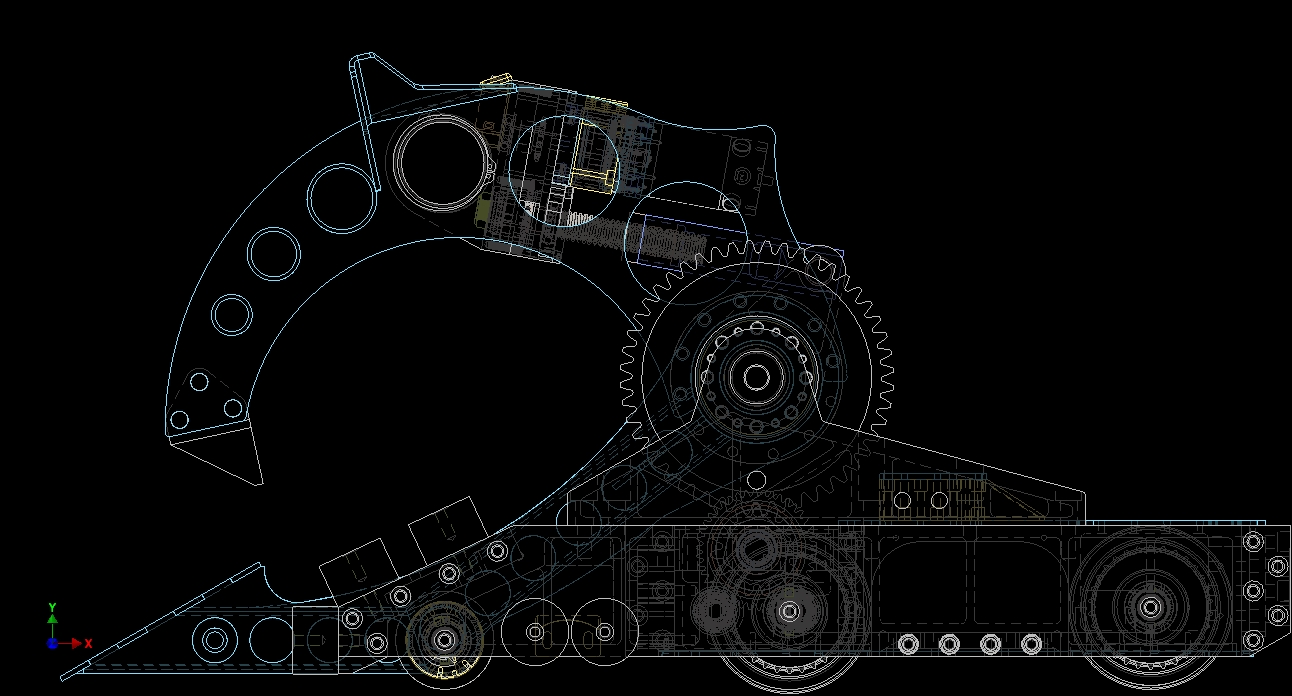 This is the actuator in its current position in the bot. 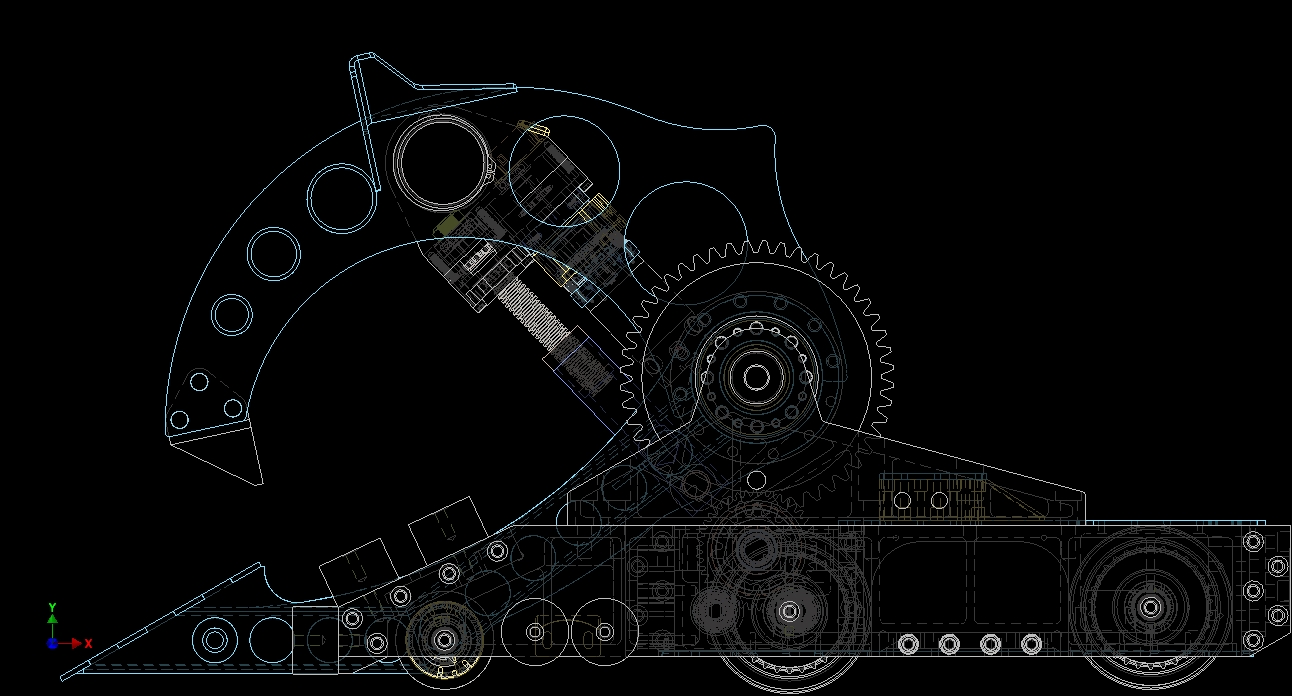 I wanted to try and see if I could move to a pull-stroke closing like Überclocker has been running. In general, the answer is “not really” due to how far the actuator will stick out into the ‘grabby zone’. In Überclocker, I sacrifice a whole lot of leverage to position the actuator almost vertically so it’s much more out of the way. I wanted to not make that sacrifice for Overhaul unless I had to, or if it were super convenient. functional requirement: be lazy 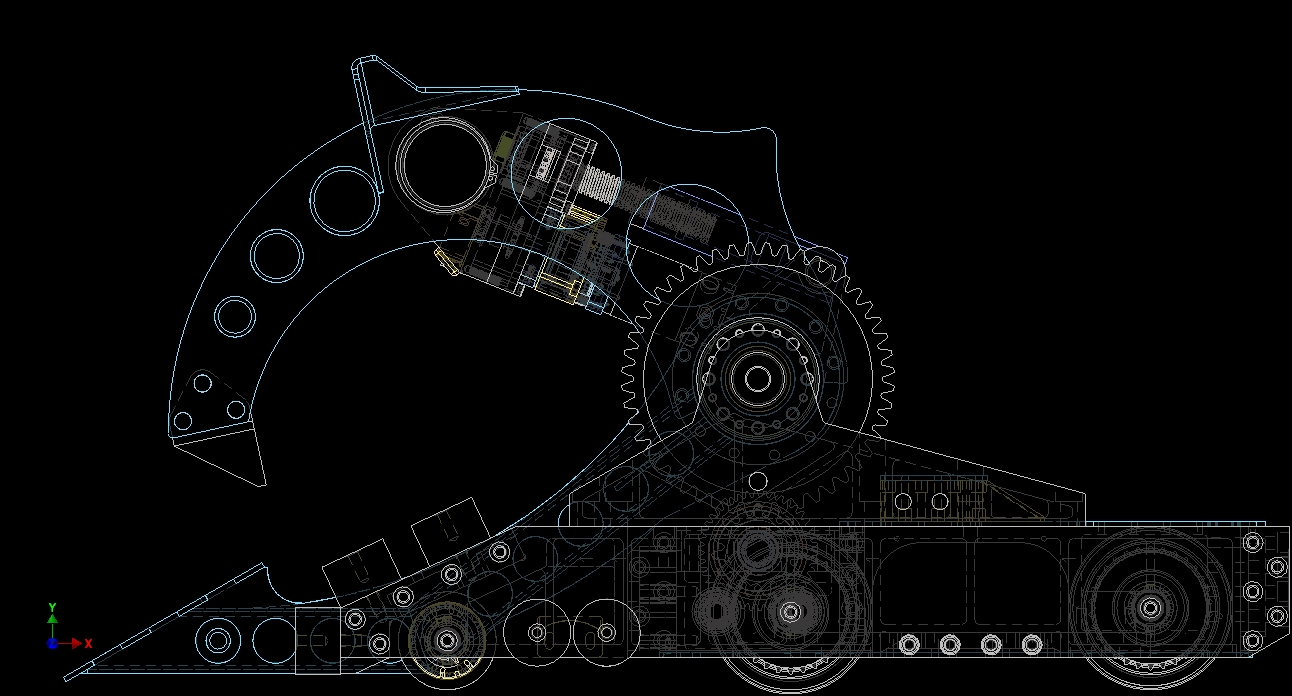 I also investigated the idea of flipping the thing upside down. In this configuration, if the trunnion tube is made non-offset (inline with the leadscrew) the motor will unfortunately hang down very low into the ‘grabby zone’ and be vulnerable.

All of this position testing though was enough knowledge for me to begin hashing out the next part of the design. 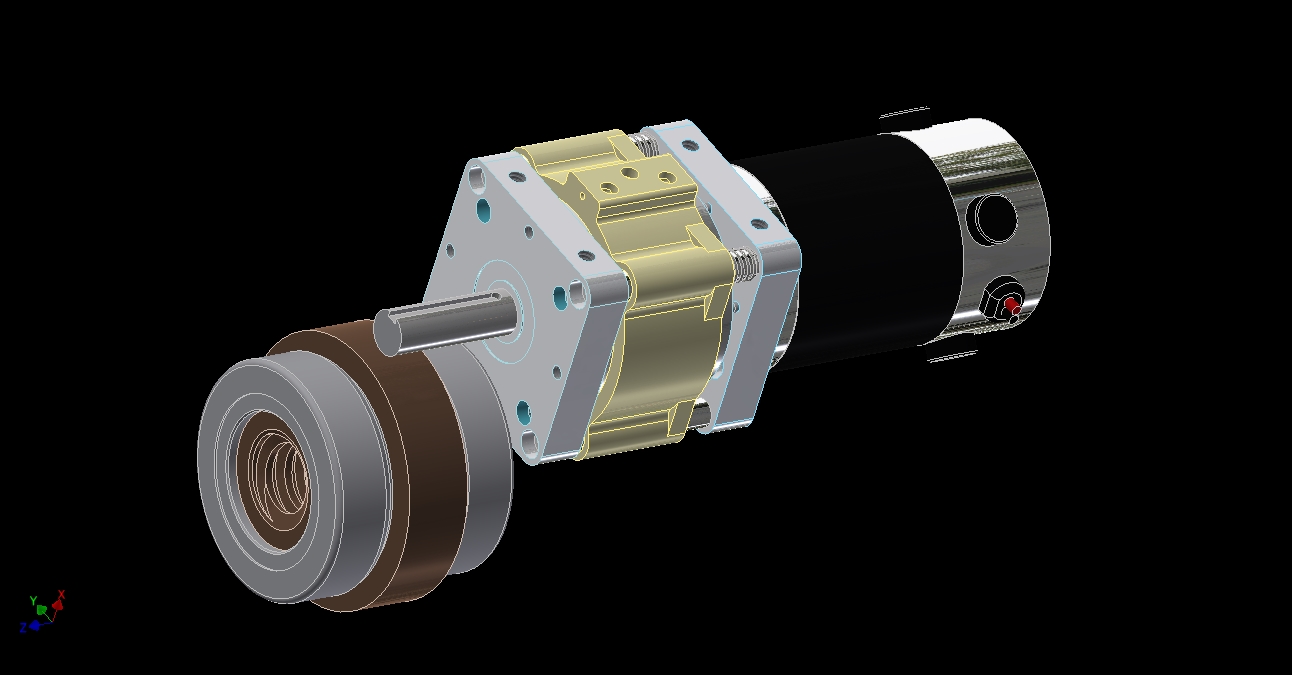 For now, I just imported the model of the P90X gearbox which was never quite implemented. Into the same model, I imported a bearing I bought on McMaster-Carr which I got curious about while specifying new thrust bearings for the this thing. 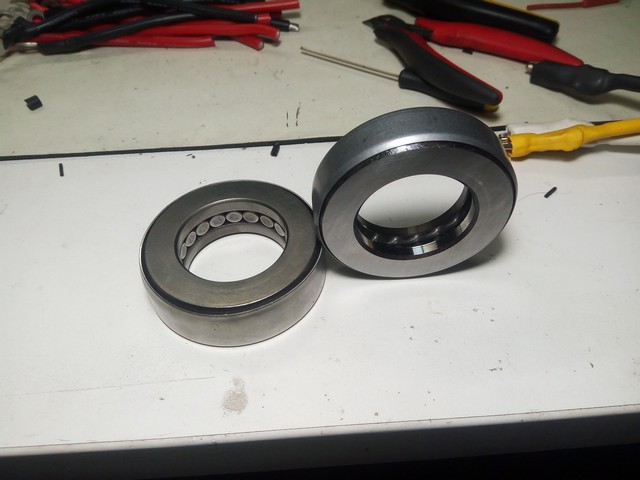 These are “one piece” ball and tapered-roller thrust bearings, so-called since McMaster usually sells thrust bearings in little kits of 2 washers and a basket of round things. Don’t be fooled, though… the “one piece” part is just a stamped sheet steel shell that holds the two bearing halves vaguely together.

The one on the right is a ball bearing based one, and the left one is a tapered roller bearing which is basically tapered the ‘wrong’ way compared to a normal one. This means it can support almost no radial load but a ton (or approximately 7 tons) of thrust load!

I found the tapered roller bearing one a little janky, though. The full roller complement meant it had quite a lot of drag when rotating, and the packaging was a good 3/4″ thick. There’s also no way I can reasonably use its 14,000 pound rating …. and that’s an industrial rating, mind you, meaning it will happily do that for thousands of hours and not just 3 minutes. So I chose to move along (for now) using the ball version, which only has a …. 7,000 pound dynamic load rating, but was thinner and lighter. 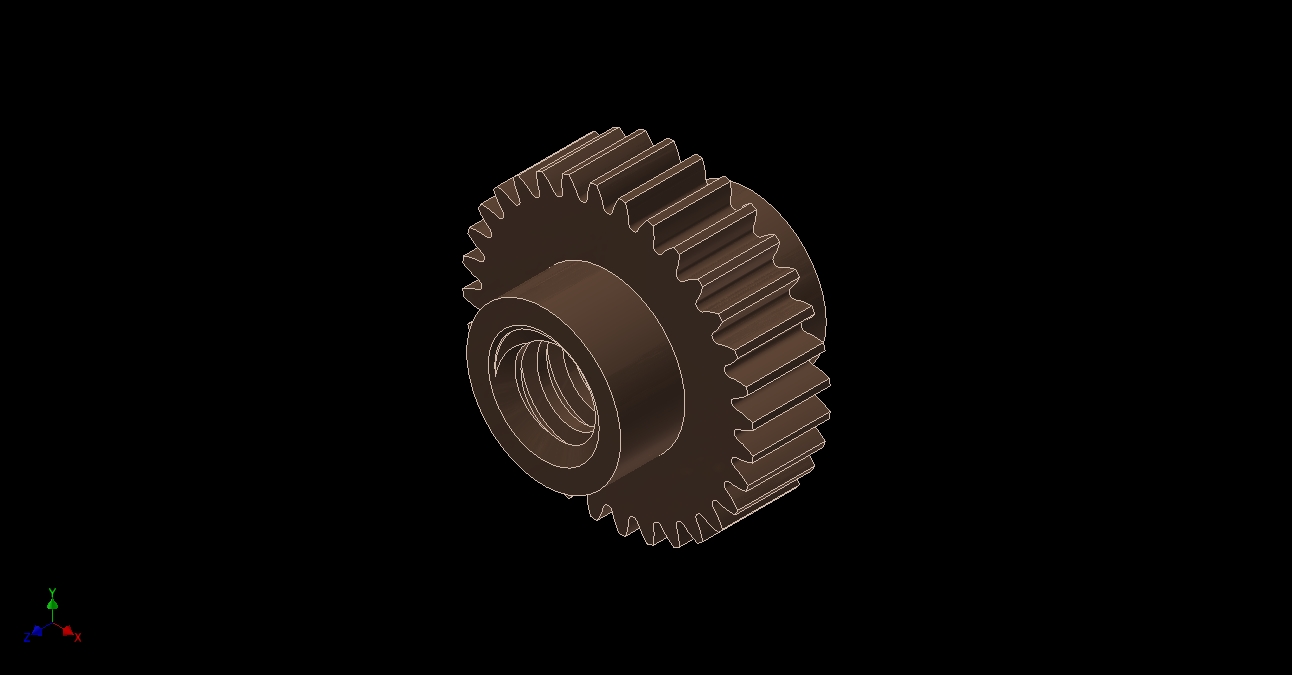 The brown object in the middle is a stock round Acme 1″-4 nut that will either be machined as a gear (quick modeled as teeth here) or have a machined ring gear shoved around it with a thermally-enhanced intereference fit (LN2 the nut, bake the gear, shove them together and run away fast)

You might be wondering what the plan for radial loads is, since ostensibly I have two thrust-only bearings designed into the thing so far. The fake answer is that the leadscrew nut, being bronze, will just ride in the stationary bore of the thrust bearings, since the magnitude of thrust loads will be much higher than potential radial loads on a stationary leadscrew.

The real answer is “yolo”. 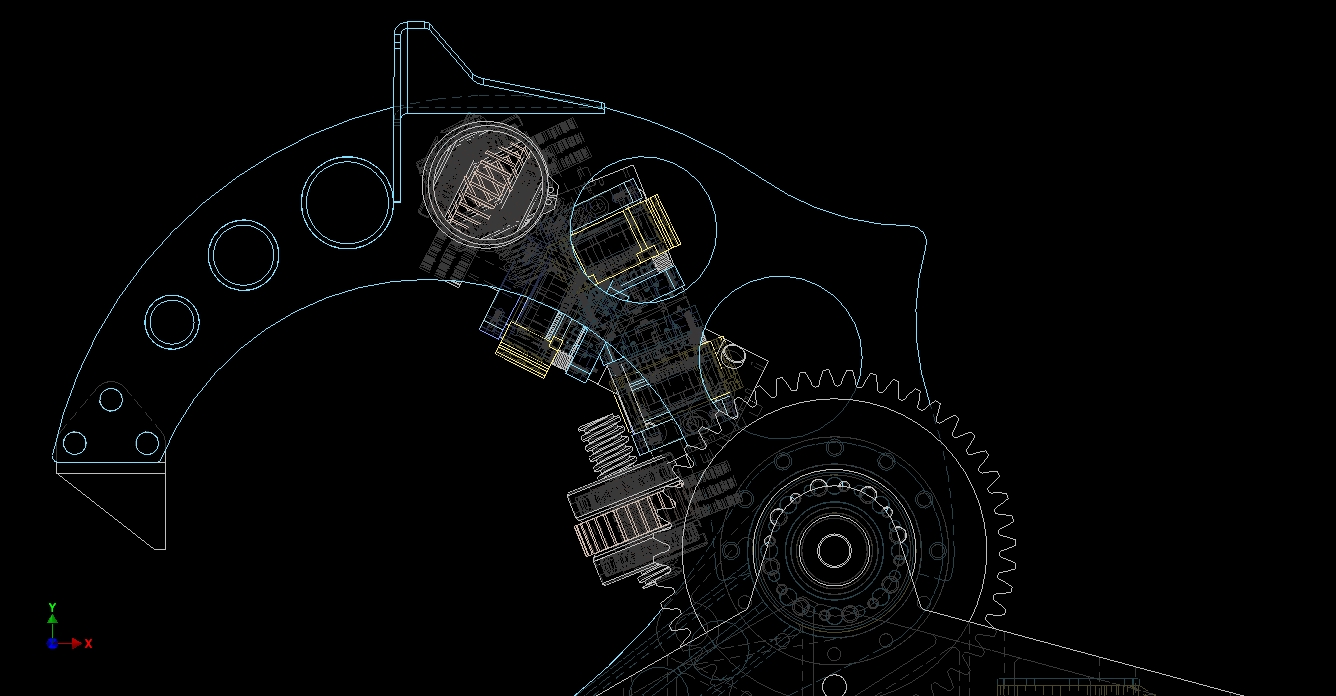 Here I am playing with actuator positions again. The “pull-to-close” position in this photo mimics that of Überclocker.  I still felt that the important parts were too exposed here. 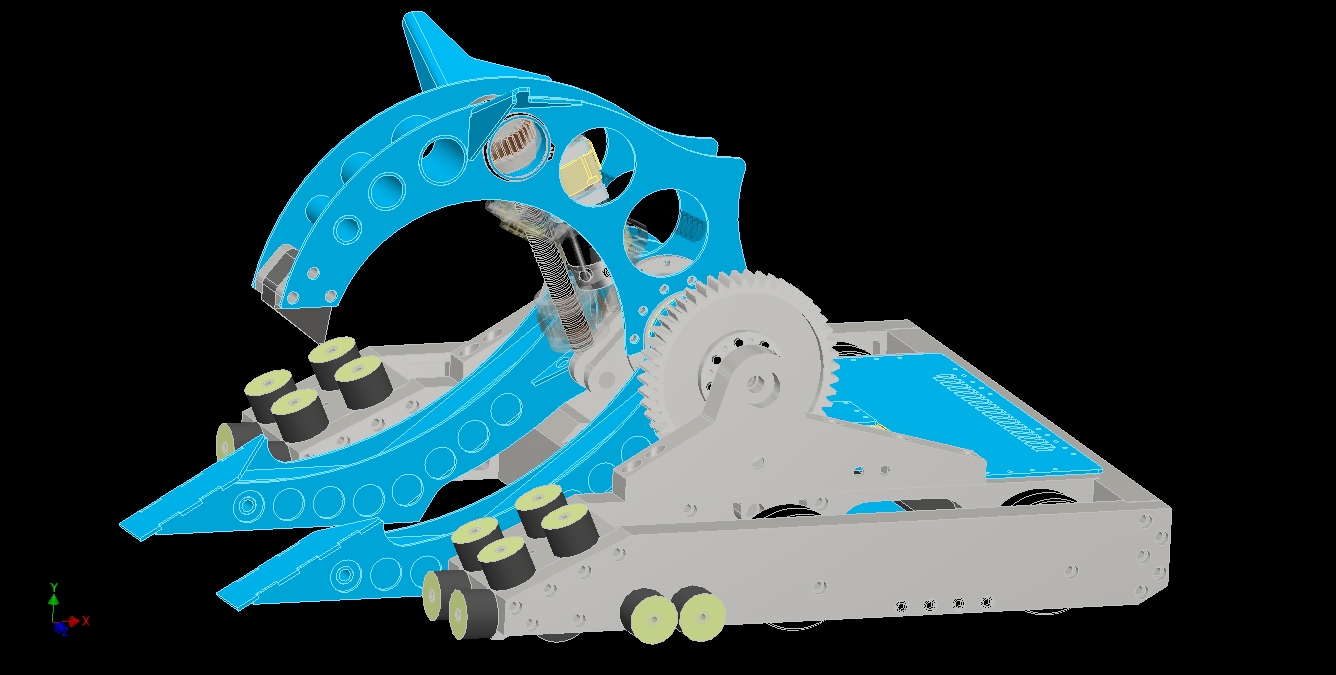 Another attempt just flips the actuator upside-down and exposes pretty much only the leadscrew. This was at least tolerable in conception – something being mashed into the leadscrew (which could also be shielded) might still leave me enough travel to get a good grab. 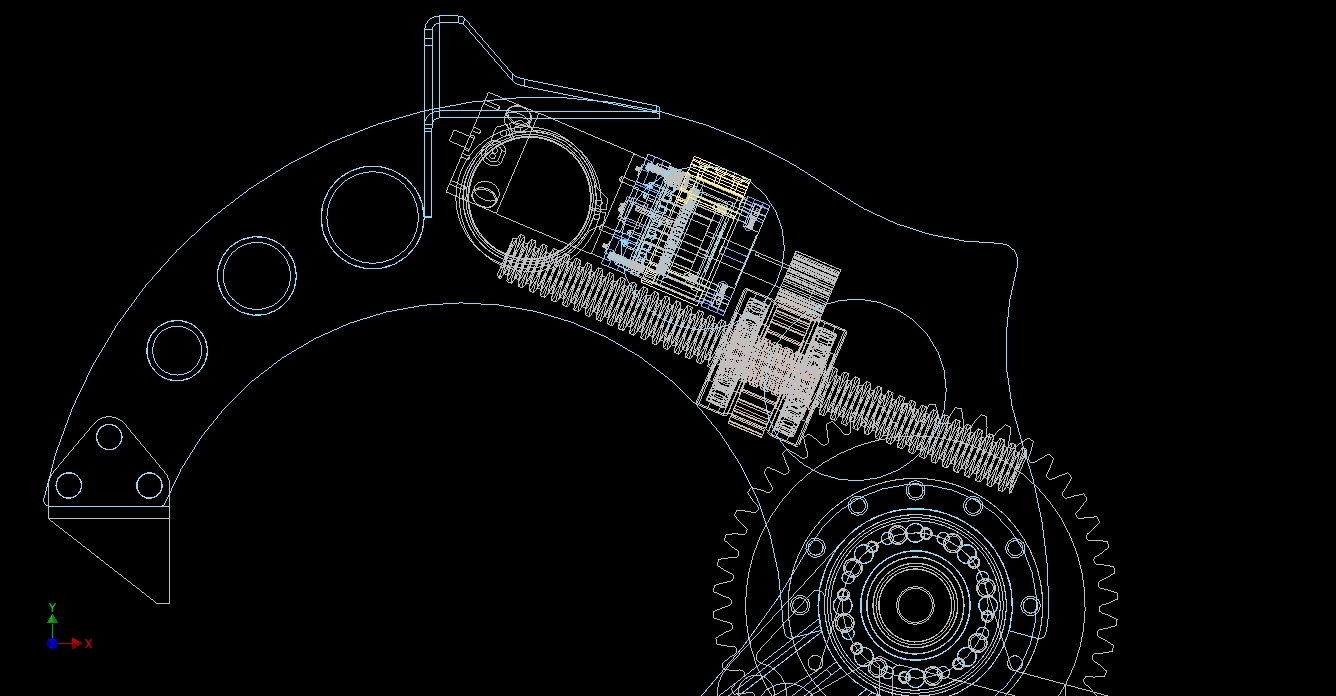 Okay, but what else did I learn from Season 2!? That if you leave something important exposed…. say, a master power switch or similar, and run on the assumption that the chances of something getting into there and causing damage are very low, then it will happen to you 100% of the time.

So I gave up the “pull to close” actuator position in favor of just trying to keep the leadscrew short and fat in order to maximize its column rigidity.  The bonus upside is it woud let me keep the existing center hub between the two arms if need be.

This positioning candidate was actually pretty favorable. I could see how the clamp arm geometry might be changed slightly to better accommodate it, and also permit it to use a relatively short leadscrew 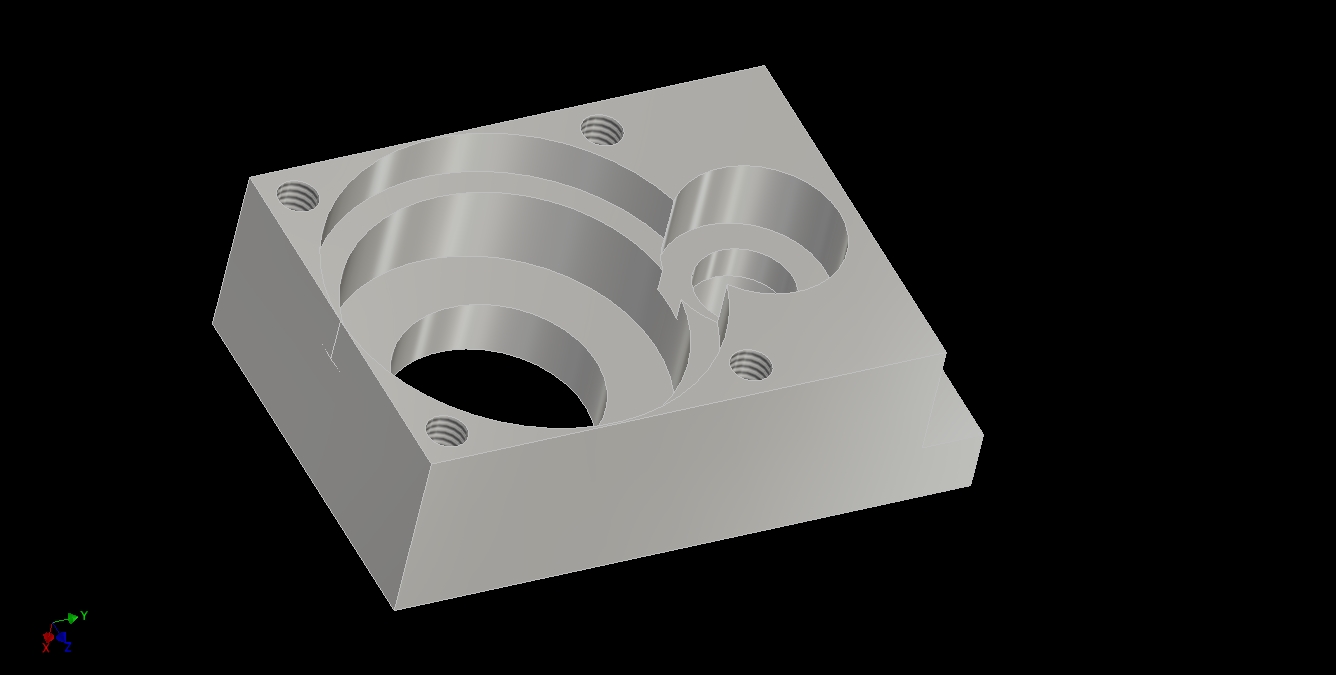 Using the geometric constraints put forth by the toy component placement,  I basically wrapped an aluminum chunk around it. The cavities are for the gears and bearings. 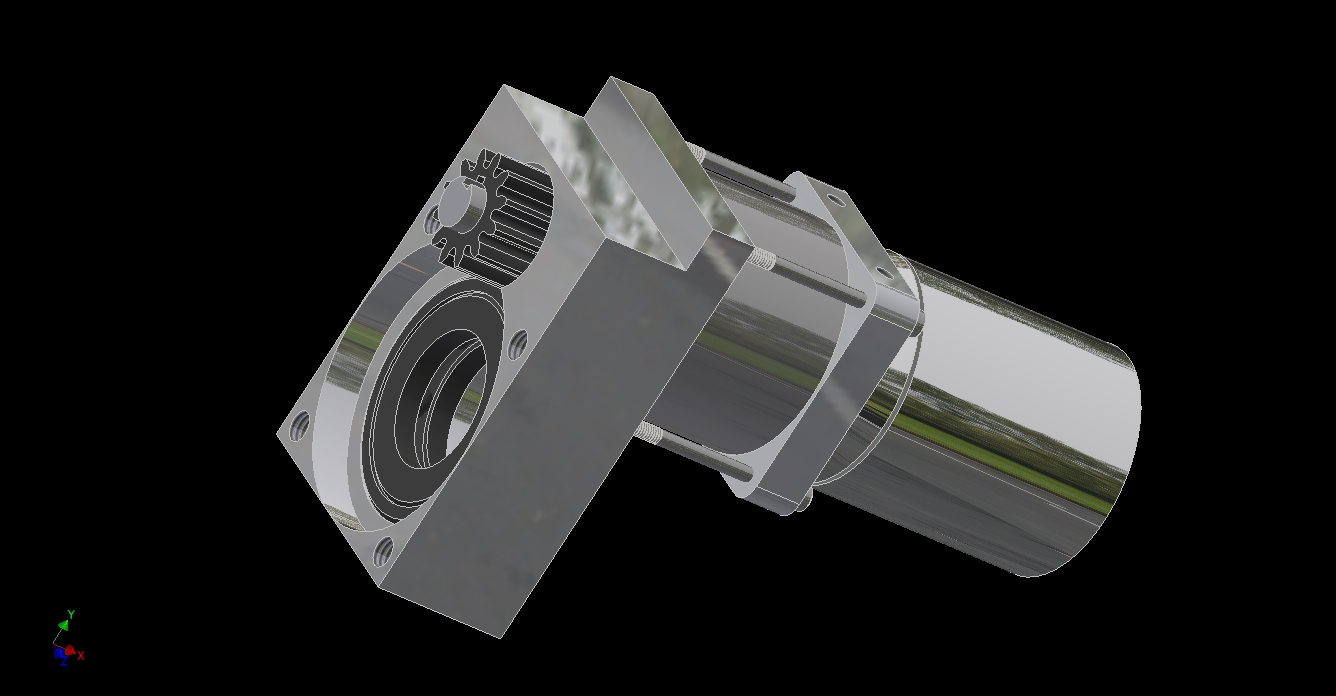 I changed the design to an “embedded P80” to save length. The clamp motor is being moved to brushless, meaning Overhaul will be completely powered by questionable Chinesium. This time, since the Acme screw will not backdrive, I don’t have to hold the stick to apply pressure to the clamp arm any more, making it more Clocker-like in driving. Furthermore, this also affords me the opportunity to overpower the actuator while keeping a high gear ratio for force application. Überclocker’s current actuator is a regular 36:1 geared 550-class drill motor run at over 2x nominal voltage for moar powar – the short duty cycle of a grab and lift haven’t caused motor burnout problems.

A couple of different brushless motors could fit on this gearbox – right now, the SK3-6374 motor is in for modeling purposes. 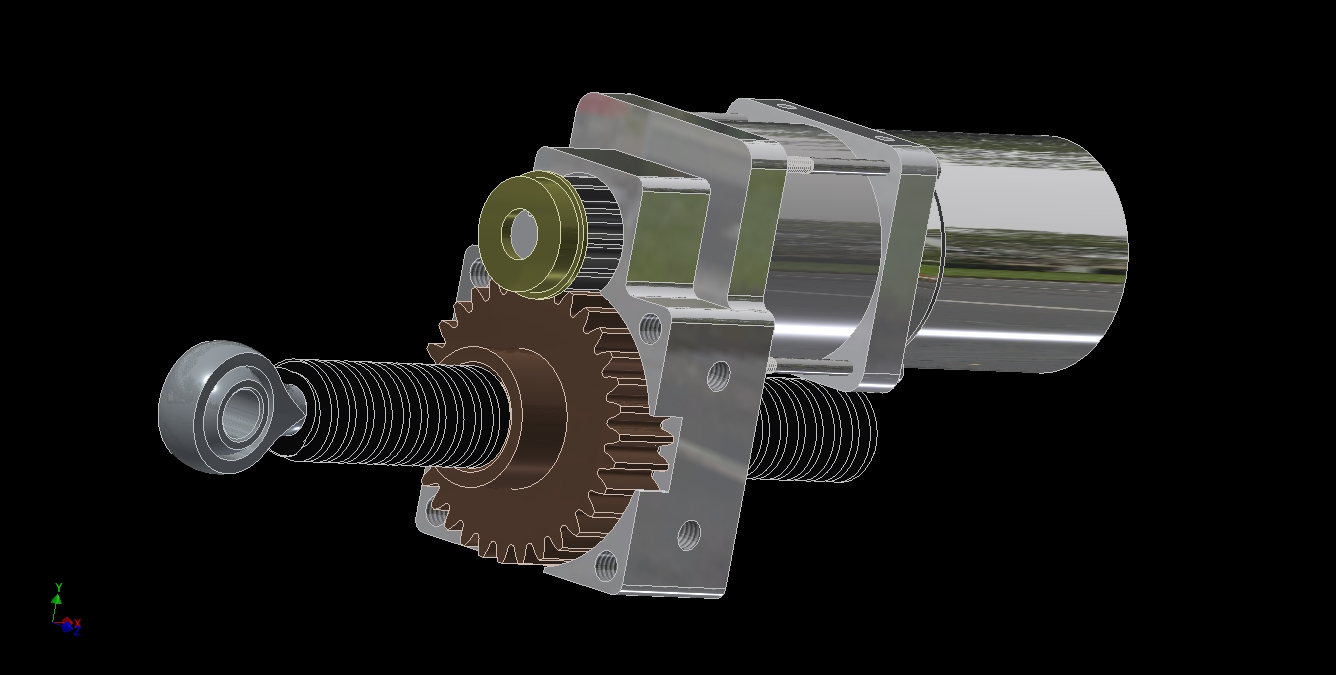 Adding more parts and thinking about how to interface to the rest of the bot. The large rod-end is a convenient way to join to the wrist pin in the lift hub. 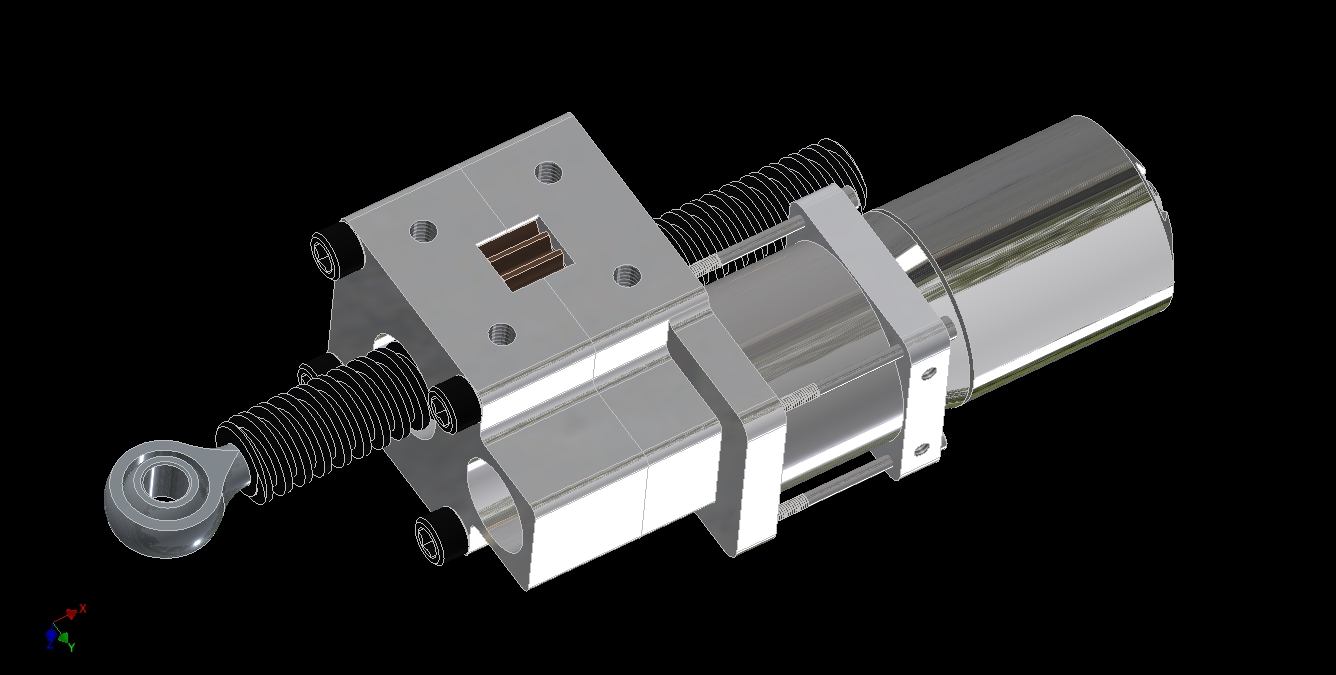 The design is more or less finished here. Those 4 square holes in the side are actually on a 2.25″ bolt circle, so four 3/8″ screws on each side will fasten the actuator to machined trunnion plates. I may end up making 2 of them dowel pins for shear strength and leaving only 2 as threaded holes. 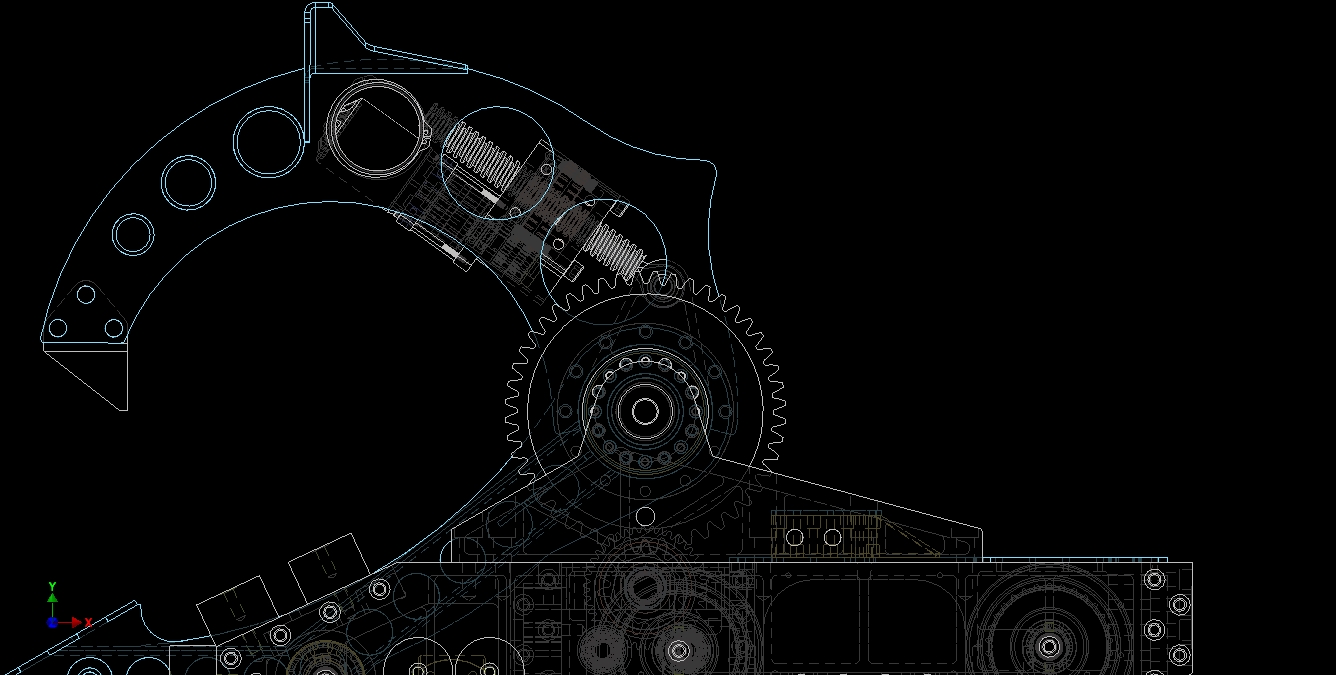 With the new much more compact design, I was able to get a happy result for placing the actuator within the head. This was a good state to reach – I now have a solution where the trunnion bolt holes line up with the circular arc containing the patterned circular cutouts which Overhaul is known for. As a result, I can just hijack one of those holes (appropriately repositioned) as a trunnion axis, much like it is now.

All of this work occurred in the late December to mid January timeframe. I receive the new actuator billets and custom leadscrew nut back from my Chinese contract manufacturer this week.

In the next episode of Overhaul’s Improbable Makeover?, I travel to Motorama 2018 with Überclocker in order to practice driving and strategy – and learn some disturbing new information which might disrupt my #season3 ambitions…

2 thoughts on “My Life is Ruined Again: BattleBots Season 3 and the Triumphant Return (?) of Overhaul”